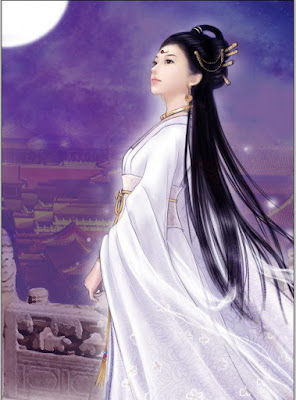 As written in the previous post, I dreamt of this story (haha) during my heavy bouts of Goblin watching. It won't be very long, only 3 chapters. I hope you enjoy it! I will try and finish it quickly. It's a little different from my usual stories and I'm a bit rusty.  I would love to hear what you guys think!


Ever since I was young, I knew I was strange - but it was only much later that I knew how very strange I was. You see, when I was a young child, I would see a date and time flash across a person's face. It was when I was seven that I realized that that date, that time, was the person's death. The first death I saw belonged to my father.

We started traveling - my mother and me. My mother was a really good cook, she had a makeshift stall and we travelled across towns and cities. Sometimes, I wondered why we did not settle down someplace and have a small food stall - it seemed easier as compared to the endless winding dusty roads we set upon. It was also only later, when I was older, that I realized she had to keep traveling because my father had left with her one concept of home, and she could only remain on the road.

Now, I do not want you to think I had a sad life. Contrary to it, my mother was warm, loving and generous. We never made much, but we had much. We would feed the poor and homeless with the little excess we had. The sky was our home, the stars our warmth.

Of course, nothing lasted forever. I could see it already on my mother's face.

The only thing I could not see was my own date.

Before that though, mother and I had a very strange customer one day. We weren't even open for business. We had made a makeshift tent by a lovely clearing next to a river. There were trees protecting us, and a full moon, very full moon above us.

I had caught two fishes and was cooking it above our camp fire. It was then we met this strange visitor - who seemed to had come from nowhere.

He had pure white hair that shimmered under the moonlight, a kind, very kind face. When he smiled, it seemed like the stars had came to dance in his face. He wore white robes with silver embroidery and there was no trace of dirt on him at all.

As was natural when we met strangers, mother offered this elderly gentleman some of our fish. She brought out some of the wine that she made from the previous town and we had a little dinner party. When it seemed like even the moon was going to go to sleep, the elderly gentleman suddenly stood up and said he had to go on his way.

I wasn't really sure I had remembered this clearly since mother had let me drink a little bit of wine. But, I remember he turned to me with a smile and said, "You will have a choice. One day, close to death, if you hold on to the person and ask him to save you, you will live. If not, this life as you know it will end."

"What person?" I asked, confused, "How would I know which person?"

The response was the strangest of all. The old man gave a deep hearty chuckle before he seemed to disappear, "The most beautiful person."
After he disappeared, I realized he did not have a death time.

Mother passed away when I was twenty. She had a peaceful blissful death - she went in her sleep, with a smile on her face. I imagined that father must have been on the other side of the bridge, waiting for her. Mother was an exceptionally kind person in her life, so I was sure her afterlife would be smooth.

In some sense, it might have been a relief - for in the fifty years after that, I did not age. It seemed that time had stopped at twenty for me.

I continued my life as always - traveling, cooking, traveling.

One day, I got lost in a forest. A very thick forest. There was a mysterious fog suddenly and I had tripped and rolled down the steep slope.

I thought, is this it? Is this finally the end?

I actually looked forward to the sweet darkness that would fall upon me. But, I did not black out - at the bottom of the slope, I felt the deep pain in my ribs and chest, my breathing was heavy - I must have broken tons of bones.

But, I was still awake, conscious and I saw a pair of black shoes. Somehow, my face was able to turn up, and my eyes met the milky way, eyes that were like the milky way - so dark, but yet luminescent.

It came out of me before I thought of it, "Save me."

When I did finally black out, my last thought was this, He is the most beautiful person. 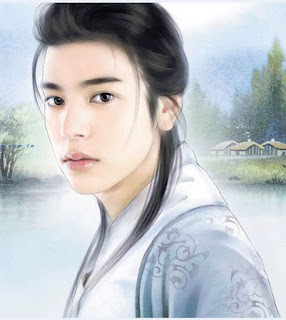 I did not expect to see him when I wake up. But, there he was, in light gray robes, his face cold and impersonal, unreadable. He was looking at me as I awoke.

I was pleasantly surprised to feel no pain when I awoke and thus stretched my body. There was no signs that I had fallen down a steep slope.

I turned my head towards him and asked, "You mean the death time?"

A faint glimmer of surprise passed his eyes, "You can see the death time?"

I nodded, then moved back slightly, "You are not going to take away my life after saving me, are you?"

"This is a sacred place," He said simply, "I did not want you to stain it."

Then suddenly, he paused and sternly instructed, "Don't move."

I naturally froze as he came closer and closer. I could see his face even more clearly now, a lovely aquiline nose, red lips.

He bent down and picked a flower next to me.

"I was waiting for this," He said to himself as I watched the flower float in his palm. As he was about to disappear, he said, "If you want to live, it's best we don't meet again."

Sometimes, I wonder why I made that choice - to live. Maybe a part of me, believed that there had to be a reason for my strangeness, and I wanted to find out what it was.

But, another ten years passed, and that curious part of me was slowly, but surely fading out. I had already lived a long life, I wondered when my road would end.

I no longer got surprised or upset when I saw death times flash across people's faces - people live and die, it was a natural part of life.

So, I did not know what possessed me - but when I saw the exact present time flash across a little girl's face, I immediately grabbed hold of her and didn't let go.

At the next second, a flower pot dropped from the upper floor above us. I heaved a sigh of relief - and then, my eyes widened, now there was no longer a death time for the little girl.

She had fallen unconscious in my arms at the shock, but she was fine. Before I could fully react, two pairs of strong hands grasped my own - my heart nearly died when I saw they were wearing a horse mask and a ox mask - weren't they the guardians of the underworld?

"Bring these two back," The horse man said.

"But they aren't dead," The ox man replied.

The horse man shook his head, "They can't be mortals since they don't have death times."

The next thing I knew was a deep sleep.

When I awoke, I was in a grand silver hall - I could feel myself being carried forward to a throned figure far away.

I did not have to be instructed to kneel when I reach before the throne. There was no strength in my legs.

A beautiful figure in silver on the throne.

Eyes of the milky way.

Email ThisBlogThis!Share to TwitterShare to FacebookShare to Pinterest
Labels: A Heavenly Dream, fiction