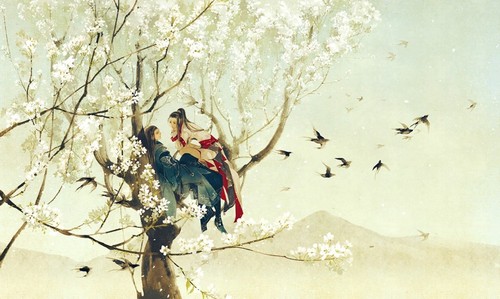 After my hiatus, I have actually re-read the translations from the start again and there were parts I got embarrassed but also parts that I was really emotionally touched. Most of all, I really remember each and every step of this story's translating journey.

I feel very lucky to have been able to translate this story and am really glad that even after re-reading it months, and maybe years later one day, it still leaves me feeling so full in my heart.

I hope you will enjoy this epilogue, which is particularly sweet.


Since the previous time when I failed to go for the pill testing, Phoenix had completely grounded me. It has been half a month since that fateful day. No! I should say it has been fifteen days, a whole fifteen days, he really is too domineering and I am really too pitiful. Those who can see will be sad, those who can hear of it will weep.

I was in the study and grinding till my face was about to drop into the ink slab when I heard a small demon announcing from outside, "The Moon God requests an audience with the Great One's Mistress. May the Great One give his directions."

One phrase and I became furious. Why was the Moon God finding "the Great One's Mistress", why did the demon seek "the Great One's directions?" This was truly overlooking my presence! Of course, I could only be angry in my heart... habit was indeed a frightening creature.

"No audience," The Great One cleanly spat out two words. His head did not even raise up and he continued writing.

"Yes," The little demon retreated. Quickly, he returned, "Reporting to the Great One, the Moon God said...said... there needs to be a reason for not being able to see......"

Phoenix steadily paused his brush, he still did not raise his head and said, "Mistress is pregnant and needs rest." The little demon received his instructions and left.

I was actually dozing off when I suddenly stood up in shock, "When did I get a baby?"

Phoenix raised his head, lightly looking me in the eye and replied, "Soon." I suddenly felt my forehead turn black.


In half a moment, Phoenix finished writing, then he personally carefully pasted it on a parchment, then personally hung it in the middle of the bedroom, facing the head of the bed.

I looked at it. On the paper were four words dazzlingly written - "Heaven Rewards Efforts Justly". Thus, not only did my forehead turned black, my face also became black.

Later, it was not clear why but Phoenix also started to be melancholic, and finally he became depressed, eating little and not really sleeping. Seeing him sad, I became sadder, it really was melancholy adding onto melancholy with no end......

Finally, there was a day when we did not mutually cultivate. He sat at the top of the bed and looked seriously at me. He looked for a long time, looked until all the hairs on my back stood up straight, then he finally opened his mouth, "Jin Mi, I'm going to ask you something, you must honestly answer me."

I immediately obediently agreed, I almost wanted to swear to heavens that just as long as he stopped being so mercurial, I would tell him all he wanted.

Who knew that he could not open his mouth for half the day... I had never seen him so hesitant. I was truly surprised, I did not know if he was preparing to divorce me or preparing to marry a concubine, such thoughts flowed through me and truly gave me a shock. At this moment, he finally opened his mouth, "Jin Mi, do you not want to give birth to my child?"

Ah, it was not about a concubine, so I relaxed and answered, "No."

Hearing this, Phoenix's expression became much better and his uptight body seemed to relax, he quickly added, "Then why do you seem so melancholic since the day I said you were going to be expecting soon?"

Oh so it turned out to be about this. I honestly replied, "I have pre-natal depression."

It was now Phoenix's turn for his face to darken, "What does a fruit like you need to be depressed about?"

Why can't a fruit be depressed? I was furious.

Only after I suppressed the anger in my heart did I said, "I am really very troubled - I'm not sure what thing will I give birth to."

When the word "thing" came out of my mouth, it was as if I saw a burst of red lotus flame shoot out of Phoenix's head, and hurriedly added, "Look, my father is water, my mother is flower, and thus gave birth to a frost flower like me. The previous Heavenly Emperor was a dragon, the Heavenly Empress was a female phoenix, and gave birth to a male Phoenix like you. Night's mother was a koi, but Night was a dragon fish. The Moon God and the Heavenly Emperor came from the same father but the Moon God is a fox.... thus, I was really unsure, I am a frost flower, you are a male Phoenix, what kind of fruit would be born? So, I was really really really troubled!"

Phoenix lost himself in laughter and I could see his dimples appear. He lifted his hand to flick at my forehead, "Unnecessary worry! You will naturally know when the time comes." Thus, Phoenix had truly removed all his worries.

And so, my hardship days returned, my poor waist......

Heavens indeed rewards the labor justly. In half a month, I was pregnant. From pre-natal depression it became pre-birth depression, I was worried every day, truly scared that I would give birth to something strange, for example the Moon God or Master Pu Chi......these were some examples of the height of strangeness.

Five years later, I finally developed from pre-birth depression to post-natal depression. Not because of anything, simply because I delivered a baby whose real self is a white egret. 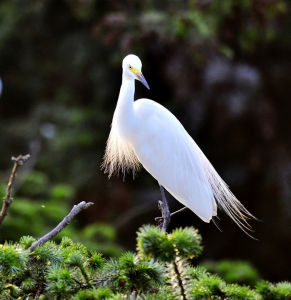 What is a white egret? The white egret is a type of water bird - water bird! What a species of bird that lacks strength - even a Phoenix was better than a water bird! I wanted to stuff him back in and deliver all over again.

But Phoenix was very happy, and I had never seen him smile so widely before. Even on the day of our marriage, he was only reservedly happy, not so expressively happy like this.

He has always known my heart well so he placed his arm around me and comforted me, "Our children and grandchildren will have their own happiness." Grandchildren? I was already so troubled by one son, how can I dare to think of grandchildren!

But, every time when I looked at his small face that was white and soft like the glutinous rice, when he used his little hand to wrap around my finger, when I heard his innocent laughter, my heart became at ease - I felt that the white egret was the purest most beautiful bird in the world. Even a thousand or ten thousand eagles cannot rival one feather from his snowy wing.

What's more in this black bloody Demon Realm, to give birth to such a pure and holy white egret, can be counted as rising from mud but not being stained?

Phoenix gave him the name "Tang Yue". It sounded familiar to me and I only remembered later that it was the name of the family shop I was born into when I was a mortal.

It was then that I realised that Phoenix was lazier than me.