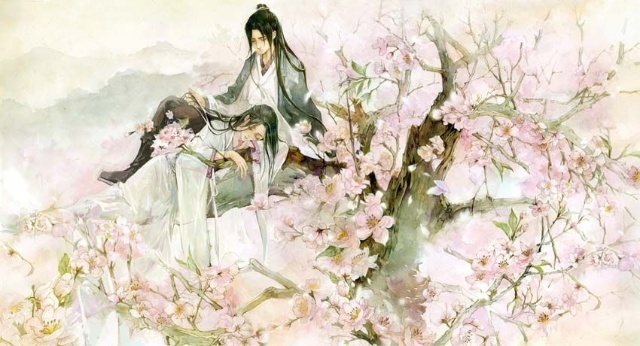 Dear readers, apologies for the long hiatus! I had a lot of things to handle in my personal and professional life, and so didn't have enough capacity to reply to comments and update my blog. Most of my things have been settled and I think this means I will have more personal time to write.

I have actually read quite a bit doing my hiatus as well and should have a few reviews coming up. Unfortunately, I have not actually read another book that has moved me enough to want to seriously start a translation project again. I will probably have to continue reading, finish the epilogues for Heavy Sweetness (I think there's two more!) and the Princess Who Cannot Marry ;)

This epilogue is especially cute and sweet!

Thank you for your patience! There's going to be a few more goodies coming up this week.

"Where are you going?"

With the Moon God's arm warmly round my own as we headed out, I suddenly felt cold sweat break out from my back from an icy cool voice.

As I turned my head back, I saw Phoenix standing behind me with pressed lips, the Phoenix who was supposed to be in his study. In that moment, I suddenly felt an awkward lightness in my heart. After hawing and hemming for a while, I suddenly remembered that I have not done anything wrong - only that I often felt shorter by about a three inches by his stature, so I raised my head and patted my chest and said, "How scary! I thought I was 'caught cheating in bed', scared me to death......."

The Moon God was so frightened that he loosened his grip on my arm and said, "We are innocent. Whiter than the egg white! Nephew, you have to believe me!"

The other half of Phoenix's face also turned dark.

The Moon God and I nervously watched Phoenix as he took in a deep breath, as if managing to control something, then he slowly opened his mouth, "Jin Mi, I once said that you can avoid using phrases that required four words (*chinese sayings like proverbs)".

Phoenix stretched his hand up and pressed his forehead, he said very seriously, "I don't think 'caught cheating in bed' can express elegance".

"Then how about 'Red Plum Over Wall' (meaning a wife being unfaithful)? Or 'Planting Flowers and Grass' (means to mess around with love)?" I felt that since we were husband and wife, naturally everything can be negotiated, this would reflect our harmonious relationship, thus I spoke in a humble and conciliatory tone.

Who knew that once he heard my words, the green veins in his forehead started to throb and he coldly said, "From now on, you are not allowed to use any four word phrases! You will be allowed to speak only after you figure out their meanings!"

Sigh, a man's heart is like the needle on the ocean floor. I really could not understand and gave him a recriminatory look. At my glance, his face immediately softened and he coughed before stating, "If you want to, it's not impossible...but when there's outsiders, you should refrain from it a little, ok?" After he finished, he seemed to deeply regret his change of stance and lightly furrowed his brow.

"Outsiders?" The Moon God's face turned gloomy, "Phoenix, are you saying I am an outsider? Ah, men turn unfaithful when they age. To think that you used to be a little bird whose first coat of feathers have not yet shed and how you loved to play in my manor. Now, you draw the line so clearly, I am so sad... so very sad!"

I immediately felt that these words were very familiar.

Phoenix just acted like he did not hear anything and interrupted midway, "Where was Uncle planning to bring Jin Mi?"

The cold desolate tones of the Moon God's complaints immediately stopped. His ability to emote and then stop was amazing. Phoenix narrowed his eyes and slowly lengthened his query, "Yes?"

"That's right," I added, "Tai Shan Lao Jun and Moon God has invited me to go test the pill today."

"Test the pill?" The ends of Phoenix's eyes lifted, "Test what pill?"

I suddenly realised something and so became silent.

But, who knew that Moon God would happily answer, "The Unfeeling Pill." Ignoring Phoenix's expression which immediately turned completely dark, the Moon God continued to add firewood to the fire, "You know that Lao Jun is completely addicted and mesmerised by the process of making pills - he believes that there is no pill in the world he cannot create and no pill in the world he cannot resolve. However he never knew that there was a pill that could cause someone to destroy all emotions - he immediately felt that this was a huge blemish on his reputation, so he gave his all to create a pill like the Unfeeling Pill. Who knew that he has finally produced one! He does not know yet if it works so he has invited Jin Mi to try it."


"You agreed?" Phoenix looked at me, his face completely ashen.

"Yes," I answered in a voice as tiny as a fly. Seeing Phoenix's face, I hurriedly added, "You know how I am more experienced since I ate one before..." Who knew that Phoenix's face turned even scarier until I did not dare to continue.

At this moment, I really wished I was a fly so I could fly away.

"Return to the room," After saying these words, he turned towards the inner house. He turned again, seeing that I was still standing at my original position, his eyes narrowed and he coldly added, "What? Unless you want me to carry you back?"

Scared me to death! I immediately lifted my legs and followed after.

"Don't go! Don't go!" The Moon God cried, "Phoenix, you don't have to be so anxious, Lao Jun created many pills. Why don't you come along? I guarantee that everyone can get one pill!"

"No need," Phoenix said lightly and closed the door.

Then, he quickly turned his body and I was so frightened that I quickly hid under the covers of the bed, "This... Phoenix... today's weather is very good... very good... why don't we mutually cultivate..." I only knew that after mutual cultivation, his mood would become very good and patient, he would agree to all my requests, no matter how much divine energy I asked for, he would agree... I wonder if it would work today...

"Jin Mi! I really want to strangle you to death at times!" Seeing how he has slowly forced me to the edge of the bed, I really thought that in a fit of anger, he would take back all the divine energy that I had tricked from him, but who knew that he just let out a soft sigh and finally embraced me in his arms, "You really... ah, rotten wood that cannot be carved."

I couldn't help being angry, so what if I'm rotten wood? There's still an unpicky moth like him who could not let me go and always wanted to bite me.

Of course, finally, we still went into the deep discipline of mutual cultivation... but how come it seemed like it was only me that got trained?

Pitiful me who had to accept his revenge - after a few rounds, he finally let me off as a strengthless me laid in his arms.

"Actually, Tai Shan Lao Jun had prepared the Unfeeling Pill and also the antidote together. No worries that it won't be resolved."

He opened half an eye and cruelly squeezed me in his arms, "Even if he prepared a pot of antidote, you are not allowed to touch it half a bit!"

I really felt that at this moment there were four words that would perfectly describe him, but I remembered how he had warned me not to use four word phrases, so I decided to let it go.

I could only silently murmur in my heart: 'Treating Trees as Soldiers'*.

* A phrase that means you are so suspicious that you even mistake the trees as soldiers.
Posted by Decembi at 00:09