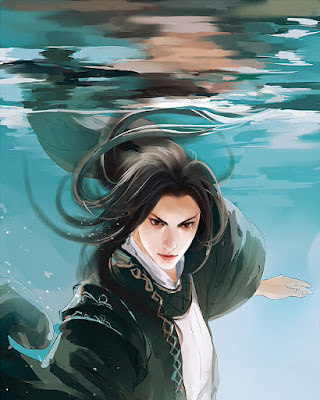 Thank you so much for your well wishes and support. It really touches me that there are readers for my story. I know it must take a lot of faith and patience for readers to follow my story and I am ever so grateful.

I'm having a lot of fun now that we are at the second arc. A lot of new things to explore even as there are old secrets to unravel. The thing that pleases me the most I think is watching Yu An grow into herself - even without knowing her identity.

I think all three male leads have their own connection with Yu An in the past - so all could be considered childhood connections. What's important as the story continues is who will live with her in the future.


Chapter 13: You and the Deep Blue Sea

The Dark Prince An Hun brought Yu An to an island. They landed on the edge of the island which faced a horizonless blue sea. Yu An had never seen anything like this before. She had seen paintings of ponds, lakes and rivers - but nothing ever like this - as if they were at the point of infinity.

By the time they reached this island, dawn had broken. So, the sea was lit with a light golden shimmer as if the stars had fallen from the sky and were swimming.

Wordlessly, they stood at the edge, the waves rising and falling, rising and falling, its own beautiful rhythm. She took off her her shoes and her feet pressing onto the sand - leaving an imprint, an impression as if to say she was once here. And, then the waves rose up and everything was a smooth sheet again. She liked to think that the smooth sand was pure like her mind, that the absence of memories was only just a beginning, because she would find them again - they were waiting out there for her, beyond what her eyes could see, but she knew that they were out there.

With her feet planted firmly, her heart comfortably in her chest, she held the golden flute in her hands, raised it to her lips and started playing.

He could not see her face clearly. She stood right under the rising sun. The rays lit up the edges of her body, sparkled off the gold, and lit the musical notes that floated melodically from the flute.

The salt of the sea. The sand under his feet. The ascending and descending waves. They were achingly familiar.

With every strong wave that reverberated from the sea, he thought he could hear his mother's voice.

Her song had finished. The ocean seemed to have delighted in its beauty. But, nothing arrived.

When she opened her eyes, he saw sadness. She looked at him with worry and confusion. "Did I do anything wrong?" She asked.

The wrong one is I, He thought. But, his eyes darkened, his mouth hardened, "If it was so easy, everyone would have caught a mermaid to keep at home by now."

Her eyes seemed to glimmer, half in annoyance and half excited by the challenge. She asked, "Do you think we should do a duet?"

She quickly added, "Can you play an instrument?"

An Hun gave Yu An a look of contempt and her shoulders slunk in disappointment.

Ignoring Yu An's thoughts, An Hun started to lead her into the forested area of the island. Deep in the forest was a well-made wooden house. Yu An was surprised when she entered the small house to see that it was elegantly furnished. However, before she could asked where this was, An Hun had disappeared.

It was just as well, Yu An thought, as she entered one of the rooms and laid down tiredly on one of the beds. She had hardly slept a wink on the flying large bird and she was grateful to close her eyes.

If only, she thought as she fell asleep, I could remember......

By the time Yu An woke up, the sun was already beginning to set. She blearily rose up from the bed and stretched her shoulders. The house was silent.

She got out of the room and started to survey the other parts of the house. No one was around. The Dark Prince hadn't abandoned her had he? Yu An thought with more suspicion than fear. Has she been such a failure?

She was not really worried that An Hun had left - good riddance, she thought, with his scowling face and arrogant demeanour.

Then, her stomach rumbled.

With a sigh, Yu An found a small knife in the house and headed out to the forest again to try and forage for food. However, she found nothing. No mushrooms, no fruits, not even flowers!

Yu An started to wonder if she should find a net so she could fish from the sea. So deep in her thought and hunger that she didn't even notice when she set off a trap.

With a whoosh, her leg was caught by a rope in a vice-like grip and she immediately found herself hanging upside down from a tree. In her shock, she had dropped the small knife.

After she regained her composure, she started to shout, "Dark Prince! Stupid Dark Prince An Hun! Where are you?"

"Idiot! If you don't save me soon, good luck in finding your own mermaid!"

Yu An's hunger and discomfort bolstered the loudness of her cries and the heat of her anger. She felt the blood all rush to her head and she felt so uncomfortable upside down that she felt nauseous. Just as Yu An was about to curse Dark Prince An Hun to an eternity of misfortune, she felt her feet touch the ground. A strong hand around her waist.

She raised her head and found a pair of laughing dark eyes.

"I forgot about this trap," An Hun chuckled, "I set it hundreds of years ago in curiosity if there were creatures on this island. Nothing had ever been caught... well, until you."

Yu An quickly tried to move away but the trap had twisted her ankle and she would have fallen flat on her face if not for An Hun catching her waist again.

Yu An was about to give a fierce remark when An Hun lifted her entirely off the ground and onto his shoulders like a prey he had caught from a hunt. He sighed, "What would I do with you? Could you be more stupid?"

An Hun turned his face towards her with a smirk on his lips, "Really?"

Truth be told, Yu An never knew what possessed her or how she found the energy to do so - but she raised her head and knocked her forehead forcefully against An Hun's own forehead.

Yes, Yu An head-butted An Hun.

Although he was surprised, An Hun's grip did not loosen on Yu An's body.

"Are you mad?" An Hun scowled as he glared at her.

But his anger did not last. She was a sorrowful sight - a reddish bruise on her forehead, tears in her eyes.

An Hun had always sworn himself to be a person who pays back ten times whatever someone does to him. But, this time, well this time, he let her go.

"You do it again and I will really throw you to the sea!" An Hun warned as he tossed this unruly, foolish mortal to his other shoulder.

Back at the house, the table was set full of food. Yu An's mood immediately brightened but she did not apologise.

Without even waiting for An Hun to speak, Yu An sat happily at the table and started to dig in. She noticed that An Hun did not eat but only drank the wine.

Suddenly, An Hun smiled at Yu An, "Don't look so curious at this wine. One cup and you will be drunk."

"Nonsense," Yu An said as she filled a cup with wine, "I'm like my father, we never get drunk."

At that, Yu An stopped, shocked at what she just said. She turned to An Hun, her eyes full of joy, "Did you hear what I just said? I'm like my father. I have a father!"

An Hun gave a derisive snort as he drank another cup of wine. Yu An joined him in drinking a cup of wine and gave out a happy sigh.

Then, it only just struck Yu An that what she had just said to An Hun would not make sense. She observed him as he silently drank cup after cup of wine. He probably didn't notice, She thought.

But, perhaps she was indeed a little tipsy and her mouth was a little loose, because Yu An confessed, "Actually, I cannot remember who I am or where I came from."

Yu An looked at An Hun - curious to see what his reaction would be. But, his face remained bland as he answered, "I know."

Yu An shrugged rather helplessly at his response, "Perhaps that is why I cannot play true music to touch a mermaid's heart."

Then Yu An's eyes lit up, "How about 'The Heartbreak Song'? If I could play that song on a guzheng (wooden stringed musical instrument), perhaps that would indeed touch the heart of the ocean."

"Have you figured out the musical scroll?"An Hun stated.

Yu An sighed as she shook her head, "Almost. I think I am halfway there... it's a love story, a dedication from the Princess to a foreigner who stole her heart. A man she could never have, a love she could never speak of except in her music."

Yu An knew An Hun was handsome, almost too beautiful even, but the way the edges of his mouth suddenly curled up like a very pleased cat, somehow that half smile entranced her gaze. She almost didn't hear what he said.

"Then, how about we go find the Royal Princess of Wu?"

Yu An blankly blinked her eyes at An Hun.

He was undeterred as he repeated with a cunning smile, "To untie the knot, we should go to the source."

"Do you know..." An Hun leaned closer towards Yu An and she felt her face flushed deeper, it was the alcohol, the alcohol, she repeated to herself, "about the love story of the Royal Princess of Wu?"

Yu An shook her head as she leaned back away from An Hun.

Yu An really started to wonder if the alcohol was getting to her because An Hun's words were making her head spin. This story... seemed... familiar....

"After that, the Royal Princess of Wu never married. It is said that she secretly loved the Yan Emperor and was impossibly heartbroken by his refusal. Thus, the Heartbreak Song was born."

Yu An kept leaning away from An Hun that she was about to fall off the chair. But, An Hun's hands were now cupped around her face. His hands covered her face except her eyes.

"Did you know that your eyes look like the Yan Emperor?"

She felt heat radiating from his palms. It was tingly but comfortable.

With a sudden flourish, An Hun transformed a mirror out of thin air and brandished in front of Yu An's face.

She gasped. Before her was a man.

No, her face was now a man.

A classic handsome face with a distinguished nose and an elegant bearing. His eyes were clear like the break of dawn...

It was my eyes, Yu An thought, and yet not.

Why does this man feel so familiar?


Yu An looked up at An Hun in confusion.

He smiled, "You will be the key to the Royal Princess of Wu."