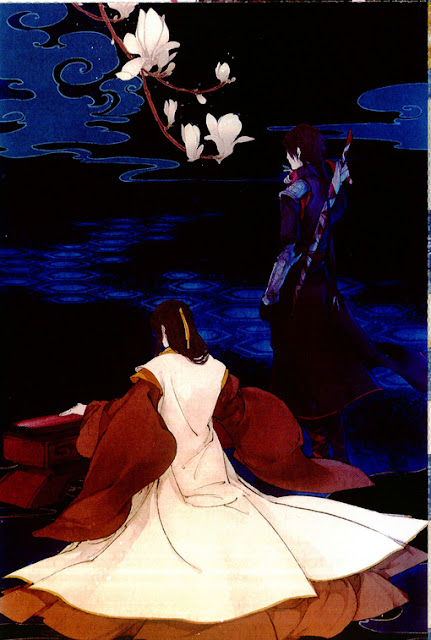 One of my favourite chapters in The Princess Who Cannot Marry so far. It's always fun to reveal the thoughts of a different character. Enjoy!

The Dark Lord chuckled deeply to himself when he heard the report on Yin Hua from his trusted ward. It was believed in the mortal realms that the famous Courtesan Yin Hua had been successfully redeemed by a travelling merchant. However, the truth was that one of Crocodile Prince Xie's men had forcefully abducted Yin Hua whilst brainwashing the truth of this incident from the mortals of the Golden Peony Mansion.

Nothing seemed out of the extraordinary except his ward had also discovered that Crown Prince Xin Yang was tracking Courtesan Yin Hua's movements and will soon trace her to Crocodile Prince Xie, despite Crocodile Prince Xie's attempts to silence the news about Dark Prince An Hun taking her away from him at his birthday feast.

The Dark Lord could tell that his ward, clever and savvy as he is, had not made the connection. His instincts had been true - the Yin Hua in the Dark Realms was likely not the real Courtesan Yin Hua. Crown Prince Xin Yang's only ties to the mortal realms was his god sister, the now mortal, EmpressYue of the Yan Kingdom. The current Yin Hua must have some links to the Royal Yan Family, which would explain the faint traces of gold in her soul. Not all royals will have gold in their soul of course, but the royals linked to the Great Yan Emperor, Hsiao, likely would.

Could it be? The Dark Lord's eyes crinkled at the sudden thought that struck him.

If it was true, things would get very messy, the Dark Lord thought to himself, but he did always like a bit of chaos.

He ordered his ward to call Dark Prince An Hun to see him immediately.

An Hun could never tell what his father was thinking, but this was the first time he felt a huge pressure overwhelming him when he stepped into his father's private study.

The Dark Lord didn't tell him to rise but asked, "Do you really want the throne?"


To his credit, An Hun showed no surprise on his face or posture, as he gave a deeply convicted nod.

The Dark Lord picked up a grand embroidered slim rectangular box, "Take this."

An Hun rose up to receive the box. He exchanged a look with his father before opening the box. At the sight of the golden flute that laid in the silk lining of the box, An Hun's face showed his first sign of weakness before regaining full composure.

"I give you permission to get the Mermaid King to support you," The Dark Lord said calmly as if he did not announce the end of a command of neutrality that had lasted for thousands of years.

The mermaid tribe was special. They lived in the oceans in the Mortal Realms and were its secret rulers - insulated, reclusive and mysterious creatures. They considered themselves neither creatures of light nor darkness, but creatures of the sea. They were very powerful but peace-loving. When An Hun's mother, Yao Lan, married the Dark Lord, she was breaking that neutrality.

An Hun never thought of speaking to the mermaid tribe. The traces of mermaid blood in him a painful memory.

An Hun recognised the golden flute, the Dark Lord's golden flute, that was able to project music through miles and miles of the ocean. Only the three heads of the Realms, the Heavenly Emperor of the Heavenly Realms, the Dark Lord of the Dark Realms and the Destiny Lord of the Destiny Realms, knew the hidden location of the mermaid tribe's kingdom. All other seekers to the mermaid tribe could only hope to attract a mermaid by music.

The Dark Lord continued, "Do not say no too hastily."

"I have made the decision not to favour any particular tribe in the fight for the throne. But, if you get the Mermaid King to ally with you, I will ask the Lust Tribe to ally with you."

An Hun's heart was shaken. He was going to close the box and return it to the Dark Lord - this path was not something he wanted to look back on. But, the Lust Tribe, his father's own tribe, would be a powerful ally - it was almost a hidden signal that the current Dark Lord was favouring him. The current princes in the Lust Tribe had no ambition to fight for the throne - preferring to enjoy the pleasures of the Dark Realms and the Mortal Realms.

"There is another condition," The Dark Lord added, "Bring Yin Hua along on the mission. And if you choose to accept, leave immediately."

An Hun gave a very deep bow towards the Dark Lord. Thereafter, he turned and left - the embroidered box in his hand, ambitions churning in both their hearts.

An Hun knew that Yin Hua would be at the music library. What was slightly unexpected was that in the huge library, she had actually explored enough to find his private room of shells. He had never thought of locking this room since Yin Hua was the first person he allowed to use his music library. Was it fate? He wondered for a moment, before pushing that ridiculous idea out of his head, No, it was merely convenient.

He did not know the exact reasons why the Dark Lord had suddenly commanded him to speak to the Mermaid King again - hundred of years after An Hun chose to turn his back on the mermaid tribe. The Dark Lord knew of his unspoken hatred. Was it because, An Hun scoffed, the Dark Lord fancied he could be in love with Yin Hua? And he thought that love, this glorious concept that his father and mother so believed in, would stop his hatred?

It only made him hate everything even more.

Love, An Hun thought mockingly, as he caught Yin Hua's hand before she could pick up a triton shell, Love was a fatal weakness that I long abandoned.

I will never forgive, An Hun swore internally, But, I will use you to gain the throne, then destroy it all. Yes, then, that will resolve my hate.

So when Yin Hua was pulled back and her eyes fell into An Hun's, for the first time, she felt all the hairs on her arms and back stand up. She always had a little fear for An Hun but his gaze - that murderous smoldering gaze as if he could burn everything down - she thought he wanted to kill her.

But in that very instant when Yin Hua's knees almost gave way and she thought she would sink to the ground, An Hun's eyes turn placidly cold and his mouth was framed into a smile, "Curious, aren't you?"

An Hun picked up the triton shell and placed it at Yin Hua's ear. He saw that her shoulders quickly loosened - she was always like that, as if music was a protective shield, she became strong through music and he could see the fear leave her.

Her eyes were no longer scared and they darted with interest towards An Hun, "Is this a mermaid's song?"

"How do you know?" An Hun asked as the hand holding the triton shell fell down.

But, he could see her eyes clouding with doubt, "I don't know. I just do."

And then she raised her eyes back to him, confidence seeping into the smile on her lips, "You have mermaid blood in you, don't you?"

His hands were behind his back, so she was not able to see his hands slightly tremble. In was in that moment when An Hun suddenly realised who Yin Hua really was.

Master Lang was hardly troubled, but he would admit to feeling hesitant in deciding if he should inform Drifter that Princess Yu An had gone missing. He had of course agreed to help his disciple, Hsiao, in tracing Yu An by using his contacts in the martial arts world and it was natural to ask Drifter to assist... but, how would he react?

Master Lang looked deep into Drifter's cold indifferent gaze and asked, "What is Yu An to you?"

Finally, Master Lang said, "She was last seen at the Golden Peony Mansion a few days ago but has not been seen since. Possibly abducted, possibly ran away, it's not clear."

Master Lang shook his head, "I can't let you assist in this."

The blood veins in Drifter's eyes had disappeared as Drifter said in an incredibly icy tone, "He won't come out."

"I can't trace Yu An on one hand and stop you from killing the rest of the martial arts world on the other," Master Lang replied in a tone that signalled it was the end of the discussion.

"You can't try to stir my heart and then shut it down at the first signs of stirring either," Drifter retorted, "Didn't you want to test my resolve?"

"Master, you are still strong enough now," Drifter continued, "But you are worried about ten years later, or twenty years later, if I can no longer control the symptoms, no one would be able to stop me. So, test me now - kill me if I fail, while you still can."

Master Lang was silent for a very long time before he said, "I will take the east and you can take the west."

Many questions were bottled inside Yu An but she did not dare to ask further ever since An Hun had ordered her to pack her bags and meet him at the entrance of his palace. But, most of the questions flew out of her head, when she saw a large silvery bird with red eyes descend with a wing stretched out towards An Hun and her.

An Hun easily glided up the bird and stared at her on the ground. Yu An nervously stepped on the huge feathered wing and was about to fall off when An Hun reluctantly pulled her up the bird.

They were clearly going somewhere, Yu An thought and then her heart raced, was he bringing her back to the Wu Kingdom?

"Are we flying to the Wu Kingdom?" She finally asked.

An Hun chuckled, "Well, the place we are going is near the Wu Kingdom."

She could not hide the happiness in her tone, "Can I finally go home?"

He passed a box to her, "If you fulfill the mission, I will let you return home."

Excitedly, Yu An opened the box and her mouth gave a slight gasp of awe at the golden flute that glimmered before her.

"What is the mission?" Yu An asked.

"To lure a mermaid."

Yu An asked the question before it cleared her brain, "Are you trying to go home too?"

She knew she should not have asked the question because something changed in his gaze - as if internally something had cracked.

But this time, she did not feel fear - rather she felt something like kinship, for the loss she too shared for a home she could not articulate.

His tone, however, was not one of disdain.

Yu An wanted to lean closer and ask for the reason, ask why the gaze in his eyes appeared like a reflection of a broken surface.

"There is no home left for me."

He started to laugh. But, it was a cold laughter that chilled her bones.

She hugged the box close to her chest.

And thus, they sat in silence on the large silver bird, as it swam through the dark night littered with stars.