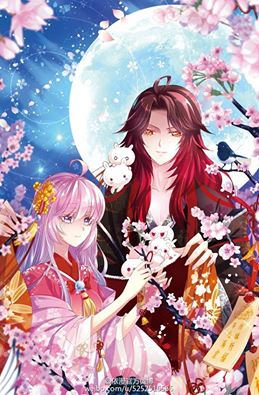 Thanks for all the Heavy Sweetness love. Most of all for the well wishes and prayers for my illness. I'm still rather sick but I was so touched that I cleaned up the translation for the epilogue. There are actually only four epilogues - counted five, because one of the epilogues are in two parts.

This is reminiscent of the earlier pure funny times between Phoenix and Jin Mi!


Time: In the hundred years when Jin Mi first went to the Heavenly Realms and was Phoenix's book boy

"Ah?" I had fallen asleep while grinding the ink slab when I immediately opened my eyes wide at Phoenix's sudden question. I gave an impression full of energy as I looked at him but I saw that his brows were slightly furrowed as he looked at the lower right. Following his gaze, I saw a small book being squashed by one leg of the table, its weak and thin appearance radiated a pitiful feeling. Of course, it was a little familiar. 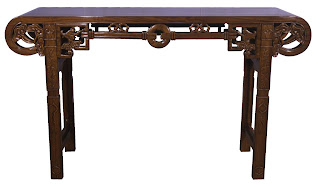 I suddenly remembered that I had tried to transform the book table this morning and originally wanted to turn it into a turtle... but who knew that after I chanted the incantation, not only did the book table fail to transform, it leaned on one side and became lame in one leg! Luckily, the limp was not too bad so I placed a few books under its leg such that it immediately returned to its usual straight stable self. Who knew that Phoenix's eyes would be so sharp and he would immediately spot it from one glance......

A thief need not have a guilty heart. A guilty heart need not necessarily be a thief. So, I very boldly said, "Naturally, it's a book. It's more stable with it."

Phoenix looked at me with a raised brow and with a lift of his finger, the books flew out from below into his hands. I saw the brushes and ink slab immediately fell down from the book table as it slanted to one side - luckily my eyes and hands were fast and I quickly caught the table to stabilise it.

Although seeing this heavy book table was about to break my slim wrist, the poisonous bird Phoenix did not care. He flipped one of the books and read out loud, "A Courtyard Full of Amorous Spirit?" His face darkened and he lifted his head to look at me, flipping a few more pages in the book, his expression continued to become heavier... finally, he slammed the book on the table and stood up, "You used such a book to support my table?"

Ah? What's wrong with the book? I lifted up my head and saw the page the abandoned book was opened to, ah, it was only a drawing. Why did you throw such a temper? Unless... he disdained the fact that the spring pictures* were not detailed enough? To give in to him, I added, "Second Highness, if you don't like this book, my room has many more for you to choose from."

"Jin Mi!" Phoenix narrowed his eyes at me and actually lifted his hand to hit the table - it was like adding frost to the snow, I felt a pang of pain in my wrist and finally could not hold onto the table. I heard a cacophony of sound and my body was also pulled along, and actually blearily fell into Phoenix's arms.

I moved and tried to climb up, but who knew that the belt strap of my robe got hooked onto something on my body and with one force, I heard the ripping sound of fabric. I had teared a hole at the waist of my robes.

"Ah....." I heard a sound from behind. I pathetically turned back - an attendant had brought a snowy beard old God at the door and both of them stared blankly back at Phoenix and me, then at the mess on the floor, an expression of wanting to say something but could not as their feet were half raised across the entrance opening.

"Don't move," Phoenix commanded into my ear as his hands supported my waist and pressed me into his embrace.

The old God's moustache twitched and then twitched again, finally, it turned red. Lifting his head to look at the sky, lowering his head to see the spring books on the floor, he said, "Spring has arrived... arrived..." Speaking incoherently as he turned his head and walked off.

In the midst of the spring wind, the pages full of amorous pictures were flying.

Phoenix and I looked at each other - small eyes to big eyes for a short moment. If the enemy did not move, I would not move. The wind brought the strands of hair that had fallen from his sides passed my nose, suddenly, I had an ominous feeling.

As I saw Phoenix's dark face come closer and closer to me, it was so terrifying I could not move... who knew, finally, he raised his hand to pinch my hair and said coldly, "How long do you plan to lean on me?"

It shocked my back full of goosebumps. I hurriedly and randomly pressed my palm for support and stood up. After I stood straight, I saw that Phoenix's brows were furrowed and his colouring was a little pale, "You.......!"

I? What did I do again? I gave him a bewildered look but saw that his face was black as he looked at my hands, he spat each word out by each word, "You -- Get -- Out!"

Of course, I did not expect a bird like him to be as kind and generous as us fruits, but I never thought he would be so aggrieved with me till this stage......

The second day, he transformed me into a pair of chopsticks. To be used to hold food but not be able to eat food - it is to want to cry but have no tears.

The third day, Chang'e from the Moon Palace brought her jade rabbit to visit. With a point of his finger, he changed me into a big fat radish! When the jade rabbit saw me, it immediately wanted to pounce over. Luckily, Chang'e hugged it tight or I would have definitely lost my life to a rabbit. After having a stare battle with the jade rabbit for two hours, I finally realised why Old Carrot Immortal was so scared of rabbit. Rabbits were truly the fiercest beasts in this world!

The fourth day, the cursed Phoenix changed me again into a drum. Being held in his hand, he knocked me till I almost fainted then he let me go.

Later, when I happened to cross the sky bridge, I heard one immortal attendant secretly whispering to another, "I heard that a few days ago, Second Highness and his book boy at his book table... mutually cultivated... and actually broke one of the legs of the book table......"

The other immortal attendant was so shocked that his eyes were wide and his mouth agape. He gasped, "To be so bold and violent!"

I raised my head towards the sky, with the sun burning bright, to be so bold indeed.

*I wrote before in the main story that "春" means spring and also passion. The term "spring book" is an oblique way of saying "sex".
Posted by Decembi at 23:49