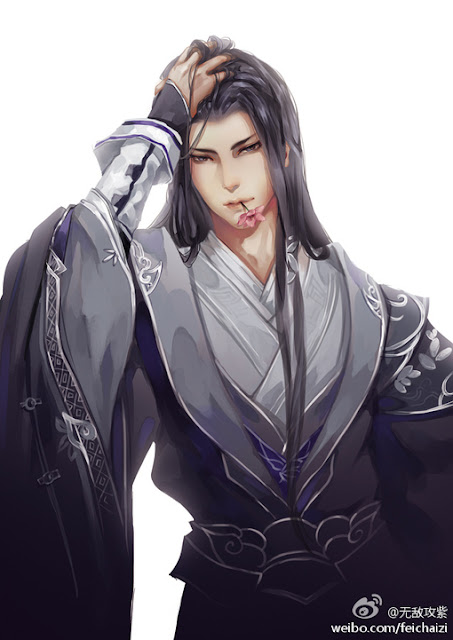 
Thank you for all the love you have given me in the last two chapters. It made me so happy! This work week has been so overwhelming and I have perennial headaches. But, everytime I read a comment, I feel really revitalised. Thank you.

I really hope you enjoy the second arc!

The moment the beautiful man spoke those words, Yu An felt like her heart may burst at the hope that was filling inside of her.

Suddenly, everyone else fell down on their knees at the sight of the man standing. They called him, "Your Highness". Except of course, another figure with a strong presence, sitting on a raised throne-like chair, was still in his seat.

Glances were exchanged between these two powerful figures and Yu An was mildly horrified at how her life hung in the balance as two men looked at each other. Could she be more pathetic?

But, suddenly, the figure on the chair stood up as well, a false smile on his lips as he raised a goblet of wine at her, "Come and serve a toast to his Highness."

Yu An guessed this must be Prince Xie of the Crocodile Tribe. There was a bloodthirsty edge in his eyes as if he wanted to suck her blood dry at this very moment.

Yu An took in a deep breath and stood up from the guzheng.  She slowly and carefully walked through the still kneeling audience towards the man who said he would take her.

Very gently, she controlled the expression in her face as she took the goblet of wine from Prince Xie. She bowed down towards the man they called your Highness. It was as if her mouth knew what to say when her mind didn't, "Your humble servant pays her respects to his Highness."

"Rise," He said calmly and repeated it in a deeper tone permitting for everyone to rise.

When he took the goblet, Yu An's deliberately calm exterior almost broke. His eyes, she thought, they were so dark, as if they could never be lit by any light or warmth.

Suddenly, Yu An did not know if she had picked the wrong side - which was safer? The crocodile or the abyss?


Yu An stayed silent throughout the whole time she followed his dark Highness. She instinctively sensed that a simple wrong word or action would send her reeling back into the dangerous claws of the Crocodile Prince. Even if she did not trust in the character of the dark Highness, she knew at the very least that he was not interested in eating her.

Finally, they were at the entrance of the mansion. Her whole mind cried at the chance to escape. But, where could she go? She was not even lost in her own land, she was entirely transported into an entirely different realm.

A silver carriage strode up on winged horses. Yu An didn't know if she was more surprised by the gleaming carriage as if it was made out of the stars in the sky, or the long feathered wings arching out of the horses' backs.

A servant opened the door to the carriage, and as if playing the part of a doting lover, his dark Highness actually raised up his hand to lift her gallantly up to the carriage first. Yu An only too gleefully complied like a good partner in crime.

When she got on the carriage, she immediately moved as far as she could inside and leaned as deep as she could onto the silk linings. When his dark Highness entered, he seemed to smirk as he comfortably took his place on the other side.

Yu An remained quiet as she felt the carriage took to the sky. She didn't dare look out of the windows at first, but the light from the stars seemed to stream in and if she wasn't in such a compromised position, she genuinely thought that she might be enjoying this.

Still, she knew her position. His dark Highness, whoever he is, must be higher up the political totem pole than the Crocodile Prince. Although they smiled at each other, she guessed that his dark Highness only picked her, like a terribly petty boy taking the prized toy of another, just to prove that he could.

But what happened to the toy when the other boy is no longer around? Does the toy become worthless?

She wondered if she could barter her way out of here. Maybe convince him to send her back to the mortal realms? But what did she have to give?

Before Yu An fell too deep into her thoughts, her reverie was broken by a chuckle.

"You aren't foolish," Yu An rose her head towards his gleaming eyes.

What could she do? Yu An moved over to his side.

He arched his brows lightly, "Who would have thought that the famous Courtesan Yin Hua was so wooden?"

"There's no point wooing a man who doesn't even see me as a woman," Yu An blurted out before she could control herself.

"Then what do I see you as?" He asked. Yu An thought that it was unfair that his voice was as beautiful as his looks - the way the sound of his words twirled over his tongue, into her ears, like a hynoptic drawl.

And for that moment, Yu An was hynoptised. She asked, her tone hopeful and uncertain, "Have we..." but she stopped herself before she could finish her words and embarrass herself completely.

He suddenly got very close to her. So close she felt his breath prickle her neck. And then, he reached into her robes and she was going to smack him when he pulled out the guzheng scroll she kept at her chest.

He unravelled the scroll and looked at it with amusement, "Did you write this music?"

Yu An shook her head as she tentatively moved back.

"Now, now, don't make your fear so obvious," He said in a deceptively gentle tone, "If you are brave enough, I might even let you leave alive."

He is deliberately scaring me, Yu An comforted herself.

He picked up her hand, "You are trembling."

"I don't know what you are made of," Yu An said rather gruffly, "But I am a weak mortal made of flesh and blood and we were not meant to fly."

He actually laughed. And more shockingly, he took off his outer piece and wrapped it around her shoulders, "I still have some use for you. Don't die yet."

After they reached back to his Highness' palace, Yu An noted that his men and servants were shocked to see a maiden step out of his carriage. He ordered for one of the servants to take her to the bluebells courtyard and that was the last she saw of him.

She thought at that moment, I don't even know your name.

Later, she got closer to the female servant attending to her, Xiao Li, and she learned more about where she was. At first she thought that the Dark Realms was what they mortals believed to be the netherworld for lost souls, but it wasn't. The Dark Realms was a realm full of creatures from her mortal nightmares. Demons, ghouls, sprites and ruled by Dark Immortals that preyed on the seven mortal sins: lust, greed, sloth, apathy, envy, wrath and pride.

Her dark highness was Prince An Hun of the Wrath Tribe.

The Dark Realms was made up of seven royal tribes and ruled by the Dark Lord. Most preposterously, the Dark Lord appeared to enjoy the natural conflict between his royal princes in the seven tribes. Prince An Hun himself was competing for supremacy with Prince Lie Hun in the Wrath Tribe.

Yu An reminded herself never to be angry in front of Prince An Hun. He was a being, she believed, whom it was never wise to show a weakness.

Yu An could hardly tell if time passed in the Dark Realms for she grew increasingly weaker. As much as she tried to muster her energy to do something, her body was faltering.

Just as she thought that she would disappear so unwillingly in this dark forsaken land, he appeared. And, he rather roughly poured a black liquid into her mouth. Wasn't that the black liquid she suspected was poison and had been pouring away behind the garden? She had tested the liquids passed to her on the plants around her and was shocked to realise that it killed the plants. Thus, she had been sneakily pouring them away.

"Stupid," He spat after the whole of the bowl's liquid had stained her mouth and robes, "I can't tell if you really have a death wish."

The liquid was bitter but she felt her limbs tingle as if coming to life.

"Yes, this is poison," He said icily, "Poison to counteract the poisonous fumes you breathe in just by staying in the Dark Realms. Do you think this is such an easy place for silly mortals like you to live in?"

I cannot be angry, Yu An thought as she answered, "Then let me go!"

Yu An saw Xiao Li enter her bedchambers and bowed towards Prince An Hun, "Your Highness, his Dark Lord has arrived."

He held up her head and stared coldly into her eyes, "Even if you want to die, you have to wait for my permission first."

He got up and ordered Xiao Li, "Get her ready."
The tips of his mouth actually rose at the sight of Yu An's hands slightly shaking. "Yes," He said, "Get angry. If you have energy, get angry at me. Make me regret treating you this way."

She had been weak before, but now she got up from her bed. The speed of which made her legs wobble slightly but Xiao Li caught her.

Yes, she could not remember anything, but she knew from the very fibre of her being that no one has ever treated her in such an infuriating way. She will definitely not die. No, she will live, she will torment him even if it was the last thing she did, then, then, Yu An thought in agitation, she will leave and find her true place.