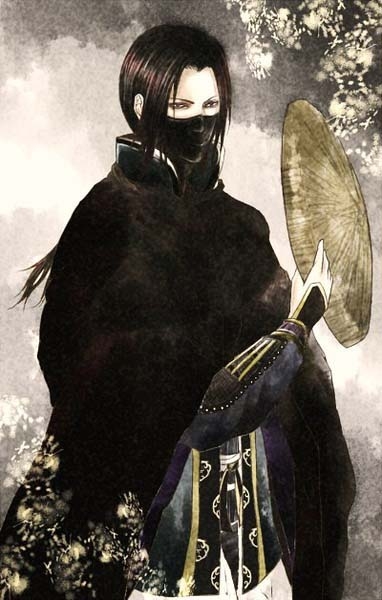 I confess that I was motivated to finish up Chapter 8 faster because of an anonymous comment describing the little bits she liked from the three male leads. It really touched me! And this is an important chapter for one of those male leads!

We return to the palace and Yu An realises that things are never the same again.


Hu Zi and Drifter were waiting outside the cave when Yu An and Qing exited. Hu Zi immediately knelt down and greeted Uncle Qing, "Captain Hu Zi pays his humble greetings to Grand Prince Qing."

Qing gestured for him to rise and shook his head, "No need for formalities, I am only a monk. I do not recognise the title you greet me."

Drifter remained aloof on his steed. Qing gave a whistle and his horse sprinted towards him. The quartet made a smooth and silent ride back to the Mo Tribe headquarters.

No further words were said under the deep veil of the stars. It seemed like all was finally at peace.

The return journey was without any obstacles. Hu Zi was much more willing to be trained by Master Lang on the way back and Drifter remained his silent self. Qing seemed to enjoy the silence and he often went aside by himself to meditate. Sometimes, Yu An and Qing would converse about her childhood and her younger brother, the Crown Prince Hsiao Yang. Yu An remembered Qing's face when she informed him that her brother was a reluctant prince and his dream was to wander the cities as an artist. Qing had a face of wistfulness before he said, "Like his father."

The night before they returned to the Capital, as usual, Qing had went off to meditate, Master Lang and Hu Zi went away to duel, and there was only Drifter and Yu An left at the campsite.

As Yu An fed the camp fire with more firewood, the only sound was the flickering of the fiery tongues of the flames. No, she realised, there was also her heartbeat. Faint but pulsating. She turned to look at Drifter, who was sitting on top of one of the tree branches, as if he was a bird, longing to be released to the sky.

"Drifter," she called out. Her voice wasn't loud but she knew he could hear her.

"Thank you for accompanying me on this journey," Yu An said sincerely. She paused then continued, "I don't know why you called yourself a sinner, but the fact that you hold whatever past sins so close to your heart tells me that you are definitely not heartless."

"And in fact," Yu An said with an almost wondering voice, "You probably have the most gentle heart of all." She thought of Drifter always silently waiting in the background - not because he didn't care, she was sure, but because he wanted no credit in his protection.

Drifter didn't reply, and Yu An didn't need him to. For someone who loved to make music, she found herself comfortable listening to the flames and her heartbeat in the silence.

Yu An calculated that it had been about twenty three days since they left the Yan Kingdom on the third day of the Grand Yan Emperor's funeral. Thus, when they finally returned to the Yan Kingdom, it was already the twenty-sixth day.

At the city gates of the Capital of the Yan Kingdom, Master Lang and Drifter remained outside as if indicating that this was where they stopped.

Qing nodded his appreciation to Master Lang and Drifter then turned to Yu An, "Tell your father I will meet him tonight at our garden." With that, Qing rode off.

Yu An rode her horse closer and whispered towards Master Lang, "I just have one last thing to say, Master Lang. My grandmother goes to the main temple in the Capital twice a month to pray, on the eighth and on the twenty-eighth. She has done this for every month since I've known her. I followed her once and it was strange, for on the twenty-eighth, she prays while looking very far away. As if the person she prays for does not belong in the Yan Kingdom."

Yu An moved her horse back, her eyes twinkling, and then she bowed low on her horse before Master Lang, "If fate decrees, we will meet again."

She gave a smile and quick nod towards Drifter, and then turned towards the city gates with Hu Zi. Master Lang and Drifter watched as their backs disappeared into the gates, into the crowd, no longer to be seen.

Master Lang inclined his head towards Drifter, "Now that you have met the princess you were supposed to be betrothed to, would you like to return to your real identity?"

Drifter's face remained impassive and Master Lang shook his head, "Your cold expressions don't fool me." Master Lang pointed to afar, "Your brother has arrived as representative for the final ceremony of the Grand Yan Emperor's funeral. Go see him. You can't run from your past forever. I will see you again on the final day."


Hu Zi escorted Yu An right to Hsiao's palace before indicating that he will be returning to his household to see his parents. Yu An smiled at Hu Zi, "I will find you after everything settles. Don't escape to the sea before I find you!"

When Yu An entered Hsiao's study, before Yu An could even bow to greet her father, Hsiao had already rushed towards Yu An and grabbed her hands in deep happiness and concern. "Yu An, how have you been?" Hsiao asked with deeper emotion than Yu An had usually seen from her always composed father. "Did you suffer on the journey?"

Yu An shook her head and laughed, "It was wonderful, father. So wonderful!"

Yu An pressed her palms into her father's and smiled, "Uncle Qing agreed to return. He said he would meet you tonight at the garden belonging to both of you."

Yu An felt her father's hands tremble. Yu An looked steadfastly into her father's eyes as she nodded with greater intensity, "Uncle Qing has returned."

Hsiao didn't utter an additional word as he pulled his daughter into his embrace in wordless gratitude.

Thus, Yu An returned to her own palace with a very satisfied smile on her lips. She also missed her mother and siblings dearly, but decided to freshen up her attire before paying her greetings to them. She had never left the Royal Palace for such a long period before.

Yu An was happily humming to herself when she was met with ecstatic glee from her personal maidservant, Xiao Qing, "Princess! Princess! You are finally home. Your humble servant has missed you so dearly!"

Yu An took a step back to avoid Xiao Qing's over exuberant greeting. Yu An look curiously when she saw a beautiful woven box on the table in her bedchambers.

"What is this?" Yu An asked as her hands traced the intricate embroidered patterns on the box.

"Didn't you send this home?" Xiao Qing asked confused, "It arrived about ten days after you left."

Yu An looked curiously as she carefully opened the box. When she saw the delicate scroll inside, her heart started to race. Even before she carried it up to examine it before her eyes, she seemed to already appreciate the monumental significance of what was before her. Holding in her breath, as if she was afraid all of these was just a dream, she slowly unravelled the scroll before her - it was the musical scroll for the legendary guzheng piece, the Heartbreak Song, played most famously by the Royal Princess of Wu.

She was stunned - dazed beyond comprehension. Her brain stuttered -- then bits and pieces started to form inside her mind, but... but she only told this to Drifter?

Her grip tightened ever so lightly on the scroll - could it? Could he?

When Yu An went to the residence of her mother, Empress Yue, she was still in deep thought. Her mother smiled warmly at her, as if she had already anticipated Yu An's arrival and was not surprised.

Empress Yue gestured excitedly towards Yu An to come forward to where her younger brother, Hsiao Yang, was sitting. Hsiao Yang raised his head from his painting when he heard Yu An's arrival, "Elder sister! You finally came back. How mean of you to leave without even saying goodbye to me."

Yu An smiled apologetically, "Father had me leave in a rush and I had no time to say goodbye." Yu An frowned as she bent down towards the parchment Hsiao Yang had been painting.

Hsiao Yang nodded innocently, "Mother has been asking me to paint you."

Empress Yue gave a hearty shameless chuckle, "Since you were not around, I had to find some way to show all the single royals what a beautiful daughter I had right?"

But Empress Yue turned serious as she looked in deep contemplation at Yu An's heart. She turned with a gentle smile at Yu An, "Yu An, mother has her reasons. Anyway, what is wrong with your mother proudly showing off her beautiful daughter?"

Yu An knew that it was impossible for her to win an argument with her mother, for Empress Yue, never argued with logic.


The Yan Emperor had specially designated residences in the Capital for the foreign royals who had came from afar. As there were too many royals, it was not possible to situate them all in the Royal Palace and there were several security difficulties. However, these residences were as grand as the Royal Palace and were guarded by the foreign royalties' own private contingent.

A tall solitary figure landed in front of one of these special residences. He was masked and the shocked guards quickly and fiercely unsheathed their swords towards him. The lone figure coolly removed his mask and immediately all the guards knelt down on the floor, their heads downcast, their swords on the ground.

Drifter gave a cold "rise" and entered the residence almost in reluctance. His younger brother, the Second Prince of the Xue Mountain Tribe, Bai Yan (烟 (yan) meaning smoke), had already rushed towards the entrance when he heard his guards.

Drifter raised up a hand as if to indicate that Bai Yan was not to come closer.

"Father and Mother will be so happy to hear that you are here," Bai Yan rejoiced as he welcomed his older brother towards the table where he was having tea, "They were worried since you had not sent back any letters for a year."

Drifter did not make any response as his eyes fell onto the unrolled parchment on the table.

Bai Yan swallowed his words not because he was hesitant but he had been stunned at the wisp of a smile on his brother's lips as he said, "It does not look like her."


Author's note: Finally! Finally I get to reveal Drifter's real identity. The original title of this chapter was "Unmasked" but I thought that it might be too revealing so I changed it. Haha. With the unveiling of Drifter's real identity, we can see him stepping to the forefront of the role of one of the three male leads - or will he?

Plus, oh gosh, I love Yue. Hahaha. She's such a sassy Empress.