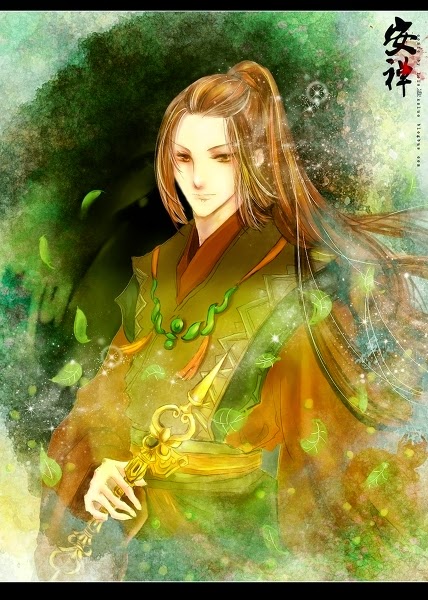 Enjoy the end of Chapter 22!

In the early morning*, I went to the study to find Night and saw a few immortal attendants that were usually around Night's Four Stars Palace. These female immortal attendants were always very polite and would lower their heads to greet me, "Greetings to the Higher Water God." I would nod my head in response.

When I look at people, I usually only generally look at their faces. But, today I was surprised by a sense of familiarity by her face and stopped my footsteps, "What are you called?"

I thought for a moment but the name remained unfamiliar. Seeing my confused look, she added, "Tai Shang Lao Jun ** is my father." The female immortal attendant spoke with a sense of pride at her father who had almost sacrificed himself in helping Night ascend the Heavenly Throne.

The daughter of Tai Shang Lao Jun? I suddenly vaguely remembered her silhouette and nodded, "I remember seeing you before. You are the little heavenly soldier who asked if the Heavenly Emperor will take concubines?"

Her face turned red and she lightly nodded her face, she was so embarrassed that she looked like she wanted to jump headfirst into the clouds.

I looked at her and said, "I've remembered it. You can return first."

She gave me a look of disbelief and seeing that I was not mocking her, she happily blushed again, gave her thanks and respectfully sent me into the Four Stars Palace before leaving.

When Night saw me enter the study, he immediately threw his brush aside on the table and rose up to take my hand. My hand instinctively retreated a little, but I did not pull it away and let him hold it in his palms.

"Jin Er, you came just at the right time. They just sent a plate of pomegranate cakes over. I have already had breakfast and am full, why don't you try them for me?" As he spoke, he personally placed the beautiful red plate of treats before me.

I took one piece and nibbled it. Lately, I have always been absentmindedly eating something*** but Night has never tried to reveal the reason for this. Except, whenever I visit him in his study, he would already have prepared some treats for me to eat for him.

He treats me very well, so well that it could not be better. It made me feel even more insecure and guilty, not being able to bear his gentle and kind gaze. I said, "I have been hearing prayers about drought in the mortal world. However, when I visited the dry lands, I realised this was not something rain could cure... it's Huo Do**** and some other creatures' evil doing..."

He pressed my hands and with some difficulty under his gentle gaze, I finally said, "Ren Yu (Night's first name)......" He liked to hear me call his name and if I used the wrong name, he would stare at me until I changed it.
Hearing this, he smiled contentedly - as if this one call by me made him happy from the bottom of his heart, like he had just received ten thousand years of divine essence.

"I saw Tai Shan Lao Jun's daughter outside," I decided it was better to say it out loud.

"Ah?" Night turned his face towards me, there was a glimmer of light passing through his gaze and he looked at me with a curious expression.

"Actually, I don't object to you taking more concubines. If you do have people you like, you may also marry them." He treats me so well, but what he wants, I cannot give... I can only hope that someone else can give him what I could not give.


He paused immediately and looked at me seriously in my eyes. I returned his gaze sincerely and honestly. The ends of his lips pressed down, he tossed the plate of treats onto the table, released my hand and stood up. He gripped both his hands as his back turned towards me, "It must be so difficult for you to have to think for my benefit," His tone had never been so icy cold before, "Jin Er, I'm not afraid that you have no heart, I'm afraid that you will have this kind of heart!"

Is this a refusal? Sensing that Night had refused, I decided it was best that I left. I quickly flew off in an aimless water mist... and I saw from afar an oily green figure hovering at the Heavenly East Gate trying to convince the heavenly soldiers to let him in. I lowered the water mist towards it.

Master Pu Chi's gaze quickly flickered over as if he had met his relative, "Beauty, is this you?" Quickly, his face puckered into a crying expression, "These two woodblocks would not let me in!"  He lifted his leg and took the chance to rush to my side.

The two guards quickly stopped him, "Don't think of being rude to the Higher God!"

"Beauty, since they won't let me in, why don't you come out?" Seeing Master Pu Chi's glistening expression that glittered as if he was going to have a stroke, I kind-heartedly stepped out.

Master Pu Chi pulled my robes and left, but before he walked off he did not forget to turn around and give a proud gaze at the guards.

"Ordinary disposition? Are you hinting that my divine essence is low?"

"I'm not speaking of divine essence," Master Pu Chi said with a frustrated expression, "All the previous Heavenly Empresses have been cunning, deceitful, devious, cruel, they hide a knife in their smile and a sword in the stomach... Beauty, you don't have a single of these traits..." As he was reaching the climax, he suddenly paused.

I followed his gaze and saw a beautiful girl flying into the Heavenly East Gate. My heart suddenly felt a shard of pain.

"Don't even speak of the previous Heavenly Empresses. Even Sui He... Beauty, your skills also fall behind her."

I lowered my head, the truth from his words hit right at my sore spot and I felt my eyes watering.

"Beauty, don't! Don't! Don't be sad. I did not mean it that way," Master Pu Chi looked at me helplessly, "I was saying that you are not as devious as her! You don't know how to manipulate the heart. When I was young and innocent, I was also tricked by her once..."

I looked in shock at Master Pu Chi and heard him say, "When I was one of the Twelve Zodiac Gods, I was so pure and cute... I was carefree and only occasionally teased the little female immortal attendants. Although Sui He was from the Heavenly Empress' tribe, she was a distant relative, and there were several people in the tribe, why would she have special notice? In order to gain power, she noticed me. At the Heavenly Peach Banquet, she drugged my wine and framed me by placing one of the Heavenly Emperor's concubines in my embrace... finally, she brought a group of immortals to catch us in the act! In his anger, the Heavenly Emperor removed me from the rank of gods and evicted me to become a sprite. The concubine was demoted to the mortal world. The Heavenly Empress is so jealous that she could not even tolerate a speck of sand, she had long disliked the concubine. Sui He knowing this had executed this plan... and became the Head of the Bird Tribe."

It turns out that I had thought too much.

"So Beauty, why for just a bird, you give up on all the snakes in the land and go towards the embrace of a dragon? You will suffer when you have to fight with the Heavenly Emperor and the other concubines... Beauty, I cannot bear for you to suffer and disappear in a cloud of ashes..." Master Pu Chi sighed and shook his head.

My face darkened at Master Pu Chi thinking of my death, "You compliment me."

Master Pu Chi said carefully, "The troubled sea is boundless, it is better for you to return to the shore. Although, some women are scary, there are men who are scarier..."

Hearing this, I smoothly followed, "So only people who are not women and not men are not scary?"

"Beauty, you should run away from the marriage! I found you today to talk about this!" Master Pu Chi passionately invited me to elope with him. However, my heart was already fixated on something else so I did not listen to his nonsense and walked away.

The Demon Realms and the Heavenly Realms were hostile like water and fire... now that Sui He was going to marry to the Demon Realms, why did she come today?

More strangely, when she entered the Heavenly East Gate, she was heading towards... the Four Stars Palace.

*This is between 7 to 9 am.
** The one who made the pills.
*** Her habit of eating something sweet to soothe her heart's pain.
**** A chinese celestial creature that eats fire.

Comments: By the end of Chapter 22, Jin Mi broke Phoenix's heart, Phoenix broke Jin Mi's heart, Jin Mi tries to accept Night's heart but also ends up breaking Night's heart. We also saw Old Carrot Immortal, the Moon God and Master Pu Chi appearing to give Jin Mi some 'scolding' and 'advice' - now that Jin Mi knows her heart and how she could be so cruel, would she return to the shore as advised by Master Pu Chi or plunge herself deep into the troubled sea - a 'homecoming' of sorts perhaps for a rare six-petalled frost flower?
Posted by Decembi at 17:23