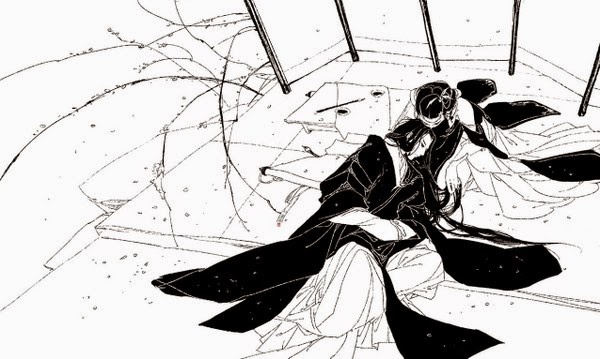 I know the wait for Jin Mi and Phoenix to finally meet has been excruciatingly long - but sometimes I think that gestation period is so very important, because sometimes we forget what an impossible position Jin Mi is in. She longs for a man she killed - she longs for a man she thought deserved death for killing her father. If she was a noble idiot (which she is not, perhaps just an idiot?), she would have locked herself far away and tried to repent herself out of existence - but no, she goes back to the Demon Realms again, ignoring that he just tried to kill her by burning her with samadhi flames.

You can see why all the sane rational gods around them (if they existed and knew) would be like - Run, girl, Run. And, Jin Mi, does run - just not in the direction you might expect.


The candlelight in the room emanated a low glow and flickered over his face, leaving it half in light and half in darkness. Because he was drunk, his lips were moist, and there was a layer of weariness in his brows. The place between his brows in which I had bit him - there was no longer any trace of that.

I lowered my head and seriously examined him, hate him? Love him?

If I didn't hate him, why would I personally kill him? But, why was I in such pain after I killed him - an unbearable agony that was worse than death? Was this because of a voodoo spell? But, if I loved him like what the others say, why would I kill him? We accompanied each other day and night for a hundred years but I never sensed any other feelings, in the hundreds of years after when he spoke deep words of longing to me my heart also did not move, he kissed me, he kissed me many times, that time when he was really drunk, we even mutually cultivated... but, I have never placed him inside my heart.

How could I have fallen in love with him immediately after his death? What's more he is engaged to Sui He already...

He suddenly opened his eyes, those dark pupils stared at me. Not a glimmer of the light in the room was reflected within his gaze. I was so shocked by his sudden movement that I couldn't move. But, he only looked at me and thereafter closed his eyes. Suddenly, I recalled that he acted like this too when he was drunk in the mortal realms, he was only unconsciously blinking and wasn't really awake.

His lips moved and lightly opened, as if he was saying something. I became curious and leaned my ear closer to hear his words. After a moment and after carefully observing the shape of his mouth, I thought he was trying to make out two words... "Water... Drink..." He must be thirsty after drinking so much alcohol.

Before I realised what I did, I had already transformed a cup of tea in my hands. In one hand, I held on to the back of his neck, in the other I brought the cup of tea towards his lips and lightly leaned it towards him.

But who knew that his thin lips would tightened and the tea dripped down his lips. I repeated the process a few times but nothing could go in. I became rather anxious and finally placed the tea into my mouth, leaned towards his lips and transferred the water, drop by drop......

When I left his lips, I saw his closed lids lightly shudder. As I placed the tea cup down, I heard him open his mouth again and tried to form the words, "Water... Drink..."

So, again I drank a mouthful of tea to transfer to him, just as I started to use the tip of my tongue to tease open his teeth, I felt myself being hooked by another tongue. I was shocked but before I could retreat - it was already too late.

The tongue carried the taste of osmanthus flowers, and it prickled my tongue as if it had thorns upon thorns, hooked, entwined, like the shadow following the body. I could not escape, I could not hide, my mouthful of tea slowly transformed into deep strong wine, I was intoxicated beyond my senses.

I felt a hand hold onto the nape of my neck, the palm was icy cold as if it was metal. I suddenly shivered and the coldness awoke me. I pushed away his chest and tried to climb up, but my back was already firmly held onto by another arm. No matter how I struggled, I only caused both our robes to unravel further.

His robes were open, revealing a strong chest, the feeling of his muscles caused my face to burn. Hurriedly, I closed my eyes but in the gap before I firmly closed it - I saw a faint frost mark in the middle of his chest, as if sealing up something... my heart winced and I reached out my hand to touch the light scar.

He closed his eyes and unconsciously his brows furrowed, a thick murderous intent swept over me and I couldn't help freezing in fear. But in the next moment, he let go of the back of my head and started to venture into my robes... I felt the silk buttons drop to the floor one by one.

He lightly stroke my waist, the tips of his fingers slowly crawling up my spine, breezing by my shoulders, I heard my heart quickly beat into his palm.

His breath tinged with the scent of alcohol swept across my forehead, there was even a cruel trace of sweetness. I held in my breath for so long that I thought I would suffocate, even the tips of my toes were tense. Suddenly, the world spun and he pressed down upon me.

I licked my lips, reached out my hands to hook the back of his head and kissed his lips... he kissed me from the tip of my tongue to my back, inch by inch, careful but not gentle. His kisses felt like fire and enraptured my heart. I held onto his shoulders, wrapped myself around his legs, as if my heart wanted to find a warm support. In a moment, our breaths entwined into a web, as if we were always connected, we had never left, there was no separation of life and death, no ambiguity between love or hate, only two closely knitted hearts, with different pulses but holding on close together......

He entered with a force that would shock the heart and moved the soul. In that moment, everything was empty, silent, and the song had come to a standstill - but suddenly, the music started to rise, the horses started racing, the battle fires, the horn, the war cries... it was overwhelming and I felt myself being swallowed...

I did not know how long had passed but bathed in sweat, I leaned upon his chest. I watched him sleep with both his eyes closed, it was beautiful in an unfathomable way.

I lowered my head towards that light frost mark again in his chest, I reached out to stroke it - it was like my heart was drowning and I could not breathe.

I was struck, did he want to drink tea again? Perhaps he was internally heated after drinking so much alcohol and was naturally thirsty. But, when I tried to deliver tea to his mouth, he impatiently turned away. His mouth opened again, but this time I heard it clearly and I did not need to guess what he was saying from the shape of his mouth.
"Sui... He..." [*Water has the sound of Sui, and Drink has the sound of He]

I felt like my senses had been struck by thunder. After a moment, I placed both of my hands on my ears so that I could not hear anything.

"Some things... it is better not to know. The clearer it becomes, the more it hurts..." Night's words suddenly burst into my heart, I felt like my heart was bleeding.

There was never any "Water... Drink...!" It was always just my foolish guess, from start to end, he was calling for Sui He...

For her, he became drunk, he became sad, even worse, he hugged me, he kissed me, thinking I was......

I clumsily stood up and the hands that tied my robes were uncontrollably trembling. I tried my best to tie the robes properly, but I could not concentrate - I could only see a cloud of mist. Finally, I did not know how much effort I had to muster to reasonably dress myself.

The road was long, there was no end, I ran all the way. But, I kept feeling that a fierce ghost was chasing after me, wanting to eat me, eat my skin and meat, not even leaving my bones.

But, I suddenly saw through one thing clearly.

There was never a voodoo spell...

I love him, I had fallen in love with the enemy that killed my father...

That clearness, that sort of clarity, left me completely bare.

Comments: Definitely one of the harder chapters to translate. This is one of my favourite chapters emotionally, though I don't actually enjoy translating mutual cultivation scenes, and I have to admit that I translate them with a large amount of 'creative licence' - I prefer to make them more poetic and ambiguous.

Whatever it is, I just want to give Jin Mi a good ol' hug. You followed your heart all the way, Jin Mi, but sometimes what lies at the end of the rainbow is not a pot of gold. Or is it?