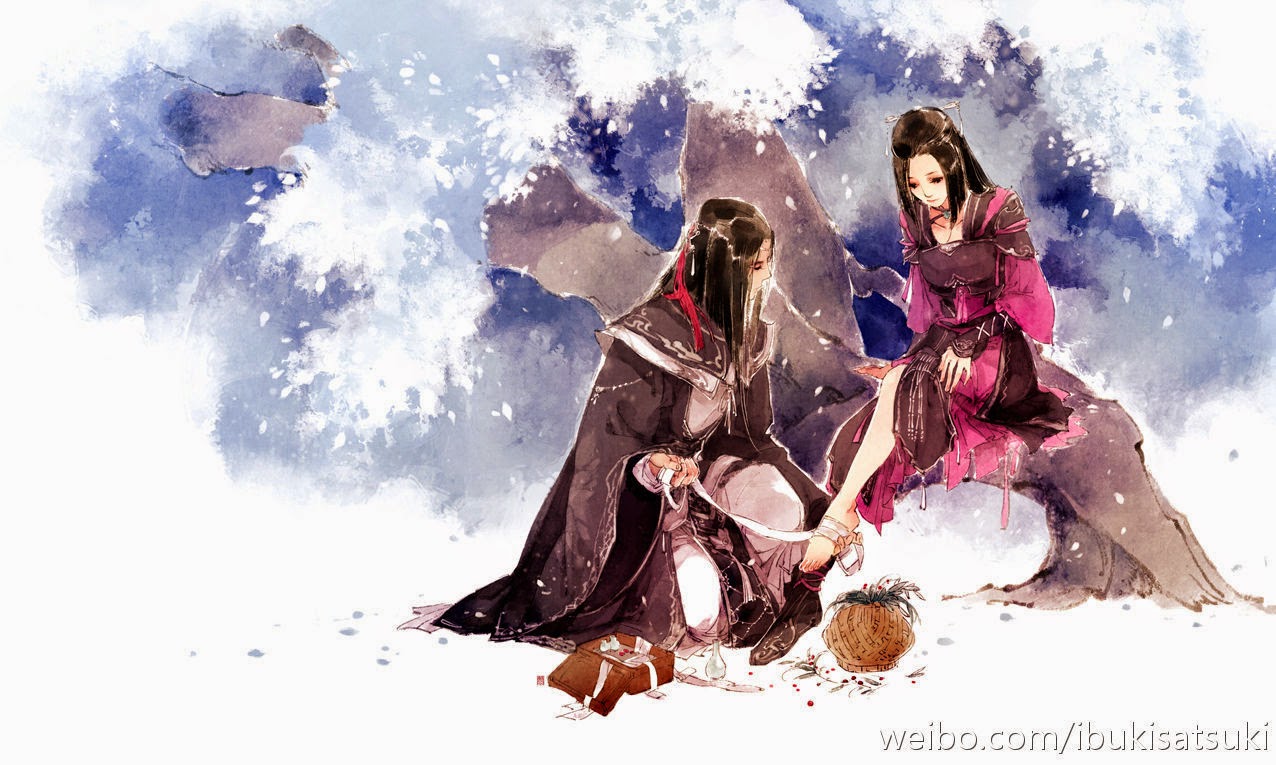 I really enjoy reading and translating Dian Xian because not only does she plot her story well, she writes with a great sense of feeling for her characters and builds on the metaphors and ideas she has already established in the earlier story. I think it's great that it's Night who finally pushes Jin Mi to face the real nature of her feelings - not to push her away, but in hopes that in learning about her heart, she could find a space inside for him.


Night sat at the bed edge. He lowered his head and was applying medicine at my wrist. Suddenly, he held my arm and pulled up my sleeve all the way to the top. My whole arm was completely exposed to his gaze. I was shocked and wanted to pull down the sleeve but he forcefully held on and I could not move.

To be grabbed so forcefully by him, my arm started to hurt even more and I took in a deep breath, "Ah----"

I never knew Night had a violent side and I could not helped being frightened into a daze. But, he did not lift up his head, his eyes fixated on the burns I had suffered from the samadhi flames. His brows deepened, the edge of his mouth tightened, and he did not apply the medicine as gently as before. It was as if he was taking revenge and using the medicinal cream to roughly abrade the burns. The pain caused tears to well up in my eyes but I did not dare to make a single sound.

After he roughly finished applying the medicine, his expression seemed to become worse. He opened his mouth a few times as if he wanted to say something, but he was not able to. Finally, he turned his head and walked off.

When I realised this, I quickly stretched out my hand and grabbed his sleeve, "Night..." I called him back but I did not know how to continue. I already did not know what I wanted to say when I pulled him back.

He did not turn his head back at all. With his back rim-rod straight and his head unturned, he coldly said, "Do not speak. Do not say anything to me." In half a moment, he lightly let out a breath, so light it was like an immediately passing cloud, "Some things... it is better not to know. The clearer it becomes, the more it hurts."

He lowered his gaze to my grip on his sleeve. He appeared to hesitate but he finally said in a calm tone, "Let go of me."

I did not know what was this feeling in my heart, but I complied and let go of his sleeve. A long time passed but he did not go. Silently, I turned back into my room. With just two steps, I heard a light wind behind me, Night had turned around to hug me, "Jin Er..."

I froze as I heard the loud beating from his chest, "Jin Er, can you not let me watch your back again? I am waiting for you to turn back, I have always been waiting for you to turn back. Do you know this? I convinced myself that if I spoil you, let you do whatever you want, if I just lived each day having one eye close and deceiving myself, if all these could make you happy, make you become healthy again, you will one day see all the good in me, see my feelings for you. But, why... why do you never turn back? Why are you willing to let him incinerate you with the samadhi flames but not willing to seek my embrace?"

He looked at me - his gaze had no light in it at all as if he lived in an abyss of darkness, "Till this day, do you still love him?"

I frantically pushed him away, "What are you saying? Love? I have never loved him. I hate him, I hate him!" I suddenly felt a wintry coldness throughout my body, a coldness born from my bones, I hugged my arms tightly to give myself some warmth, "I have only been struck by a voodoo spell. Why don't you understand this?"

"Voodoo spell? Voodoo spell... I have also been struck by your voodoo spell, why don't you release me?" He lowered his head with a resigned smile, "You can let me go, but I can never let you go..."

I watched as the cloth overlaying the window split open then fell back again, and then splitting open again with the wind, just like how my heart felt so empty it was as if someone had taken it out.

I did not understand anything......

Every day, I fed the Nightmare Beast, I planted flowers and plants, and counted the wishes for rain Night passed me from the mortals' written prayers. Sometimes I thought, mortals could make wishes to the gods for their troubles, but who can the gods pray to when they have their own troubles?

I glared at her.

"Great God, please do not glare at me. Li Zhu is only speaking the truth. All these years, how the Heavenly Emperor has treated you. Even if other people do not know, the Great God can't possibly not know?" Looking at her stance of trying to cry out for the injustice of the wronged, I tried to change the topic, but I heard her say, "I heard recently that the Head of the Bird Tribe is going to get engaged. When will the Great God marry the Heavenly Emperor?"

My heart sank, "With who?" Although I already knew the answer, I did not know why but I was still holding out for a trace of hope...

Li Zhu embarrassedly gave a cough, "Last time, Princess Sui He also had a relationship with Gentleman Yan You (this is Master Chi You), I also heard it was because of her that Gentleman Yan You was removed of his 'god' status and demoted to a sprite..."

Looking at how Li Zhu tried to dodge the question, I had no heart to listen to any more gossip. I felt like my heart had been pressed and squeezed, it was extremely uncomfortable.

The Head Flower Leader asked, "Jin Er, don't tell me you have fallen for the Fire God?"

Master Pu Chi had asked, "Beauty, have you been connected a wrong red thread and fallen for him?"
Night asked, "Till this day, do you still love him?"

That night, when Night went to the West to discuss buddhist scriptures, I once again went to the Demon Realms.

When I saw Phoenix, he looked as if was a little drunk, his steps were unstable as he was returning to his manor. Two female demoness went forward to hold him but he pushed them away. He held a jade drinking jar. After a sip, he appeared to be displeased and threw it on the floor. The jade drinking jar broke upon impact and released a crisp breaking sound, frightening all the surrounding attendants to kneel on the ground.

"Ah?" Phoenix looked at her and stretched the tail-end of his cry. The female demoness did not dare to argue and only said, "I will quickly go and get the osmanthus flower wine!"

Phoenix returned to his bed chambers in a few steps. I quickly transformed into water vapour and followed him inside.

In his bed chambers, he had already loosened his robes and laid down with his eyes closed on his bed with heavy silk curtains. A white jade hair pin with gold fell down to the floor and his long black hair fell upon the bed. One of his hand fall outside the bed, hanging alone... as if wanting to hold onto something but always in vain and falling down again with no strength. The tips of his fingers were white.

I wanted to hold on to that hand... as I just started to transform back into my body I heard the low rustling of robes from outside the door and hurriedly transformed into something to hide in the fruit bowl.

Two female demoness brought a jar of wine inside. It must be the newly prepared osmanthus flower wine. They lightly placed it on the table. Seeing Phoenix messily lying on his bed, they appeared to want to cover him with a blanket, but after hesitating for a long moment, they did not dare to do so in the end.

Just as they were to exit, one of the female demoness saw me hiding in the flower bowl and her facial expression immediately changed. She pulled on the other demoness' sleeves.

The other demoness quickly turned around and her face paled immediately. She quickly reached out her hand. Looking at her direction... was she heading towards me?

At this moment, Phoenix turned on his bed and the two demoness were so shocked that their hands froze and they quickly left the bed chamber.

I could hear the female demoness slowly tell the other, "It was a grape... who no longer wanted their lives and dared to put a grape in the Great One's room! Who in this world could not know that the fruit the Great One hates the most is the grape... tomorrow when that person understands will be the moment his or her soul leaves this realm..."

I saw the reflection of a plum purple grape in the crystal fruit bowl and realised that in my hurry, I had changed into the self I had not used in a long while - a grape.

I did not know why but I suddenly felt like I was a paper lantern that had been ripped and was left floating in the wind.

He moved again and his hand reached out to impatiently take off his robes. He appeared hot and he seemed to be murmuring something. He could not sleep peacefully. I knew that he was usually  not conscious after becoming intoxicated with alcohol and would not discover me, so I transformed back to my real self and walked towards the head of his bed.

Comments: * It's wonderfully expressed without needing to make explicit that Phoenix misses Jin Mi because he longs for the osmanthus flower wine she makes. The title of this chapter says it all, love and hate changes in an instant.