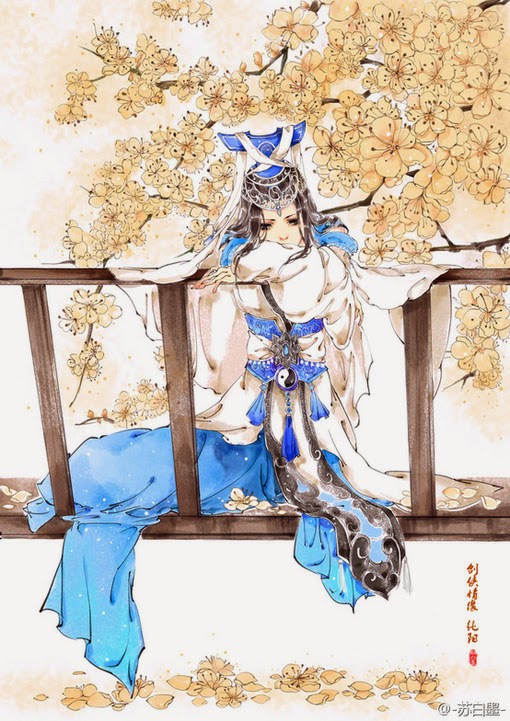 Present for my ever loyal readers who have stuck with me regardless of my schedule! Chapter 21 is too long though, I still had to split the last part into 2 halves. Personally, I find this part satisfying in seeing Jin Mi's emotional growth come very close to full circle.


Today, I came late, I did not know if he had already went to sleep. I searched continuously within the residence but I could not find him. Just as I was about to leave, I was almost stepped on by a demoness who was rushing. Luckily, I jumped away and managed to avoid her.

"Quick! The Great One wants to find the special cloak that the Second King of Hell had given to the Great One as a tribute! Go and quickly find it!" I heard the demoness shout at the soldiers along the way.

In one moment, all the soldiers in the residence was running off - they must be heading to the storage huts to find the item. Very quickly, one of the ghost soldiers carried a beautiful ornate jade box and seriously handed it over to the demoness. He could not hide his curiosity and asked, "The Great One has never given a single look to the tributes, why did he suddenly think of this cloak today?"

"What would a small rank ghost like you know?" The demoness sniffed disdainfully, "Today, The Great One has arranged for a grand banquet at Yu Qiang*'s Palace to celebrate the birthday of Princess Sui He, Head of the Bird Tribes. At the very least, you should know this?"

The ghost soldier nodded his head.

"Didn't you already say? She is the Head of the Bird Tribes?" The ghost soldier scratched his forehead and answered confusedly.

The ghost soldier's face suddenly had a look of realisation. He asked in a low and sleazy voice, "Do you think the Great One will use his life to repay the debt of saving his life? (The connotation is to marry Princess Sui He)."

The demoness gave him a look of 'you are hopeless', "If it is to give one's life, it will also be Princess Sui He giving her life to The Great One. But from what I see, if the Great One is willing to marry anyone, it will have to be the Head of the Bird Tribe. I have no time to talk to you already, I must go." She then left.

I followed her from behind, but very quickly I could not keep up with her. Sadly, my bunny feet were short and I could only hop. Luckily, I remembered the smell of her demoness aura and followed the scent to Yu Qiang's Palace.

Just as I was about to try and enter the palace, I saw rows of people rushing out. At the head of the rows were Phoenix and Sui He.

They stopped outside the palace and the rest of the people stopped a distance behind. Sui He lifted up her glistening eyes towards Phoenix then lightly cast her lids down, her eyelashes were long, black and thin, they lightly moved in the evening light and stirred one's heart. "It is fine if you send me out to here. Today, I am very grateful and overjoyed for the Great One to hold a celebration for my birthday."

Phoenix lightly waved his hand and an accompanying attendant quickly opened a jade box in his hand. That was the jade box I had seen previously. When the jade box was opened, immediately the multi-coloured flashes of dazzling light burst out of the box causing looks of shock from the surrounding demons. Sui He's eyes slightly widened. Phoenix took the cloak out with one action and personally put it on Sui He. He even gently tied the two cotton strings around her neck, "The night wind is freezing, Sui He must not catch a cold."

Ignoring the shocked looks on all the surrounding demons, he took a step forward and leaned towards Sui He's ears to speak in a low voice.

When he finally moved away, I saw that Sui He's face was flushed entirely red. I could not tell if it was shyness or joy, but tears actually fell from her glistening watery eyes. She lightly stirred and bit her lips as she looked at Phoenix, it even looked like she was pouting slightly. In half a moment, she recovered her usual composure and informed the surrounding demons, "May the surrounding guards remain as Sui He will leave first. I thank all of you for the invites today." Finally, she left in a sea of polite cries of 'it is nothing! You don't have to be so polite!".

I did not know if the others heard, but the night wind had sent Phoenix's words into Sui He's ears cleanly into my own, "Since we are so close, why do you call me The Great One?"


I savoured the bitterness of the night wind and suddenly felt my heart shrinking. The voodoo spell was reaching out its claws to me......

When I finally regained consciousness, everyone had retreated and Phoenix had returned into the palace. I heard the music within the palace and during the gap when the guards were being changed, I quickly snuck into a shadowy corner of the palace hall.

In the palace hall, there were flickering lights, red silk, the intoxicating scent of alcohol, and beauties everywhere. There were twelve exotic female demoness dancing with their bare naked feets, golden bells tied around their ankles, giving off a lovely crisp sound as they danced. It was like a hynoptic spell that caused one to lose one's senses.

There were no lamp stands in the palace hall, only lanterns of fire carried in the beautiful servants' hands, the red lanterns were like the dying blaze of the sun covering the hall in a shimmering faint layer of light, as light as translucent silk.

Phoenix sat at the central position in the hall as he sipped wine. Flanking both his sides were two females, one pouring wine, one adding food. Phoenix suddenly narrowed his eyes to a corner, he lowered the wine goblet in his hand, and smiled at the female on his right. That smile could hook your soul and the demoness was completely stunned, she lost the grip in her hand and a pair of chopsticks fell down to the ground, her body went limp.

Phoenix thoughtfully stretched out his hands to support her. The demoness immediately happily fell into his arms. Sensing that Phoenix did not reject her, she completely leaned into his embrace. She hooked her arms around his neck and coquettishly brushed his chest, "The Great One, since Princess Sui He has left and the night is still long, can you spare some of the time for your humble servant?"

The coldness in Phoenix's eyes did not change but the edge of his lips lightly bent. I could not tell if it was a sign of a smile or permission.

But the demoness's rationality must have been overwhelmed and she tightened her grip on Phoenix. Phoenix's hand lightly brushed her hair - a simple action, but it was completely intoxicating from him.

I suddenly remember how he used to often brush my long hair, helping me pick out the falling leaves that had landed in my hair from the wind. Even if there were no leaves, he would like to slowly comb through my hair. Sometimes he would comb my hair for such a long time that I would get annoyed and turned my head around, but he would not stop, only saying, "There are still some leaves, I will help you take it out, you better not move."

I did not know why, but I suddenly realised that the steadfast gaze he used to give to me was actually so precious.

* In chinese mythology, Yu Qiang is the god of the sea and god of plague (and even god of the wind).


Comments: Although reading Jin Mi's longing for Phoenix may seem sad, I do think it has a 'she deserves it' connotation to it. I like the parallel - Phoenix used to stare at Jin Mi all the time but Jin Mi was unknowing, but now Jin Mi stares at Phoenix all the time with new found consciousness.

My personal favourite is the last part when Jin Mi realises, finally realises, what she has lost.