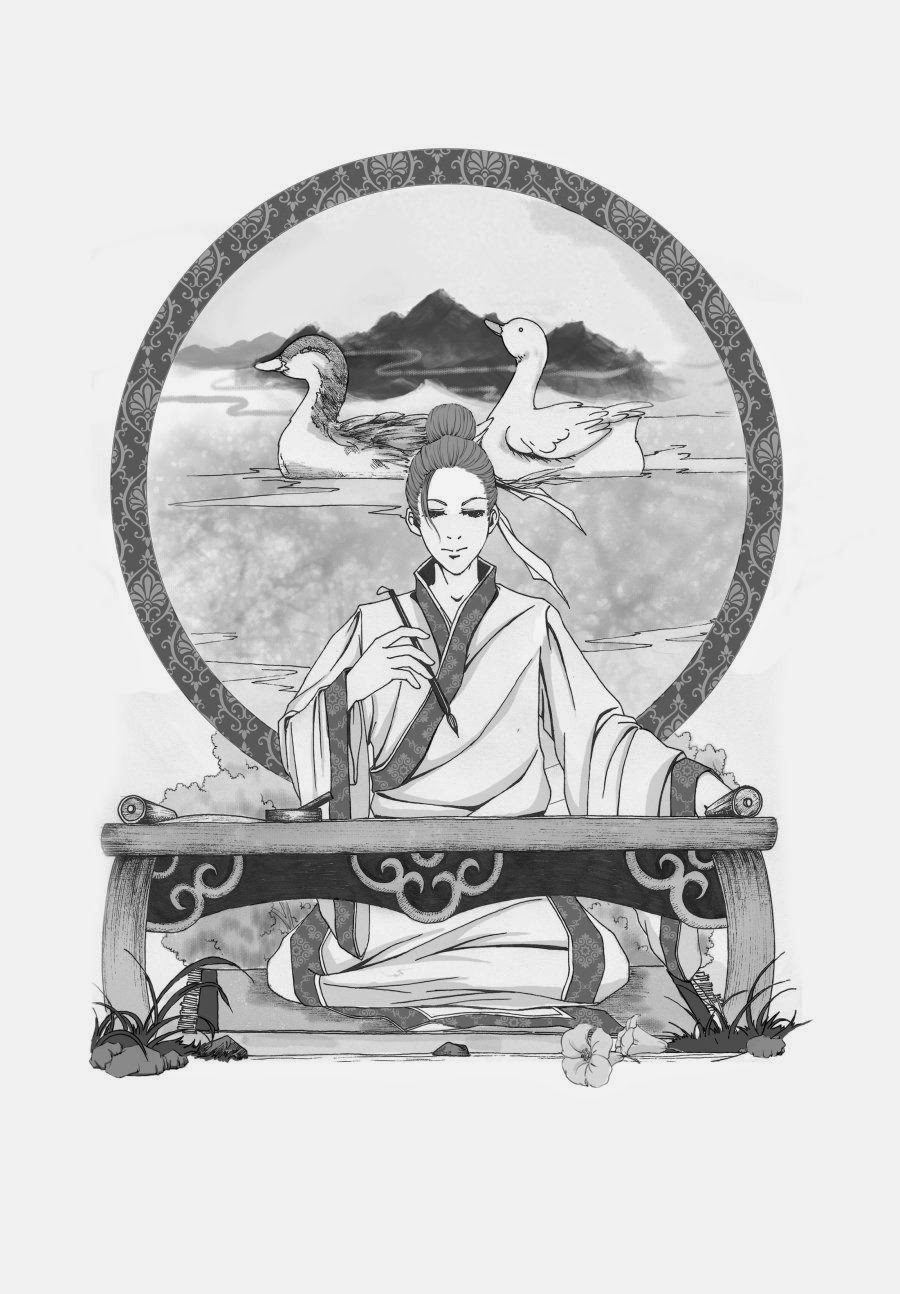 Early valentine day's present from me!


I suddenly recalled how everyone said that his looks were unparalleled in the six realms. Previously, I never had that feeling, but suddenly today I realised that he was indeed unfathomably good looking.

But, I should hate him, hate him very deeply. I should feel that he is the ugliest person in the world, shouldn't I? His parents murdered my mother, he killed my father, even before he died he did not forget to put a voodoo spell on me. Yes, I should hate him, grit my teeth, beat my chest, hate him with my all.

I was rendered speechless.

I watched as the carriage slowly pulled away and repeated Master Pu Chi's words mindlessly, "Ah, two people daily flipping the clouds and covering the rain (*it sounds like people tumbling in bed).

But who knew that before my words finished, the surrounding demons and ghouls had turned their heads towards my head that was peeking out of Master Pu Chi's robes. Their expressions were shocked. Master Pu Chi forced out a smile towards the crowd, "My rabbit sprite likes to see spring palace pictures (*basically amorous pictures - the connotation is that the rabbit was saying a sexual expression), it only just learned to speak, just learned to speak..." All the demons' faces darkened and turned away.

Far away, the carriage suddenly stopped and someone turned back his head. Master Pu Chi quickly lowered his head with the crowd.

The person's gaze slowly swept through the throngs of demons, but luckily missed the spot that we were in.

After a moment, he kept his gaze and suddenly broke out into a smile. The smile was truly bone-chilling.

The carriage started to move away and it left into the far distance.

Master Pu Chi carried me, and the Nightmare Beast followed after. He rushed out of the Demon Realms, as if he was rushing for reincarnation. Only after he crossed the River of Forgetfulness did he stop to take a breath of air.

I jumped out of his robes and transformed back to my original state. I saw that Master Pu Chi's forehead was soaked with sweat.

"Beauty, your phrase of 'flipping the clouds and covering the rain' almost got us killed," Master Pu Chi sat on the ground and fanned himself.

I was stunned, "Weren't they your words?"

Master Pu Chi's brows flicked, "I said, 'turn the hand upwards to become a cloud, turn the hand downwards for rain'. Your phrase is for mutual cultivation, my phrase is about power, they differ by far. Money can be saved, but words cannot!"

I finally stopped my addiction towards sweets, but started a new addiction.

Since that day when I saw Phoenix again, I would frequently take the opportunity to go to the Demon Realms when Night was busy. I would always transform into a rabbit using those bunny ears to cover my heavenly aura. My disguise was never seen through by anyone.


After a while, my courage increased and I sneaked into his residence. Despite entering and exiting many times, I was not caught once by even a little ghost. I thought that no one would notice a small, very small, rabbit sprite.

Although I went frequently, but the times I saw him were very few. Even when I saw him, he was always surrounded by many demons. I was scared of being detected so I never dared to go forward, only gazing from afar. Even just gazing from afar, even just one glance, it gave me such joy as if I just gained five thousand years of divine essence.

I like to visit when he was reading his official papers. He was different from Night, he would not read during the night, but study the papers during the hours of "yi".* This is usually the time when Night is most busy and I had the greatest chance of sneaking out. What's more his study faced a garden of flowers, since my natural self had the scent of flowers and wood, it was very safe for me to hide in the flowers and grass. So often, I would secretly hide under the strong wooden stems of the Phoenix Flowers, peeking through the gaps between the flowers and leaves, and watch the blood red sky of the Demon Realms reflect on his slightly pale side profile.

When he perused the official papers, he would be extremely quiet. His eyes would fully focus on the words, sometimes his brows would lightly lift up. That strong nose, that half closed eyes, that slightly raised lips...... all these created an extraordinary silhouette. But, I knew this peace was an illusion that was easily broken, it was an illusion that only appeared when there were no souls and only paper and ink. Once he left the official papers, those two eyes would become like a deep well with no water, so dark it was frightening, his surrounding aura was cold and piercing, it overwhelmed people until they could not breathe. No one dared to look in his eye. Everywhere he went, there were only large groups of nervous and anxious demons and ghouls.

He approved the papers very quickly, but never hastily. His long slim fingers flipped page after page, sometimes his fingers would pick up one or two drops from the ink that had not dried. The black ink fell on his almost translucent finger tips, it gave one a deceptive impression that even if one was a piece of paper or a drop of black ink, one will be very blissful.

But, he did not approve papers everyday. And, I was not always able to leave the Heavenly Realms everyday. Sometimes, I had to wait for him at places surrounding his residence instead. Sometimes, I will be waiting outside the big door of his residence to watch his carriage move away in the distance. Sometimes, I was able to watch him from where he was eating, seeing him just place down his chopsticks to rise. Sometimes, I was able to hide in a corner of his residence and see him calm down after a brutal killing, sometimes I can see beautiful seductive demon maidens holding him from left and right as he entered the inner hall, in the dark of the night, he would walk out with his face blissful and his robes untidy......

Comments: I have honestly SO MUCH to say, but I think no matter how I craft it, it will sound very spoiler-ish.

Now, I didn't mean to end the chapter here, and I really wanted to finish Chapter 21, but there's still a whole chunk more (at least the length of this update already). I will see if I can finish it by the end of the week.

But, my gosh, THE FEELS.