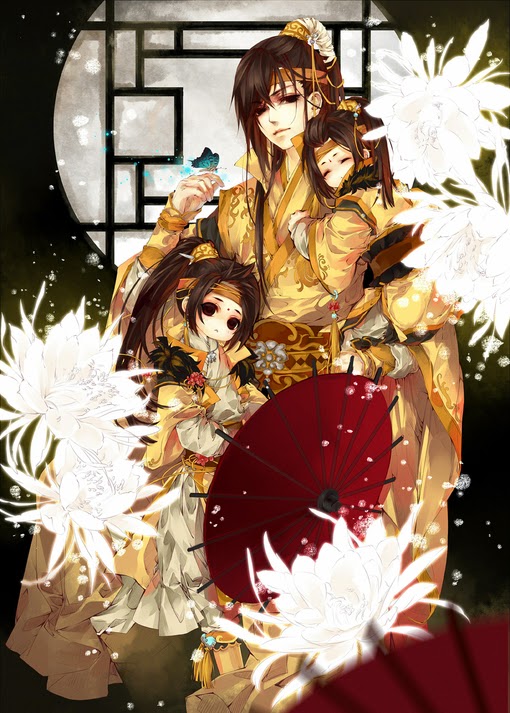 For the Author's Note for The Sun's Dark Love, I'm using a picture I didn't get to use in the main story - I imagine this is Xi Yang holding young versions of Yu An and Hsiao Yang (Yu An's younger brother in case you have forgotten haha). They are so adorable!

In all honesty, The Sun's Dark Love was not a story I planned on fleshing out. While planning for Little Moon's Matchmaking Mission and writing it, I did think of what will happen to Xi Yang after the story and I imagined his other half to be a foreign princess. But, it was only after several cries of we want to see Xi Yang happy, that I seriously worked brain and heart together and wrote The Sun's Dark Love.

Since Little Moon's Matchmaking Mission played with the idea of matchmaking and the ideas of choice, fate and destiny, I always knew that the Sun's Dark Love had to be about contract marriage. Haha! There were two versions of how this could play out - one version would be that the story starts after they were "forcefully" married, they would squabble, hate each other but slowly through getting to know each other in the seemingly mundane but loving details of marriage, fall in love. I do like romantic stories where the couple falls in love after marriage - one of my favourite cliches actually! However, I discarded that version since hand to heart, I cannot ever see Xi Yang being forced into doing anything he does not wish to do. So, it would I think diminish his character to have him marry someone he doesn't love - I could write it such that he has given up the concept of love, and is jaded enough to marry for procreation and political purposes, but that just did not fit with my idea of Xi Yang, so I left the plot of characters fall in love after marriage for another day.

As you can see, The Sun's Dark Love is the second version. I think there is a kind of beautiful circularity in how Xi Yang goes to find the Dark Princess to get her to break off the engagement (it's really the gentlemanly thing to do right?) and it ends off with Xi Yang insisting that they marry, right here and right now, death, blood and injuries notwithstanding.

For Xi Yang, I always knew that it couldn't be any other goddess in the Heavenly Realms. It had to be someone from outside - someone who would not only see him as the Crown Prince, but see him for who he was, all his goodness and all his flaws, give him as good as he got, and soften his hard edges.

And, for Wang Huan, this medicinal pig, she goes on this journey where she learns about so many things, but most importantly, that she deserves to be loved and is very much loved - which was why my favorite part of the ending is when she sees the Dark Lord and An Hun arriving to rescue her as well. I tried not to make Wang Huan a typical damsel in distress - though she gets captured twice for her blood (haha) - but I like that she will pretty damn well try and save herself even if she has limited powers. Wang Huan really grows into her role as future Empress later and becomes a really great Healer. I'm so proud of her for that.

Finally, the hardest part of writing The Sun's Dark Love was in being true to Xi Yang's love for Yue in Little Moon's Matchmaking Mission and yet having it make complete sense that Wang Huan is Xi Yang's true pairing. I'm not sure if I succeeded, but I definitely tried, and I wrote it being true to what I felt was the heart of all these characters.

Thank you again for reading! I look forward to sharing more of my imagination and thoughts in The Princess Who Cannot Marry (my husband really likes that story haha!).