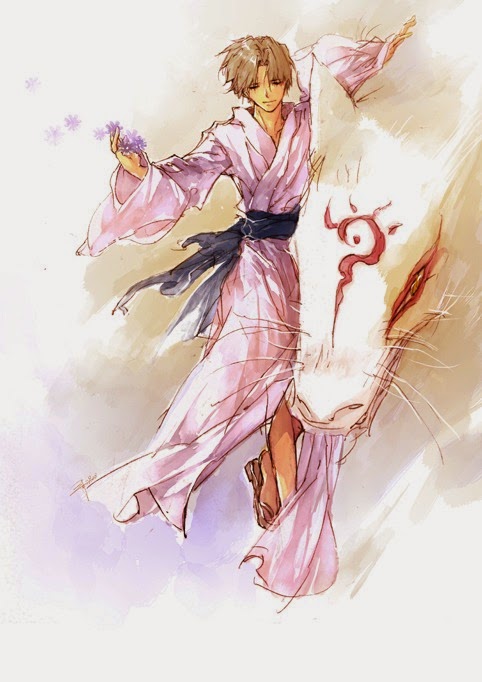 Merry Christmas, my dear readers! This isn't a particularly festive chapter (haha), but I do hope you will enjoy this christmas present from me. I think this is one of my favourite chapters. We are getting really close to the end!

Chapter 19: The Emotional Ties That Bind

When Yan Zun brought Wang Huan out of the Dark Realms, three individuals immediately felt her absence - the Dark Lord, An Hun and Xi Yang.

An Hun gave a respectful bow to the Dark Lord, a swift nod to Xi Yang and quickly left.

Xi Yang had never been intimidated before in his life, but even he had to admit that the Dark Lord's present aura was oppressive.

The Dark Lord silently presented a parchment to Xi Yang.

Xi Yang held the parchment in his hand. Although the writing was hurried, the words were indisputably written by Wang Huan, "I am eloping with Yan Zun - Princess Wang Huan."

Xi Yang lifted his eyes into the Dark Lord's own opaque ones. It was difficult to discern what the Dark Lord was thinking.

"If you allow, I will burn this," Xi Yang said calmly.

"This parchment is worthless," Xi Yang answered, "I don't know how but Wang Huan was forced to write this... she is waiting for me."

The Dark Lord gave a slight nod and the parchment in Xi Yang's hand turned to ashes, "There isn't much time before the auspicious hour. Even if you believe in Wang Huan, the fact remains that the bride is missing. And not only the bride, her personal maid, Xiao Mi and her childhood friend, Yan Zun, are also gone. An Hun will try and trace Wang Huan from his men in the purple desert, I have also sent my own men to check for traces in the Dark Realms... you should return to the Heavenly Realms to prevent the situation from escalating."

"I placed a very strong tracking seal on Wang Huan," Xi Yang said, his brows furrowed, "I don't know why I can no longer sense her presence anywhere..."

"She's still alive," The Dark Lord said calmly, his eyes clouded with a distant expression, "Her mother's divine heartstone was placed with hers, and will remain so as long as she is alive."

The Dark Lord frowned, "It's likely Yan Zun practised the forbidden arts like his father and have placed an even stronger shrouding spell over Wang Huan..." He shook his head, "He has taken Wang Huan with him at the cost of shortening his life. For what, even I cannot fully discern yet."

Xi Yang gave a deep bow to the Dark Lord, "I swore I would protect Wang Huan, and I will fulfill that promise even if I must pay for it with my own life."

I was first overwhelmed by an overpowering floral scent. There was something artificial about the scent - it smelt sweet, but the sweetness seemed to emanate from a core of decay.

I put pressure on my eye lids to open - to slowly rouse myself up to consciousness.

When I finally opened my eyes, it was dark. My eyes slowly got used to the candle light and that was when I saw a pair of coquettish eyes piercing straight at me. My heart jolted in shock.

The ends of her eyes lifted up slightly as if she was smiling. That was when I noticed that her skin was artificially taut. She was extremely pale, her skin like ivory bone but her lips were scarlet red, as if they were imprinted by blood.

My heart jolted again when I recognised her. She still appeared like how I first saw her - except, more like a marble statue version of herself.

"Don't be frightened," She said in a seductive tone as her fingers coolly touched my neck, "It has been so long since we have seen each other, Little Yellow."

I tried to move away and that was when I realised my acupoints were sealed and I could not move my limbs.

"If you look so horrified, Auntie will be hurt," She continued.

Yes, this was Yan Zun's mother. His sick mother, the mistress of the Spider Demon Tribe, Madam Xue Zhu (血株- xue is blood and zhu plays on the sound of one of the chinese words for spider). 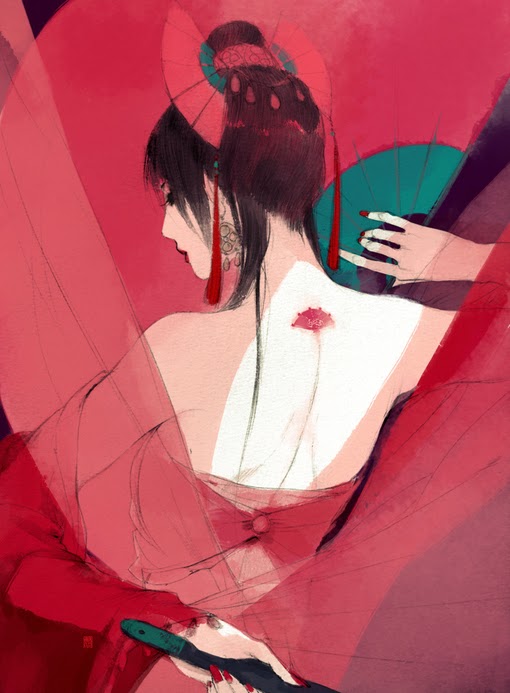 I tried to look around the room and realised that we were in a cavern-like place. In fact, we were underground.

My pulse started to race and I winced slightly as a long fingernail of Madam Xue Zhu cut a faint line on my neck. She touched the blood from that line lightly and licked it, "Indeed, the rumours are true, your blood is special."

She laughed heartily, "I'm not going to kill you. I've promised Yan Zun, you will be his bride, and I will only take a vial of blood from you each day... that should be enough to curb the poison inside of me."

I blinked at her in confusion.

"I'm sure you are touched," Madam Xue Zhu said as she pulled me up half-way on the simple wooden bed. That was when I saw Yan Zun was meditating in the corner of the room.

"More like he brought me here to be your blood bank," I spat out angrily.

Madam Xue Zhu gave me a cold bitter smile,"You don't understand the curse, Little Yellow, the curse on me. My father, the previous head of the Spider Demon Tribe, wanted to make the tribe more powerful, so when my mother was pregnant with me, he fed her the remains of one of our great ancestors, the black scarlet widow, who ate all her husbands. When I was born, I had to drink blood --- so much blood to survive. At first, blood was enough. I could lead a normal life, I married Yan Zun's father, the great warrior of our Spider Demon Tribe, and we were happy... so happy. But after I gave birth to Yan Zun... the blood was not enough."

I looked mortified at Madam Xue Zhu, "And that was when you started to prey on the divine heartstones of the minor immortals and gods?"

"Yes," Madam Xue Zhu closed her eyes for a moment then smiled faintly, "Funny how my father's wish caused the tribe's downfall. My husband kept my secret to the grave and we were banished out to the purple desert."

"There was nothing here... a wasteland," Madam Xue Zhu laughed bitterly, "A wasteland for us to die... and still, the Spider Demon Tribe sacrificed themselves one by one for me."

"You are mad," I said, my voice quivering with emotion.

"And, you, Little Yellow, is our saviour," Madam Xue Zhu smiled sweetly, a smile that did not reach her eyes, "In about half a day, Yan Zun should be able to stabilise his divine energy and both of you will go through the matrimonial rites. If you do not, I will simply eat you now."

"Oh wait," Madam Xue Zhu laughed to herself, "I almost forgot the important step." Madam Xue Zhu took a small blade and made a small cut on her wrist. She bled a sizable amount of blood into a small bowl.

I tensed but could not move. She forcefully opened my mouth and poured the blood in.

"Now, now, hatred is not a good look for a bride," Madam Xue Zhu smiled at me. She gave a cry to outside and two female servants stepped in.

"Clean her up for the ceremony," Madam Xue Zhu sternly commanded and left the room.

When Xi Yang returned to the Heavenly Realms, he immediately headed to the Temple of Matrimonial Bliss.

But she dared not say more when she saw the chilling expression on Xi Yang's face. Xi Yang asked sternly, "Where is the Moon God?"

"At the Tree of Red Threads," The Moon Maiden timidly replied, and even before she could finish her words, Xi Yang was already gone.

When Xi Yang arrived at the Tree of Red Threads, a large ancient tree in the Temple which was believed to be the divine source of the matrimonial red threads, he found the Moon God looking at the tree in deep thought. 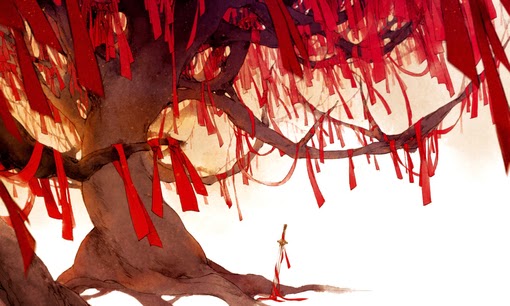 Xi Yang cleared his throat loudly and bowed, "Your nephew pays his respect to the Moon God."

"Xi Yang?" The Moon God stirred in surprise, "Shouldn't you be preparing for the engagement ceremony at your palace?"

It was painful for Xi Yang to voice it out loud, but he did, "Wang Huan has been kidnapped."

The Moon God frowned and quickly made a calculation with his fingers, "Indeed, this is a day of turmoil for both of you."

"I need to find her," Xi Yang said, his voice almost cracking, "I need to ask for a favour."

The Moon God's eyes rippled with astonishment for a moment, as if the Moon God had guessed what Xi Yang was going to request.

"You once said that you could see what I can't," Xi Yang continued, "The golden matrimonial thread that ties Wang Huan and me together."

"I never believed in the red thread and matrimonial fate," Xi Yang said, his voice intense with emotion, "Even when Yue was sent down to the mortal world, I didn't believe that her past fate with the future Yan Emperor would be stronger than my hundred years with her. But, after I met Wang Huan, I felt it --- this emotional thread that was strung tightly, deeply, wound round over round over my heart. When she aches, I ache - when I go away from her, it feels like I am moving away from my origins, the yearning in my heart only eases when I see her again. So, I believe, the Moon God, I believe - there is a golden thread tying between Wang Huan and me."

"I ask you to tell me how to see it," Xi Yang stated in a strong determined voice.

The Moon God looked mildly perplexed, but he finally sighed and said, "I cannot help you see it, but I can help you feel it. I can make the golden thread real... but it will be extremely painful, like a thousand needles piercing into your heart, and you can only travel towards Wang Huan, as you walk through the pain."

Xi Yang smiled, and his smile dazzled the Moon God for a moment. It was pure, devoted and passionate, "Do it."

As the Moon God flicked his hand to begin the enchantment, even he felt the sharp stabbing piercings from his motions but Xi Yang's face never once winced. His determination never wavered.

"It is done," The Moon God said quietly as he watched Xi Yang stepped forward, his palm on his heart. He would feel a cutting deliberate pain, like an arrow being pulled tight on a bow, except that bow is your heart and the arrow is the thread - never to be released, only plunging deeper into your heart with each step.

"I will go with you," The Moon God added worriedly.

Xi Yang shook his head, "I need you to stay here to control the situation and make sure the engagement ceremony will go on."

The Moon God watched as Xi Yang left in what felt like the roaring blaze of the morning sun, "She is waiting for me, and I cannot fail her." 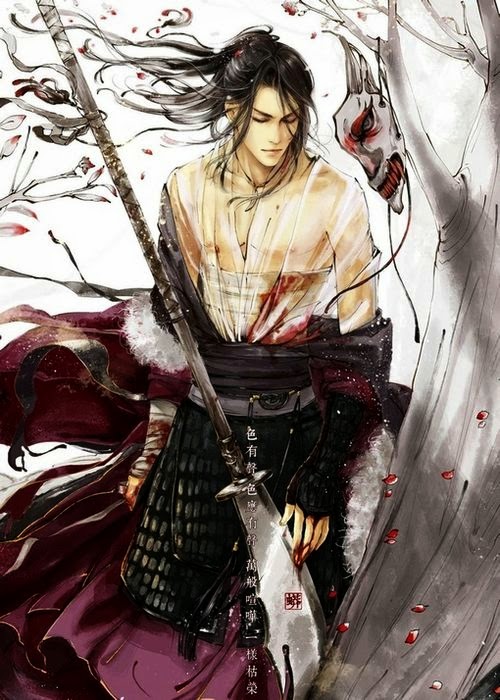