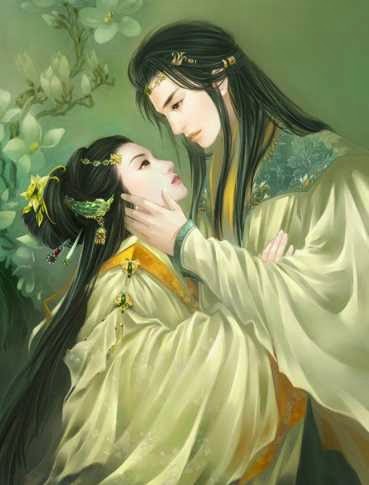 I've been feeling dreadfully under the weather! But, I really want to update The Sun's Dark Love even if it's only a short chapter. Chapter 17 will be much longer!


Chapter 16: The Wishes We Plant


As Xi Yang lifted his head, Wang Huan's eyes followed the slight ascent of his face. She was caught between joy and embarrassment.

"I haven't agreed," Wang Huan protested, her face reddening at the memory of the kiss and Xi Yang asking to make the engagement real.

"Oh," Xi Yang looked thoughtful, "Then, I guess I will take my request back."

"A request?" Wang Huan narrowed her eyes, "It was more like a command."

Xi Yang laughed lightly, "Indeed, since it was a command, why must you agree?"

"I'm sorry," Wang Huan smiled politely, "You may have misread the situation. This is the Dark Realms. I'm the Princess of the Dark Realms and you have no jurisdiction here."

Just as Wang Huan was going to turn around in frustrated annoyance, Xi Yang gripped her wrist and halted her motion.

"I was teasing," Xi Yang said lightly, "Only teasing."

"Which part?" Wang Huan turned her face and looked pointedly at Xi Yang. The kiss? Those words?

Xi Yang furrowed his brows, "Now you have got me confused."

"Then, imagine how I feel!" Wang Huan said sharply.

With a quick stroke of his hand, Xi Yang inserted a hairpin into Wang Huan's hair.

Wang Huan raised her hand and touched it. It was cool and comforting - she could sense that the hairpin was made of wood and at the decorative end of the hairpin were soft lustrous flower petals?

"Don't take it out," Xi Yang said softly, "This was my mother's hairpin. Those petals were the petals she shed when she achieved goddess-hood - the true petals of the camellia flower that would never wither. The wood of the hairpin is from a branch of the sacred tree of Mother Nature."

Wang Huan felt her heart jolt slightly - this hairpin... it was too precious.

"I don't know the right words to say," Xi Yang began, "I don't actually talk to people... I only command. It's likely I will never be able to say anything to please you. But, Wang Huan, be mine."

"I can't be yours," Wang Huan said coldly.

Wang Huan's hand moved away from the hairpin. Her hand slowly started to rise higher and higher and then her hand started to fall downwards with increasing speed as if she was going to slap Xi Yang. Xi Yang remained undaunted - his eyes unflinching. Her hand fell on his face lightly... she pinched his cheeks. She laughed, "Why can't you belong to me instead?"

Wang Huan brought Xi Yang to the furthest room in her courtyard. It was empty - there was only a golden door ring latched onto the wall.

Xi Yang followed Wang Huan silently as she walked towards the golden door ring. Wang Huan bit hard on her finger and she dropped two beads of blood onto the door ring. An immense light started to emanate from the ring and Xi Yang felt his body being enveloped in a warm light.

When the light dissipated, he saw that he was in a field of flowers. He sniffed the air - he was bathed in a sea of lavendar.

There was a marble tombstone in the middle of the field. He saw that Wang Huan was already kneeling before it.

She smiled, "Mother, I've brought the god I am going to marry."

"He is the son of the Jade Emperor. The Crown Prince of the Heavenly Realms. He is so arrogrant, opinionated, domineering, spiteful." Xi Yang turned to look at Wang Huan.

"He always threatens me and calls me a medicinal pig," Wang Huan added, oblivious to Xi Yang's exasperated glances.

"But, he keeps his promises," Wang Huan smiled, "He brought me to eat the food you wrote of in your diary. He protected me from the Scorpion Demoness. He ate my oily food even though he hates oil," Wang Huan especially laughed at that memory, "Most of all..."

Wang Huan closed her eyes and whispered the last words silently, as if telling her mother a secret. When she opened her eyes, there was a light veil of wetness.

Xi Yang took Wang Huan's hand into his. He bowed his head to the ground respectfully three times, "Future mother-in-law, I promise you that I will take care of Wang Huan for the rest of my life. I will make her happy."

Wang Huan suddenly looked thoughtfully at her right as if there were sounds.

She turned to Xi Yang, "My mother wants you to promise that you will bring me down to the mortal realms as often as I want to eat good food."

Xi Yang grinned, "I promise that I will feed Wang Huan so that she will be the fattest medicinal pig in the universe."

Xi Yang smiled elegantly, "I am calling myself a man who fell in love with a pig."

This was the first time Xi Yang had ever said the word "love" to Wang Huan and she was rendered speechless.

As Wang Huan and Xi Yang left the field of flowers and returned to the room in Wang Huan's courtyard, Xi Yang cast a few more glances at the golden door ring.

Wang Huan smiled, "The Dark Lord created this special space in memory of my mother. Only my father and I can activate the door with our blood." Wang Huan looked wistful, "When she passed away, she left nothing... her divine heartstone was completely eradictaed."

Wang Huan looked at Xi Yang without being able to comprehend.

"To save just a fragment of her dissipating divine essence --- how difficult must that be? What the Dark Lord has created is a small separate dimension - almost like a black-hole. A space that locks a moment in time forever - in order to do so, a great god must kill a part of himself, such that in order for the universe to balance itself out from that tremendous negation of power, it creates a separate dimension. In that closed up space, lives - no dies both your father and mother together."


Comment: The original chapter 16 is much longer - there's still more bits (that I have not written yet) on Wang Huan and Xi Yang, and we will get to see Yi Mei, Yao Feng and Yan Zun as well. I'm going to move those parts to Chapter 17 instead.

Ah, how I missed writing The Sun's Dark Love. I hope I do get better soon because I wanted to finish the story before Christmas.

One of my favourite things writing about Wang Huan's story is how she learns that everything she knew about her life is not what it seemed - that when she thought she was deserted, she was actually being protected. That all along she only knew the tip of the iceberg of how much she was loved --- and even now, she is still learning what it means to love and be loved.

I think the first meeting of Wang Huan and Xi Yang pretty much captured their dynamics. Their love is in no way a deep love, or even a matured love. It is something that is just beginning - a  mutual promise.