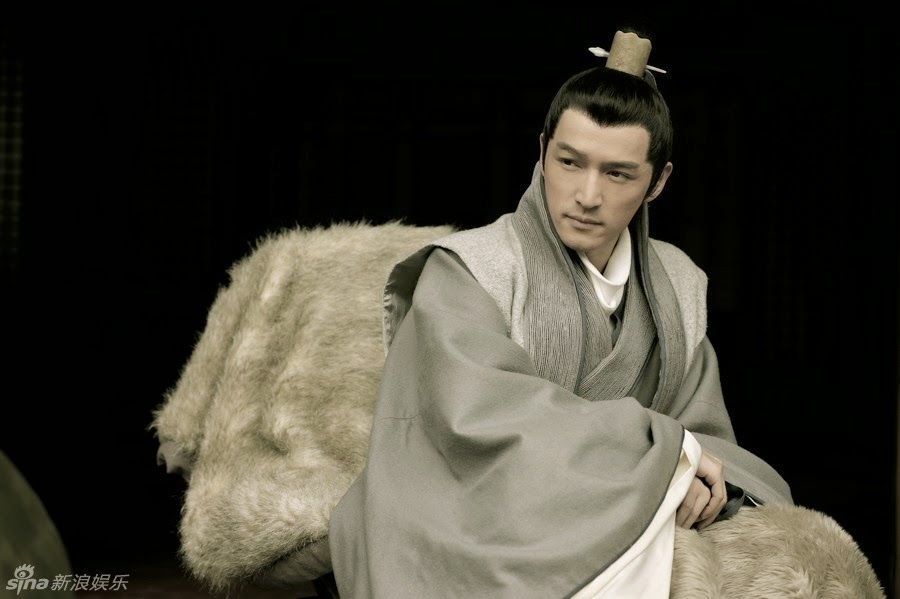 I think Hu Ge's pictures in The Nirvana of Fire perfectly matches what I think Night appears to be when he has ascended the throne as the First Emperor. Although Night is the First Emperor, he wants Jin Mi to still see him as Night or even more than that. Even Jin Mi's own maid tells her that her heart should not hanker for another. But, as we have long known, Jin Mi will not be Jin Mi if she has always listened to the good counsel of others.

"The Great God's constitution is naturally 'yin' and cold, but the surrounding is 'yang' and hot. It is not suitable for the Great God to stay long, may the Great God quickly return. If anything happens to the Great God, the First Emperor will be worried and upset again."

I lifted up my sleeve, wiped the beads of sweat on my forehead and then fanned my face, "It's fine. It's only a little hot and not as serious as you say it is. You can relax, the First Emperor is busy with work, he will not have the time to worry about such small matters."

Li Zhu is the female immortal attendant Night had tasked to serve me. She's good at everything but also has the ability to make a mountain out of every molehill. She always loves to end her "advice" by telling me "the First Emperor will be worried and upset again". So young and she is already so naggy, she will be truly invincible once she becomes an immortal granny.

I shook my head and let out a sigh for her.

Li Zhu seeing me let out a sigh, immediately became stern as if meeting a huge enemy and started to nag again, "Why is the Great God sighing? Pardon me for speaking, but some things that have passed, you should just let them be, even the mortals know to move forward towards the future, what more a Great God with years of cultivation? If one is able to look beyond, one will learn to be content. What's more the devotion shown by the First Emperor towards you, if the Great God's heart longs for another, the heart of even a follower like me will turn cold, what more the First Emperor..."

My head was attacked by my usual stabbing pain. I took out a sweet to suck in my mouth and stopped her, "It's warm here, I will sit for a while. You can go back first and feed my Nightmare Beast."

"Great God... this is the fiery mountain outside the place Lao Jun makes his pills, how is this warm? Besides, the Nightmare Beasts eats dreams, where will Li Zhu find enough dreams to feed him?" Her face was contorted.

"This Nightmare Beast has followed me for many years and is not picky with food. You can simply feed it some leaves and sticks," Li Zhu appeared to still want to speak, but I waved my hands and sealed her mouth. She looked at me unwillingly as she retreated back.

Today was the day Tai Shang Lao Jun came out of his meditation to open his stove to make pills again. I had long heard about the good news and came searching for him. Who knew that the little grandmother Li Zhu will follow me, but thankfully I managed to chase her off so that my ears can have their rest. Even the steam from the pill stove no longer seemed so uncomfortable.

It was noon, I neatened up my robes and passed my 'bai tie' (an olden day form of name card) to the door attendants. In a while, the immortal attendants returned and respectfully brought me inside. Their heads were lowered and they did not dare to look at me.

According to Li Zhu, after Night managed to entangle himself out of the golden ropes, he took advantage of the chaos from the surrounding gods, the heavenly generals and soldiers to take control of the Heavenly Emperor. It was easy for Night to gain control after the Fire Deity's army lost its main commander. The Heavenly Realms held an important meeting and Night listed out all of the Heavenly Emperor's crimes. Because of Night's good reputation, the crowd was appeased and he was supported as the next Heavenly Emperor. The former Heavenly Emperor was exiled.

I did not care about who became the Heavenly Emperor. But ever since I was named the Water God by the former Heavenly Emperor, all the gods would treat me respectfully but also with a trace of fear, as if I was some water monster.

After we walked through the confusing 'ba gua' formation of the courtyard and even before we entered the main hall, we were narrowly knocked by an immortal attendant carrying a special medicine.

"You should watch the road carefully!" The immortal attendant quickly blocked me.

I flicked my robes and was about to enter the main hall when I heard this familiar call.

I carefully looked at the person's face, ah, wasn't this the little soil god that taught me about the four pleasures of the mortal realms! Since it was so rare to see someone who dared to look me in the eye, my heart warmed and I greeted him comfortably, "Little soil god, we haven't seen each other for a while. Are you doing well?"

"Ah! It is Gentleman Lin Guang! I am ignorant and did not know that Gentleman Lin Guang was a Great God. Forgive me for being disrespectful," The litte soil god pressed both his hands together into a fist respectfully at me. He answered deferentially, "Little immortal has been doing well. Although the surroundings are hot, it is not bad. I can often pick up the scraps of unwanted medicine from Lao Jun's stove and increase my divine essence."

I paused for a moment then lightly replied, "Water."

"Water God!.... Fire Deity... so it turns out..." The little soil god blurted out, immediately his gaze towards me changed and became identical to how the other gods viewed me.

I took a sweet from my robe sleeve and placed it in my mouth. I cast the stunned look from the little soil god behind my back as I stepped into the main hall.

Lao Jun had just entered the hall and he quickly respectfully greeted me, "Greetings to the Water God." After he led me to a seat, he ordered the immortal attendants to bring tea. He stroke his long white beard and asked without haste, "I wonder why the Water God has come from afar to find me today?"

I liked this old man's straightforward personality. "Little god has long heard about Lao Jun's great skills in making pills, they can return someone to their youth, or even bring the dead back to life." I paused, looking at the ash behind his head, and continued, "I even heard of Lao Jun making three 'Jiu Zhuan Jin' pills which can call back the souls of the gods and increase the god's longevity. I came here today to ask for one of these 'Jiu Zhuan Jin' pills, will Lao Jun be able to part with one?"

Tai Shang Lao Jun's hands paused in mid-stroke of his beard, he appeared to be slightly surprised. The green cow sitting next to him raised up its head to look at me then continued to snore.

I waited as Lao Jun's expression changed from sadness to hesitation to unwillingness to helplessness in the timing of one tea pot. Then, I waited as his expression changed from helplessness to unwillingness to hesitation to sadness in the timing to burn one scented incense. Finally, he sipped tea and slowly answered, "The pill's effectiveness is not as miraculous as what the Water God has said. A god has seven souls, after forty nine days, unless one part of the soul or body is still present, my 'Jiu Zhuan Jin' pill will have no use." He looked at me and continued, "Does Water God want this pill to call back the former Water God? If I may speak bluntly, the Water God's soul and physical body has long disappeared, thus the pill will have no use."

My grip tightened on the tea cup, then loosened, "My father has long passed and I no longer wish to bring him back to life. Today I come asking for the pill for another use... if Lao Jun would give this pill to me, Jin Mi will be eternally grateful, if you ever need help from Jin Mi, I will be more than willing, even if it means I have to step into a pool of fire."

Lao Jun finally said, "I need to consider it over a day. Please come again tomorrow."

I already knew that to make these pills needed three thousand and six hundred years. They were extremely rare and I could not force Lao Jun. Before I left, with every step, I turned back three times to give an earnest look.

When I returned to the Four Stars Palace, it was dark and quiet. From Night's window, I could see the glimmers of light from a lamp, he must still be working. I lightly passed his door and was going to return quietly to my room, but I heard the door open and Night asking from behind me, "Jin Er, you have returned?"

My heart gave a sigh as I turned back, "Indeed, Night has not slept?"

He walked forward and flicked off a dew of water from my hair. He smiled, "If you have not returned, how can I sleep? I have told you before, you can call me Ren Yu." His voice was soft, as if he was coaxing me.

I coughed and lowered my eyes, "How can the name of the Heavenly Emperor be so easily called? I do not think it is proper."

He reached out my hand to hold my palm and said, "If we cared about such rules between us, it would cause us to feel distant."

I said wearily, "I am a little tired. You should also go and sleep."

He lowered his head to gaze into my eyes, he spoke as if casually, "I heard that you went to Dou Shuai Palace to ask for the golden pill?"

Big mouth Li Zhu! I looked down at my toes and said, "I was only casually walking."

A glimmer flashed across my eyes and I replied, "I have misfortune in my life. Having the golden pill with me can protect me in times of need."

Night lifted up his head to look at the stars then turned back to look at me and said, "Whatever Jin Er wants, you can tell me. I may be able to help."

I hurriedly lifted up my head.

He gripped my palm then let go, "The night is dark. You should go and rest."

Comments: Whenever Night describes about the 'night', I can't help thinking he is describing himself. Even though I consider myself a Night fan (though I'm Jin Mi & Phoenix all the way), I am also pleased to see that Night has to learn the painful lesson that being on top of the world does not mean you will gain your heart's desire.

I have always liked Jin Mi - yes she can be callous and shameless, but she has always been true to herself and her own 'logic'. I can't help liking her even more after she spat out the Unfeeling Pill, she does not shy away from the burden of guilt she has to bear, but in fact, moves on to do something about it.
Posted by Decembi at 00:04