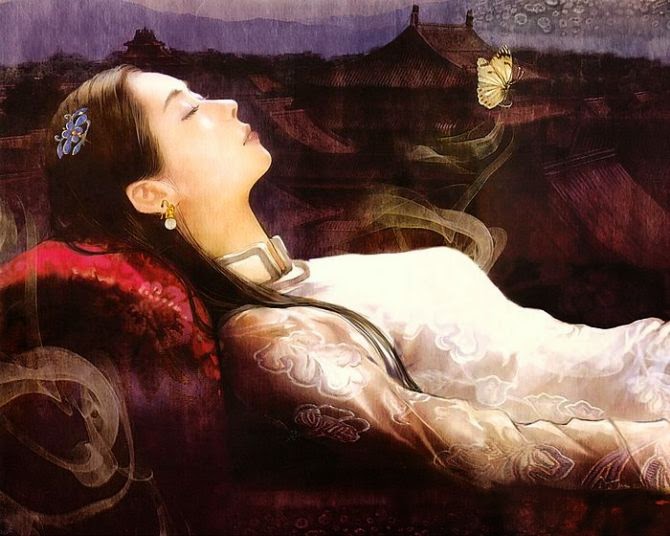 I try not to reveal too much of the story in the opening comments of the chapter to avoid spoilers. But, as you can tell from the previous chapter, everything changes after chapter 19. The changes are irrevocable --- you have to pay the price of what you choose. And, unfortunately, even the greatest sweetness cannot overcome the bitterness of truth.

I turned around, opened my eyes and saw two female immortal attendants at the head of my bed. I tried to lift up my body with my arm, but who knew that my arm would soften and I would fall back onto the bed.

"Who is singing opera outside?**" I asked.

One of the female immortal attendants' eyes opened wide and she turned around to start to run outside, along the way she shouted, "Quick! Quick tell the First Emperor! The Water God has awaken!"

The other female immortal attendant was more serious. She looked at me and her voice shook a little as she spoke, "The Water God has slept for half a year and has finally awoke. The First Emperor has been worried all day and night."

I furrowed my brows and asked again, "Who is singing opera outside?"

The female immortal attendant replied, "The First Emperor ascended the throne today. In celebration, the gods had set up a stage to sing opera from the mortal realms."

I closed my eyes and asked, "What is being sung?" 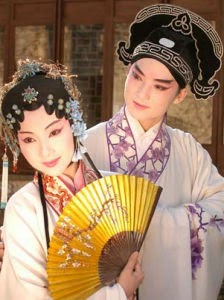 "Fire Deity...?" She looked confused and did not answer. After I pulled her sleeve and repeated my question three or four times, she carefully replied, "Fire Deity... didn't the Fire Deity incinerate into ashes half a year ago?"

"Hong Long" there was a huge rumble and I felt something explode in my head.

His every furrow, smile, raise of the hand...

I held both my hands and felt a stabbing pain in my chest. I scrunched my body at the edge of the bed, it was so painful I could not straighten my body, it felt like my heart, guts and lungs were all being dug out alive and then splattered in blood and left lying on the ground. I twisted my wrists, I twisted it forcefully, wondering why what was being cut off were not my hands?

I hurt so greatly that my toes were knotted like I pulled a tendon. I looked at her in loss and terror, "Quick! My heart has disappeared! I have lost my heart! Help me find it! Quick! It must be somewhere in the house! You must find it! It's so painful, so painful I could die." I held the empty part of my chest and bunched into a ball.

"If it's not on the bed, look below! Look outside the room! It must be somewhere!" I started to cry. The heavy pain would not cease.

"What are you finding?" Someone entered the room, a long figure, golden robes.

I paused with my eyes full of tears. Everyone was quiet.

"Find a heart... First Emperor... the Great God wants me to help her find a heart... She says her heart has gone missing..." The female immortal attendant murmured as if she had lost her soul.

The beautiful image of paradise was destroyed all at once. Phoenix has never once called me Jin Er... my chest was stabbed again by a knife, blood and flesh was mixed into one... I was troubled and wrung both my hands, my throat felt like it was broken.

Night grabbed my hands and placed me in his arms. He patted my back and lightly said, "No, you will not. I am here, why will Jin Er die? What's more we must hold hands for ten thousands ten hundred thousands of years, even when the realms grow old, it will not be enough. Jin Er has only slept for too long and your body is not used to it."

"Where is it painful?" Night gently looked at me, "I will give you energy to lessen the pain?"

I pressed my chest and only felt the pain spreading from the chest to all four of my limbs, like a needle stabbing. I could not tell where was the pain, it felt like the pain was everywhere. I scrunched up my body, the tears would not stop falling, "I do not know. I don't know where it hurts... it's so bitter, my mouth is completely bitter. Save me..."

Night smiled, "If you eat a sweet, it will no longer be bitter." He transformed an icy sweet and personally fed it into my mouth.

The sweet melted in my tongue, but I only felt my throat became more bitter, so bitter I squeezed my eyebrows and spat it out. I saw that the tongue was dyed blood red. So it turns out only Daddy's icy sweet is sugary, but, Daddy is no longer around...

Night looked at the sweet that was covered in blood. His brows were downcast as he used his fingers to transfer divine essence into my back, "Don't be worried, Jin Er, it will be ok, everything will be ok."

I choked with sobs until my throat was so dry it could not release any more sounds. The droplets of tears kept falling down my cheeks, as if it would never stop. I did not know why I was like this... as if someone had cast a voodoo worm on me, I grabbed Night's hand, "I must have been struck by a voodoo spell from the mortal realms. Can you solve it for me?"

"Yes, I will solve it for you, Jin Er, don't be scared. I am here," Night mixed a healing tablet with honey water for me to drink and to slowly let my feelings of terror subside. I gradually felt more tired and slowly fell asleep, but even my dreams had a shadow of pain.

I did not know how long I slept - how many days, how many nights, such that I finally slept away the pain, slept the bitterness from my throat until it seeped into the very finest strands of my hair****.

When I finally awoke, it was spring. The glow of spring entered from the windows and I could hear the birds singing in the yard. Someone's back was facing me and playing the 'qin' (stringed musical instrument), I heard the tall mountains and the rivers flowing.

Barefooted, I walked out and passed the person playing the qin.

"Jin Er, you have finally awoke. Please don't continue sleeping like this? I'm afraid that before I have the chance to marry you, to love you, you would have slept until the lands grew old."

I did not dare turn back to face the person at the qin... actually, I did not dare to look at the qin, because there was once, someone tall and proud whose back had faced me as he played the qin*****. In the end, that qin, broke; that person, left.

I touched my cheeks, they were dry without any trace of moistness. So it turns out, even tears will change directions, although they had became a river in my chest, not a single drop will appear on my face again.

Night hugged my waist from behind, he placed his chin lightly on my shoulder, "Jin Er, look - the flowers have blossomed. When shall we wed? Is this spring good?"

I gently moved away and did not answer.

Yes! The window has opened, the flowers have blossomed again, but why can't I see you?

* The actual Chinese title is 密糖之伤 - 密糖 means honey and 伤 means hurt/injury. I have translated it as "The Hurt of Honey" which is rather awkward, but what I think Dian Xian is trying to express is a hurt that is both painful and sweet.
**The chapter actually starts with a few lines of opera, but it's too complicated and has not much narrative value so I don't plan on translating those lines.
*** Here's a link to the video if you want to see what type of opera Kun Xi is! 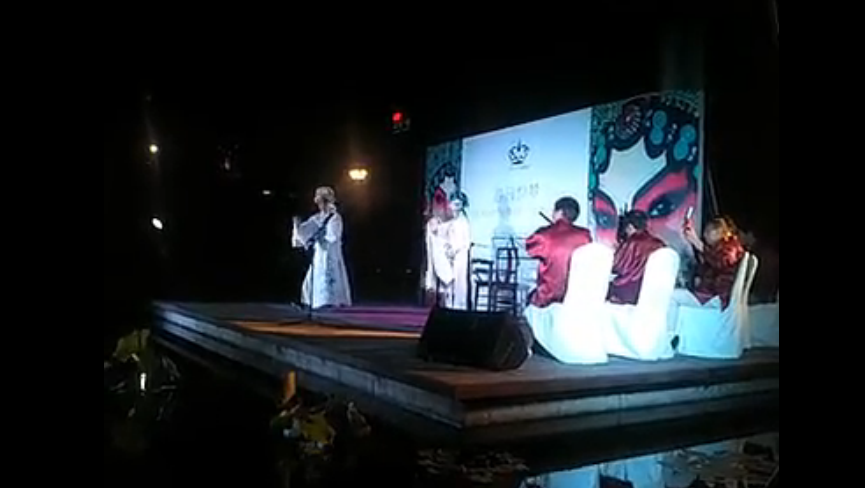 **** I love how there's a duality in the pain that resides in her and how she describes the pain as seeping into her hair. Even if she is not entirely conscious of it, it is clear her pain lies in the emotional thread she had cut away when she thrust the blade into Phoenix.
***** To read about the last time someone had played qin for Jin Mi with the back facing her, click here.

Comments: I found this chapter really beautiful - the longing and pain. Jin Mi deserves this and doesn't deserve this at the same time. I found it very apt that Jin Mi described the pain in her heart as if someone had placed a voodoo spell on her or a voodoo worm ... if you read the earlier chapters, everytime she had felt a stirring of emotion from Phoenix, a pain in her heart, she had described it as a worm biting her heart, like a decay of the Unfeeling Pill inside of her.

Night may try and heal her bitterness with honey and sweetness, but perhaps the title hints that that honey sweetness could be the greatest pain of all.