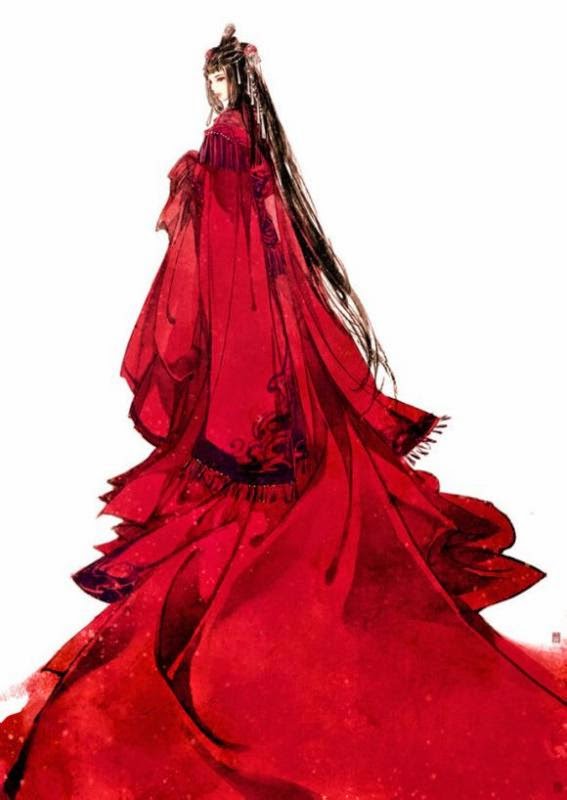 Hello! I'm back! I have been overwhelmed with work in the last two weeks so there were only sporadic updates. Now my schedule is clearing up, so do expect much more updates over the next few days. I have even been getting emails asking for more The Sun's Dark Love! Aww, thank you sweethearts!

Now, this chapter is EPIC. This is what you have all been waiting for.


Chapter 19: The Emotional Threads are Deep and Mysterious (Part 4 of 4)

Night lightly said, "Nothing. Whoever wins will be Emperor, except I was lacking, the mantis is stalking the cicada but does not know that the yellow sparrow is behind it."

Phoenix calmly looked at Night whose powers has been bound by golden ropes, "Your saying on the yellow sparrow is not truly accurate, today Night has merely been the silkworm that spins its own cocoon, caught in a trap of your own making."

"We are loyal to the Night Deity and are willing to die for him!" The soldiers that had rushed in just now started to shout. In a moment, the soldiers rushed towards the surrounding gods to hold them as hostages. Most of the gods were scholarly types and naturally were easily overcome by the soldiers.

But, Phoenix was already prepared. With a flash from his eyes and a command from him, even more soldiers rushed from outside to stop Night's rebellious soldiers, in a moment, the celebratory hall became a battleground of swords.

The Heavenly Emperor was incensed. He slapped the golden arm of his throne and was about to rise, but even before he could stand properly he suddenly fell back into the throne. He looked stunned at Night, "What water did you give me to drink ?!"

Night answered without haste, "Something that will take away your powers for four hours*."

"You!..." The Heavenly Emperor looked completely devastated and was rendered speechless. The Moon God helped the Heavenly Emperor and looked at Night in anger, "Night, I always knew your heart was deep and calculative, but I never knew you were unfaithful, disloyal, and unfilial. Aren't you scared of divine retribution?"

Night lightly looked at the Heavenly Emperor and said, "Someone who is unfaithful, disloyal and unfilial, how can he have any right to demand that people are faithful, loyal and filial to him? To ascend to the throne, the Heavenly Emperor himself killed his brothers, forsook the Flower Goddess, married a wicked goddess, humiliated my mother, abandoned his son. If it was not to battle the Demon Tribe, would he have summoned me back? He also brutally separated the Flower Goddess and the Water God - he made the Wind Goddess marry the Water God and destroyed the Flower Goddess after poisoning her. Later, he also ruined my mother's wedding fate with the Fish King of Eastern Seas, abandoned her and let her be killed. If there is divine justice, then his retribution should come."

The Heavenly Emperor's colouring on his face withered.

"Night does not ask to be free of recriminations, but in my heart, I want to repay my debt to my mother for raising me," Night looked at me calmly from afar, even his deep red robes could not shroud the peacefulness emanating from inside of him, "I have no regrets this life, except I only owe one person."

I returned his gaze then turned away to look at the heavenly generals who were fighting with each other. Night's soldiers were weaker and it looked like victory was about to be gained by Phoenix's men. Phoenix calmly stood in front of me, "Do not look, be careful as the blade has no eyes." He raised his palm to attack some of the soldiers, in the centre of his palm grew fiery flames and the rebellious soldiers immediately burned to death.

I looked at his wide shoulders and back, then followed his movements and looked carefully at his palms, looked at the flames burning within the palms. In these three years, I have repeatedly looked at both of these hands, every line and curve I could remember clearly, telling myself that these were the hands, this was the Red Lotus Flame that had taken away my only father, incinerating his soul.


I did not catch what Night said and only heard him emphasising the four words, "Debt for raising me."

The surrounding voices started to fade and I could no longer hear anything or see anything - only the heavy thunderstorm that day. I had woken up alarmed by the sound of the rain, and I saw Daddy sleeping at the edge of my bed. His eyes wearily opened and said gently, "Sleep a while more, I will go get your medicine."

Daddy's immortal attendant that always accompanied him tried his best to escape, he crawled to my room door. He had no more energy to even spit out a word but using the last of his strength he repeatedly made the same mouth gesture.

I pushed away his corpse and rushed to the stove. I personally saw Daddy's ashes slowly disappearing. I anxiously reached out my hands to stop it, but only managed to capture a sleeve of his robe that was half destroyed. There was still some warmth left, but the person has disappeared, only leaving the light warm feeling of steam.

I finally realised what the immortal attendant had been trying his best to say - "Fire".

Everyone knew that there was only one thing that could destroy the Water God - the Red Lotus Fire.

Everyone knew that only two people could use the Red Lotus Fire - the Heavenly Empress and the Fire Deity.

Since the Heavenly Empress was in prison, besides Phoenix, there was no other...

The memories in my mind were shredded and combined repeatedly, my head hurt, hurt very much and I closed both my eyes.

"Jin Mi! Jin Mi?" Phoenix turned and called for me gently in my ear.

"Nothing," I lightly replied.

"Don't look any more," Phoenix unhesitatingly blocked my view and turned to face the front again. He reached out his hand towards Night, his fingertips blossomed a bright lotus flower, the winds in the Nine Mist Clouds Palace started to grow strong and caused his robes to fly, he said proudly, "To fight on some more will only cause the innocents to die. Today, I fear that the rebellion will only stop with the destruction of the Night Deity."

At this moment, I could not see Phoenix's face. I could only see his long spine, his back facing me, like an opened door. I saw the light that beamed through and I smiled, indeed, the books on love did not cheat me.

Indeed, he had placed my hair in the most important place, repaying my efforts of seducing him for the last three years. It turned out that his central divine core was not between his brows but in the middle of his chest!

I lowered my head and looked at the ice blade shaped like a willow leaf, thin like a leaf, translucent like ice, sharp on both sides.

In a moment, I stabbed it through the centre of Phoenix's back. 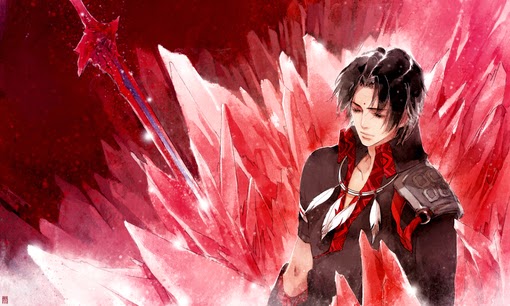 Daddy, I once said I will repay you, but I did not know what I should do. Today, now, I personally killed the person who murdered you, is this fulfilling my filial piety to you?

I did not hesitate and used my entire strength to press the blade into that unprotected back.

I saw it enter without any obstruction... I personally saw it go through the emotional threads (her hair), and forced through the front of his chest...

On the blade, one drop of red blood slowly surfaced, in that one drop, a little flower blossomed, bright red.

The four surroundings were silent, so silent I could hear the flower blossom.

He leaned on my chest and slowly turned around, his nose tip touched my nose tip, we were so close I could not see his face clearly, only the shocked black pupils in his eye, I could see my entirely face in his gaze, looking clearly at my honest betrayal.

When we spoke, we were so close, so close that our lips lightly grazed each other... it reminded me of an afternoon, many afternoons, the clouds were light, the winds were clear......

But, he had no more words.

I never understood what was love, only reading those thick books to try and understand the emotions and actions they described. I learned how to make my face red, I learned how to appear like an embarrassed girl.

Who will tell me if I have learned well...?

His warm blood covered both my hands and seeped through my matrimonial robes. The red blood on my red robes blossomed flower after flower of dark red petals.

His phoenix eyes were closed, like a child deep asleep. I slowly saw him become translucent, become thin, disappearing like the ashes swept away by the wind... finally, he became a flame. In a moment, everything behind me was destroyed by the flame. But I, carrying the Great Phoenix Feather Treasure, was unharmed......

"Jin Mi, you know my heart. Even if you will curse me, hate me, I will not let you marry Night!"

"What is going to hell? There is nothing in this world that I am afraid of!"

"Jin Mi, I think, there will finally be a day where I will kill you."

"Will it still count if you give me these pieces of paper now?"

"Don't worry, no matter how good these goddesses are, they cannot enter my heart. In this wide world, only one person lives in my heart. In my life, I will only marry that one person."

A strong energy pursed through my heart and I fell to the floor, spitting out a mouthful of black blood. A pearl of sandalwood rolled in the blood then disappeared.

*He meant two of the 12 two hour periods the day is divided into.

Comments: So epic right? It's clear that the running theme for this chapter is filial piety and what a child's duties to his or her parents should entail... especially against the other emotional thread that one runs against - passionate, romantic love.