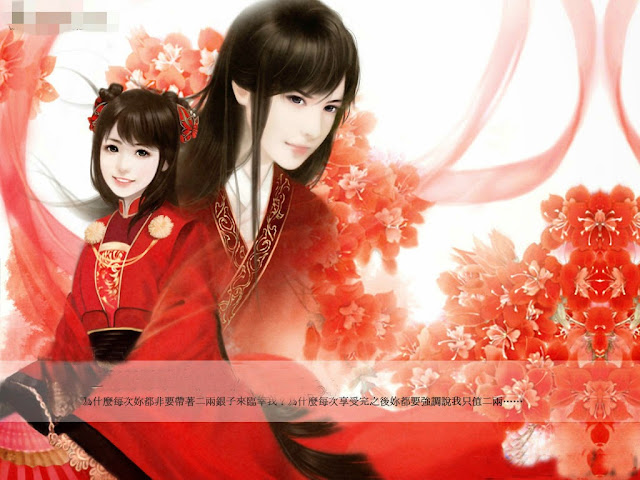 It is Night and Jin Mi's big wedding day! All the gods from the six realms have gathered at the Heavenly Emperor's Nine Mist Clouds palace to watch the beautiful couple tie the knot. But, will everything go as planned?


Chapter 19: The Emotional Threads are Deep and Mysterious (Part 3 of 4)


"The auspicious time has arrived! Raise the sedan!"

On the eighth day of the third month, as the sun sets and night arrives, the twenty four flower leaders stood in two rows to send me off. The flower sprites and immortals, the insects, the worms, all the sprites gathered at the Water Boundary, and even gathered at the three continents and ten islands that laid outside the Flower World. A route of a thousand miles, three thousand, six hundred and sixty six flowers were arranged to form a blossoming long carpet to lead the way. The sixteen immortal attendants who had arrived to pick up the bride were decked up in ornate costumes and carried the sedan up with respect and grand ceremony.

I sat in the large sedan, my head was covered by a red matrimonial veil made from threads from heavenly silkworms. The veil blocked my eyes but luckily the red matrimonial veil was not knitted in small tight stitches and there were gaps that allowed some light to go through. I could still roughly see what was happening outside. All the strange flowers and fauna in the flower world had gathered around the route the sedan was taking and the dense and strong flora and fauna smell caused me to feel giddy in the sedan.

In a while, I felt the sedan land.

The cloth covering the sedan was lifted up, I saw a clean long white hand reach in, the aura was magnificent. A gentle voice spoke in a low tone, "Jin Er." This was Night.

I placed my hand in his palm and was lightly guided out of the sedan by his grip.

Suddenly, the playing of the musical instruments reached its crescendo. Many colourful butterflies started to fly, the cranes started to dance. 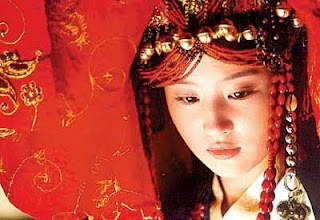 I stood shoulder to shoulder by Night, gazing at him through the red matrimonial veil. He wore a jade dragon crown, a grand red matrimonial robe, his brows were dark and his eyes were clear, his expression was elegant and distinguished, he gave off a light shining aura like a pearl. Compared to the surrounding noise of the crowd with the striking bold wedding decorations, he was like the morning dew in the midst of dark ink, always remaining undisturbed and untainted by the surroundings.

He smiled and looked at me. He very solemnly took my hand and led me through the immortals who had gathered from the six realms to watch the ceremony. The Nightmare Beast that I had not seen for ages had a red flower ball on its neck as it followed me, every now and then it would lower its head and nervously peek at me from under my red matrimonial veil. When it saw me glaring at it, it would quickly jump and continue walking.

As we walked, I could see that the two sides of the route towards the palace were surrounded by gods and immortals from all the realms, even the King of Hell was invited and sat on the right of the Heavenly Emperor.

The Heavenly Emperor grandly sat on his throne at the top. He wore a golden crown and robes, his aura was grave and his brows were lowered. But, when he saw Night and I holding hands, he gave a light satisfied smile.

The Moon God, who stood next to the Heavenly Emperor, lowered his eyes towards our hands that were interlocked like an unbreakable chain, then he looked at how we stood shoulder to shoulder, with barely any space in between. His expression was squashed like a bittergourd and his brows were so furrowed, it could easily kill one or two mosquitoes. I heard the Moon God speak secretly to me, "Little Mi Er, how can you forsake the old and transfer your affections to someone new? What will happen to my poor Nephew? You only hear your new lover laugh, but you can't hear your old lover cry!"

I replied to him concernedly as well in secret and said, "The Moon God, please do not be so agitated. Sit down and speak slowly, you will be tired if you stand."

The Moon God looked conflicted then replied secretly, "I am officiating the wedding. I cannot sit."

I simply could not see how the Moon God would have the aura to officiate the wedding......

The Heavenly Emperor's gaze sternly swept across the grand hall. He turned his head and asked the Moon God in a low voice, "Why don't I see Phoenix?"

The Moon God looked at me and responded, "This is an important ceremony in the Heavenly Realms... everyone is gathered here, Phoenix must be on his way but was slowed down by the crowd. There is no harm in waiting a while more."

The Heavenly Emperor lightly furrowed his brow as if he was not satisfied with the Moon God's explanation and so he said immediately, "We won't wait. Let's start."

The Moon God appeared to want to say something more but he was stopped by the Heavenly Emperor. He had no choice but to commence the wedding, "Music!" In a moment, the hall was filled with celebratory music and the surrounding gods looked at Night and I with praise, "What a beautiful couple!"

"The bride and groom bows to heaven and earth!"

"The bride and groom bows to their ancestors!"

As Night's mother had long passed on and there was only his father left, the Heavenly Emperor, the second bow was also towards the Heavenly Emperor. As I raised my body, I heard Night say, "Not only do I owe you a debt for bringing me up, you have also taught me like a teacher and bestowed onto me this matrimonial fate. The gratitude I feel cannot be expressed with only two bows. Today at my grand wedding, I specially honour you, Father Emperor, with this cup of clear water to express my heart to you."

The Heavenly Emperor received the jade green goblet that Night transformed and said with satisfaction, "How precious for Night to have such a heart." He then finished the drink in one gulp.

"The bride and groom bow towards each other!" After this bow, the ceremony would be complete. My heart was a litte nervous when I heard the Moon God stretched the sound of each word, as if reluctant to let it end... each word became longer than a sentence...

Just as the Moon God finally ended the last word, the palace door was opened with a bang as if pushed by a strong wind. All the gods looked back and I lifted up my red matrimonial veil. 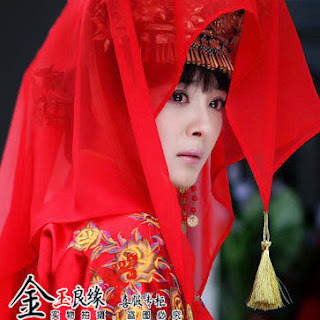 Phoenix stepped into the hall in silvery blue robes which deeply contrasted with the hall that was ablaze with the ceremonial colours of red.

"Phoenix!" The Heavenly Emperor voice deepened, "What are you doing?"

Phoenix threw the person he was holding onto with his hand into the centre of the hall. Everyone finally noticed that he had entered holding onto a person. Phoenix's long eyes sharply swept across, he lifted up a long sword in his hands and pointed to Night, "Father Emperor, I'm afraid you have asked the wrong person. You should ask Night instead about what he is doing!"

Night looked at the bound person in the centre of his hall. His expression did not change but his aura dimmed a little, "What does Phoenix mean?"

Phoenix glanced at him from the side of his eyes but did not speak. He commanded the person kneeling down on the floor, "I trouble Immortal Tai Si to lift up his head."

When the gods heard the person's name, all of them were shocked. The person lifted up his head, although he appeared disheveled and slightly injured, everyone could recognise that this was the Heavenly General Tai Si who held onto great military power.

"On Night's big wedding day, he did not forget to command his soldiers. While everyone gathered to welcome the bride, he ordered Heavenly General Tai Si to go steal the Heavenly Emperor's seal! What a good tactic - using the ceremony to hide your true purpose!" With that, everyone was jolted like a bolt of lightning. All the gods in the palace turned towards Night with suspicion.

All the gods knew that the heavenly soldiers and heavenly generals were split into eight factions, five under Phoenix's control and three under Night's. Heavenly General Tai Si has always loyally followed Night. It was clear who was behind him.

"In front of the palace, you welcome the bride, behind the palace, you are arranging your army. There are hundred thousands of heavenly soldiers and generals waiting to ambush the Heavenly Emperor's Nine Mist Clouds Palace." With every word from Phoenix, the hearts of the people jumped in terror, "Once the ceremony is complete and the drum is hit, the soldiers will come in and capture the Heavenly Emperor, am I right, Night?"

Finally, Night's expression darkened and he closed his lips.

With a flick of Phoenix's finger, an unstoppably quick flash of light hit the big drum. Before the sound could even land, a whole troop of soldiers swarmed into the palace hall. The troop seeing the person tied up in the middle of the hall, immediately realised that the situation was upside down, and froze helplessly.

"Guards! Take down Night!" Phoenix commanded and two of his men stormed into the palace and captured Night. They each took one of his arms and pulled it to his back and pressed it upon his shoulders.

Phoenix took a few steps and guarded me behind his back.

"Night, what do you have to say?" The Heavenly Emperor's brows were tightly furrowed as he looked at Night, his eyes full of shock and disappointment.

Night in his robes of red and jade crown, although he was restrained, not a strand of his hair was out of place. He lightly smiled as he looked straight at Phoenix, "Nothing. Whoever wins will be Emperor, except I was lacking, the mantis is stalking the cicada but does not know that the yellow sparrow is behind it*." 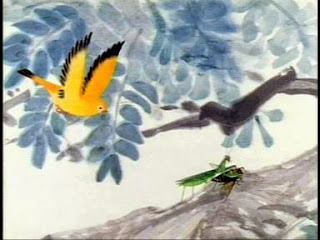 *A chinese saying in which the person only looks at what it can gain in front of him and does not notice the problems behind.

Comment: If you remember Night once told Jin Mi about his childhood in Chapter 16, how his mother was an ordinary red koi and all he wanted to be was an ordinary red koi. He tried his best to hide his dragon self (dragon is representative of the Emperor) and would always wear fiery red clothes when he transformed into his human self... of course later, Night no longer wore red, which became Phoenix's colour, and he was always his quiet elegant self. I think one could see that he was repressing his "red" self, and on his wedding day, in the grand red matrimonial robes, Night is finally showing his true colours.

Lots of little touches and hints in the chapter of what is to come. It's time for everyone to wake up.
Posted by Decembi at 15:52