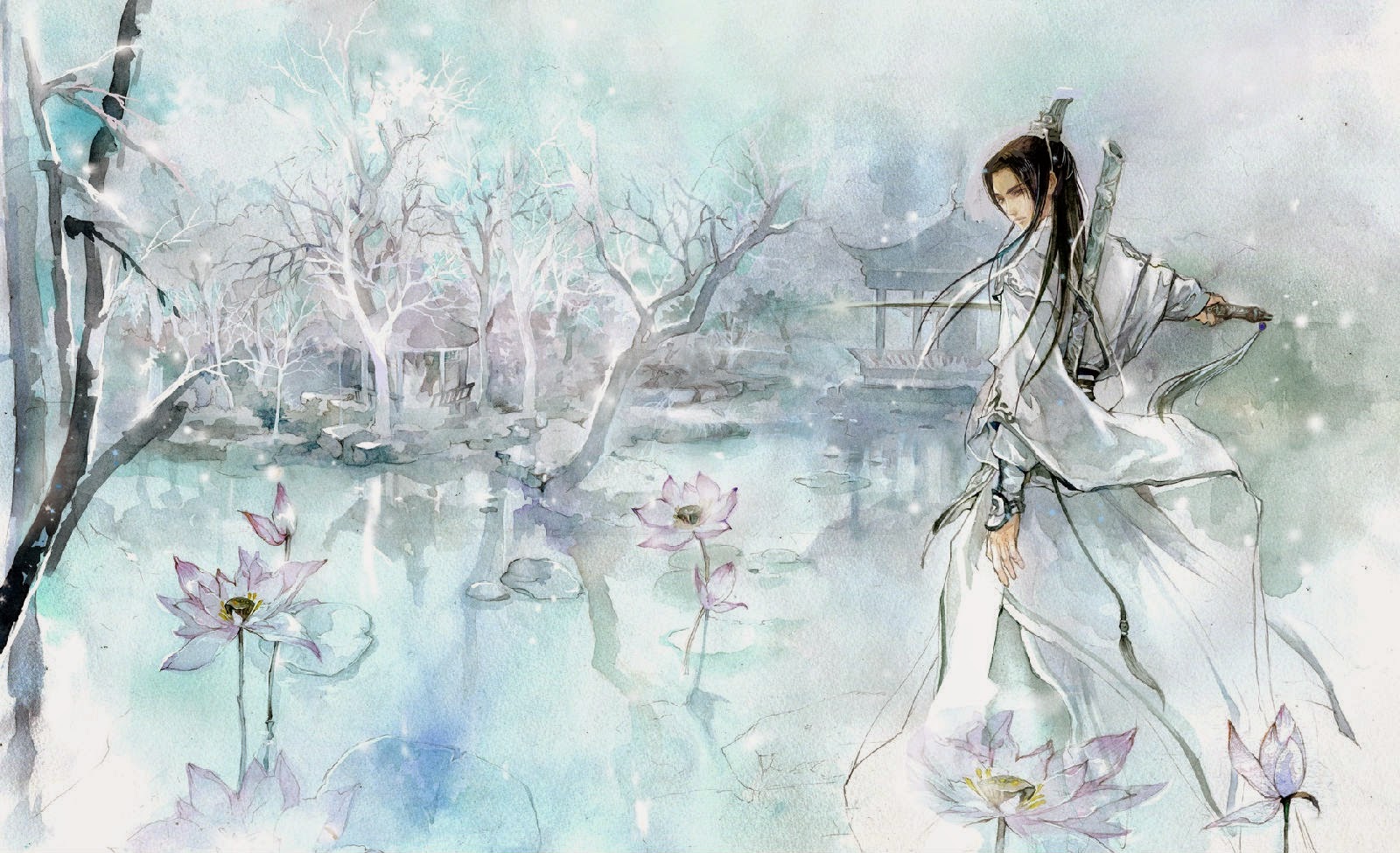 Can you guess who is the male in the picture above? This is the start of the final arc. Let's go!

But, only silence met her cries.

Instead of feeling increasingly sad as her sobs grew more uncontrollable, Wang Huan felt a sense of indignation well up inside of her. She coughed and slapped her palm on the ground, "Yan Zun, the first time I cried for a boy, it was for you. Are you always going to make me cry for you?"

She saw the leaves that had fallen on the ground started to be rustled by a rising wind and a smile crept onto her lips. She watched as the winds circled all the trees and the spider webs disappeared.

She had not seen him for almost a hundred years, but she recognised him immediately. His robe of white, his long dark hair, his delicately carved face, as if he was a handsome figure made of glass.

His gentle eyes crinkled upwards as if to signal he couldn't do anything about her. Wang Huan felt her sobs stop as her breathing stabilised. She smiled.

He sighed, but she could see that his eyes were happy.

"I have appeared, why are you still crying?" He asked softly, as he went up to her to lift her from the ground.

Wang Huan touched the tips of her eyes and realised that tears were still slowly falling from her eyes. But, these were not tears of sadness.

She smiled. "Yan Zun," she called again, as if she could not believe this foreign sound coming out of her lips.

She placed her hand in his. She felt her heart rise as he lifted her up, "You are back."

"Indeed, he is not," Wang Huan heard a familiar voice echo from the entrance of the courtyard. She turned her head and glared at An Hun. An Hun had been busy with Prince Sun and refused to tell her about their plans......

An Hun gave his younger sister his usual cavalier smile, "Wang Huan, now that Yan Zun is back, you aren't happy to see your big brother anymore?"

"I have to go," Yan Zun nodded his head lightly to Wang Huan and walked towards An Hun. He turned his head back slightly before exiting, "I'm glad you are well, Wang Huan."

An Hun watched as Yan Zun exited the courtyard. He hid a smile, he had warned Xi Yang that bringing Yan Zun back would complicate his own relationship with Wang Huan... but Xi Yang insisted that Yan Zun was necessary. In some ways, he was necessary to both Xi Yang's plans to take revenge on the person who poisoned Wang Huan and also to his own plans to ascend the throne in the Dark Realms --- the return of the long exiled leader of the Spider Demon Tribe would also herald a new power imbalance in the insect demon tribes in the Dark Realm. An Hun could already sense the fresh blood that would be shed.

He had to admit - he was excited.


Lightly, very lightly, Xi Yang descended in the garden of Yue's palace. In her wait for Xi Yang, Yue had already dozed off on the stone table. Xi Yang watched as the moonlight fell on Yue's sleeping face, he did not know whether to laugh or cry --- already a wife, a mother, an Empress, but still as usual, the sleepy moon maiden.

He sat down on the stone table and tapped Yue's forehead lightly. She easily stirred awake and smiled at the sight of Xi Yang. Her eyes widened in concern when she saw how dusty Xi Yang's robes were - in all her years with Xi Yang, she had never seen him untidy.

Xi Yang warmed the pot of tea on the stone table and poured tea for both of them. He said, "I had to travel to a far away place to settle important affairs. I had no time to clean up before I arrived."

Yue smiled as she pointed at the carefully packed bundle on the table, "You rushed so much just for a package of red hot spicy pork? That doesn't sound like you, Xi Yang Ge Ge (older brother)."

"Perhaps so," Xi Yang nodded as he stared at the moon, "How did you know you loved Hsiao?"

This was the first time Xi Yang had asked Yue about the matters of the heart. Yue's eyes widened and she straightened her back. She cleared her throat and said seriously, "I don't know."

Xi Yang frowned at Yue, and she nodded sincerely back at him, "I really don't know."

"When Hsiao was stabbed by a sword in order to save me, when I saw him bleeding, I knew I could not lose him. But, if you asked me if I knew then that I loved him --- maybe? But maybe not? Somehow, I think I had long loved him before... and it was only my heart wishing strongly that it wasn't too late."

"Sometimes I think maybe I loved him the first moment when I saw him and he was fishing with a straight hook in a remote forest. Or, maybe it was when he delivered a baby in the middle of the woods. Or, when he shot that arrow straight into a bull's eyes! But, then I will think that all these answers aren't really accurate, because I don't love Hsiao because of something. I just love him."

"Yes," Yue smiled, her eyes thoughtful as a smile played on her lips, "I just love him."

Before whenever Xi Yang saw Yue with the look of a woman deeply in love, his heart would twinge. But not this time. This time, he was happy. Happy for her.

He nodded appreciatively, "You are lucky, Yue."

"You always talked about a red thread, a matrimonial fate," Xi Yang said, he placed one hand on his heart, "And, I would think, is there really such a thing here?"

"But, I think I have met that person who tugs my heart - that person that no matter where I go, I will place myself where I am in relation to where she is. I don't know if she is my starting point, but perhaps, she is my ending point, my always destination."

Both of them said nothing as they exchanged a deep look of understanding.


Wang Huan had decided that she was tired of waiting. All the men in her life had told her to stay in the courtyard, to recuperate, to rest, to be safe. But, she was tired of being treated like a doll - she had her own mind and she was determined to find answers.

But, just as she made the decision to go find An Hun and find out where was Xi Yang, Xiao Mi had dashed into her room with a packaged bundle.

"Princess! I found this bundle in the kitchen with a note to heat it up for you. It smells like something from the mortal realms..." before Xiao Mi could finish her words, Wang Huan quickly opened the bundle and recognised the imperial red hot spicy pork dish!

"Xi Yang!" Wang Huan shouted and she dashed out her room. But, there was no sign of external entry. She turned her head to Xiao Mi, "Did you see Prince Sun?"

Xiao Mi shook her head though she added uncertainly, "Though, some of my spy bees did see a figure leaving in the direction of..."

"In the direction of?" Wang Huan asked.

"In the direction of the third princess, Lan Ye (蓝叶 - meaning blue leaf)."