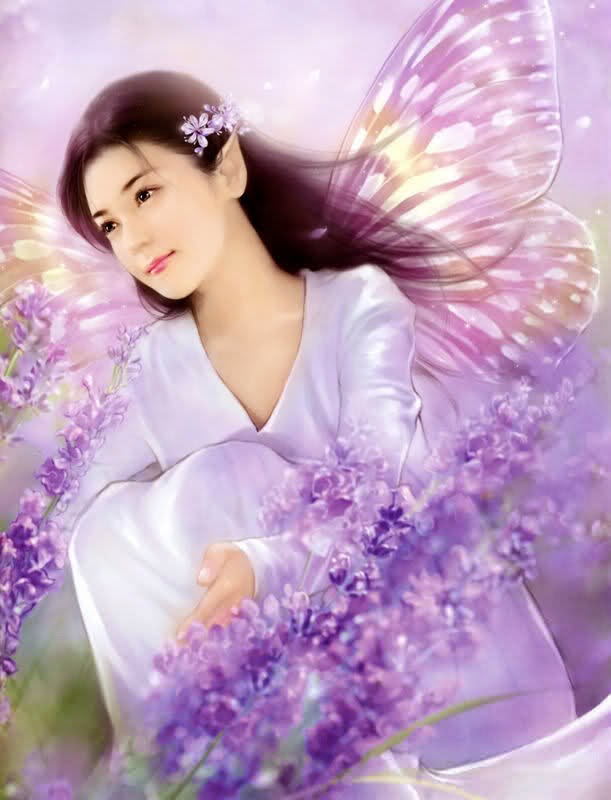 Both Night and Phoenix appear in this chapter, both perfectly showcasing their best traits --- one is the Lover and the other is the Companion. Can you tell who is which?

Chapter 19: The Emotional Threads are Deep and Mysterious (Part 1 of 4)

Nothing is more beautiful than an April's day. When it's April in the mortal realms, the cherry blossoms are in bloom, the sweet floral fragrance permeates the air, the mortals think that this is the epitome of beauty. But, such a sight is ordinary in the Flower World. Every day is an April's day, every season is spring. One doesn't remember when a flower blooms for it never withers.

The warm wind made one drowsy, filled one with a sense of laziness. During the first few days when I first returned to the Flower World, I could hardly rise awake... whenever the Twenty Four Flower Leaders visited, I would be sleeping. This evening when I was playing chess with Night, I could barely last until half a set when I leaned down on the stone table and started to dream. Half dreaming and half awake, I thought I heard the Head Flower Leader talked to Night.

"This child, Jin Mi... ah, her life is tough. Do I dare ask if Night is sincere towards her - without any ill intent?"

"This is my real heart, the Head Flower Leader does not need to suspect."

"But if one gives real feelings, then one will wish that one's feelings are also reciprocated with real feelings. Jin Mi is like barren ground, no matter what fertiliser you give, no matter how carefully you water and protect it, you would not be able to grow a single petal. To speak of love with her is to throw a stone in the big ocean, you would not receive an echo back. Is Night afraid of wasting time and effort?"

"Ah... what is there to fear? If time is meant to be spent, I am willing to waste my life with her... but, for what reason does the Head Flower Leader speak so pessimistically about Jin Mi?"

"(cough).... Jin Mi grew up under my watch, her basic nature is kind, only she has always been cold and ruthless with her feelings. Besides wanting to become god, she has no other desires, no person, no thing comes into her eyes - not to even mention her heart. When the Water God passed on, did Night see Jin Mi shed a single tear?"

"Now that you mention it, she did not. But, a great love leaves no traces, a huge sorrow has no tears. How will the Head Flower Leader know if Jin Mi is not actually grieving in her heart? Please don't speak badly of Jin Er, if I may be so blunt, I do not like to listen of such words."

"Ah... then I will stop here, one's nature is not easily changed, I can only hope that the efforts Night put in can crack metal and stone."

Night stroke my loose hairs on my back, I comfortably laid down on his arm and fell into a deep sleep.

I did not know how much time had passed but I suddenly realised that I was no longer sleeping on an arm but a silk pillow. Night must have left and I could only blearily hear the Head Flower Leader sigh, "I do not know if the Unfeeling Pill is a blessing or burden to you..."

When I awoke again, the sky has lit and so the night had passed without any trace.

Next to the previous Flower God's tomb was a stone pavilion  In the day, I would read the books that the Moon God had passed to me. The books talked about emotions and entanglements, I did not understand what was written, but I was forcing myself to read it from start to end to figure out its secret. 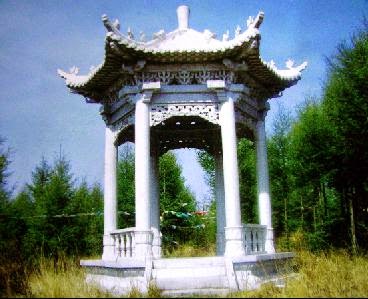 I had woken up late today and felt bored of reading, so I started to copy out a few lines of poetry on loose paper when a gush of wind suddenly blew and the papers with ink on them started to fly out of the pavilion.

I looked at the flying papers with interest, and decided to put down my calligraphy brush. I started to fold the other poems into butterflies and using my magic I made them fly one by one outside of the pavilion with their wings. The white clean butterflies with ink brush words on them flew up and down in the sunlight, it was a lovely sight, even more beautiful than real butterflies.

Suddenly, I heard an almost indistinguishable sound of breathing in the pavilion and my gaze returned. I saw Phoenix leaning elegantly on one of the pavilion pillars. His gaze was concentrated on his hand which was squeezing a few of the paper butterflies. Sensing my gaze, he lifted up his head, "This is not bad."

"Yes," I nodded my head, "Indeed, it is not bad, it is pure like jade, shining but not slippery... if Phoenix likes this paper, I can give it to you."

Phoenix lifted a brow and flipped the paper, he said, "I was saying the poem is not bad." He picked one paper up and started to read, "*Never-ending lines of poetry, everlasting longing, I ask the gentleman if I can depend on you... even with feelings, one needs fate, an ice heart hides......"
Phoenix raised the ends of his brow, "You speak so bluntly, one wonders which god you are longing for?"

I opened my mouth and was about to respond when I suddenly changed my mind, "I must not be blunt enough if Phoenix cannot tell who I am longing for."

Phoenix clenched his finger and the paper was folded into a deep crease, "What do you mean?"

I looked out of the pavilion and slowly took in a breath, "It is not only the handkerchief that has silk** (but the chinese word 丝 here plays on the dual meaning of connecting feelings like a thread), if you leave the paper up to the light to see, it will also appear like silk. It's just a pity that you did not want it when it was given to you."

Phoenix's expression did not change as he watched me, his eyes were calm but his fingertips lightly moved, they had gotten smudged with the black ink but he did not realise it. The wind cut through threads (the same chinese word here as  丝 silk) of chaotic breathing. After a while, he finally opened his mouth, and said each word seriously, "What did you say?"

I examined his inscrutable expression and suddenly remembered something. I raised it casually, "Can you not marry Princess Sui He?"

With this, Phoenix's face finally had some movement. He looked at me startled, the flame in his eyes appeared to have met a flicker of wind, "Ah? Why?"

The ends of Phoenix's mouth lightly lifted up as if he did not know whether to cry or laugh, "I must thank you for thinking for me, but..." His eyes looked straight into mine as if he was determined to look into my heart, "But what if I tell you that only applies to mortals and does not apply to gods, will you be willing for me to marry Sui He?"

He looked at me, this invincible arrogant Fire God, at this moment he had a sense of vulnerability between his brows, as if he was betting his life and death in this moment.

I thought for a moment and replied, "Not willing."

A long sigh was released. Phoenix comfortably closed his eyes and when he opened his eyes agan, I saw a dimple faintly appear at his cheek, "Why?"

"If I don't marry Sui He, can I marry Yue Bei Xing from the Nine Shining Stars Palace?" Phoenix had a lot of questions today.

I paused for a moment then answered seriously, "It doesn't seem right as well."

Phoenix's dimple deepened, "Then how about Princess Liu Ying?"

With that, Phoenix continued asking about half of the beautiful gods and sprites in the six realms. Since I was being so thoughtful to think for him, I helped him to reject them all. Phoenix's smile widened and he was positively radiant.

Finally, he sat next to me, his hand lifted up the loose strands of hair from my forehead and placed it behind my ear. His eyes were brimming with gentleness, "Don't worry, no matter how good these goddesses are, they cannot enter my heart. In this wide world, only one person lives in my heart. In my life, I will only marry that one person." With that, he placed me in his deep embrace.

I leaned on his chest, and seemed to hear the sound of the river rising and falling. I closed my eyes and obediently neatened his fallen hairs then hugged him.

His lips grazed the top of my head, he did not speak, as if he was enjoying an inexpressible moment.

As Phoenix was leaving, he hesitated for a moment, his cheeks turned red and he asked, "Will it still count if you give me these pieces of paper now?"

I passed him some of the papers and generously said, "Of course it counts. You may take, if it's not enough, you can take again."

Although Phoenix was dressed in simple robes, with the papers in his hand, the smile in his gaze, his whole demeanour was extraordinary.

*Basically, Jin Mi was copying lines of romantic poetry. They exchanged quite a bit on the lines of poetry but it's too complicated to really fully articulate here, so I have given a very simplistic translation.

** This whole chapter is so beautiful. I must comment that the title of the chapter also has the play on the word silk (丝) which can also mean emotional threads. In this chapter, although Night gets to appear, it is clearly Phoenix's chapter all the way. When Phoenix first appears and reads the love poems written by Jin Mi, he was jealous and wondering who she was thinking about (answer: no one). But, who would have expected Jin Mi to tease Phoenix for looking down on her pieces of papers - a silk handkerchief from a maiden is the usual love token, but here she suggests that these pieces of paper can also be a love token that connects feelings, after all, these thin gossamer-like papers are translucent like silk in the sunlight.

I love what Jin Mi said, though from the context, I think she genuinely was just playing with the "silk"-like texture of the paper and thought the butterflies were so beautiful... instead of indirectly giving a love confession to Phoenix, which was what Phoenix took it to be. Haha.

Ah, but Phoenix's dimples... who can resist?

The chapter is only going to go into deeper, unescapable territory......