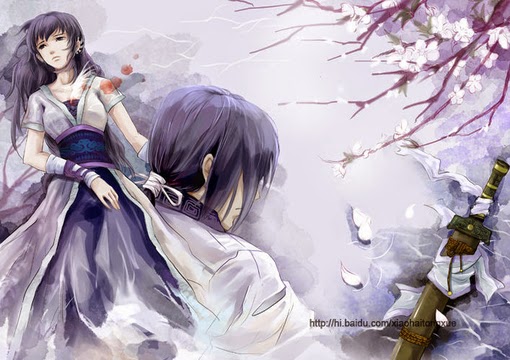 In the final part of chapter 18, we find out why Jin Mi did not marry Night on the fated day...... as Jin Mi slowly learns, sometimes getting what you thought you wanted does not actually make you happy.

The third day of the third month is when Spring returns to the land. As all the creatures awoke from their winter slumber, what they look forward to the most was the wet spring rain. But, all of them were destined to be disappointed this year.

With the passing of the Water God, where will the rain come from?

"The Heavenly Emperor has given an edict!" A proud immortal attendant announced himself in a hall full of gods crying their lungs and hearts out, "Jin Mi Immortal to receive the edict!"

I gave out an affirming sound and knelt down to receive the imperial command.

"The Water God's passing has caused the whole world to cry. The Water God had always loved all creatures in the realms and used his divine energy to help many living things. He will be given the title of Benevolent Holy God. Jin Mi is the Water God's only child and will have to fulfill her filial duties and guard his tomb for three years. Her wedding with Night will be delayed for three years. Finally, Jin Mi will be treated as a god from henceforth and inherit the title of the Water God!"

"Jin Mi receives the edict!" I received the holy edict.... although I had finally fulfilled my dream of becoming a god, but my heart felt strangely empty.

In one night, I gained a Water God Daddy.

In one night, Water God Daddy's soul disappeared from existence.

It was like the thin spring rain in April, before you could even touch it, it would disappear in the glow of spring, it caused one to doubt if what you saw was real.

Once again, I returned to being an orphan.

I held the willow ice blade in my palm, the wintry coolness seeped into my bones, the hall was filled with sesame yellow and plain white, the colours of mourning. Facing the many gods who had came to mourn for my father, I was in a daze and said numbly, "If Daddy did not use half of his divine energy to make this willow ice blade to protect my body, will his soul not disappear when he was struck by a poisonous blow? If I only knew earlier... if I only knew earlier..."

Night held me in his arms and lightly stroke my back, it was exactly like how my Dad used to comfort me, "Even a thousand gold taels cannot buy foresight. Jin Mi shouldn't be upset, I am still here, the Water God will also not want Jin Mi to break her heart over him."

I looked at him dazedly, "break my heart?" What is heartbreak? My chest only felt a little heavy, as if a big rock had hit my chest. I think my body is only a bit tired... and I will feel better after a rest.

At the side, the Wind Goddess was in the mourning clothes of hemp, her gaze was calm as she lit three incense sticks and kowtow three times. She then silently sat at the side to receive the condolences of the various gods.

Although the Wind Goddess was Daddy's matrimonial partner, I actually hardly saw her. She did not stay at Luo Xiang manor and although she was married to Daddy, in truth, they were actually forced to be married by the Heavenly Emperor and were only partners in name. Both of their personalities were cold and distant and they hardly met except for important events in the Heavenly Realms. If I did not see her today, I would have almost forgotten her existence.

The young immortal child at the door was announcing the gods that had entered to give their condolences when he paused... it was not clear who he saw, but he increased the pitch of his voice and cried, "His Fire God Highness has come to pay his respects!"

I turned back and my eyes hit Phoenix's gaze which did not have its usual arrogance. Phoenix was in a full robe of white, his hair tied up, no adornments or accessories on him, he took the incense sticks and walked to the centre, finally stopping before Daddy's clothes and bowing down to give his respect. His expression was solemn and sincere. I saw his thin long fingers holding the three incense sticks... I knew that in the middle of his right hand was a callus* from where he held his writing brush, and another callus from how he held the sword... Night lightly kneaded my palm, and I felt my body stir slightly and my mind regained awareness.

Night brushed my forehead and I was about to turn my head back when I felt a gush of wind, Phoenix was now in front of me, he lowered his head and looked into my eyes with a rare warmth, and spoke to me in a voice that only came a hundred years, "Please let go of your sadness and find peace. His Great God loved the Flower Goddess his whole life. Although they could not be together in life, they must have wished to be together in death. To place the Water God's clothes next to the Flower Goddess' tomb, so that they could be together, shoulder by shoulder, overlooking the Water Boundary where they first met, what do you think? I asked the Wind Goddess for her opinion and she said she had no objections."

I obediently nodded my head.

Night lightly patted the back of my hand. Phoenix looked at Night's hand, his expression flickered between light and darkness, his brows tightened, the ends of his eyes stretched.

"I will definitely help you find who killed the Water God."

"I will definitely help Jin Mi find who killed the Water God."

Phoenix and Night both spoke at the same time. They were truly brothers in harmony.

I smoothly nodded my head then quickly shook my head, "No need no need. What good is revenge?"

"You!.... Ah..." Phoenix gave out a long sigh, he stretched out his hand as if he wanted to pat my head but his hand retreated half way. The spring sun landed in his palm.

There was a gush of wind and the white ceremonial papers that did not have any weight to press them down started to fly and scatter.

"Has Phoenix's body recovered?" I quietly looked at Phoenix.

His eyes shone as if his mood became good again, "Much better. I had fully recovered a few days ago."

I gave a light affirming sound. Phoenix was truly the strongest Fire God ever, within a month he had fully recovered from such a serious injury.

Seeing that I remained silent, Phoenix added, "I found a shoe outside my palace," He paused then continued, "It was not an immortal pill, but it was even more effective**."

I fell into my own thoughts and did not delve into the fact that the first half of his words did not match the second half. Night lowered his brows, his expression cooled.

After the seven days of the funeral, I returned to the Flower World and buried my father's clothes. Before I left, I visited the Temple of Matrimonial Bliss to take away the spring paintings and love books the Moon God had given me earlier. I would have nothing to do while I guarded the tomb for three years, I might as well carefully study what he had given me to pass the days.

It was a little boring to guard two bald tombstones. Whenever I was bored, I would plant some flowers and trees. Lately, my favourite was the camphor tree because it had thick dense leaves that were luxuriant and bloomed in all four seasons. When the wind blew through it, it would make a light "sha sha" sound and lightly shed green and red leaves, creating a beautiful sight. I liked to carry an umbrella*** and walk through the falling leaves. Hearing the leaves fall on the umbrella sounded like the falling rain, resembling the rain formation that Daddy would create. 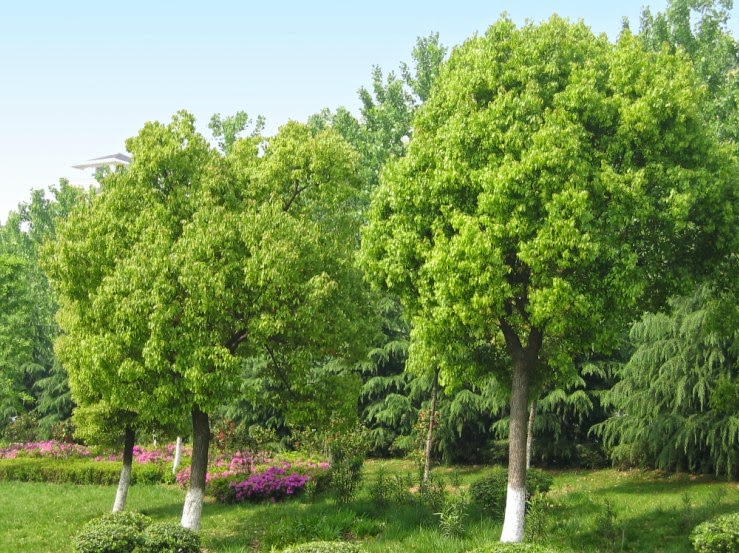 I studied some destiny life formations from a book from the mortal realms. I realised that my destiny was too hard, I was born to harm people--- harm my dad, harm my mother, harm my husband, harm my child... in all, I would harm everyone around me.

Sigh! I was truly dangerous!

*Also known as a corn.
**Phoenix found Jin Mi's shoe and knew she visited him while she was injured hence his cryptic confession in front of Night - your shoe was more effective than any medicine.
*** In case anyone is wondering, the writer was referring to the olden time oiled paper umbrellas: 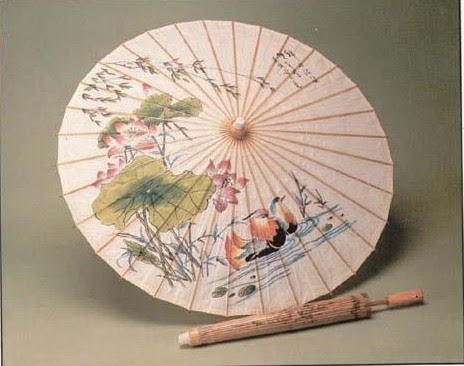 Now, who hurt him? Will Night or Phoenix find out first?

Jin Mi learns that becoming a god does not actually answer her problems. In fact, she is still running away from her heart.

We are heading towards the next climax! May the best god win!
Posted by Decembi at 02:24