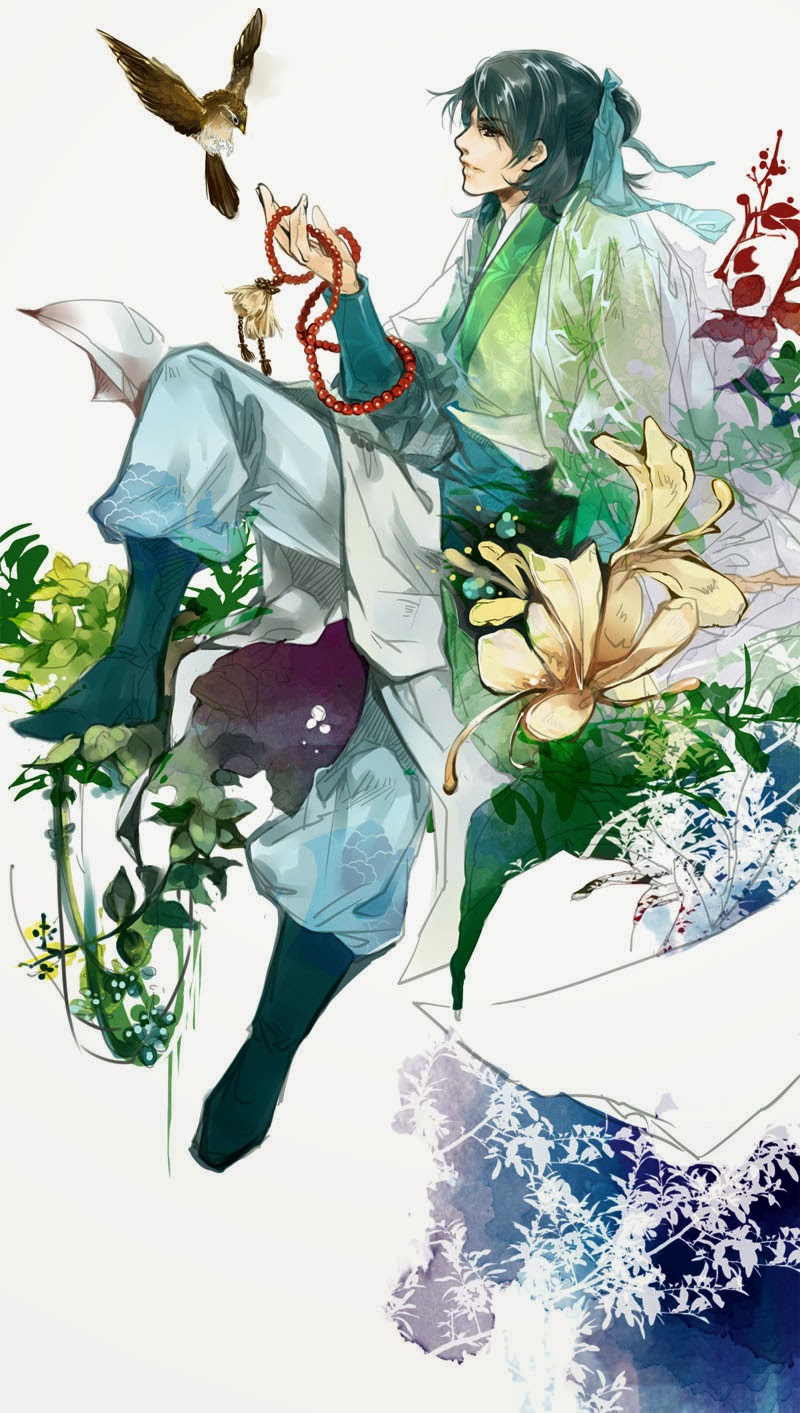 I changed the original title of Chapter 18 and will only reveal it at the end of Chapter 18 because the title itself is a huge spoiler and I think most readers will enjoy the story much more without knowing the title beforehand. A favourite character of mine appears and he spills a rather big secret, but who knows if Jin Mi will get it?

We are now at chapter 52 of 68 internet chapters and chapter 18 of 24 book chapters.


"How many female goddesses has Night had physical relations?" I sat on the bamboo bed, bit my lips, and seriously looked at the half kneeling Night before me.

Night's hand paused, his cheeks flushed red, he turned aside to cough, then returned a gentle gaze at me, "To have physical relations is not child's play. Since I have a marriage agreement with Jin Mi, why would I have any physical relationships with other female goddesses? I only anticipate marrying Jin Mi on the 8th of the next month, we will then be husband and wife for ten thousands of years."

I paused, from what Night had said, only men and women who are going to get married should mutually cultivate? But, Master Pu Chi said that as long as one is a man and one is a woman, then one can mutually cultivate, and the Moon God said that mutual cultivation harmonises the yin and yang. Since both of them had such different views, I could not help being a little confused.

Night carefully looked at me and said calmly, "Why does Jin Mi ask this? Has Night done anything wrong?"

Phoenix and Sui He did not have any marriage engagement, I suddenly remembered the scene I had seen in Qi Wu's palace, I furrowed my brow and looked into Night's clear gaze, "You are very good, even better than very good. I had came to accompany you to watch the moonlight, and had only asked the question for fun."

Night gave an elegant and gentle smile. He got up and sat next to me. He held my back and bent down to kiss me, it was soft and smooth like maple syrup dissolving on my lips, after a long while, he finally moved away. His forehead leaned on my forehead, the tip of his nose brushed the tip of my nose, he gave out a sigh with deep feeling, and then placed his hand on my shoulder and sat next to me. He lifted up his head to face the moon in the sky, he smiled, "The moon looks less lonely tonight."

The night was cold like water, the small fireflies flew around us, my eye lids started to grow heavier and I yawned, I leaned onto Night's arm and safely fell asleep...

When the dawn broke and Night's shift was over, I had awoke and Night sent me back to Luo Xiang manor. Just as I stepped into the manor, I saw a group of immortal attendants looking helpless as they surrounded a figure in green who cried, "Ah Jin Mi! Ah Jin Mi! I have waited for days and nights just to see you. But, who knew I could only see your dead body? No one can stop me! I will chase Jin Mi in death!" As he cried, he appeared to want to hit the pillar with his head and his voice rose passionately.

I saw that this was Master Pu Chi.

"Who said Jin Mi is dead?" Water God Daddy sternly said as he stepped into the hallway and looked at Master Pu Chi, his brows were furrowed tight as if his head was in great pain.

"If she is not dead, why doesn't the great god let me see her?" Master Pu Chi hugged the pillar and refused to let go, but his tears immediately stopped.

"Jin Mi is already betrothed to Night. I hope Gentleman Yan You can speak carefully and not harm Jin Mi's reputation," Daddy coldly spoke, he sounded a bit angry.

"The great Water God's words are too cold. Although Jin Mi has the right to be engaged, I also have the right to have unrequited love," Master Pu Chi said boldly.

"If so, Gentleman Yan You can go off alone to experience your unrequited love," Daddy threw aside a robe sleeve and ordered, "Send the guest out."

"I don't care, I don't care! I want to see Jin Er!" Master Pu Chi hugged the pillar tightly as if to show that he planned on staying. The attendants at the side did not dare to go nearer and could not do anything to him.

"Gentleman Yan You is no longer a child, to come here for ten continuous days, don't you find it embarrassing?" Ah, Master Pu Chi has come for so many days, but I never knew.

"My heart is sincere and true, what is so embarrassing about it?"

Since Daddy was kindhearted and not cruel like Phoenix, he would not easily use his powers to handle Master Pu Chi. I saw Daddy press his throbbing forehead and exit from the hall, instructing the attendants to keep the door closed and to leave Master Pu Chi.

The attendants in the hall must be used to Master Pu Chi, they immediately exited afterwards. When I pushed the door and entered, Master Pu Chi's eyes immediately shone and he quickly let go of the pillar and rushed towards me. He happily pinched my cheeks and cried, "Ah! Soft! Warm! You are truly still alive!"

I waved away his hand, "What does Master Pu Chi find me for?"

"Beauty, when I heard you had gotten into trouble, I was so worried that I could not eat or sleep. Even at the risk of angering the Water God, I had to personally come here to see you. Look at me, I have shrunk until I am skin and bones!" Master Pu Chi pulled up his sleeves to show me his arm.

I very cooperatively poked at his fleshy arm and thought, "It's good to be slim."

Master Pu Chi blinked and said aggrieved, "You are patronising me..." He suddenly said, "Jin Er, can you not marry Night?"

"Why? If I don't marry Night, who should marry Night? Unless, Master Pu Chi has given his heart to Night?"

Master Pu Chi's brow rose, "How can that be possible! Even if it is so, it would be Night that gives his heart to me! Look at how handsome and distinguished I am, even my one fingertip is so full of charisma that people can not help falling for me, I am the man who all the women dream after!"

I quietly endured this and pretended that I did not hear it.

Suddenly, Master Pu Chi's face turned seriously and he grabbed my hand, "Beauty, listen to me, you must not marry Night!"

I could not help being curious, "Why not?"

Master Pu Chi lowered his voice, "I looked at the stars in the sky a few days ago... the constellations have a strange glow, it seems like there is going to be a great change in position. Heavens' secrets cannot be revealed, but I reveal this to you alone... the stars reveal that .... reveal that you can only marry me!"

A first I was carefully listening to Master Pu Chi, but when he said the last laughable line, my face darkened and I gave a dry laugh, "What a mystical star sign."

"Isn't it mystical!" Master Pu Chi proudly stroke his chin and gave a radiant smile, "Recently, I started to learn the art of divination from a half immortal in the mortal realms! It's very accurate. Do you want to learn?"

"There is no need. I have only just recovered from a serious injury and am not suitable to learn divinity. You can slowly study it," I gently rejected Master Pu Chi. I saw that Daddy was coming from afar to bring my medicine to me, so I also pushed away Master Pu Chi's hand. I felt that my palm was a little sticky and thought of how Master Pu Chi had teared from his eyes and nose earlier, I wasn't sure if I had touched anything dirty so I quickly wiped my hand on his sleeve and said, "I am going to drink my medicine so I cannot send Master Pu Chi out."

"Ah, truly a heartless beauty," Master Pu Chi sighed then gave a laugh, "But, I like it! Ha Ha!"

As I walked to Daddy, I heard Master Pu Chi's last murmur before he left, "Night is not a simple person..."

Daddy watched Master Pu Chi leaving from afar and furrowed his brow, he asked, "How did Jin Er meet this shameless person?"

"He had came the first time I used the incantation to call spirits."

Daddy gave a slight nod, "Gentleman Yan You used to be one of the twelve zodiac gods*, his real self is a water snake. Because, he had broken one of the heavenly laws, he was sent to the lower realms and is under my supervision. He might have reacted to a water incantation."

I was shocked, I could not tell that Master Pu Chi used to be one of the top eminent and respected zodiac gods, "What heavenly law did Master Pu Chi break?"

Daddy was usually uninterested about these matters and simply said, "I am not clear, but this person's basic nature is not good, it must have something to do with his flirtatious nature. I advise Jin Er to avoid meeting him. Drink your medicine while it is warm," Daddy gently blew at the medicine then passed it to me.

I took the medicine from Daddy, pinched my nose and finished it in one gulp. Daddy smiled and with one hand called for a drop of dew that was residing on a flower petal, he transformed it into sugar and quickly placed this dew of sweetness into my mouth. Seeing my face relaxed comfortably, he gave out a compassionate smile, his eyes full of radiance.

I looked at Daddy's extraordinary aura, my heart warmed and I thought of two lines of poetry from the mortal world, "Can my tiny act of filial piety repay the overwhelming greatness of parental love?**"

But, I forgot that the mortals also had this saying, "A person cannot be judged by his looks, the ocean cannot be measured by a cup***." Although Master Pu Chi usually said a lot of nonsense, but he had guessed correctly this time, indeed, I did not marry Night on the eighth of the third month.

* The chinese calendar is split into twelve zodiac signs, so each day, month and year is represented by a zodiac animal (eg, rat, ox, tiger, rabbit, dragon, snake, horse, sheep, monkey, rooster, dog, pig). Although, most chinese only know the zodiac year, eg, 2014 is the year of the horse. This article gives some explanation behind the zodiac cycle.

** The original two lines, “谁言寸草心，报得三春晖。” The poem describes the love of a mother as being as great, warm and unconditional like the sun and spring.

*** A person cannot be measured by how he looks. A person's real character/ability cannot be ascertained from his present appearance.

Comments: A little more of Master Pu Chi's background is revealed. He is no ordinary snake but the snake of the zodiac! That explains his once esteemed position and his continued disregard of authority ...

So, why does Jin Mi not marry Night? :) It shall be revealed soon - but does everyone agree with me that Master Pu Chi's shamelessness does complement Jin Mi's own very well?
Posted by Decembi at 00:16