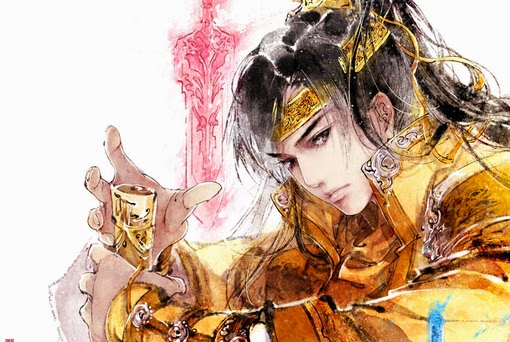 Slowly but surely, I am feeling much better. I shall be writing and translating more in the month of September! So, what awaits Xi Yang in Chapter 4?

P.S. I really recommend for readers to read Moonblossom's translation for Chapter 11 of Once Promised. It's so beautiful and elegant... there is no pain and heartbreak (yet) if anyone is worried about Once Promised - just passion and the fragile passing of time.

I was woken up by a sharp stab of pain.

When I opened my eyes, I realised that I was inside a dark cavern. Each of my hands was tied with a thick rope onto a separate boulder. There were several tiny stab wounds at my wrists and a sharp slash at my right wrist - I was bleeding profusely.

I uncomfortably lifted up my head in the direction of cold laughter and saw a young looking woman in shimmery, almost translucent purple robes. 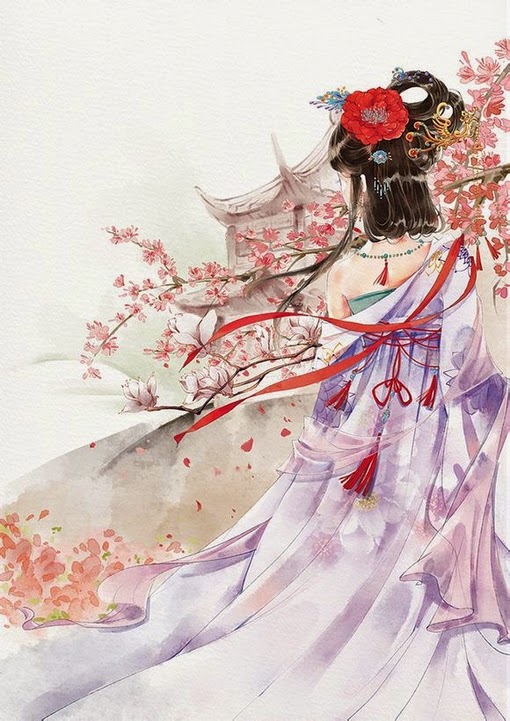 She was heavily made up and over perfumed, she could be considered beautiful, but her features were hard and cruel. She leaned down towards me and placed her hand on my face - I winced from the prickling of her long talon-like nails.

"You look so much like the Dark Lord that a part of me is hesitant to kill you,"She drawled as she pulled my face up towards her.

I gave her a questioning look, and she laughed. "You are so ignorant, little pretty one. You have no idea how many women your father have scorned and how many women want to kill you?"
She gripped my wrist tightly, "It was interesting to see that the rumours are true... you cannot be poisoned. I had jabbed you with my poison a while ago and there has been no effect on you at all, although the average immortal would have became completely immobile and turned purple in the face by now."

"It was hard to capture you," She laughed, "The Dark Lord placed a protective boundary over your small deserted courtyard that wards away demons of a certain strength and demons with intentions to harm you. It's a very strong spell and he must have invested a lot of his own divine essence in it."

My heart skipped in surprise - I never knew that there was a protective spell over the courtyard. I saw her sigh, her eyes filed with a mixture between jealousy.. and affection? Her face turned completely dark as she scowled, "I may not have been able to hurt you in the Dark Realms, but you are chicken feed here, little one. That bodyguard of yours... his powers are very strong... and I was wondering how I could immobilise you to carry you away since you are immune to poison... but the fates favoured me, he stepped away from a moment and I quickly carted the drunk you away."

She laughed heartily at that as she watched the blood slowly seep out of my wrist, "So many people have wanted to kill your mother and you - that dirty kitchen wench who stole the Dark Lord's heart. Funnily enough, your mother died of poison but you survived."

Even though my whole body felt weak, I spat at the woman, "Don't you dare insult my mother!" My heart twisted at the allegation that my mother died of poison... that was not what the Dark Lord had told me...

She gave me a tight slap on the face, "I show you a little kindness and you overestimate yourself!"

I started to laugh, "You call this a little kindness? You plan to eat me, don't you?"

A wide smile grew on her face, "They say your mother drank your blood to become more beautiful and gain the Dark Love's love."

I scoffed, "Foolish women! Nothing you could ever do to gain my father's love."

She ignored me and looked at the blood that seeped out, "Red clean blood. Your blood should not be poisonous." She smiled, "I am going to suck you dry now, Princess."

"I can neutralise any poison in my blood," I declared, "But, my blood is the most poisonous of all. If you don't believe me, test my blood first on any creature... it would be dead in the time to drink a pot of tea."

She arched her brows as if trying to discern if I was lying or not. But, finally, she turned around as if to find something to test my blood with.

In that moment, I started to survey the cave. My wrists were tightly bound and it was impossible to move. Should I really let this woman enjoy the privilege of killing me or should I do so myself first?

She suddenly turned back laughing, "How silly of me. Didn't I get my baby scorpions to bite you earlier? They are still fine... so your blood must not be poisonous."

With that, one of her hands became a long black pincer and she thrusted it directly at my throat.

I closed my eyes but I felt no pain. Have I actually ascended onto the next level?

Then, I heard a dark masculine laughter. I knew that laughter. I heard a female scream in agony - that scream did not belong to me. I opened my eyes and saw that Ri had caught the woman's pincer and crushed it.

The broken pincer laid on the floor.

"How dare you..." screamed the woman, as she slowly transformed into her real form, the Scorpion Demoness.

"I have only one thing to say to you," Ri said simply while dusting off black bits from his palm, "Do not ever touch my prey."

Just as the Scorpion Demoness swiped her huge black tail at Ri, an enormous fireball of energy formed in Ri's palm and he threw it at her.

I watched in mild horror as she started to burn up in flames and was quickly incinerated into ash... a fire that could burn such a powerful demoness... what kind of power did Ri possess?

Ri patted my head and I looked at him in surprise. He smiled, "Shocked into muteness already?"

Ri started to untie my wrists, "Turns out the medicinal pig is also a pig that many demons want to eat."

This Ri has no sensitivity chip!  After both my wrists were released, Ri looked at me, "Can you stand up?"

"No, I think the blood in my legs are stiff for now," I said honestly as I felt the painful tingling sensation when you try to move your limbs that have been immobilised for a while.

Without another word, Ri carried me up in his arms. I cried in surprise, "Err..."

"What? Do you plan to stay in this cave until your limbs can move?" Ri arched his brows as he looked at the incinerated pile of dark ash next to us.

I shook my head and Ri carried me out of the cave and then dumped me on the travelling cloud.

I looked up at Ri, and said with all the sincerity in my heart, "Thank you."

Ri gave a quick pat on my head and said, "Sleep."

That was the last thing I remembered of that night.

When I woke up the next morning, I saw that I was in a room in the Inn next to the Drunken Chicken Restaurant. Ri was at the bedside table.

I looked out the window and saw that it was already mid-day.

I was suddenly seized with worry, "Are the mortals in the Drunken Chicken Restaurant ok?"

Ri gave me a thoughtful look and nodded, "After you were gone, I searched the surrounding premises and found them unconscious in the backyard. I neutralised the poison and swiped their memory before I left to find you."

"How did you find me?" I asked curiously.

Ri started to laugh, "I put a tracer on you since the first moment we met."

"It's kind of like an essence mark - with that, I can trace you wherever you go," Ri explained.

My eyes widened slightly as I realised that my father had probably put a tracer mark on me too... so he should have known that I left the Dark Realms when I did...

Before I could ask anything further, Ri placed a warm crystal bead in my palm, it looked like a translucent tiny golden universe, "Break this if you are ever in danger."

Although the warmth of the crystal bead only touched my palm, a strange warmth trickled into my heart. I smiled, "Thank you."

Ri turned away, "Don't thank me. What good is a promise from a dead pig?"

Previously, I would have scowled internally at that, but I smiled to myself. I realised that Ri was the kind of person who became uncomfortable when people spoke sincerely to him.

I smiled at his back and added, "I will keep it carefully."

Wang Huan proudly placed her dish of fried chinese long beans on the dinner table. She had decided to spend the rest of the week in Zui Town at the Drunken Chicken Restaurant to master the recipes in the cookbook. While she learned to cook, I had placed a small protective spell at the restaurant and scouted the outskirts of Zui Town... indeed, there was a strong aura of demonic energy, although most of the demons appeared to have left for now.... perhaps from the death of the Scorpion Demoness.

This pig was turning out to be more troublesome than expected. She had weak divine energy but also powerful blood. Greedy like anything but everything also wanted to eat her up. I shook my head, I suddenly understood how the Monkey God must have felt when he travelled with the Tang Tripitaka Master.*

"So you cooked all day and only learned one dish?" I arched my brow at the one dish placed on the table.

I saw Wang Huan resist rolling her eyes as she started to nibble on the long beans, "Another duck dish will be coming out, but it's not cooked by me."

I decided to ask Wang Huan something that I had been curious all night, "Last night, you said you hated Prince Sun. Why do you hate him?"

Wang Huan's eyes widened a little in surprise, but then she turned away. She looked out of the window with a far away look, "Do you really want to know?"

The roast duck was served onto the table at this time and Wang Huan turned her head back, "My friend and his whole tribe was eliminated by Prince Sun. Do I need to explain more?"

I felt my heart sink. Unless, she is referring to the Spider Demon Tribe?**

Wang Huan poured alcohol into two small cups. She grandly passed me one, "This is to thank you for saving my life."

But her bright smile somehow pierced painfully into my heart.


*Tang Tripitaka Master also known as Tang Sanzhang is the monk in the famous story, Journey to the West. The Monkey God will be escorting Tang Sanzhang to the West to retrieve original Buddhist scriptures for China and along the way lots of demons will attack them as Tang Sanzhang's flesh is fabled to give anyone immortality if you eat it.
** Click above to see the link to Chapter 5 of Little Moon.

Comments: Secrets! So many secrets...