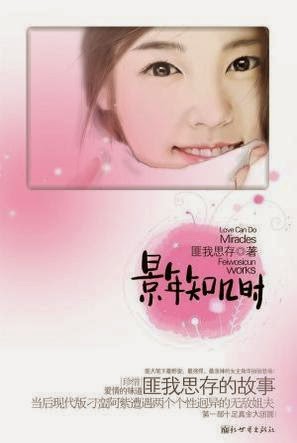 I never thought I would read a Fei Wo Si Cun novel, because she is the famous "stepmother" of c-novels - so called because she "mistreats" her "children", the lead characters of the novels. She is famous for having tragic endings in her novels, the characters will love each other literally to death. Love Can Do Miracles is interesting because it's a rare happy ending from Fei Wo Si Cun. Still, I wasn't too interested until I read the wonderfully hilarious chapter 1 translation by sutekii (yes! I am finally reviewing a book which also has ongoing english translations haha). Since I  was helping sutekii post this book on SSB, I decided to also write a review and a favourite scenes translation for this book.

I was surprised to find a very interesting female lead and a set-up that I enjoy - female lead divorces the male lead, despite still loving him. It is also clear to all the characters who have eyes that the male lead loves the female lead - so why does she think he does not love her?

The summary I posted on SSB:

After wrecking her brains and exerting all the efforts in her body and heart, she could finally be with him, the lover of her deceased sister. But, Ye Jing, who is as wild, unreasonable and fierce as Ah Ci*, how could she bear the poisonous tongue of her "brother-in-law" as he wrongs her true heart time and time again? After finally successfully divorcing him, she starts being chased by another gentle "brother-in-law" who used to love her sister. To protect the "Little Yellow Bean" in her stomach, Ye Jing could not help but start her long battle with the two undefeatable "brother-in-laws".

Love is difficult and confusing, as the misunderstandings increased and deepened, fate suddenly gave Ye Jing a cruel strong punch! Will love be able to create a miracle for Ye Jing so that she will be able to unite with her true match? May you also believe that love can create miracles!

*Ah Ci is a famous character in one of Jin Yong's classic novels, Demi Gods and Semi Devils. She famously fell for one of the heroes, Qiao Feng. However, Qiao Feng was deeply in love with Ah Ci's older sister, and it was Qiao Feng's love for her older sister which caused Ah Ci to fall for Qiao Feng because she wanted that same deep love.

Now, the question I posed at the start of the entry, "Why does she think he does not love her?" This is never really properly answered in the novel. Fei Wo Si Cun has a very interesting set-up - she is drawing a parallel of Ye Jing with the famous Ah Ci, who was a very cruel and manipulative little sister who used the guilt and love Qiao Feng had for her older sister to try and transfer that love towards her (since Qiao Feng agreed to the older sister's dying wish to take care of Ah Ci). Can such a cruel and manipulative little sister become the cinderella of her own story? I thought this was the question being explored in the novel, but that was not actually the twist Fei Wo Si Cun had in mind.

So, when it starts, we see Ye Jing having divorced Lu Yu Jiang after some effort, the sizzling love-hate chemistry between Ye Jing and Lu Yu Jiang is interesting - but as the novel went on, the "hate" part was confusing. Because, why really does Lu Yu Jiang hate Ye Jing? The assumption seems to be Ye Jing's "guilt" because when Lu Yu Jiang was grieving and drunk, she had seduced him into sleeping with her and forced him to marry him. They were then married for 3 years when she finally decided that she should let herself and him go from the "loveless" marriage.

But, you will feel confused because Ye Jing's character as you see her doesn't seem so manipulative? And Lu Yu Jiang (the rich cold president character type) does not seem like an easy character to manipulate? So, the *twist* is that Lu Yu Jiang met Ye Jing first and had always loved her, but her older sister, who had some life threatening illness, fell for him and so he decided to be nice to her older sister and care for her in her dying days, although he had always loved Ye Jing instead. That would have been a nice twist - but there is a big logical loop, why did he make Ye Jing bear the guilt of their relationship for three years of marriage if he supposedly loved her?

So, while I enjoyed the chemistry of Ye Jing and Lu Yu Jiang, I was emotionally unsatisfied because of the huge logical leaps or should I say illogical leaps the characters take in the novel. Not to mention, the second ridiculous *twist*, where Ye Jing has the risk of the same life threatening condition of her sister! With that said, Ye Jing is a very likeable character and you want to root for her to find her happiness. It helps that there are likeable supporting characters, such as the second male lead, Yi Fei Fan, who is clearly still in love with her older sister but starts to chase her and start a cute fight between Yi Fei Fan and Lu Yu Jiang.

I think this is the kind of story where you kind of forget your brain and go with it. To make up for it, the ending is nice and the epilogue  for Yi Fei Fan is wonderful.

Here's a translation of my favourite scene in Chapter 7:

He lifted up his head to look at me, he gritted his teeth and asked, "Ye Jing Zhi, do you hate me so?"

I said, "I don't have the energy to hate you. Let me tell you, if you do this again, I will call the police!"

Lu Yu Jiang gave a cold laugh, "I will leave immediately. Don't worry, when you and Yi Fei Fan get married, I will definitely send a red packet**."

I am not so stupid to believe that he was jealous. The enmity between him and Yi Fei Fan is too deep, plus the fact that I made Gao Xi Li (someone Ye Jing believes is Lu Yu Jiang's current girlfriend) angry, I guessed that Gao Xi Li must have broken up with him, hence he was so angry.

He finally left. I sat here, my clothes in a mess, my feelings numb.

I could not forget his expression when he spoke, it was filled with disgust and disdain, and also a trace of an inexpressible painful hatred. His words kept echoing in my ear, as he asked, "Ye Jing Zhi, do you hate me so?"

I did not hate him at all, not even a little bit.

I was this useless.

At the start, he did not know my older sister for very long and she fell sick. He was extremely righteous, he paid for all of my older sister's hospital bills. You must realise that for a normal family, the hospital bills were an astronomical sum. Luckily there was him, if not my older sister would not have lasted so long. But finally, my older sister had withered until she could no longer go on, in her sickest moments, her temper was very bad, but he would always gently and carefully cajole her to be happy. He would go to her hospital ward everyday to help her comb her hair. Sister used to have a head of beautiful hair, but because of the medicine, they had almost all fallen off. When he combed her hair, he was always very careful to hide the strands that fell off, so my sister would not know and become sad.

At that moment, I thought, this man is someone you could give your life to. My older sister must have been very very regretful that she could not marry him.

I used all sorts of methods to marry him. I was afraid he did not love me, but, I still loved him.

In Demi-Gods and Semi-Devils, Ah Ci said, "On that night, in the huge thunderstorm, at the little bridge, I saw you kill my older sister. You cried so heartbrokenly that my heart started to really really like you. My heart said, 'You don't have to be so sad. Even though you no longer have Ah Zhu, I will be like Ah Zhu, I will treat you well and love you with all my heart.'"

In the end, Qiao Feng still did not like her. Dislike is dislike, one cannot force it.

Even at the end, in front of death, Ah Ci hugged Qiao Feng, and jumped down the lofty and bottomless cliff.

I felt that Ah Ci was much luckier than me, I did not even have a chance to hug Lu Yu Jiang and die together.


** For Chinese Weddings, guests will give a red packet of money as a form of blessing.


I thought that beautiful scene above was the heart of the book. Although it did not live up to its promise, it still left its imprint on me.

Email ThisBlogThis!Share to TwitterShare to FacebookShare to Pinterest
Labels: Love Can Do Miracles, Reviews