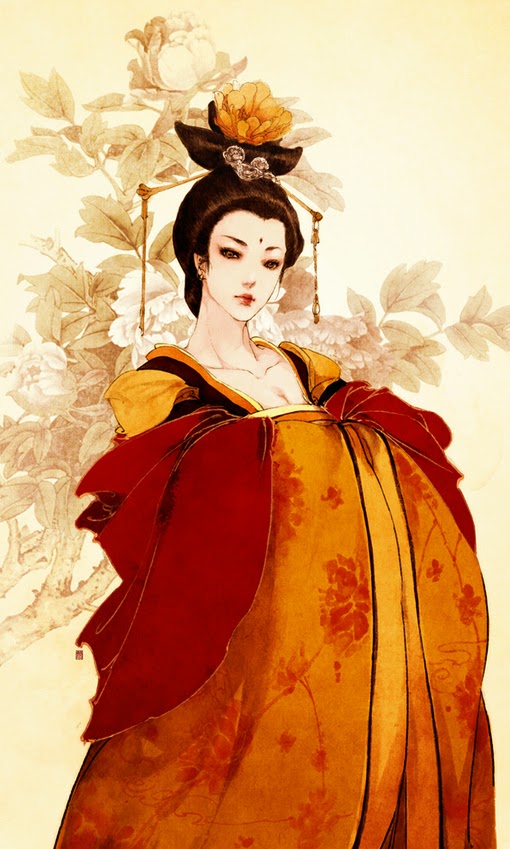 I really want to update The Sun's Dark Love, but I haven't been feeling too well and it's harder to write than translate haha. So, here's another translation of Heavy Sweetness! Did you guess correctly who was in the room waiting for Jin Mi?

Something deep, dark and fiery...

"Jin Mi Immortal, you have made me wait for very long..." The voice came from upwards, looking down at me from her proud upturned chin.


Ah ah ah, I have been cheated, cheated.

I climbed up from the floor, flicked my robes and hit my forehead, "Ah? I had came to meet Tai Shan Grand Immortal to see him make his pills, but the immortal attendant must have gotten lost and mistakenly brought me here. I have disturbed your Majesty. I truly shouldn't be here, Jin Mi shall make her leave," I bowed and quickly headed for the exit. Who knew that there was a golden lit boundary at the door and it immediately threw me back.

"It's true that pills will be made today," The Heavenly Empress gave out a cold laugh, "Except it isn't one made by Tai Shan Grand Immortal..." She dragged her robes on the floor and slowly took two steps forward, "I have always been curious, what exactly is Jin Mi Immortal's true self? Why don't we take the opportunity to test this today? It will be an eye-opening experience for me." 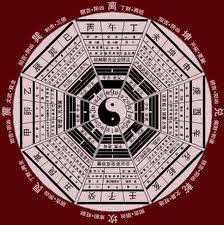 I suddenly realised that I had been placed on a Ba Gua wheel, on this wheel there was the extremes of Yin and Yang*. The Heavenly Empress was positioned on the Yang side of the wheel, and I was locked by a boundary on the Yin side. Surrounding the wheel was a circle of water, and in that water were two or three fiery red carps swimming in a carefree manner.

I touched my hairpin, my heart became alarmed when I felt a rough texture. I realised that because Daddy had told me to keep Phoenix's Great Phoenix Feather Treasure, I had changed my hairpin to a normal grape stem. With nothing to protect me, how could I battle the Heavenly Empress?

"The Heavenly Empress must be joking. The previous time in the Nine Mist Clouds Palace, didn't Water God Daddy already announce to all the gods that Jin Mi's real self was a six petalled frost flower?"

The Heavenly Empress gave a snort of derision, "Zi Fen, that demoness, based on her few good looks she was able to seduce the Heavenly Emperor and the Water God, who can really know who your father is? Even the Water God can not truly be certain in his heart. Rather than just believing in words, I prefer to ascertain it with my own eyes. Since no one has seen your demonic real self, today I shall test it out for myself." 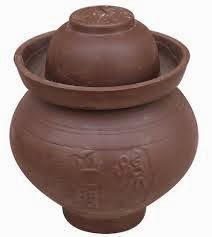 After speaking finished, she transformed a green jade urn, and with a turn of her body, something started to flow out of the urn and seeped into the circle of water that surrounded the Ba Gua wheel. I smelled a strong scent of alcohol, that urn must contain top grade strong wine.

As the wine slowly mixed into the water, it seemed like there was nothing unusual. However, when the wine mixed with the water in which the red carps were swimming in, suddenly with a sizzling sound, there was a burst of red raging flame. I realised that what was peacefully swimming in the waters were not red carps, but shaking balls of fire. Quickly, the balls of fire were activated by the wine and the Ba Gua wheel was surrounded by a raging wall of fire that encircled both of us.

I felt my whole body heat up and my insides rumbled.

"There are eighty one types of flames, the flames from the firefly, from the candlelight, or torch, these flames will have no use against Jin Mi Immortal. Since we don't have much time, I have started to test you from the fourth level of flames, what do you think?" The Heavenly Empress twisted something in the air and the fire surrounding the Ba Gua wheel suddenly became stronger. "That year, your mother was able to tolerate until the last level, the strongest fire of all - the poison fire. I wonder what level will you be able to tolerate until? I am full of anticipation."

Goddess of Mercy! The Great Buddha Grandfather! The Heavenly Empress was indeed vicious and cruel. I had actually hoped that if I did not hurt anyone, no one will try and hurt me, but who knew, how evil some people's natures could be? Ah, some people's basic natures must be evil. I was a frost flower made of water, even if I was only a simple grape, since she was the previous Fire God, there was no way I could tolerate her torture of fire on me. Even though she said she wanted to find out my real self, the truth was that she wanted to put me to death, to eliminate all traces of her wrongdoing.

Since it was hopeless to try and escape, I could only try and tolerate for as long as I could. I efficiently used a thin layer of divine energy to protect my important meridians and created a thin protective layer to block out the oppressive hot air. Even though my divine energy was weak, surprisingly the fiery fire appeared like a ferocious tiger that had its head quickly chopped off, and could not come near me. This was a surprising outcome that gave me joy.

In the span of half a pot of tea, I heard a cold laughter in the sea of fire. With a wave of her hand, the pool of alcohol suddenly became boiling oil, the colour of the flames deepened and started to splatter directly towards me.

"The seventh level of fire, the boiling oil fire!"

I called out some divine energy from my stomach to strengthen the boundary protecting myself - but who knew the boiling fire did not weaken but seemed to stick onto the boundary and seemed to grow fiercer in strength. Watching it grow fiercer made my heart quickly increase in panic!

The Heavenly Empress' brow twitched, as if she was really a bit surprised, "So it turns out that you are really Luo Shen's**..."

I did not have the energy to care about her figuring out if I was born from the Heavenly Emperor or the Water God. I only saw that the fire seemed to grow thicker and fiercer as it moved closer towards me. I realised that the boundary I created earlier was made of water - although water could eliminate fire, that was only ordinary fire, but oil could float on water, hence the oil fire did not fear the water but actually floated on the water and grew stronger.

Just now my water boundary could eliminate the alcoholic flames, but this water boundary suddenly became a crutch that brought the oil flames onto me. This must be how the Heavenly Empress determined that I was the Water God's offspring.

I pressed three fingers to my mouth and shouted, "Destroy!" In a moment, the  water boundary cracked. The oil fire floating on the water boundary immediately dissipated. Although the flames had disappeared, so did my protective boundary of water and the heat from the flames surrounding the Ba Gua wheel attacked me. I felt great pain all over my body, as if I was being whipped, the little water mist that was on the wheel was swallowed up by the flames and disappeared without a trace.

I started to cough repeatedly as I fell down to the wall grabbing my chest. I could not suppress my coughing. In the end, I tried my best to congregate my energy and finally managed to speak, "Heavenly Empress... Empress... if you destroy my divine essence, I'm afraid... afraid you will also kill fire... the son of the fire god!"

The Heavenly Empress' face completely changed, "What did you say?!"

I weakly lifted up my hand and touched the space between my brows, "Inside, there is Second Highness' divine essence... in not more... than ten years... ten years..."

"Impossible!" The Heavenly Empress interrupted me.

The Heavenly Empress stood at the heart of the raging sea of fire, her face darkened to the colour of black ink, both her hands tightened and I could see the green veins pop out from the back of her hands. I did not know if she was angry or furious, shocked or suspicious.

I licked my cracked lips, the broken feeling caused me to furrow my brows, I say simply, "If.. if you don't believe, why don't you test... test my divine origins..."

The mortals have a saying - even the ferocious tiger will not eat its children. But, will the ferocious tiger eat its grandchildren? However, the surrounding flames seemed to weakened a little and I took a large breath of air. As I saw the Heavenly Empress step towards me and leaned down at the side of my body, she lifted her hand and tested my pulse, "You demoness, you dare to seduce Phoenix..."

I closed my eyes, bit my teeth and gathered all my strength in one palm, but this palm squarely hit the Heavenly Empress' palm. Even though fire could cook water, I did not believe water was unable to counter fire! I was a sprite and hated it most when people called me "demoness"!

From my palm, out came a sharp snowy white silhouette like a flash of a blade, this blade was the coldest ice in the universe and it attacked the Heavenly Empress. The sharp ice blade cut into her palm.

The Heavenly Empress' face changed and she tried to retract her hand, but it was too late. The moment she realised it, she opened her mouth and started to chant. A bud of flame started to grow out of her palm, a red lotus slowly blossomed.

I quickly kept my hand and managed to retract my palm fully in the last few millimeters just before touching her killing blow. Thirty percent of my full force fell back onto me and caused my whole chest to tremble. I did not know if my bones had broken.

The Heavenly Empress' palm was cut by my icy blade force earlier and the cut started to show fresh blood. She rose up, her face full of fury, "Demoness! You dare to try and kill me! You have overestimated yourself! Today, I will completely destroy you and cause you to fully incinerate!"

Even though I was on the thin line between life and death, I couldn't help scolding Master Pu Chi. If it was not for him saying that you could give birth to babies after mutually cultivating, I would not have thought up of such a plan to try and trick the Heavenly Empress and attempt to kill her.

If I had only burned to death, there was still a chance my little soul could reincarnate or become a mortal. But, if my soul fully incinerated, there will be nothing left of me.

Trembling, I closed my eyes to accept my fate. But, I suddenly heard a sharp cry, "Jin Mi!"


*In chinese mythology/philosophy, the universe is made up of Yin (negative) and Yang (positive) elements. Eg, Yin - moon, female, dark. Yang - sun, male, light.
** The Water God, in case you have forgotten his name.

Comments: Haha, can you guess who the voice belongs to?