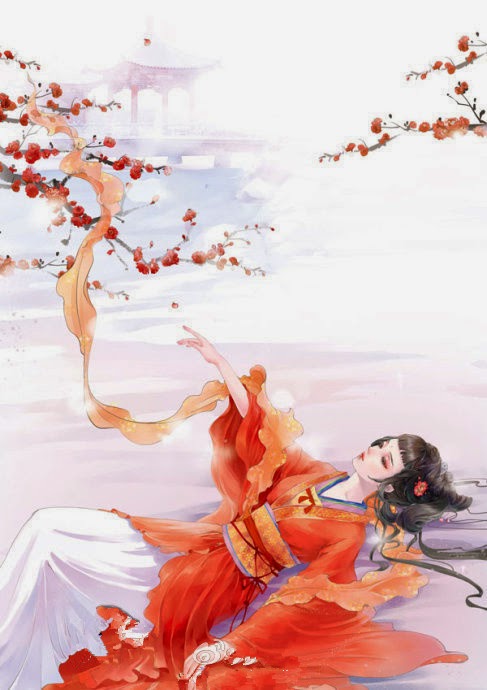 After translating the last of Chapter 15, I couldn't help being impressed by the delicacy of Dian Xian's writing - the moon light, the ripples in the water, the red phoenix flowers, the incinerating gaze, the feeling that teeters between pain and pleasure. So, this is love?


After I finished speaking, I turned around angrily, and forgot to say a water incantation to remove the water droplets from my soaking wet body. But just as I took a step forward, my upper arm was grabbed back by a sudden force, that strong force pulled me back and my body was pressed onto the trunk of the Phoenix Tree next to the pond.

Because of the sudden strong pressure onto the Phoenix Tree, all the flowers on the tree started to fall onto the floor, these brilliantly red petals descended silently onto the ground. In the midst of the rain of petals, Phoenix stood tall in a robe of white, his robes were half opened, his brows and hair were wet and the droplets of water fell from his head. One drop by one drop these water crystals slid down his chest and into his robes, into somewhere far away, a place that one could no longer find.

With my back against the rough bark of the trunk, my wet clothes caused my body to be more sensitive, and I could only feel the fiery hot pain searing through my back. I tried to struggle but froze under Phoenix's murderous killing gaze and aura.

"You...you... what do you want...?" Finally I managed to force some words out of my throat but these words were torn apart by the touch of Phoenix's cold hands.

"What do I want? Naturally, I want to find out how you will make it so I will no longer be able to use this part? Hmmm...?" The lift at the end of his tone was like the sharp edge of the blade that cut through a tight string in my brain, I couldn't help but shudder. He remained unmoved, he released my upper arms which had been so forcefully pressed until they had became numb, inch by inch, his hands moved towards my neck. His movements were almost gentle, but his expression was the complete opposite. It made one think of a predator before it attacked its prey, bloodthirsty and cruel.

The moon was in the sky, the evening wind was chilly. The bright clean light of the moon shone down and fell into the pond, lighting it up with its silvery beams. The water reflected the sky, it was so clear and bright that there was nowhere to hide.

Under the moonlight, Phoenix slowly moved closer, his gentle but strong fingers slowly tightened around my throat. I had no strength and tried to struggle, but my breath became weaker and weaker, shorter and shorter. I finally realised that I had became Mr Dong Guo*, kindly saving someone, but now he wanted to sentence me to death. Just as I was about to suffocate, I decided to catch my last trace of breath and choked out, "Ph....Pho...Phoenix."

Phoenix suddenly released his fingers around my neck, and gave me an alluring smile that would intoxicate everyone. I gazed at him in confusion as my chest rose up and down. A wind blew by, the clouds softly floated in the dark night and covered the moon. In one moment, everything darkened.

In this peaceful and quiet moment, I only felt him lower his head. A pair of moist lips pressed onto my equally moist lips, the lips pressed upon all sides without leaving any empty space, these thin slightly cold lips were like the river water washing by the pebbles, moist and gleaming, it enticed one's senses. He reached out his hand and held onto the back of my head, his body pressed towards me, there was no space between us. My gasp for breath was swept away by the intrusion of the edge of his tongue. As I just escaped the threat of my life, my heart couldn't help relaxing, and slowly I became curious and kissed him back. Phoenix's whole body trembled, as if his body was suddenly filled with a burning heat. My back had been abraded by the rough bark of the tree and I did not know if it was painful or hot, being pressed upon by the front and back, I only felt like a water dumpling that was being boiled, and felt my limbs lose its strength.

In a moment, my back was empty and cold. Phoenix placed me at the side of the pond, I did not know when his clothes had been removed. I daringly looked at his strong chest, it was in this silence and stillness, that it felt like some energy was being stored.

As my gaze slowly lowered, I saw something strange, my heart stirred, I couldn't help being curious, the first time when I saw him in the Water Boundary, it did not appear like this...

The sound of Phoenix's panting deepened, I lifted up my head, my gaze knocked into his passionate determined gaze. I felt like I was in a trance - put under a spell by the smooth contours of his bone structure, my hand reached out to touch his collarbone, suddenly I felt that I was not frightened by anything.

He grabbed both of my hands, and slowly placed each finger in his mouth and kissed it, I couldn't help lightly trembling, the ten fingers connected to the heart, in one moment, I felt my heart being filled to the brim.

Under the faint purplish red moon, the osmanthus scent surrounded my body, and I suddenly realised this was the sweet scent of wine. After finishing my fingers, he licked my ear lobes and started to move down. I then realised that not only him, but my clothes had unravelled without my knowledge, there was only the starlight on my body.

The beautiful flower petals that floated in the shallow water rise and fell with my body, but what was more densely intimate than the flowing water was Phoenix's kiss, from the back of my ear to my neck, from the side of my chest to the top, this usually proud and arrogant man circled around me, as if he was land that had suffered drought and was finally receiving rain, he passionately occupied each inch of my skin.

Although my consciousness was overwhelmed, my body was as sensitive and aware as I could be. I only felt a sense of burning, as if my whole body was going to be incinerated in this burn. In my misty consciousness, I thought that Phoenix's nirvana burning could not be as hot as this.

He did not dominate over me, and I forgot to run away.

My heart beat was like thunder, as if something was filling me up, I opened my mouth and foreign broken sounds fell out in fragments. I did not know what that was but I felt something pierced into my body. That startling pain, the shock was like the first sound of thunder in spring, that broke through the sky. Then suddenly, after that moment of clarity, I fell into a fantasy-like state with clouds and mists surrounding me.

Although I was thinking that I should push away this person who brought me pain, my mouth went to bite his shoulder and won't let go. The breathing sounds of the person accelerated.

While walking it appeared like there was a chance of spring rain, but after a sleep, one felt relaxed like a cloud on a high mountain.**

The red phoenix flowers floated upon the water ripples, a delicate red drop went out of the body, and followed the ripples and disappeared.

Our dark hairs tangled in the water, our naked arms entangled under the moonlight. After the ripples in the water ceased, he pulled me to his chest, his heart was beating extremely fast, it was too full too full, he could not pretend any longer, and it spread out of his lips.

The sky as our blanket, the water as our hut.

In this night, under the burning red flower tree, in the clear pond, time and time again, I was entangled with this person who only a moment ago wanted to strangle me to death.

In all, it was a good day to do everything with no taboos!

*Mr Dong Guo is a character in a story who saved a wolf, but the wolf still wanted to eat him.
** Dian Xian was quoting a line of famous chinese poetry and I translated it to capture the meaning.


Comment: Haha, I am very curious to see what the response is like to this pretty epic scene.

Jin Mi has now crossed a line - what tremors will this bring?
Posted by Decembi at 08:00