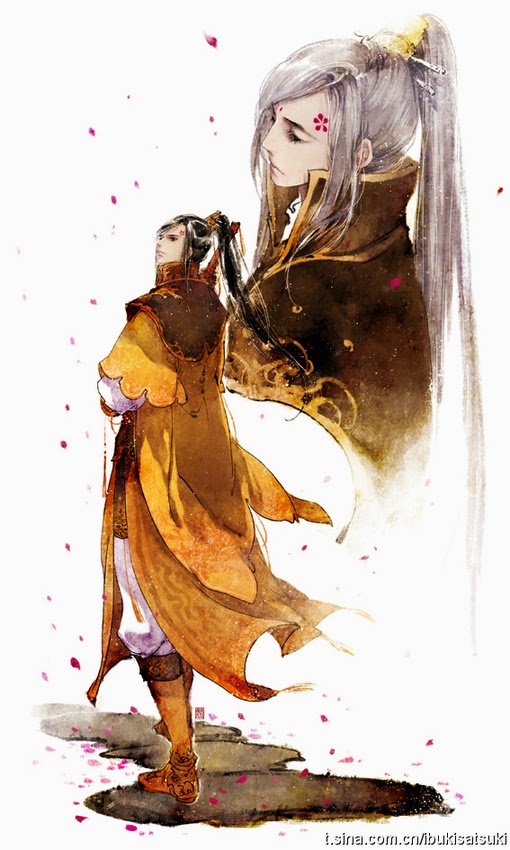 Xi Yang's epilogue is not so much an epilogue, as it is a bridge towards a new future.

Today is Yu An’s twelfth birthday. Sometimes when I thought about how fast time flew, I would think one hundred years were not enough. No, not even a thousand years. I had Yue for a hundred years, but you will have her forevermore Hsiao.

I still remembered when you asked the Moon God for an opportunity to meet me. It was during Yue’s lost years. I had rejected you but you declared to the Moon God that you needed to meet me in order to bring Yue back again. So, I did.

The Emperor of the Yan Kingdom. A golden boy just like me. But, you knelt down before me and asked me to help you. You said I had once told you that you had a golden light surrounding you – destined to become the Emperor, your life was so hard, that the small poison won’t be able to kill you. You asked me to go to the Wu Kingdom to find the same person with a golden light – to find the next Wu Emperor.

You could see it then – the future crisis ahead, the bridge you had to cross, the tower you had to built to become the greatest Yan Emperor. Sometimes, I wondered, if I had chosen not to help you – would you have married that Wu Princess who so adored you? Would Yue then belong to me?

But I helped you. Found that unlikely person who was to ascend the throne of the Wu Kingdom in that not too far away future. In some ways, even if she was no longer around to call me Xi Yang Ge Ge, a part of me still wanted to live up to that name.
Ten years passed – in the span of our infinite days, ten years was actually short. But, your absence weighed down everything.

That day, that very day, when the red thread Yue had become due to karmic retribution, floated before the Moon God in Heaven again and was re-born into Yue. I knew – it was all worth it.

I had rushed to the Moon God’s Heavenly Temple of Matrimonial Bliss as I watched Yue dance up and down in delight. “I’m back,” Yue cried, and when she saw me her face lit up and then fell, as if not knowing how to greet me.

“Mei (younger sister),” I smiled and Yue rushed into my arms.

“Xi Yang Ge Ge,” Yue teared as I embraced her.

“Xi Yang Ge Ge,” she smiled as she wore the red bridal gown, put on the golden phoenix crown and sat in the red sedan chair.

“Xi Yang Ge Ge,” I heard her say as her red sedan flew down towards the Yan Kingdom, once and for all.

“Xi Yang Shu Shu (Uncle),” Hsiao Yang giggled as he rushed towards me. Hsiao Yang was Yue’s four year old son, he looked exactly like Yue and had her personality.  The only prince of the Yan Kingdom, but he clearly did not have the makings to become the next Emperor.

I patted Hsiao Yang’s head as I passed him a magical toy one of the Heavenly Royal Maidens had given me. It was magical paper that could be folded into different creatures and take on a short life of their own. 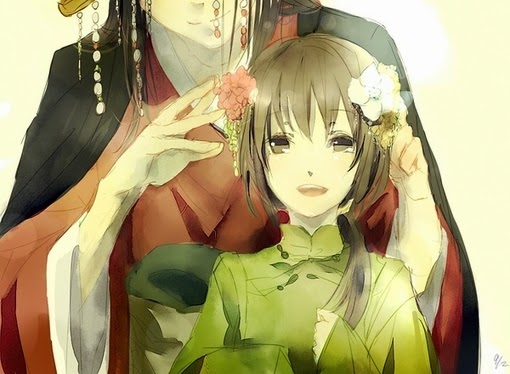 “Xi Yang Shu Shu,” A soft melodious voice cheerily called out to me. I lifted up my head from Hsiao Yang and saw the birthday girl.

Yu An looked like Yue and did not look like Yue. Yu An had Yue’s small round, almost heart-shaped face, with a kind of spark like the young luminescent moon. However, her eyes were too intelligent and clear, too much like Hsiao.

“Yu An,” I smiled and handed her a golden silk-wrapped gift, “For you.”

“Xi Yang Ge Ge,” I heard Yue cry as she jumped onto me from behind. A mother of two, but she still acted like she was two.

“No presents for you,” I said as I watched Yu An carefully unwrap the gift.

Yue smiled and squeezed me from behind, “Your presence is enough”. A more ill fitting Empress I could not find.

Yu An gave a gleeful surprised cry as she looked at the shimmering large silver lilac trumpet triton shell in her palm.

Yue gave me a semi-sad and wistful look, “You are biased, Xi Yang Ge Ge. You have never given me such a gift.”

After Yue married, I never gave her a gift again. Not to her directly at least. Because, if I did, my mind would only be able to think of what I could give her.

“Because you won’t be able to appreciate it!” I replied as Yue led us to the royal garden pavilion where a birthday feast had already been prepared.

I nodded at Hsiao who was already seated at the table with the Moon God. Yu An rushed towards Hsiao, “Father, look at the gift Xi Yang Shu Shu gave me! The mermaid’s song has inspired me to compose a new theme.”

Hsiao looked dotingly on Yu An as he stroke her head, “Play a song for us.”

After we were all seated, Yu An sat at the guzheng* that had been prepared at the side of the table and started to play – as her fingers caressed the strings, golden notes transversed the air, physically embodying her joy and love for those who had come for her. 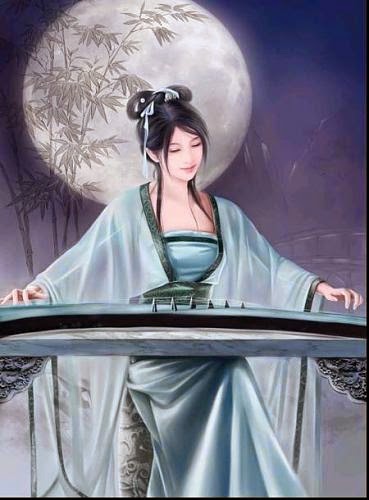 (* The musical instrument you see in the picture. Yu An is only twelve, so nowhere as old as the picture. But, one day, she will be like this perfectly!)

After Yu An finished, Hsiao gave an almost sad wistful look in his eyes, “Looks like there will no longer be a music teacher good enough to teach you.”

“Not in the Yan Kingdom at least,” I added.

Hsiao narrowed his eyes slightly at me as Yue looked curiously at me. I smiled, “The most famous and gifted musician in all the lands in the mortal realms must be the Royal Princess of Wu.”

Yue smiled at Hsiao, “Perhaps you can ask if Yu An could visit her considering you are such good friends with the Crown Prince of Wu?”

“I will think about it,” Hsiao smiled to Yue, and then he turned to me, “Xi Yang, I heard the Jade Emperor has been very concerned about your marriage.”

At the mention of marriage, Yue’s eyes positively glistened, “Is there a female goddess in mind?”

But even before I could answer, Yu An hurried over and placed her hand on my shoulder, “Xi Yang Shu Shu is mine!”

The silence could only be described as golden.

When we returned to Heavens, the Moon God gave me an enigmatic smile.

I darkened my glance at the Moon God, “Uncle, you should know best. I do not even see Yu An as a girl, much less a woman.”

The Moon God only chuckled, “You cannot see what I can see afterall.”

Indeed, I could not see what the Moon God could see. For the very next morning, I was summoned to the Royal Hall to meet my father.

I was surprised to see several important gods, but most of all, to see the Jade Emperor and Empress sitting grandly on their thrones. I thought this was a personal meeting with my father, was an important message about to be announced?

“Xi Yang,” My father smiled at me and with a flash of lightning from his hands, a golden glittering banner unfolded in mid-air.

It was inscribed, Crown Prince Xi Yang of the Heavenly Realms will be engaged to marry Princess Wang Huan (王欢 Royal Joy) of the Dark Realms.

The Jade Emperor beamed at me, “Since you declared that no goddess will do for you in the Heavenly Realms, why not a foreign princess?”

I could almost hear him add in soft mutter, better than a mortal at least.

The Jade Emperor announced in a grand declaratory fashion, “The Moon God had decreed that there is a glittering golden marriage thread between the Crown Prince and the Dark Realm’s Princess Wang Huan. It would be a reunion that will create many celestial blessings! An auspicious engagement!”

I turned to glare at the Moon God. But, he only returned his usual enigmatic smile. You cannot see what I can see.

Indeed, all I could see was betrayal.

Comment: Haha! Did anyone think for a moment that my planned match for Xi Yang was Yu An? My stand on that is nooo, because I find that very strange. Yu An is Yue’s daughter afterall, and it feels almost incestuous. Although Yu An looks quite like Yue, she’s clearly all Hsiao inside which would make Xi Yang flee.

Xi Yang dotes on Hsiao Yang and Yu An, not so much because he likes them for who they are (he does in his own way), but more so because they are extensions of Yue, close enough, but still safer for him to express love.

I planned Xi Yang’s match from when I was sketching out the story of Little Moon already. Moonblossom helped me to find a suitable royal name for this mysterious princess. I told her that I had planned the female’s name to also originate from the same poetry line I took Xi Yang’s name from – 夕阳近黄昏 (Xi Yang Jin Huang Hun), which conveys the idea of the golden yellow intoxicating beauty of a sunset. Wang Huan’s nickname is Little Yellow. Haha.

I thought since Little Moon was about matchmaking, it was only apt for Xi Yang’s own series to be about contract marriage! I’m super excited to share Xi Yang’s story, and I can only hope it will live up to expectations.

Additionally, for those who were hoping to see Hong Meng’s epilogue, I decided that it won’t be interesting enough for its own epilogue but you will get to find out more about Hong Meng and Hu Jun’s story in the later stories I will write. :)