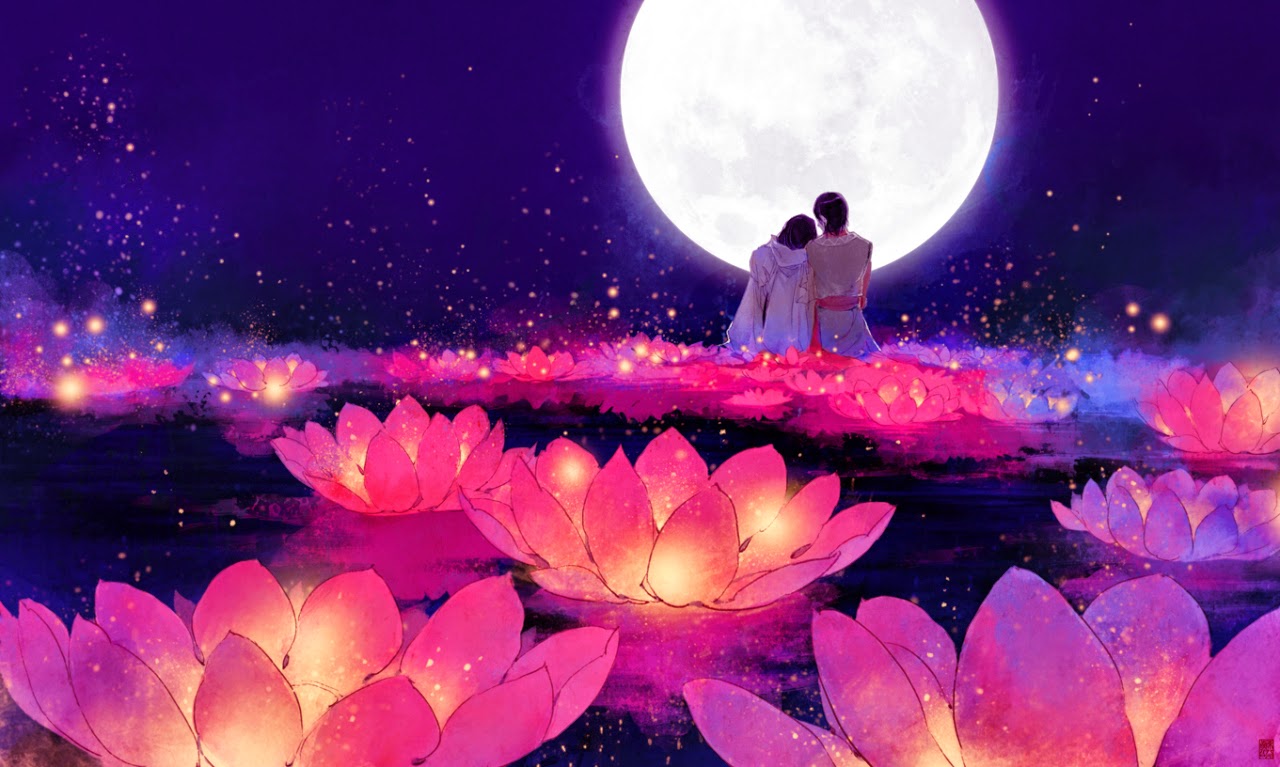 I’m very happy to share chapter 15 because this was one of the very clear scenes in my head when I started sketching out the story. And, the picture I found for chapter 15 (insert many tiny hearts), I love it so much! The story will probably be either 17 or 18 chapters.

I was a person of fleeting moods. Gods did not need to eat, but I always enjoyed having meals. And, for every meal, I would often struggle to decide what to eat – only because there were so many different types of dishes I desired.

For a person who struggled even with the simplest decisions – fried or steam? Spicy or salty? Chicken or duck? Strangely, I had no hesitation at all when I was faced with the life-changing decision of choosing between being a Moon Maiden or being with Hsiao.

Because, the choice was always illusory. Wasn’t the question, at the core of it all, to pick the path true to one’s self?

I smiled warmly at my uncle, my eyes crinkled into tiny crescent moons like him, “Uncle, I love you.”

Uncle patted my head, “You have picked a hard road, Yue. Then again, the course of true love never did run smooth.*”

“Your divine core is unstable and you are extremely weak. I will send you down during the night when the moon is strongest to meet Hsiao,” Uncle said as he slowly strand by strand placed my stray hairs away from my forehead and behind my ears.

“I object!” I did not even need to lift my head to know whom the angry voice belonged to.

“I will personally guard this door to stop you from ever going down to the mortal realms again,” Xi Yang declared and glared at me.

“What’s there to speak of? I have already told Hsiao about your identity and destiny,” Xi Yang said, I could tell he was furious and I could see the fine green veins popping up at the side of his forehead.

“Uncle, I cannot believe you are supporting Yue in her foolish endeavour. Are we to watch her walk onto the path of self incineration?” Xi Yang shook his head in disbelief at Uncle’s resigned acceptance.

“Xi Yang Ge Ge, I love…” before I could finish, Xi Yang interrupted me.

“Yue Er, then how about my love for you? Because you love Hsiao, you can give up your fate and face karmic retribution for him. Then how about my love? Uncle’s love? Is the fate of our love to watch you self incinerate? Do you know what that means? There is no reincarnation for a red thread,” Xi Yang spoke in a conflicted tone that hinted at the deep feelings he was suppressing.

I shook my head, “Xi Yang Ge Ge, 太迟了 (it’s too late). At the start when I allowed Mei Yun to marry Gentleman Yun Feng, when I encouraged General Tie Shi to pursue Princess Bai Ying, I had already plunge forth deep into my feelings and not looked back.”

I raised my right palm to Xi Yang, the third red dot was already half black, “Even if I stayed in heavens, at the most, I would only be a shell, Xi Yang Ge Ge.”

I lifted up my eyes directly into Xi Yang’s eyes, the pain that flickered in his eyes twisted my heart. My Xi Yang Gege, the person I admired most after Uncle, everything he did was magnificent, my always arrogant protector.

Suddenly, we heard the arrival of the Royal Heaven General Jun Lang (君狼- Gentleman Wolf) with a small troop of elite soldiers. He bowed in greeting, “Greetings to the Moon God, greetings to the Crown Prince Sun and Maiden Yue.”

“Subordinate is under orders from the Jade Emperor to bring your royal highness before him due to the sun eclipse’s this afternoon,” The Royal Heaven General continued bowing his head in deference to Xi Yang, “May Crown Prince Sun kindly follow us.”

Xi Yang’s eyes stayed with me, “If you go down and meet Hsiao tonight, don’t ever call me Xi Yang Ge Ge again. I am not your Xi Yang Ge Ge.”

With that, he gave a swift turn and walked out of the bedchambers. I did not even have the heart to call him back.

Uncle had passed me his special silver moon mirror so I could watch what happened to Hsiao on earth while I waited for the sun to fall and the moon to lit up. My heart soared for Hsiao when I heard his speech before his father.

Uncle called my name and I lifted my head up from the mirror, “Yue, it’s time. I will send you down. Only Hsiao will be able to see you. You will need to return by the break of dawn.” Uncle gave a tight squeeze to my right palm and before I knew it, I had arrived at the courtyard outside of Hsiao’s royal bedchambers.

The courtyard was silent except for two palace attendants outside Hsiao’s bedchambers. It was so silent that I could hear each and every thud of my heart clearly – what would Hsiao say? I suddenly wanted to laugh. What if this was only a foolish unrequited dream of mine? I clenched my fist, but this was my choice.

I closed my eyes, as I enjoyed the warm moonbeams fall on my face. Suddenly, I heard languid footsteps. The languorous swaying of a man deep in thought.

I raised my head and smiled, “Hsiao.”

I caught my breath, “Yue.” She was beautiful. She had always been beautiful. But, under the moonlight, in her shimmering white robes that seemed to be threaded out of moonbeams themselves, her fair face with her twinkling eyes that lit up when she saw you – it was as if her whole soul came to life at your call. I was entranced.

Before she could speak, I turned to the royal attendants guarding outside my bedchambers and ordered them to leave. They looked uncertain for a moment, but left quickly at a stern glance from me.

With their departure, I could hear Yue sucking in a deep breath of air behind my back.

I turned back and her cheeks flushed a deeper shade of red, “I have to say it now before you say another word. I don’t have much courage. Uncle always said that I was more ignorant than brave.” Yue paused, and I could tell she seemed to regret how she started, “But, I knew if I had the chance to see you again, the first thing I would say is 我喜欢你 (I like you). In fact, I don’t just like you, I really really really like you. We haven’t known each other for a long time. A blink of an eye in the lifetime of a god actually… as a probationary Moon Maiden, I prided myself on knowing what love is, but until I first felt it, I wasn’t sure. But, I’m sure if love exists, it would feel like what is in my heart.”

My heart twinged as I recalled Prince Sun’s words to not pull down Yue into my fate.

Yue looked at me in silent anticipation, half in horror and half in hope. I took a step back, “I like you too, Yue, but I only like you as a friend.”

I saw hurt flash through Yue’s eyes, but she quickly shook it off and stepped forward, “Are you pulling back because of what Xi Yang Ge Ge told you?”

She held out her right palm to me, “It’s true… perhaps what good is my love declaration since I have only half a red dot’s chance left of surviving. But, I refuse to bow down to so-called destiny or fate. I don’t care if we had some connection in our past lives. I don’t care who we were. I only care about what we have now and I choose you, Hsiao, I choose you.”

I cradled her right palm in both my hands as I saw the two black dots and half a red dot. I guessed that each dot must represent one of the three women of my fate. Why has the third dot already turned black halfway? Was it because the Premier’s daughter, An Chi (安池 - calm pond), the childhood sweetheart of Qing and I, was always said to be engaged to the Crown Prince?

“Hsiao,” I lifted up my head at Yue’s call, “My uncle will call me back when dawn breaks. I only have so much time left tonight. I don’t even know if I have a tomorrow. Hsiao, will you choose me?”

Yue looked at me with such clear determined eyes. I had so much to say to her in that moment – you saved my heart, Yue. You threw yourself into my life, pulled me into your rhythm, and you made me cared again. I had forgotten how painful it was to care.

Suddenly, under the moonlight, Yue seemed to grow translucent. My grip on Yue’s right palm tightened. A strong gush of cold wind blew past us and Yue’s body gave a slight tremor.

My body acted before I thought and I pulled Yue into my embrace.

Hsiao brought me to a secret garden that he had played in as a child. It had a big clear pond full of water lilies. We sat by the pond under the glow of the almost full moon.

We shared childhood stories and secrets we had never told another soul. We talked all night. Even when dawn broke, I did not want to leave.

I turned to Hsiao, and embarrassedly looked at my hands, “I need to ask you something, Hsiao.”

“Will you marry me?”

Hsiao’s eyes widened. I cringed inwardly, “I know this is a bit abrupt but Uncle suggested that if our feelings were mutual, we could marry in his temple tomorrow when it was the full moon and it could possibly change our fates.”

I quickly added, “I can understand if it’s too fast, after all, you are also the Crown Prince now and you have your childhood sweetheart and…”

Hsiao placed a finger at my mouth to stop me from speaking, “Yes, it’s too fast because you asked me first.”

For the first time, I saw that Hsiao’s cheeks had a tinge of pink, “I don’t even have a token now to ask for your hand in marriage. I wanted to follow the proper procedure and obtain the permission of your Uncle first…”

I laughed as I grabbed Hsiao’s hand, “Is that a yes?”

Hsiao pulled me up onto my feet. He then bowed down on one knee. With one hand on his chest and the other entwined with mine, he looked up to me, his eyes clear and steadfast, “Yue, I don’t know if you know this but the Emperor in the mortal realms is commonly said to have thousand of concubines. But, I, Hsiao, do not believe in that. I only have one heart. It was entombed, locked away, in the belief that I was carefree but I was merely in a suspended state of not caring.”

He placed my hand on his heart, “I did not know when I started caring for you. You stumbled into my heart and made it your own. Yue, if you do me the honour of becoming your husband, I promise to care for you until both our hairs turn white. Until the last dawn breaks in both our lives, I will love you to the very limits of my soul.”

“You ask me if this is yes,” Hsiao looked deep into my eyes, “Yue, this is my declaration that for you, it will never be no.”

*A favourite quote of mine from Shakespeare’s Midsummer Night’s Dream.