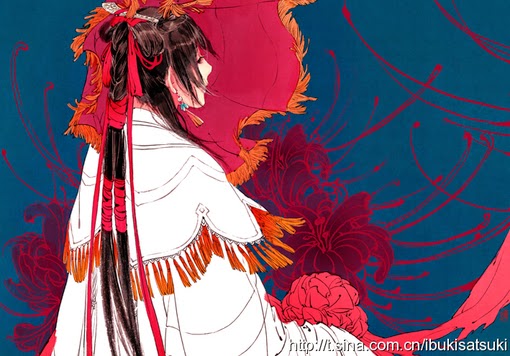 Yay! We have reached the final chapter. Trying to write my own little fiction has taught me how tough it must be to write a real novel (and how far away I am from such an endeavour). I'm very grateful for all the supportive and constructive feedback I have gained along the way. Now, I would like to wipe the sweat off my brow and return to being a simple translator (but don't worry, I won't forget about the epilogues!). Haha.

At the start, I thanked Hui'er, Moonblossom and Sherry. And at the end, I would like to also thank these readers who have given such great encouragement along the way. Honestly, without all you guys' support, my story would have been puttering to the finishing line. In order of chronology of comments: to the many anonymous commenters, fangorn, Kiyo, upside_down aka lemonsalt, sutekii, Elaine Teo, Redhazel, Sonia, bingu, Peachie, Lola, hanny, karma, macopaleaf, GalaxyAngel007, ginny hale, Hanisah Suria, hh, samie, uw_maulida, Escapism Fanatic, Yasmin, MissyMay, Riley Elizabeth, LittleDi, HannaH, Little Peach, cathy0430, atz, totoromalas, lalalolo, Marie St Claire, Kamila Hasbianti, aimey, anya, Unknown 2, She.ly, giginkanovels, super-latte and joannakuang. *gives little head bow*

Finally, I shared my little tale to one of my close personal friends and sister of my heart, R, yesterday and this morning, she shared with me a line of ancient poetry that reminded her of Hsiao, Yue and Xi Yang (in this very order). I can't help but marvel at the serendipity of it all, because it fitted perfectly with the ending I had planned to post this very morning. R, one of the real life fairytale princesses I know, thank you.

I hope all of you will enjoy this final chapter - I have always envisioned Little Moon as a little folk-tale/fable to read dreamily before bedtime. I will write an author's note after this to share the inspiration for the story :).


The silver-haired and silver-robed Moon God, the dark-haired and white-robed Hsiao, one stood in the rain, the droplets falling upon his face, one knelt down on the ground, the droplets tip-tapping on his back.

Finally, Hsiao lifted up his head at the full moon, and he stood up. Tall, upright and firm. The Moon God never forgot the strong glow in Hsiao’s eyes when Hsiao told him, “I am going to wait for Yue. No matter how long it takes.”

Hsiao placed one hand on the left of his chest, “I know that a part of her continues to live on in me.” The Moon God thought that he saw the other half of Yue’s divine heartstone sparkle out of Hsiao’s chest. Just for a moment.

And, just because of that belief, that one sparkling moment, the lover began his long unknowable wait.

But my dove, my perfect one, is unique:

She is her mother's only daughter;

She is the pure child of the one who bore her.

The maidens saw her and called her blessed,

The queens and concubines also, and they praised her, saying:

"Who is this,
arising like the dawn,
beautiful as the full moon, bright as the sun,
majestic as an army with banners billowing?"

The Yan Kingdom was moving into its greatest golden era. The Yan Royal Family was always enigmatic – but the citizens all applauded the crowning of the Second Prince Hsiao. Already at the young age of twelve, he was known to have literary, artistic and musical talents beyond his peers. His poems and paintings were rare but all that had the opportunity to observe them had called Hsiao – the young prodigy of their time. Little was known or heard about him after he turned sixteen, as the attention of the kingdom fell onto the First Prince Qing, whose military command and disciplined nature heralded a stronger Yan Kingdom.

Imagine the citizens’ surprise when concurrent to the Second Prince Hsiao’s crowning as the Crown Prince, the Emperor announced that the First Prince Qing had decided to retire from the world and take the monastic vow to become a monk. There were whispers of bad blood between the princes, and that this was merely a polite exit to what was in fact a political exile.

The early years after Crown Prince Hsiao’s crowning were turbulent – but quickly, he managed to win the support of both the Premier and military command of the royal army. Crown Prince Hsiao found an intellectual soulmate in the top imperial scholar, Gentleman Yunfeng from Zi Town, and received special military help from the great General Tie Shi of the Xue Mountains. Within two years, the Emperor decided to abdicate in favour of Crown Prince Hsiao, so he could watch the beginning of his son’s glorious reign. The Yan Kingdom almost came to war with the neighboring Wu Kingdom, but as if heavens were looking favourably on the new Yan Emperor, at the peak of their antagonism, a peace treaty was forged between the new Yan Emperor and the Wu Kingdom’s newly decreed Crown Prince. It was rumoured that it was the new Yan Emperor who had helped the Crown Prince of the Wu Kingdom rise above his other brothers… but the veracity of these rumours could never be verified.

And, neither kingdoms wanted to verify this rumour – for finally, after a long conflicted history, both kingdoms entered an age of harmonious peace. In fact, there were new legends already being born, more fascinating gossip being shared. Small towns started to spread that there was a handsome monk that resembled the Yan Emperor traveling through the Yan Kingdom – he was incredibly dashing, but what was most brilliant about him was the peaceful gaze in his eyes. Perhaps, the First Prince Qing had finally found a truth to set him free.

But, the greatest legend that was born was the tale of the lovelorn Yan Emperor. Year after year, he rejected all offers of princesses, beauties and concubines. Even when the Emperor of the Wu Kingdom had threatened to start a war and the only solution seemed to be a political alliance through marriage, the Yan Emperor had stood firm and rejected any possible engagement. The Yan Emperor had reportedly told the Emperor of the Wu Kingdom, “I have long vowed to only marry one. To ask me to marry another is to take away my will to live.”

Every year, on Chinese Valentine’s Day, the seventh lunar day of the seventh month, the Yan Emperor was said to stand all night in the Capital’s Temple of Matrimonial Bliss. Just standing, just waiting, below the full moon.

The Capital’s Temple of Matrimonial Bliss became hugely popular. All the young maidens prayed before the Moon God statue and a special jade bangle with a red thread tied around its golden clasp that was placed carefully next to the Moon God’s statue. The jade bangle was said to belong to a mythical red thread goddess (红线娘娘) and it was hugely effectively in granting prayers seeking a good marriage fate.

But no one could expect what would happen on the eighth year of the Yan Emperor’s reign. In that year, on the seventh day of the seventh month, on the day the Cow Herder re-united with the Weaving Goddess on a bridge made of crows, when night descended, there were two moons. The moons was full, shining so brightly that it seemed like the entire streets in the Capital was aglow, and next to the first glowing full moon was a twin moon, that looked like an evening sun without the orange rage.

The moons were so bright that most of the citizens could not look at it directly. But, the children of the Yan Kingdom, these young little ones with eyes so full of innocence that nothing could be hidden from their gaze – they had ran to their parents, crying that they saw a red wedding sedan fly down from the twin moons on a beautiful brown horse with wings!

He kicked the wedding sedan three times, and reached out his hand. A soft-silken hand returned his grasp and he gently helped the red bride out of the wedding sedan. Her head was bent downwards due to the weight from the grand red phoenix wedding crown on her head.

The evening wind blew the strings of golden beads falling across her face. He adjusted her face upwards towards his own face, “Yue.”

He repeated, “Yue Er” again as if he could not believe the words he was mouthing.

She smiled up at him, “Hsiao.”

There was no more Yan Emperor, only a man, a lover, called Hsiao. For a man known to have endless patience, he could no longer wait. He pulled Yue into his embrace.

Before Yue could answer, Hsiao swept away the strings of golden beads and kissed Yue fully on her lips. After a long while, Hsiao moved back and Yue looked at Hsiao with an embarrassed flush, “We haven’t gone through the rituals yet!”

Yue was thankful that the grand red phoenix wedding crown could hide her face, as Hsiao brought her into the temple, towards the altar. They first bowed towards the heavens, and Yue winked at the Moon God. Then, they bowed towards Hsiao’s parents, for the grand Yan Emperor and Yan Empress were sitting inside the temple halls waiting for this mystical bride.

After that, they bowed towards each other, now husband and wife.

Yue laughed gleefully when she saw a red thread connect between Hsiao and her heart. It was the most beautiful red thread she had ever seen, the pure red of their marriage robes, a happy prosperous red. Most of all, it sparkled like it captured the glow of the stars and the moon. She knew what Uncle had told her when she had awoke in Heavens was true – she was finally a mortal, but a mortal who could still see red threads! Her fate was now forever entwined with Hsiao, this one red thread will be both their beginnings and ends.

The whole Yan Kingdom was in huge euphoria at the news that the Yan Emperor had married his Yan Empress. The citizens cried with glee that the Yan Emperor’s love had moved the Heavens and that their prayers had worked. Still, no one really knew how the Yan Empress had arrived. Was it because Hsiao had fulfilled his fate as a great Emperor? Or if Heavens had really been moved… no one could be sure. Only that one day, the red thread with the jade bangle had appeared before the Moon God in his divine Temple of Matrimonial Bliss in Heaven, when he grabbed it, it burned once again like the nirvana fire at San Yue’s death, and Yue had re-appeared before his eyes… just like how she had disappeared.

There were no more dots on Yue’s right palm, but she had said later that she felt these dots in her heart. An eternal reminder that love may be forever, but time was not. Just as the Yan Emperor was greatly loved by the citizens, the Yan Empress was worshipped by the citizens as the red thread goddess, a bride from Heaven. Some even said that the greatness of the Yan Kingdom was not because of the Yan Emperor, but the extremely efficient matchmaking by the Yan Empress.

Still, when the Yan Empress was asked who was her most successful matchmaking case. She would always smile and say, “Me.” 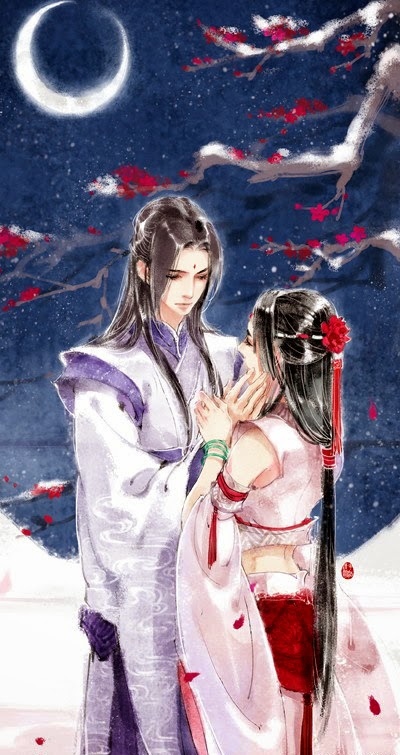 
For the accompanying story (sequel):