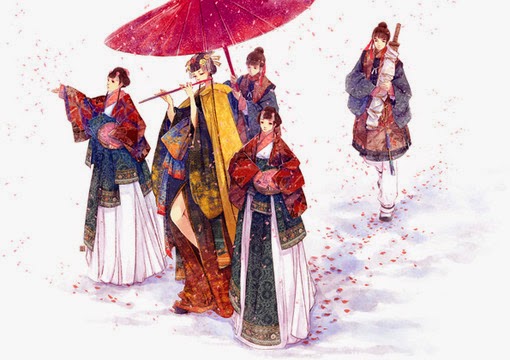 
Chapter 14: A Bug Eating Through The Heart (Part 3 of 4)
The little sky soldier's mouth sunk and his eyes looked like he was about to cry.

Master Pu Chi raised his brow and turned to asked me, "Beauty, how do you know Night likes you?"

"Naturally it's because he said so," I said honestly.

"Pu Chi!" Master Pu Chi laughed, "Jin Mi, you are so naive, a person saying 'I like you' is the same as a woman saying 'I hate you'. You cannot believe it! Love is a deep and profound thing, the essence of which is six words - 'Words Do Not Match The Heart'."

"Then how does one tell if this 'like' is genuine?" The little sky soldier asked curiously, he even sat down on the stone step to listen. The Nightmare deer rubbed the end of my robes and gently leaned at the side of my feet, it looked with glistening eyes at Master Pu Chi.

Master Pu Chi was the moon being worshipped by all these stars, he started to lecture with a profound expression, "If a person genuinely likes you, he will often look at you in a daze, for example, just like how I gazed at Jin Mi just now." Master Pu Chi looked at me with an intoxicated gaze, until I trembled.

"If a person genuinely likes you, he will not throw his temper at you, for example, just like how I dote on Jin Mi. If a person genuinely likes you, he will be happier than you when you are happy, he will cajole you to be happy when you are upset, his heart will ache for you more than your own heart, he will know how to take care of you better than you can yourself. For example, Jin Mi's toes are swollen, my whole body aches as if it has been stomped upon, "Master Pu Chi suddenly held my toes and rubbed them, there was a slight heat from his palms which must have been his own powers. With this one rub, I indeed felt better.

But Master Pu Chi's expression which was like a little dog looking at a meat bone when he held my feet was a little too scary, so I trembled and kept my naked feet into my silk shoes. Master Pu Chi reluctantly let go and said, "Actually, besides me, everyone in this world like what they can never get." Master Pu Chi gave me a grand smile, "For example..."

I turned my head, the two sky soldiers guarding the Northern Sky Gate both bowed holding a respectful fist towards a tall distinguished figure. The person shone in his grand robes and had ten guardsmen standing behind him. If it wasn't Phoenix, who else could it be? Under his proud brows, his clear eyes were looking towards here.

Phoenix must have brought his soldiers to survey the heaven gates, I gave him a friendly smile. He did not say a word, his gaze was like the grasshopper skipping across the water, but it became sharp when he looked at Master Pu Chi.

"If I did not remember wrongly, Gentleman Yan You disdains the heavenly realm and does not come here. For what purpose, have you come so often recently?"

"Yan You naturally has come for a beauty," Master Pu Chi again gazed at me as if I was a meat bone.

The sword at Phoenix's waist swayed in the wind, "Gentleman Yan You has a long list of antecedents, the heavenly rules that you have broken are more than one could count. Unless, you are planning to achieve new heights by committing a greater crime such as intruding into the heavenly realm?"

As if he was stabbed, Master Pu Chi's face turned green.

Coincidentally at this time, another entourage arrived outside the Northern Sky Gate. Leading this entourage was the head of the bird tribe, Sui He. With rich accessories and magnificent robes, a dazzling colourful group of bird immortals followed behind her. Princess Sui He gave a faint smile as she drew near, her face grew stiff at the sight of Master Pu Chi, and there seemed to be some sense of unease. She quickly steadied her expression as she spoke to Phoenix, "How coincidental. Auntie called to speak to me and I had planned to visit your palace after greeting the Heavenly Empress, who knew that I would meet Phoenix surveying the heaven gates."

Phoenix gave her a warm smile, "Since it is so rare for Sui He to come to the heavenly realms, why don't you stay a few more days before you leave."

I suddenly felt that the amount of people outside the Northern Sky Gates was a bit ridiculous. As I was about to ask Master Pu Chi if he wanted to follow me to Night's palace to have a cup of tea, Phoenix suddenly turned his head and asked, "Are you under Night?"

The little sky soldier held up his fists respectfully and said, "Subordinate is indeed under Night."

"Since you are under the Night Deity, now that it is deep in the night why are you not on night duty?" Phoenix has always been cold-blooded when it came to disciplining soldiers and this was no exception.

"His Night Highness once said that one can rest while working..." The little sky soldier was usually honest and without fear, but under Phoenix's intimidating gaze, his voice started to stammer and he suddenly said, "Subordinate will go on night duty!" He straightened up his waist, held the red-tasseled spear and quickly left.

Princess Sui He gazed at the back of the little sky soldier and smiled, "Phoenix clearly knows that she* comes from Tai Si Immortal, so why do you trouble her. Sometimes it is good to follow the flow of the water and be accommodating." So it turns out that this little sky soldier had a big mountain protecting him, no wonder he could be so hard-headed. But, Princess Sui He is also not simple, she actually dare to disagree with Phoenix regarding how to discipline his soldiers. Indeed, it was like how the Heavenly Empress had described Princess Sui He as an excellent combination to Phoenix (see chapter 9.5).

"Since one has joined the army, one must follow the army rules. However, Sui He's suggestion will be something I consider," Phoenix has made clear his stand but he gallantly gave face to the princess.

Princess Sui He satisfiedly placed her hands together and turned to me, "This immortal who I have seen once before at the Heavenly Empress' Banquet - you must be the daughter that the Water God has regained?"

"Yes," I gave a friendly nod. Master Pu Chi, who was by my side, had stayed silent. It suddenly occurred to me how rare it was for him to be quiet for such a long time.

Princess Sui He intimately pulled one of my hand and said, "I have always known that Night has a marriage agreement with the Water God's oldest daughter. Although everything has always been set, there was always the most important element lacking. Now that Jin Mi is back, and you are also the Flower God's daughter, this is truly an occasion where all the flowers are blooming! May Sui He ask when will the wedding be? Please don't forget me for the big event," Although Princess Sui He was speaking to me, I did not know why her gaze had lightly moved towards Phoenix.

"The wedding will likely be soon," Because I had once caused the bird tribe to unfairly suffer hunger, I felt a little guilty and did not mind throwing a banquet to feed them.


*The feminine pronoun for "you" is actually used here. Hmm, so perhaps the little sky soldier could be a female?

Comment: To be honest, Dian Xian repeats this formula often - Jin Mi does her own hilarious thing, her beauty attracts various side male characters, Phoenix enters and he is out to exterminate all rival men. It's trite, but addictive, isn't it?

As Jin Mi and Night's wedding starts to arrive, what will our poor Phoenix do? Is the bug eating through Jin Mi or Phoenix's heart? From what we know of Phoenix, he definitely won't just sit back and......
Posted by Decembi at 08:00