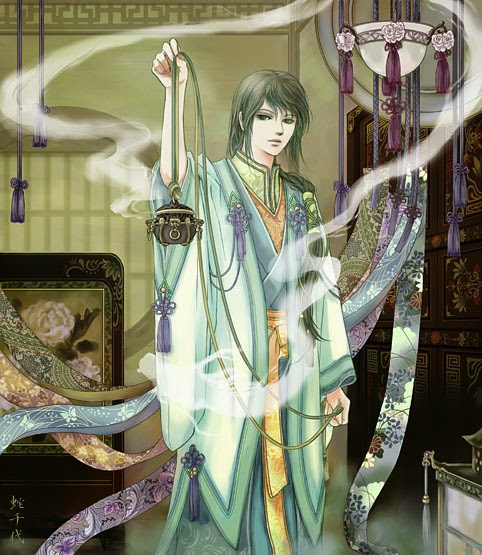 I have to confess that I doubt I translated a lot of the Buddhist sayings correctly, so I went for meaning more than anything. In this chapter, the Water God shows us the meaning of true love.

Father suddenly staggered back and lifted up his head in alarm.

I paused in contemplation, who knew that Grandfather Buddha will also have a bit of temper from being just woken up at his age. Immediately when he opened his mouth, he said such ominous things, I couldn't help giving a cold shiver.

"Is a huge trial going to befall Jin Mi? I seek guidance from the Buddha, " Father's usually calm and steady voice was suddenly hurried and full of ripples, "Buddha is merciful and compassionate, willing to save all life on earth. Luo Lin makes the bold request for the Buddha to save my daughter's life!"

Father replied without any hesitation, "Save!"

Grandfather Buddha gave a peaceful smile, "If the tiger recovers and returns to the mountain, it will catch the deers and rabbits for food. The Water God may save one life but harm hundreds. You may be compassionate but harm hundreds of other lives."

I selfishly thought that it wasn't fair for Grandfather Buddha to compare a grape stem with a fierce tiger. Father must have thought the same and said, "Jin Mi is pure and kind, she does not know anything of this world and will not harm others. May the Buddha check carefully." After he finished, Father took out the scripture he always carried on his body, he placed his right palm on it and seriously declared, "As the protector of the six worlds, I solemnly swear on the Golden Buddha Attendants Scripture. I earnestly seek help from Buddha to help Jin Mi overcome this trial, Luo Lin will repay this debt four times over, and is willing to suffer three lifetimes of hardship."

Grandfather Buddha swiped his hand over the mirror, the reflection started to ripple and I realised that this was not a mirror but a calm pond of sacred water. The dot of water on Grandfather Buddha's finger immediately became the burnt trace of a fragrant incense, he placed it on my palm and gently pressed my hands together, he gave a slight smile, "Worry comes from love, fear comes from love, if one moves away from love, one is without worry or fear. May this scented trace help you overcome your trial."

I earnestly gazed at Grandfather Buddha and asked, "How about the seal? Can you conveniently also release it?

Grandfather Buddha smiled but did not speak, he waved his hand and in a moment, everything changed and the stars moved, the surrounding scenery transformed. Father and I were suddenly standing outside the Northern Sky Gates. Father gave a deep bow towards the west, "Many thanks to the Great Buddha." Daddy turned back to me, his gaze full of sadness and worry, he must have treated what Grandfather Buddha said seriously, but I was indifferent.

During the night, Father went down to the mortal world to release the rain. I stood by the Northern Sky Gate in deep thought, I was a little frustrated, we had travelled and rushed all the way to the Western Skies but we had returned with nothing. I even received a curse that I would die soon, I really felt it was not worth it. The more I thought, the more the tip of my toes hurt, I looked down and realise that the little sika deer's two front paws were on my toes and looking at me with pitiful beady eyes. It had an extremely innocent look.

This little creature is quite loyal, when I returned, it immediately found me, except it needed some training for how it should welcome me. With some effort, I finally managed to shift its iron paws off my feet. I removed my shoes and socks and realised the tips of my feet were bruised. I took in a deep breath of cold air, and decided to sit on the stone steps of the Northern Sky Gate to massage my feet.

There were two sky soldiers guarding the door and their faces immediately turned red when they saw I was looking at them. They immediately raised their head towards the sky. I couldn't understand so I also lifted up my head to see what they were looking at so seriously. After gazing for a while, there was only a dark cloud at the left. I did not know the citizens in the Heavenly Realm were so pure such that two sky soldiers can gaze at a cloud and become so shy and awkward, as if they were a precious unmarried maiden from a rich family.

I kept my gaze and chanted some magic as I lowered my head and massaged my feet. I suddenly felt something strange on the top of my head and lifted up to look, but I found a wide-eyed little sky soldier holding a red tasseled spear curiously looking at me. Seeing me lift my head, his white clean face became a little embarrassed so I gave him a friendly smile.

He awkwardly returned a smile, blinked his eyes, and looked at me tentatively as if he was a small deer, "Are you that Immortal Jin Mi?"

I seriously reflected and then asked him, "I'm not sure what my immortal friend mean about 'that'?" I couldn't rule out the possibility that there was someone with the same name as me in the Heavenly Realms and it was best not to have a misunderstanding.

"The Jin Mi Immortal who has a marriage engagement with his First Highness Night," After saying this finished, the little sky soldier's eyes darkened, and I suddenly found him familiar.

"If that is so, then I am that Jin Mi," I readily answered.

Receiving my response, the little sky soldier gave a depressed sigh, his elegant brows furrowed together in deep thought over some unknown matter. Suddenly his expression turned solemn and respectful and he formally asked, "May I seek your knowledge about something?"

For the first time in my life, someone sought guidance from me, I agreed with satisfaction.

The little sky soldier ruminated for a while then asked stutteringly, "My father said that a man can have three wives and four concubines, after his First Highness Night marries you... after he marries you, can he marry other gods?"

Ah... this troubled me, I had never studied the rules of the Heavenly Realms, it is best not to misguide this small disciple, as I was prepared to give some blur answer to cover over it, I suddenly heard a leisured voice help me to answer, "Naturally he can."

I turned around and saw the green greasy Master Pu Chi had appeared behind me from who knows where. He was gazing at me meaningfully and then looked at my bare feet, "Just like how even after Jin Er (affectionate way of saying Jin Mi) marries the Night God who hangs the stars, she can still mutually cultivate with me. Speaking of which," Master Pu Chi suddenly dejectedly lifted up his head and almost knocked my chin, "Why only after a few days you are now in the hands of the Night God? Won't you give me a chance?"

The little sky soldier must not have my wide experience and calmness in dealing with all situations, he was surprised by the green Pu Chi who suddenly appeared and moved back two steps. Hearing what Master Pu Chi had said, he then hurriedly leaned closer two steps and asked, "Is what this immortal friend saying true? His First Highness Night can really marry again?"

Master Pu Chi gave a coquettish smile to the little sky soldier and said seriously, "Naturally it is true."

The little sky soldier turned slightly red from Master Pu Chi's smile, "That's great!" As if something that was previously undecided had finally settled, he happily clapped his hand. But who knew with that clap that the red tasseled spear which was originally in his hand would land on the floor.

With the "pi la" sound from the dropping of the spear, my heart suddenly became as bright as Grandfather Buddha's mirror, did the little sky soldier fall for Night?

The little sky soldier slowly picked up the spear and gave me an awkward smile, "If His First Highness remarries, will Jin Mi Immortal mind?"

I quickly waved my hand and answered, "No! That is Night God's matter, naturally I will not mind!"

The little sky soldier was dazed, after a while, he clumsily asked, "Does Jin Mi immortal know what kind of immortal his First Highness Night likes?"

This little sky soldier truly had a lot of questions. Speaking of which, I could only remember that Night said he liked me, but I did not know what other types of immortals or gods he liked. So I simply answered, "He must like immortals like me."


Comments: I haven't been translating for a while and I must admit that I feel rather rusty. A short break and it has taken me much longer than usual to translate! This chapter is a good indication of Jin Mi's real feelings, but too bad no one knows how she really thinks except perhaps... Grandfather Buddha and us? Will Jin Mi heed the warning to be beware of Love?
Posted by Decembi at 08:00