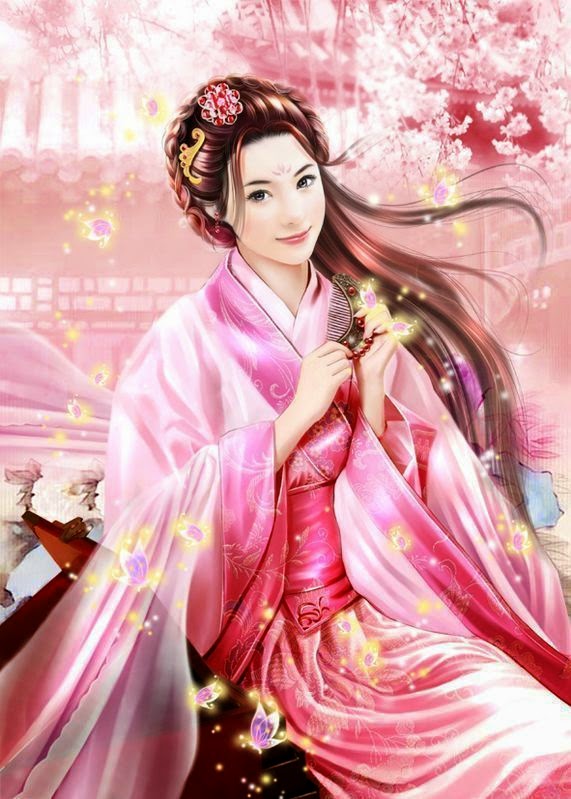 I thought this was a good picture to capture Jin Mi - instead of a white robed fragile frost flower beauty, she's more likely to be a strong feisty burst of colour!

In the Big Thunder Temple, the eighteen golden arhats were either sitting, lying down or standing tall, they were arranged on the left and the right sides of the temple, in the middle was an incense burner which was burning one scent, the light twirls of smoke slowly emanated a beautiful smell that slowly disappeared in the chanting.

With both of my hands respectfully pressed together, I followed father into the main hall of the temple. Under the stern gaze of the shining arhats, I surveyed for a while, became disinterested and returned my gaze to the main hall.

On top of the lofty and majestic rectangular stone pedestal, there were three figures each sitting cross-legged on a lotus flower, they must be the Three Lifetimes Buddha, that transversed the past, present and future. Father's both hands were respectfully pressed together as he bent down his head and chanted, the Three Lifetimes Buddha lightly nodded their heads towards father, the Buddha in the middle with benevolent brows and kind eyes spoke, "Today is not a day where we open to the public to discuss the religious scriptures, why has the Water God come today?"

"Luo Lin has rashly came today to seek the Ru Lai Holy Buddha to release the Jia Lan seal, " Father's voice was like the spring water, slowly flowing, it was neither hasty nor slow.

"Is this for Zi Fen's daughter who is behind you?" The Buddha on the left looked at me, his holy gaze revealed light sympathy. Truly they were the Past, Present and Future Buddha, in one glance they can ascertain my origins.

"Indeed," Father moved away to reveal my face, "I plead for the three great ones to allow us a meeting with the great Buddha."

On the right, the future Buddha lightly looked at me, his calm demeanour slowly revealed faint ripples, his brows furrowed and he closed his eyes, he gave out a soft sigh.

Seeing this, Father's body tightened, "May I ask why the great one is sighing?"

Father turned to look at me, his gaze held worry. My heart skipped, the Future Buddha did not know the past, but his eyes could see the future, seeing his description, my future must not be bright, could it be that I won't be able to cultivate into a god? Thinking of this, I couldn't help being depressed.

"The door is always open, but the journey of the Water God will be fruitless, it will have no effect," The Future Buddha waved his hand, the door behind opened, behind it were many routes, the stars in the sky were arranged like the chess pieces and bedazzled one's eyes. However, in this moment, an unremarkable path of lilies started to lit up, one could not see the end, it was truly, one did not know how deep the clouds were, but this was the way to the Buddha, "The water lilies can lead the way for the Water God, one must be careful not to get lost or the ghosts will trap you and sink you to hell, I can only say up to here, Amitabha."

Father pressed his hands together respectfully and chanted thanks to the Three Lifetimes Buddha, he took my hand and led me on the small path towards Buddha Grandfather. All the other paths were filled with flower scent, flat and wide, only this route of mud was extremely uneven, curved and hard to walk. One of my feet would sink in the mud, the other would tread over the mud as we walked on this trench-filled road. I thought about what was said - "fruitless", fruitless? Unless the Future Buddha has predicted that Ru Lai Grandfather will not release my seal? If my seal is not released, my divine energy cannot improve, if my divine energy cannot improve, I definitely cannot become a god, if I cannot become a god, I was destined to be looked down upon by all the great gods, for example Phoenix, ah such a fate was truly depressing...

One's life as a sprite is not tragic, what is tragic is that even at death one is still a sprite.

I was seriously considering this issue, when suddenly something fell onto the ground, it dropped between Father and me, it even shook three times, I almost fell down because of this but stabilised by pressing on the thing.

Upon closer examining, I realised what I was holding on to was someone's big stomach. I always thought that no one in the realms can win Old Carrot Immortal's round stomach, but after this comparison, I finally understood the meaning of the saying "The Prime Minister's Stomach Can Hold a Boat"*, this meaty stomach was trembling up and down, it rippled waves after waves upon its three layers of fat, I loosened my hand and praised, "Good stomach, good stomach!"

*It basically means someone is very generous and tolerant and can withstand great matters. But Jin Mi has understood it as literally, someone's stomach is big enough to support a boat! Hahaha.

"Not bad not bad, from far I had seen this young female doll's looks were pleasant, on closer look, she not only looks bright, her eyes are also very good," This round and fat monk must be very scared of tickles, he started to laugh for about the timing of one pot of tea, after he finally laughed finished, he gazed at me up and down, waved his palm leaf fan and said, "This little doll has a thread of intelligence and affinity with the Buddha, why don't she follow me on the road to Buddha hood!"

Hearing of this, somehow it sounded like "why don't she follow me", so I felt some sense of closeness (see chapter 8.1 for why Jin Mi likes this).

"Little God Luo Lin greets the Mi Le Buddha," Father who was in front had long turned back.

Who would have thought this round monk was the Mi Le Buddha, but seeing how he used his fan to hit Father's shoulders, "Ah ya ya, isn't this little Luo Lin! We haven't met for a few years."

Father gave a graceful smile, "We have not met for ten thousands of years, Luo Lin do not dare to say I am old but also don't dare to say I am small, this is my daughter Jin Mi, if she was rude to the great one, please forgive her."

"I was wondering whose family this doll belonged to and it turns out she's yours! The father is handsome and the mother is beautiful, no wonder she was born so good looking. Such a good bud must quickly follow Buddha hood!" Mi Le Buddha waved his round palm leaf fan, and earnestly told me, "Entering the door of buddha hood will eliminate all disasters and avoid all evils, it will guarantee your safety, grand lodgings, no problems with food, everything will go well! Little Maiden, I'm sure your heart is moved! If your heart is moved, then quickly greet me as your teacher!"

Father lowered his head and laughed, he said to Mi Le Buddha, "It's an honour the great one so looks upon Jin Mi, but unfortunately Jin Mi has a marriage agreement, and this will break a taboo of Buddha hood, I'm afraid she will have to miss out on your good intentions."

Hearing this, Mi Le Buddha continuously shook his head, there were faint wrinkles in between his brows, "A pity, a pity, which lucky little god is to be her match?"

"Night," Father said in a light and easy manner.

"Oh that lonely little god who is always leading the deers to survey the evening skies?" Mi Le Buddha placed his hand on his stomach and fell into deep thought, without waiting for Father to answer he turned his head to me and murmured, "If you really could marry him that would good, but I'm afraid..." It seemed like he was talking to me, but it also seemed like he was murmuring to himself.

"The sky is turning dark, Luo Lin is seeking an audience with his Ru Lai Holy Buddha, I must bid farewell, maybe next time I will go greet the great one at his temple," Father lifted up his head, saw the seven coloured rainbow fading from the sky and bade farewell to the Mi Le Buddha.

Mi Le Buddha brushed his robes and replied, "That is fine, that is fine."

Father led me forward on the road, but I could hear softly Mi Le Buddha sighing behind, "A pity a pity, I wanted to help you overcome your trial." When I wanted to hear this more carefully, there was no more sound, not even the sound of any insects much less a human voice, it must have been an illusion of mine.

The road started to widen, and in front there was a thick luxuriant forest, I looked closer and realised it was the Bodhi Sacred Tree.

Under the tree, Ru Lai Grandfather was lying in its dense shade, his eyes were close as if he was taking a short rest. In front of him was a mirror, it reflected the golden blaze of the setting day, so shining that one did not dare to look at it closer, I turned away my eyes and saw there was a lily sleeping soundly in the mirror, it was calm and elegant, but it lacked one flower petal, which in its beauty made it appear all the more lacking.

"Luo Lin greets the Buddha," Father pressed both of his palms respectfully and gave a deep bow to Grandfather Buddha. I followed Father's example and bowed down, "Jin Mi greets the Buddha."

"Buddha is all knowing and must have known why Luo Lin is here today, I don't know if you are able to help?" Father respectfully cast down his eyes and only looked at his nose tip.

Grandfather Buddha sat on cross-legged, both of his hands were placed on the knees, in a peaceful voice that loved and pitied all that lived in the realms, he said, "Someone that is about to die, there is no difference in releasing or not releasing the Jia Lan seal."

Comments: Personally, I'm buddhist as well, and there is great respect for the Buddha. I think you can note a clearly respectful tone from Dian Xian towards the Buddha, even though she is not above putting in a few cute jokes, which is very different from how she treats the other gods in the pantheon of chinese mythology such as the Jade Emperor.

Even in chinese mythology, there are gods you can joke about and have creative licence, and there are gods that one still takes upon a reverent tone.

Personally, I really enjoyed this part and who laughed when Water God, who everyone treats as great, is called Little Luo Lin? :)
Posted by Decembi at 08:00