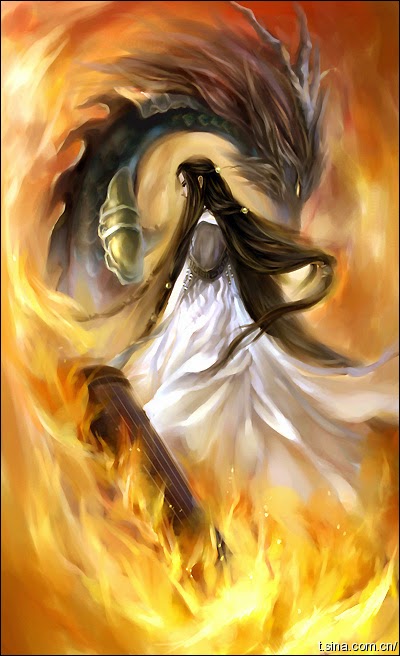 I have heard everyone's cries for MORE Heavy Sweetness. I guess because the plot is really exciting now, everyone would love the story to go full speed ahead? I've been largely sick for the month of May, so I have not been able to translate as much as I wanted to.

Hopefully, June will be a better month for me. Let's watch Phoenix and Night battle - whom would you say wins this round?

Chapter 13: Once So Close, Now Walking The Path of Strangers (Part 2 of 2)

It was at the peak of noon and the sun rays were especially hot and blistering, but Phoenix wordlessly lifted his head and gazed at the glaring sunlight for a long while, it made me worried that if he continued to look on he would blind himself.

I stood with him for the length of the burning of one scent until I could no longer tolerate and spoke, "Actually, the sun that is setting on the mountain is much nicer to look at, it's bright and yellow like a salted egg, if Phoenix likes to watch the sun, why don't you watch it again in the evening?"

Phoenix seemed to regain consciousness and turned his gaze on me, the sun rays must have been especially poisonous and fierce, one could see blood threads in Phoenix's eyes as he gazed at me. When he was watching the sun, he didn't even narrow his eyes, but now he narrowed his long coquettish eyes, as if I was even more uncomfortable than the blistering sun rays, "It turns out that you will also care for me."

I brushed the short hairs behind the little Nightmare beast's neck and muttered in reply, "Of course! Phoenix and I will soon be relatives, even though we are not family yet, we can be considered half a family, it's natural to care for each other."

Later, if I marry Night, I will be Phoenix's sister-in-law, in fact I would be more senior than him, I heard the mortals saying that an older sister-in-law is like a mother, so I naturally wanted to give out a loving senior's aura. To care for one's younger uncle will start from small matters like this.

"One family...?" Phoenix repeated what I said, although there was no wind, his robes flicked upwards, suddenly, he laughed, his voice was so clear and light that his words were like transparent glass that could easily shatter, "Jin Mi, you truly know how to completely destroy me."

Truly, this little Uncle, Phoenix was not easy to please. I reflected that I did not say anything wrong, so why did he accuse me of destroying him?

Phoenix cast his eyes down at the nightmare beast, his porcelain eyes were so black that it seemed like water was about to drip out. This nightmare beast could not beat me, it has never been gazed at by this strong aura of Phoenix, its back suddenly became anxious and it timidly moved back a few steps.

"One family... whose family? You and him? He is even willing to give you a nightmare beast... You and me were never a family, last time we weren't, now we aren't, in future, even more we wouldn't be," Phoenix quickly turned his back at me, the seductive sun subsumed his lonely back into its warm embrace, "But, I don't blame you, I only blame myself, from the start to now, it was only my fault, my lone monologue. When have you ever given me half a thread of desire?"
Phoenix lifted up his head and gave a mocking laugh, "It was only my one-sided feelings..."

I took a step forward, the sun shone my shadow onto his back, it made it appear like we were leaning towards each other. From the back, I took his hand, Phoenix's whole body shook.

I stroke the lines in his palm and said lightly, "I do not know why you are not happy, and I do not know why you do not want to be a family with me. But, I know, actually we could be considered as enemies, but when will a revenge end? It is better if we become a family and end the hatred. A peaceful life is the best." Phoenix's unwillingness to become a family with me must stem from the fact that the enmity between his father and my mother can never be untied, so I decided to be benevolent and release him.

Phoenix suddenly turned around and my shadow for no reason fell into his embrace, "What did you say? Enemies? What do you know of?"

Observing Phoenix's unstable expression, I concluded, "Life itself has no worries, but if you persist towards a dead end, it is the foolish creating its own worries."

Phoenix's brows arched and he grabbed both of my hands into his hands, "Who told you that the Heavenly Empress killed the Flower God!" His stern aura pressured over me.

So it turns out my sense that Phoenix was a little weak previously was a wrong impression, only two or three lines of speech and his intimidating and demanding aura has revived.

With a suspicious glance, Phoenix went closer to me, he said in a low voice, "Did the twenty four flower leaders say this? But where's the evidence? No wonder the Water God appeared like he had something to say yesterday..."

Phoenix's brows furrowed and he lowered his head in deep thought, he seemed concerned and worried, but when he raised his head again, his composure returned, "Have you ever raised this matter with anyone?"

"Never," I shook my head, in the realms how many people could be as generous as us fruits? I knew at least this much, but even I did not know why I had spoken about this to Phoenix today.

"You must remember not to reveal this! Also, never be alone with the Heavenly Empress!" Both of Phoenix's hands grabbed my shoulders, his handsome face was only a few inches away from me, his deep dark pupils were filled with my own gaze.

"Yes," I seriously nodded my head.

Although he received my assurance, Phoenix did not let me go. The palms that grabbed me actually tightened instead of loosening, his eyes seemed to have a whirlpool like poisonous worms that twirled stronger and stronger, as if it was going to swallow him whole, the more he leaned the closer he became, so close that his nose grazed my own nose tip. In this moment, I didn't know where the warm saliva in my mouth suddenly came from, looking at Phoenix's moist and full lips, I suddenly felt a little thirsty, so I naturally stuck out my tongue and licked my lips.

A sudden new light burst from Phoenix's eyes, just as he was about to press onto my lips, he closed his eyes, his cheeks brushed my face and he let out a breath of heavy air next to my ears, the illusion was broken with this sound. Phoenix let go of both my shoulders.

The nightmare beast at my feet suddenly stood up, his gaze was full of joy, he happily swished his little tail. I watched as Phoenix's face started to lose colour, I reached out my hand to touch his forehead, it was hot for no reason, "Unless, Phoenix is sick?"

"Jin Mi," Someone called for me gently from behind.

I turned back, in the midst of the willows, Night was walking towards me, his clear composure distinguished himself from the willow mist. I smiled at him. Night walked towards me and his shoulder stood by my shoulder, his long hand took my own hand in a speed that was neither hasty nor slow. He held it tight.

The ends of Phoenix's eyes flickered, his eyes narrowed as he watched Night.

"Jin Mi, have you eaten lunch?" Night reached out his hands to brush my hair, he took down some willow catkin that had fallen onto my hair unknowingly.

"Not yet," I had woken up late in the morning and had left in a hurry, I didn't even have a chance to eat breakfast. I didn't realised it was time for lunch but now that he had brought it up, my stomach felt hungry.

Night lowered his head and squeezed my palm, he said, "You shouldn't be so careless next time."

Phoenix's lips were coldly pressed towards each other, "To use an 'empty stomach' to express 'what is inside your stomach'*, who knew that his First Highness' heart will warm up so suddenly."

Night calmly lifted up his head, "What does the Fire God mean? I do not understand." He turned to me and said, "The Water God came to find Jin Mi just now, it must be an urgent matter. Why don't I accompany Jin Mi back to Luo Xiang Manor? Let's not worry the Water God."

I did not know why father was finding me, so I naturally replied, "That sounds good."

"So, we will leave you," Night lightly nodded to Phoenix and pulled me away by my hand, before even walking two steps, Night suddenly stopped and said without turning his head, "In the last hundred years, Jin Mi had learned a lot of heart meditation techniques from the Fire God, both of you can be considered to be master and disciple, but in future Jin Mi will enter the Four Stars Palace and you will be uncle and sister-in-law. No matter master or disciple, uncle or sister-in-law, there are proprieties and levels of seniority to be respected, may his Second Highness remember this in his words and actions."

After saying this, he led me away.

When I turned back, the willow catkin flew around in the air, and Phoenix's figure slowly became unclear. 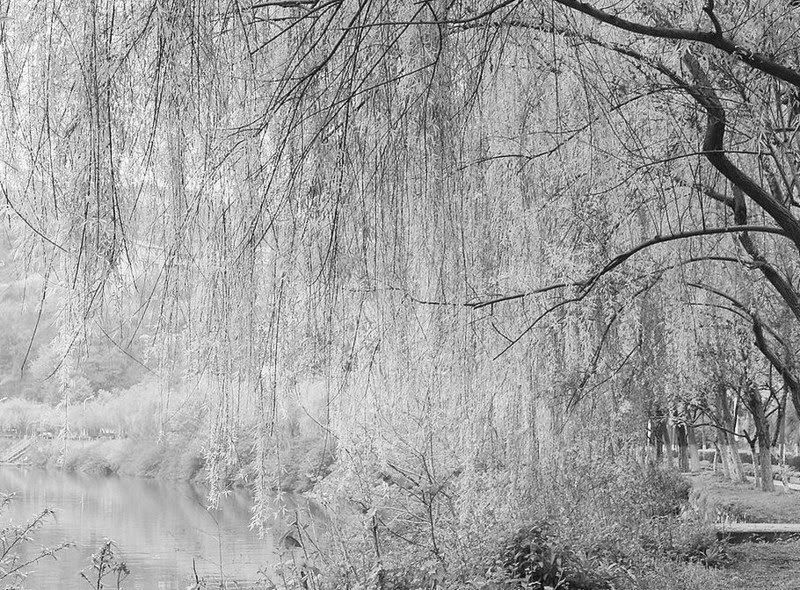 *There's a word pun here, both playing on the word for stomach. Basically, Phoenix is mocking at how Night is using concern for Jin Mi's stomach to express the words in his heart, and how the usually cold Night can suddenly show such concern.

Is Night giving Jin Mi the nightmare beast as a token of his love or a spy because he cannot trust her? Is it sad that I think it's a bit of both?

Comments: I thought Chapter 13 was a wonderful chapter with Night changing and asserting himself, while Phoenix is grappling with all his emotions and the difficulties he face in pursuing Jin Mi. You were once my sister, and now you are going to be my sister-in-law?

I cannot help agreeing when Phoenix said to Jin Mi, "Jin Mi, you truly know how to completely destroy me."