Question: What is the similarity between "Gentleman Free-Floating Cloud" and "The Devil Wears Prada"? 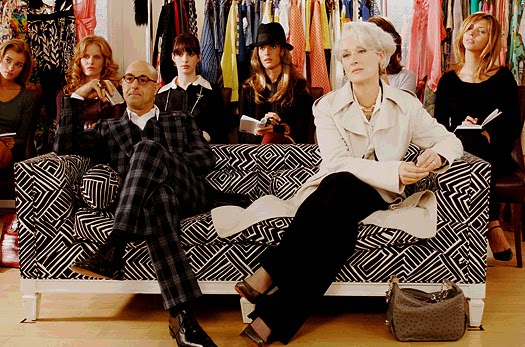 Answer: The editors not only write about fashion, they create fashion without being obvious about it.

For a wuxia story, Gentleman Free-Floating Cloud has a very modern underlying-theme.  Our heroine finally figured out why she was called "Fairy No Wave" and in true Wang Yun fashion, she got around the idea before you have time to say "soy-sauce fried chicken".  How can you not admire such a flexible girl?  If she exist in the modern world, I think she will survive very well in any corporate organisation. : )

“Gentleman, can we get down from the horse carriage yet?”  Little Brother Jiang was very excited to attend his first ever wedding party at Deng manor.

“Are we here already?  You can get off first and look for Fifth Gentleman.”

Little Brother Jiang nodded and hopped off the carriage while Xian Yun waited patiently for Wu Bo to wake up.  After a while, she stretched lazily and remarked: “This is my first time attending a jianghu wedding.” She has been awake for some, just that she was too lazy to sit up.

“It is the same as any other wedding, except that the guests are more casual.” Smiling, he held her at the waist and helped her down.  The scene was reminiscent of the past when she was also in a carriage, as he eyed her healthy movements covertly.  The main difference between then and now was that she has to be carried out in the past, compared to being able to get down off the carriage now under her own steam.

She crocked her head to one side and took in the crowded scene before her.  She wore a white dress tied at the waist with a short belt which fell to her knees. “Xian Yun, the one whom Deng Hai Tang likes is you.  What a pity that such a pretty Fairy has been snatched away!”

He gave her a bland look lined with mirth. “Du San Long is quite a good catch.”

“Hmmm…” Her lips curved up in a smile. Her face should look handsome, why did it look so adorable? She was still curious so she asked again. “Do you have any regrets?”

“Not the least.  It is enough to have one true love.”  He emphasized the last sentence and look on as her cheeks reddened expectantly.  He knew she was uncomfortable with such intimate banter but she needed to get used to it if she was to heal her emotional wounds.

He smiled and changed the subject. “Those three days must have been hard on you.”

Her head throbbed just thinking of ‘those three days’.  Gong Sun Zhi has omitted telling her that the effects of the aphrodisiac would last for three days, causing her to think that her baser instincts have gone wild, and that her wild thoughts in the day had manifested into dreams at night.  Luckily, her endurance and control were very good, and she silently congratulated herself for refraining from doing anything crazy during that period.

His good-looking face lean in before she could close her eyes, so she saw how he placed a gentle kiss on her lips.  Her lips were tingling but she kept her hands folded behind her.  His eyes were also open and the black orbs reminded her of lakes in spring.  In the past, she has thought that his eyes were like stagnant pools; now, she that his eyes, his lips, in fact the whole of him, would only glow for his family, leaving a cold exterior for others to see.  If he was indeed the lofty Luo Shen per his image, she believed he could never have kissed anyone like that.

She lowered her eyelids and clenched her fist as he placed one more kiss, and another one, until there was a trail of gentle kisses all the way to her ears where he stopped. “This time, there is no medicine smell.”  He fervently hoped that he would never smell medicine on her again.  At her confused look, he smiled. “Wu Bo, your endurance skills are indeed second to none.”

She croaked: “You are too generous with your praise.”

He straightened and brushed his fingertips gently over her cheek as she gave a small cough. He smiled. “Come, let us go in and not keep our hosts waiting.”

She nodded. “Ok.  Xian Yun shall walk in front.”  She was still accustomed to walking behind, and not be first line of attention.  As he turned and strode towards the hall, she touched her lips.  Actually, she did not intentionally refrain from kissing him back; she was just too used to restraint.  Gosh, it was so confusing to switch between things that needed control and things that didn’t!

And speaking of control, she seriously doubted that her level of control was anywhere near that of Deity-from-Nine-Heavens.  During the three days when she was under the influence of the drug, he was the only person whom she came in contact with, and yet he did not appear to have any reaction at all.  Was there some problem with the aphrodisiac or was there a problem with him?  In comparison, she nearly wanted to wrestle him to the floor when he kissed her just now.

This man, was a wolf. He has became much bolder since she became his sworn sister and she knew he was trying to wear her down her beliefs with his incessant hanky panky.

He turned back and she saw the look that he reserved for his family.  So why had he not ask whom she had dreamt of?  Was he really that self-confidant, or was he held back by some manly restraint?

She grumbled under her breath and heard him call her name.  Sighing, she walked up to him while muttering under her breath. “I am enduring here and enduring there, but what am I enduring for?”  She was not trying to be like Gou Jian and taste excrement, surely there was no need to carry her endurance training to such extremes?

Stepping into the wedding hall, she noticed something weird straight away. Although there was no dress code and people could dress whatever they like, many female pugilists were dressed in the same style as her except for the colour.  They wore a short-sleeve top with matching long skirt, tied at the waist with a long belt that nearly touched the floor.  Even the fabric seemed to have come from the same source.

It was as if there were many Jiang Wu Bos all of a sudden.

Gong Sun Zhi saw her expression and coughed discretely.  “It is not easy being a Fairy.”

Her question was calm. “How much did Cloud Manor make this time?”

She has finally discovered the gold mine in Cloud Manor.  No wonder they were so enthusiastic about her Fairy title!  No wonder she was often asked to make an appearance at the female quarters whether she was busy or idle!

At this moment, the dignified halo of Cloud Manor in her mind’s eye has taken on a very materialistic, golden hue. It was not easy feeding an entire family, besides the same gold has also provided for her soy sauce fried chicken...

What can she say besides foretelling that Cloud Manor will be around for a long, long time?

To preserve a bit of her uniqueness and prevent an overdose of Jiang Wo Bos, she decided to break off from the main wedding party and wandered around.  When she reached a certain spot, she paused and listened to the faint sounds of bells.  She has heard this sound when she left Bai Ming Sect with He Zai and they wrapped their bells with cloth to muffled their sound.  As she looked discretely around, she recognized many Bai Ming Sect members in the hall.

Suddenly, a whip suddenly lashed out and sent a man crashing to her feet.  She did not move and looked quietly at Che Yan Yan who appeared from the darkness.  With five Sky Slaves flanking her, she made a pretty grand entrance.  One of the taller Sky Slave was carry a big gunny sack where a bit of wedding dress can bee seen peeking out from the opening of the sack.

Che Yan Yan narrowed her eyes and looked up and down at her. “Are you Fairy No Waves?”

“How coincidental for you to run into me when I was about to look for Xian Yun’s one and only sworn sister?”

The man at her feet turned out to be He Rong Hua. “Miss Jiang, leave quickly! Go inform Xian Yun that Deng Hai Tang has been kidnapped and that your brother has been injured.”

It took her two seconds to understand that he was referring to the little plump ball who was supposedly her little brother and she wrinkled her brow in displeasure.

That is strange, why would she feel unhappy?

Che Yan Yan stepped forward to get a better view of her and was shocked. “You…!”

She sighed and was about to say “Bingo! I am indeed Huang Fu Yun.” when she heard Che Yan Yan continue: “Your features are good-looking, but they are better suited on a man.”

Jiang Wu Bo was speechless.  Isn’t Che Yan Yan taking her love for man a step too far?  Did she even find her attractive now? Oblivious to her thoughts, Che Yan Yan continued. “It is pity that none of you could escape from this place.”

“Isn’t Protector’s Che kidnapping the bride to force someone to reveal herself?”

“How did you know?  Wait, where have I heard your voice before?”

She sighed. “It is not important where you have heard my voice before.  What is important is that you have seen the body of Huang Fu Yun with your own eyes, yet Sect Leader has refused to believe you and ordered you to kidnap the wife of Silver-Hand Du San Lang and injure He Rong Hua to force Huang Fu Yun to reveal herself.”

She made a non-committal sound and gestured with her free hand behind her back for He Rong Hua to leave.  But He Rong Hua thought it was embarrassing to abandon a lady in distress so he hesitated.

She could only sigh and continue. “Why not we make a bet.   Since you are after Huang Fu Yun, why not you take me hostage instead?  That will be so much better than nabbing the wife of the martial arts scholar.  At least Bai Ming Sect would not anger both the Court and the Central Plains pugilists. With me in your hands, Xian Yun would naturally intervene and find Huang Fu Yun for you.”

Che Yan Yan gave it some thought and returned with beautiful smile. “That will be too troublesome!  I am not going to let either of you off.  Men! Bring both of them back!”

As a Sky Slave got near to her, she him a flying kick and yelled for He Rong Hua to leave.  Although she has only mastered a third of her family skills and was not on par with He Zai in terms of skill, she thought she could still hold off their attackers until He Rong Hua escaped, afterwhich she would be able to surrender.