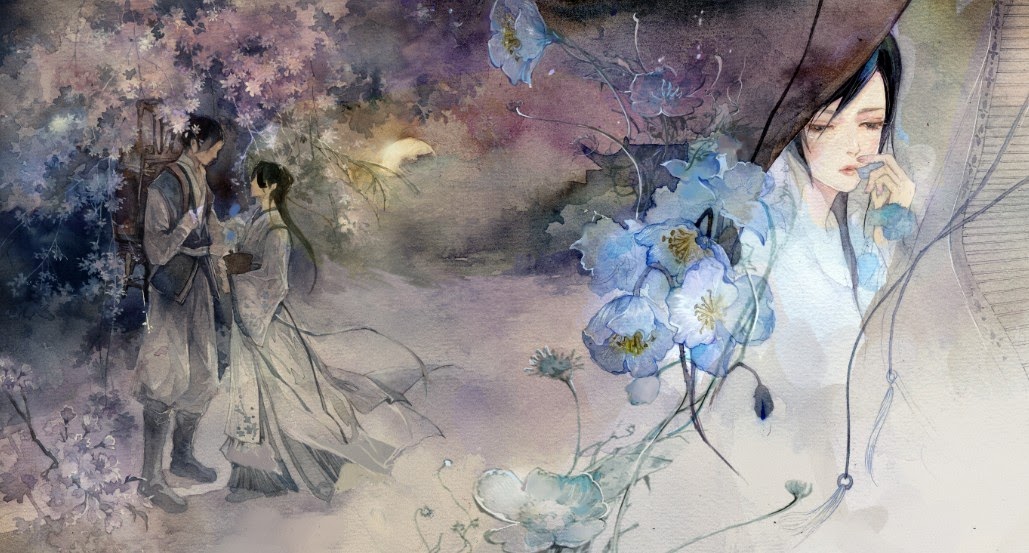 This marks the end of the first arc! So, does Little Moon succeed in marrying Hsiao off to his first fated lady? :)

Personally, this was my favourite chapter in the first arc. Enjoy!

Chapter 5: Beauty is in the Eyes of the Beholder

The other seven gentlemen dejectedly left the Cloud Manor, inwardly and outwardly sighing that heaven did not look kindly on them. Indeed! Heaven, or at least a small probationary Moon Maiden, was looking kindly on Hsiao.

The rest of us returned to the Grand Hall of the Cloud Manor, with Mei Yun looking particularly pleased.

When we arrived at the Grand Hall, we saw that there were three wooden tables already set up, with a scroll of white paper, inks, a slabstone and various brushes. It was gradually becoming clear what would be the final round.

The three gentleman naturally each sat at a wooden table. Master Qian Yun and Mei Yun went up the raised platform, and the rest of us, small side characters, moved aside.

Master Qian Yun nodded slightly helplessly to his daughter, with a look of strong doting and pride.

Mei Yun smiled and began, “For the final round, I ask each of you distinguished gentleman to paint your vision of me. I would like to see how I appear to you in your eyes, from there, I will pick my husband.”

Upon hearing that, General Yang scowled and glared at Gentleman Yun Feng. I also gave a small frown, this round was incredibly subjective and we all knew where Mei Yun’s heart leaned towards…… but could I, could I use hypnosis to temporarily change Mei Yun’s mind? Could my heart allow me to do so?

As I fell into deep thought, the three gentlemen started to paint with Mei Yun sitting on the stage, her gaze falling towards Gentleman Yun Feng every now and then. Her cheeks slowly started to gain a rosy tint; it was like watching a flower blossom.

I turned to look at Hsiao. Thankfully, he actually seemed to be concentrating and was painting carefully. I let out a sigh of relief, no quick one tea cup job this time.

General Yang appeared to be slightly struggling, his brush strokes appeared thick and rough and one wondered if he was battling the paper instead of painting.

But, Gentleman Yun Feng, ah, every now and then a smile played at his lips, he did appear to be painting like the paper was his lover.

After the burning of one incense stick, all three gentlemen appeared to have finished. Nervously my hands clutched each other, but this was no match for Mei Yun’s own tight grasp of her handkerchief – as if the nearer the end goal appeared, the fiercer her heart beat.

General Yang went up first. He unrolled his painting before us… four bold Chinese characters practically declared itself from the scroll, “第一美人” (the number one beauty in the land). He turned to Mei Yun, “This is you in my heart, the most beautiful woman in the land, as your husband, I will ensure your beauty will always remain, I will fight for you, protect you, and then make you the happiest woman in the lands.”

Mei Yun took the scroll from General Yang and nodded, but she did not say anything.

Gentleman Yun Feng went up next, slowly, he unraveled his painting, so tender was his actions it was as if he was unveiling his bride. 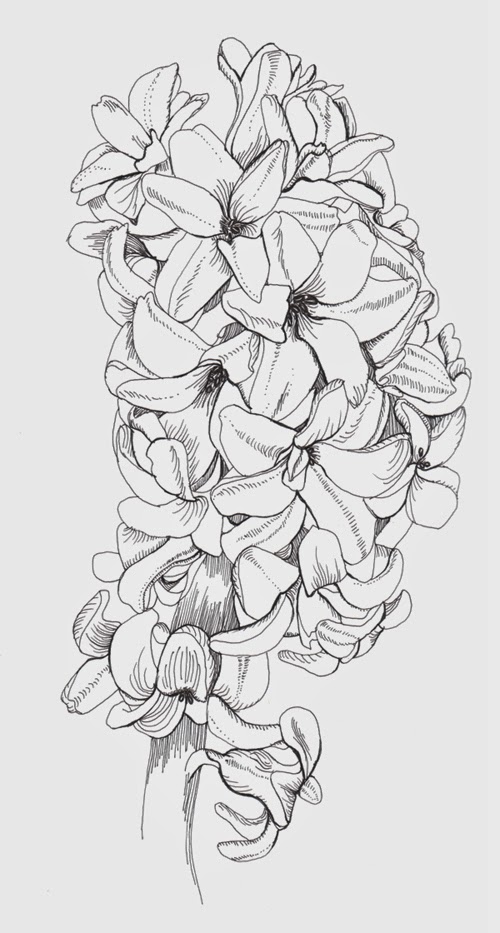 Gentleman Yun Feng smiled, “One promise, one lifetime, only one woman.”

A tear slowly fell down Mei Yun’s cheeks, “ My love will remain even after the last blue hyacinths fall…”

Hsiao smoothly went up the stage, he nodded appreciatively at Gentleman Yun Feng’s painting, “In the language of flowers, hyacinths represent constancy and blue hyacinths denote sincerity. You have a faithful gentleman, Lady Mei Yun.”

Mei Yun blushed. Not even waiting for Mei Yun’s response, Hsiao started to unroll his own scroll. I held my breath, well maybe if Hsiao painted a beautiful portrait of Mei Yun, she would choose him? Maybe?

Everyone fell in shocked silence as Hsiao unrolled an empty sheet of paper. So white, one wondered if he had been painting it white throughout the burning of the incense stick.

“Lady Mei Yun asked us to paint you as you appeared before our eyes, but my humble interpretation was that Lady Mei Yun wanted to know her weight in our hearts. To not fail Lady Mei Yun’s intentions, I sincerely asked my heart what was Lady Mei Yun. My answer was, “有缘无份”, we have fate but no affinity. You are the beautiful cloud that will pass me by, in our hearts, there is only nothingness,” Hsiao said, and respectfully gave a bow towards Mei Yun.

Mei Yun gazed at Hsiao, as Hsiao lifted his head, their eyes met – there seemed to be a spark. No matter how much you changed fate, the people remained who they were --- soulmates of the mind will always be soulmates of the mind. But, I watched as there laid indeed nothingness, not even a pink thread to connect their hearts.

Mei Yun smiled widely, “If I had to say who understood the final round best, it is you, Gentleman Hsiao. But, precisely because we understand best, we also know why you are not the answer.”

Mei Yun turned to her father, “My answer is Gentleman Yun Feng.”

Master Qian Yun and General Yang appeared to be wanting to say something when Hsiao spoke, “I pay my congratulations to Master Qian Yun for gaining such a truly worthy son-in-law, Gentleman Yun Feng is of brilliant mind and constant heart, he will be sure to rise high with your support at the Imperial Examinations.”

Master Qian Yun paused for a moment, he observed Hsiao’s determined gaze and his mouth broke out in a wide grin, “Indeed, indeed. I cannot think of a better match for my daughter.”

And so, I watched as that trace of tragedy in Gentleman Yun Feng and Mei Yun’s red thread lightened… only to have the most beautiful red rose of a red thread, like a love in its prime, a love in full bloom, a love that has finally reached its time to blossom.

I watched as just as their thread lightened, one red dot on my right palm turned black. But, I smiled.

Hsiao turned to looked at me as we walked out of Cloud Manor. He had declined to stay for the wedding ceremony of Gentleman Yun Feng and Lady Mei Yun, and I had informed the twins that I had to leave to go to my real master (I think they always thought I was rather suspicious and were too happy for their mistress to care).

“Are you disappointed that I failed to gain Lady Mei Yun’s hand in marriage?” Hsiao asked, his eyes a mysterious black.

I shrugged, “I can’t say I am not disappointed. I am both happy for the couple who are very much in love, but sad that Hsiao has lost his fated beauty.”

Hsiao’s eyes twinkled at that as we strolled down the street.

“Speaking of which, what were you painting then in the one hour? I thought I saw you painting a woman’s face,” I asked curiously.

Hsiao laughed, “Not exactly a woman.” He took out another scroll from the sleeves of his robes.

I eagerly unrolled it…… a young girl in white robes, her slightly curved face like the young beginnings of a full moon, twinkling eyes like a star running through the River of Stars, why… that was me. 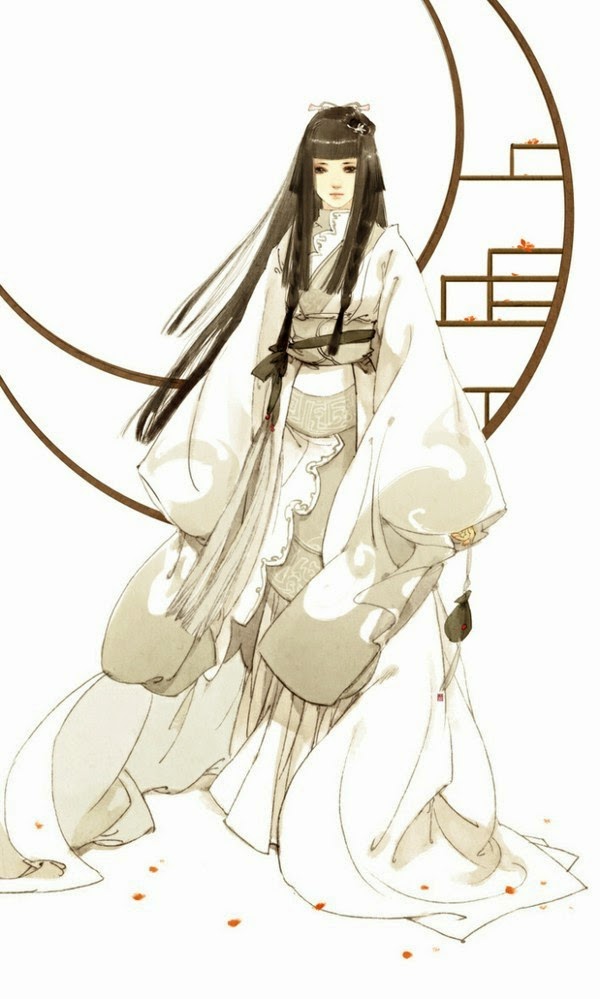 “It’s not every day I see a man dressed up as a young girl, I thought I should capture it,” Hsiao said.

Furious, I whacked Hsiao’s back with my hand, but couldn’t bear to use the scroll to hit him. I rolled the scroll back and tightened the ribbon around it, “Well, I’m keeping this.”

“Come with me to the snowy mountains of Xue,” I said, “Come with me and we will no longer owe anything to each other.”

Hsiao’s eyes glistened with mild surprise, but he nodded.

You don’t know it yet, Hsiao, but there in the snowy mountains of Xue lies your second wife. A beautiful warrior princess who saved your life, and whose warriors protected your life forever more. There, Hsiao, lies both our salvation.