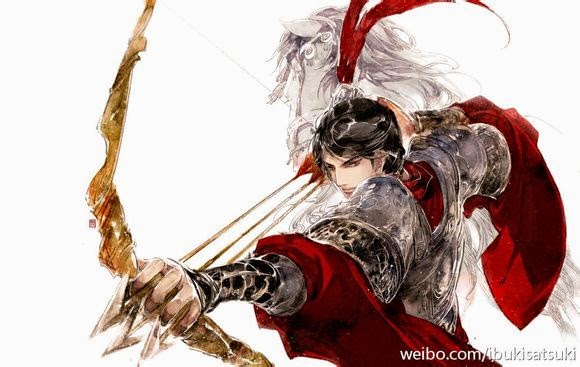 I have been so used to writing my commentary after my translated pieces that sometimes I find myself commenting after the chapter, but I usually delete the commentary later because I don't want to affect your reading experience. Haha. I find everyone's questions regarding the characters very intriguing, these were questions I thought about when I conceived the character and story framework but I didn't realise that readers will look so deeply into everything! I really am very thankful for the support. *does head bow again*

I'm recovering quite well, and should be returning to translating by next week. Much love from me and Yue!

Chapter 4: Straight To The Heart

I couldn’t stop my cheeks from reddening under Hsiao’s gaze. But, I brought out all my shamelessness, picked at my collar (while magicking a tiny Adam’s apple), “I’m still a guy, but I had to dress up as a girl to become a maidservant to get inside information… anyway, that’s not important, we need to get Gentleman Yun Feng to come with us.”

Gentleman Yun Feng looked surprised then a little suspicious, “Has she sent a message?”

I looked around and saw that some of General Yang’s guards were looking at us. Even though they were unlikely to act in a crowd, there wasn’t much time to waste, “My love will remain even after the last blue hyacinths fall…” I repeated this line that Mei Yun kept murmuring to herself in the day as she thought about the competition, I suspected that it meant something between the two of them.

Gentleman Yun Feng’s face reddened and he nodded, “I will follow you.”

So, quickly, the three of us left, with Hsiao still giving me a mirthful look.

Hsiao brought us back to the inn he had been staying at. That spendthrift actually rented an entire small villa from one of the Cloud Inns (owned by Master Qian Yun) and even Gentleman Yun Feng looked slightly surprised at the grand lodgings.

I cleared my throat and told Gentleman Yun Feng, “My mistress was worried about your preparation for the second round of archery, so she asked me to…”

Before I could finish, Gentleman Yun Feng raised up his palms, I could see that there were many cuts and calluses on them, “She has no need to worry. I have been practicing my archery… I’m still not good at it, but hopefully the heavens will look kindly on us and what I have will be good enough.”

I nodded, “There are enough spare rooms here. Please practise and stay here for the night, so my mistress’ heart can be at ease.”

Gentleman Yun Feng gave a respectful gesture of thanks and made his leave to practise his archery.

I turned to Hsiao, who looked at me with a raised eyebrow and a smile, “So are you helping two different men now win Lady Mei Yun’s hand in marriage?”

Shameless as I usually was, I blushed again, “Don’t you know? To know your competitor is to win the war. Gentleman Yun Feng is Mei Yun’s favourite to win her hand, it’s good to observe him at close quarters.”

Hsiao chuckled and did not ask more. I continued, “Speaking of which, how is your archery?”

Hsiao leaned his chin aside and gave me an examining look, “You don’t seem to know anything about me, do you? For a fortune teller who claims to share the same fate?”

I patted him on his shoulder, “One must always look to the future, my friend, not the past!”

I paused, “I can get you a bow and arrow to practise if you need them?”

Hsiao shook his head, “Maybe you should go get some male clothing instead!”

I huffed and left him laughing in the yard.

Thinking of the tipsy Yue, I still remembered the moment when I first saw Yue in female attire. At this, I felt my heart experience a strange itching feeling. “Her” small face, fair complexion, bright eyes, blushing cheeks, “she” was like the young moon reflecting the beauty of all the budding blossoms on earth. There was something natural about Yue as a girl --- that equaled the strangeness of Yue as a male.

I smiled to myself as I heard the soft footsteps of the intruders on the roof. This Yue, clearly he had invited Gentleman Yun Feng to join us thinking he could protect Gentleman Yun Feng from General Yang’s men – but this silly child went to get himself drunk.

I flew up the roof, “Greetings men, I’m afraid I have bad news for you.”

The next morning, I woke up with a start. What happened to Gentleman Yun Feng? Darn it, I shouldn’t have drunk so much. My head was still woozy.

I got up as quickly as I could and opened the doors. I bumped straight into Hsiao and Gentleman Yun Feng in the yard.

I gave out a sigh of relief. Hsiao turned to me with a smile, “Had a good night’s sleep?”

I nodded, “I’m sorry for the wait. Let’s head to Cloud Manor to prepare for the second round.”

As we left, I looked carefully around the small villa. No signs of intrusion during the night before. Maybe the weak shrouding spell I had placed on the villa worked! I didn’t have much confidence in my spell skills, but it looks like everything turned out fine. Looks like lady luck was on our side!

When we reached Cloud Manor, I bade farewell to Hsiao and Gentleman Yun Feng so I could find Mei Yun and the twins.

Mei Yun and the twins were already at the field outside where the archery tournament had been prepared. An archery target was set up about one-tenth of a Li (里)* away from the starting line.

Mei Yun was already seated at a specially prepared sheltered corner and she was worriedly looking at the target. I sheepishly paid my greetings to Mei Yun and the twins, “Lady, I apologise for leaving earlier yesterday, I was feeling unwell.”

Mei Yun waved her hand as if to say it was of no importance, she turned to us, “Do you think we can move the target nearer to the starting line?”

Xiao Hong Mei shook her head, “Your father’s guards are around, my lady. We can only pray for heaven’s blessings.”

Hearing this, I thought to myself well… arguably I could try and use some of my powers and let the wind guide Gentleman Yun Feng’s arrow just like what I planned to do for Hsiao’s arrow… but if I did…

Before I could complete my thought, I heard a trumpet sound. Master Qian Yun rose up to a stage that was prepared and greeted his ten distinguished male competitors, “We have set up a target one-tenth of a Li (里)* away. The three arrows closest to the bull’s eye will move on to the final round to win my daughter’s heart.”

Three gentlemen, whom I had not bothered to notice earlier, went up to take their turn at the target. One had completely missed the target. The other two were relatively competent, but their arrows hit the furthest rings of the target. They walked off disappointedly.

Gentleman Yun Feng was fourth. Nervously, he walked up to the line with his own bow in hand. He took the arrow from one of the guards gingerly and placed it in his bow. He closed his eyes, gave a kiss to the bow, then pulled it taut – he released the arrow…

It flew! And landed just right next to the bull’s eye.

Even Mei Yun could not help herself, and she gave a clap of joy.

General Yang saw this and his eyes turned cold. With heavy powerful steps, he walked towards the line, not even greeting Gentleman Yun Feng as he left, he quickly took an arrow and let it loose like a cannon shot from his bow.

It landed on the bull’s eye!

The four men who came after General Yang were perhaps affected by General Yang’s dominant aura. They did not fare too well, and Mei Yun was pleased to see that General Yang and Gentleman Yun Feng’s arrows were nearest to the bull’s eye.

Now, it was Hsiao’s turn. I guess his usual indifference had its merits as he appeared completely unintimidated by General Yang’s show of brute force.

I was preparing to concentrate all my powers to adjust his arrow if need be with the wind, when Hsiao let loose the arrow smoothly as if it was but a fleck of dust on his shoulder.

Before I could even react, his arrow sliced into General Yang’s arrow.

I turned to look at Hsiao, and that was when I realized he had not even been looking at the arrow. He was looking at me. He smiled, perhaps one of his first real smiles, for it reached his eyes, and seemed to say, So, are you finally looking at me?

*At first, I used the olympic archery distance of 70m and Sherry astutely pointed out that such a measure of distance probably did not exist in ancient china. Thus, I used li (里) instead which is commonly accepted to be 500m in length.