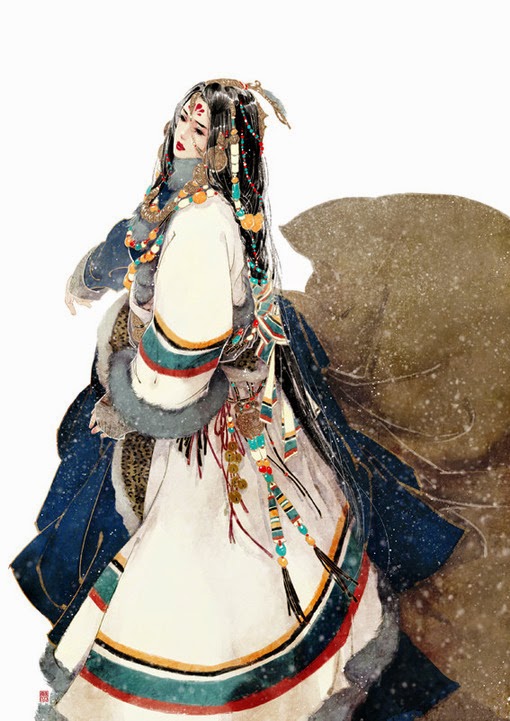 I was so happy to finish editing Chapter 11. The entire second arc was written to reach this point and it's definitely my most favourite chapter for the second arc. I'm so excited to share this chapter!

*You get to learn Hsiao's real name in this chapter as well, and his real name was inspired by Hui'er.

As I carried Yue down the mountain in my arms, with his tattered robes and feigned unconsciousness, I did not know whether to praise Yue’s shamelessness or laugh at my cooperation.

There were some soldiers on guard at the base of the mountain and they appeared surprised to see me. This was natural since no one ever saw me go up the mountain. One blew a whistle and very quickly I saw Princess Bai Ying ride on her white steed towards us.

I nodded a greeting to Princess Bai Ying, “Greetings to Her Highness. I had received a signal of help from Yue’s white bird and went up the Holy Xue Mountain to rescue Yue.”

Princess Bai Ying looked at Yue with alarm and worry, “Is he alright?”

“He has no external injuries… he is probably just frostbitten by the cold and some warmth and rest will be sufficient,” I said as I declined the offer of another soldier to carry Yue.

Princess Bai Ying nodded, and then she turned her gaze towards the Holy Xue Mountain. She was gazing at something very far away, and her eyes clouded with greater worry.

I hid a smile and gave a firm look to Princess Bai Ying, “General Tie Shi will be fine. I can see that his heart was much stronger than Yue.”

Princess Bai Ying returned my glance, but the sadness in her eyes did not lessen, “Which only gives him no exit.”

When I finally placed Yue down in his chambers, Yue immediately opened his eyes and I could see they were filled with worry and regret.

I arched my brows, “Isn’t it a bit late to worry now?”

Yue paused, “I never doubted that General Tie Shi would be able to pass the test, because his heart was a true heart if I ever saw one! But, perhaps this test was more dangerous than I fathomed…”

I patted Yue’s head and he lifted up his eyes to me like a young puppy seeking reassurance, “You do not need to regret. I saw no regret in General Tie Shi’s eyes when he went up the mountain. A man’s heart is worth living and dying for.”

Yue seemed to ruminate over my words as he murmured, “A man’s heart is worth living and dying for.”

“Yue,” I said, “I plan to leave the Xue Mountain Tribe after the seventh night and after General Tie Shi returns.”

Yue looked at me in surprise.

“It’s time for me to return home,” I continued, “Would you go with me?”

I smiled, “Without even knowing where it is?”

“Wherever you go, I will go,” Yue declared as if it was the most natural thing in the world.

I laughed, and my eyes turned solemn, “Yue, the journey to my home is very dangerous because there are people who want to kill me before I reach home.”

Yue’s eyes flickered but he said with no hesitation, “Then, even more I need to follow you.”

“Before you decide to follow me,” I begun, “Let me tell you my story. Yue, my real name is Hsiao (晓 – dawn*), Second Prince Hsiao. At sixteen, my mother sent me away from the palace with only one promise to my father which was for me to return to the palace when I turned twenty-one…”

When Hsiao finished his story, he looked at me and I knew I could not give him the response he wanted. He had bared himself to me, and yet here I stood before him still clothed in an identity that was not my own.

I cast down my eyes on my right palm, on the three dots, on the sole black dot and the two red dots, on the path that I needed to take.

I lifted up my head and forced the brightest smile I could muster, “I don’t have to call you Prince Hsiao now, do I?”

Disappointment rippled through Hsiao’s eyes and my heart twitched. I continued to smile widely, “Well, since I saved you once, I must ensure that at least you get to the Royal Yan Palace safely. After all, I told you I would make you the greatest Yan Emperor of all, didn’t I?”

Hsiao fell silent and then he smiled, an equally hollow smile, “Yes, you did.”

(iv)
For the next four days, it seemed like a long shadow was cast over the Xue Mountain Palace. Everyone counted down to the morning General Tie Shi was expected to return. Princess Bai Ying also got noticeably thinner with each passing day, and her eyes were especially sunken as if she could not sleep.

Consciously or unconsciously, Hsiao and I would share some meals together but the conversation always faltered. As if an invisible barrier had formed between us even though strictly speaking, nothing had changed.

Sometimes I would feel pangs of frustration and annoyance, why is it that just because Hsiao has opened his heart to me, he demands the same? Wasn’t that just plain arrogance?

But, haven’t I acted the same to General Tie Shi? Haven’t I forced him to reveal his heart to Princess Bai Ying whether he wanted to or not?

Perhaps, I had acted with some selfish intent because I no longer wanted Hsiao to marry Princess Bai Ying. But, why I had this selfish intent, I did not dare to think deeper.

Oh, the heart was a treacherous creature, Uncle. I realized then that the most fearsome part of the Holy Xue Mountain wasn’t any predator but one’s own heart.

On the eighth morning, all of us stood at the base of the Holy Xue Mountain in silence. I could see that Princess Bai Ying had clenched both of her fists so tightly together that the vessels at her knuckles wanted to burst.

Dawn broke, the very faint winter sun rose, but no one came down the Holy Xue Mountain.

As the very faint winter sun rose higher and our shadows grew longer, Princess Bai Ying did not move. So, we all waited.

When the very faint winter sun was starting to fall, the Great Xue King placed his arm around Princess Bai Ying’s shoulder but she said, “等 (Wait).”

When the sun vanished and the soldiers started to light up the night lanterns, we could hear the sound of footsteps.

In the far distance, one could see a figure. Princess Bai Ying started to run up to the mountain and she threw herself to the figure.

As I walked slowly up the mountain, I could see that it was General Tie Shi, but his robes were full of blood. There was also a huge fleshy scar on his left cheek.

But he was smiling, and Princess Bai Ying was crying. And, there was a golden ginseng in his hand.

I paused, then. Love is always there, it is only the faint of heart that loses its path towards it.

I heard Uncle’s voice in my head and turned around.

The maroon coloured thread in General Tie Shi’s heart had turned pink, and it was now connected with Princess Bai Ying’s heart. It was a love that was beginning.

I looked at my palm, and the two dots were still red.

This was unorthodox and probably frowned upon but Princess Bai Ying heartily agreed. 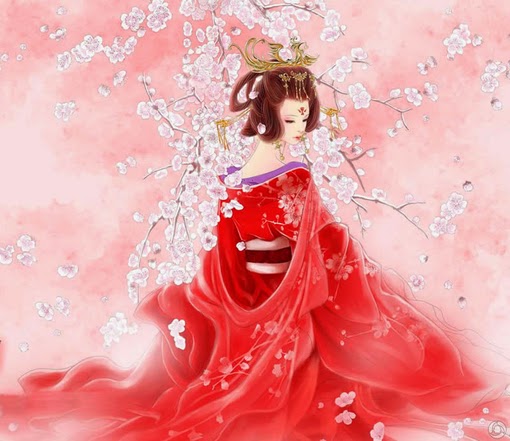 Princess Bai Ying was beautifully adorned in ravishing red robes with white blossom flowers embroidered through the top to the bottom of her robes like falling snow. Her hair was combed upwards in a bun elegantly fixed with a golden Phoenix crown.

She turned to me with a wide smile, “Yue, why have you come to see me?”

“Because I owe you a debt of gratitude,” I smiled.

Princess Bai Ying shook her head lightly, “You pushed General Tie Shi to face his feelings and that is more repayment that I could ever receive for saving your life.”

I moved closer to Princess Bai Ying and placed her hand on my chest, “I was hoping to call you Sister.”

Princess Bai Ying started to laugh great ripples and peals of laughter, “Why, Yue, you had fooled us all!”

Princess Bai Ying’s eyes suddenly twinkled, “Then Hsiao is not your brother?”

My cheeks flushed, “I actually saved his life once.”

Princess Bai Ying clapped her hands excitedly and called for her maidservants.

(viii)
Yue was nowhere to be found. He had been acting strange, well stranger than even his usual, ever since General Tie Shi returned.

When Princess Bai Ying arrived with a great entourage to join General Tie Shi on the raised platform in the Grand Hall, Yue was still nowhere in sight.

After Princess Bai Ying and General Tie Shi exchanged a cup of wine and both signed an engagement contract, the Great Xue King announced that the engagement was official and the festivities could begin. So much wine had been drunk in the past few days at the Xue Mountains that I was surprised that there was still alcohol to be drunk.

My heart jumped when a girl dressed in the traditional white garments of the Xue Mountain Tribe with green, red and yellow rings around the sleeves and multi-coloured beads around her hair moved towards me. Her head was covered with a veil and she walked towards me.

I wanted to move away because I certainly did not want to dance with any women, but there was something about the purposive way she moved that stopped me.

When she stood before me, she lifted up her veil.

My mother had once told me that she named me Hsiao (晓－dawn), because when I was born, it felt like the world was bathed anew in light.

She looked at me with her clear black eyes, like the night piercing through the crescent moon, and smiled.

So, this was my dawn. 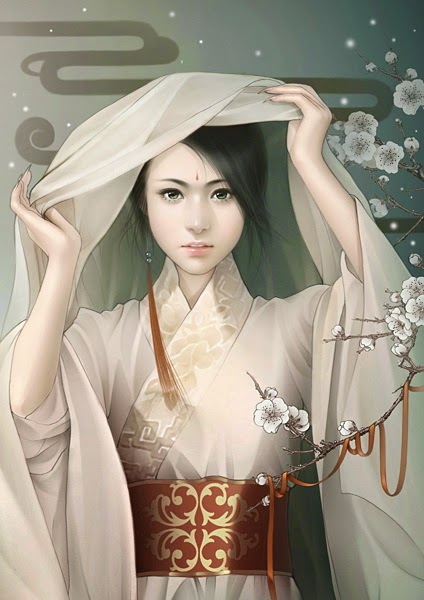 I smiled at Hsiao, who stood frozen before me.

I reached out my hand towards him in invitation for a dance, “Hsiao, we have finally come full circle.”


Photo credits of the red bride to qianyu (thanks lemonsalt!)