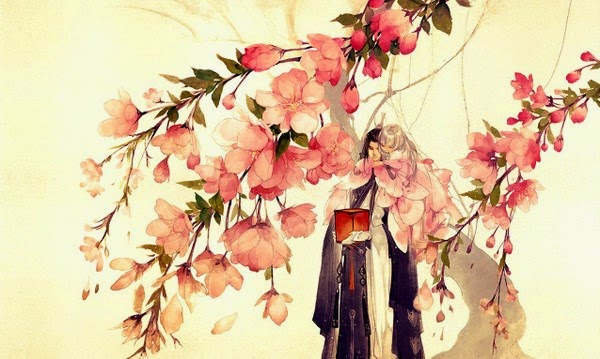 My favourite character gets a lot of screen time in this chapter :). I am a happy girl.

Chapter 8: A Marriage Across A Thousand Miles

“You can wake up now,” I heard Hsiao say, and so I slowly opened up my eyes. I had pretended to fall asleep on the way to the palace, because I hadn’t decided how to deal with the situation.

The Xue Tribe practised only one trade, which was the rare ginsengs that grew at the higher peaks of the Xue mountain, they only traded the lower grade winter ginsengs, but it was rumoured that there was a holy ginseng that could cure all illnesses and even lengthen life in the Xue mountain. It was said that twenty years ago, the Wu Kingdom requested for this holy ginseng, and the Xue Tribe refused. The Wu Kingdom sent its head general and ten thousand soldiers to attack the Xue mountain … that day is still remembered as the day the Xue Mountain turned red.

It turned red with the blood of the Wu men. No one ever dared attack this impenetrable fortress again – the Xue battalion might be small, but they knew the icy precarious territory better than anyone. Growing up in such cold and difficult conditions – it could be said that the average Xue citizen was probably ten times stronger than the Yan citizen. But, most frighteningly of all, the Crown Princess of the Xue Tribe, had picked up an ice shard at six and used it as a sword. By, fifteen, no other male was her equal. She was the much loved, but even more feared, Princess Bai Ying.

And, instead of saving Hsiao during the mountain rumble, that Princess Bai Ying saved me!

I sighed as I opened my eyes. I had been brought to a bedchamber, it was tastefully decorated in shades of blues and silver, and the silk bed sheets were almost as good as the ones in Heaven.

“So, you already knew about the Xue Tribe tradition of 以身相许, repaying a debt of gratitude to your saviour with your life either in marriage or servitude?” Hsiao laughed.

I glared at Hsiao, “Don’t you think you have been treated very generously by your saviour instead?”

Hsiao paused, “Why are you so worried anyway? It’s not as if you could…”

I stopped Hsiao from finishing his statement because no good could come from his mouth. “Anyway, Princess Bai Ying is not meant for me. She is meant for you!”

Hsiao shook his head at me, “Is matchmaking me all you think about?”

I very earnestly nodded, “Yes! Did I not tell you that you have to marry three fated women to become the greatest Yan Emperor ever?”

Hsiao kneaded his forehead with his fingers then he gave a chuckle, “But, it turns out you might become the Xue Emperor instead!”

I slapped his shoulder, “Could you be more serious about your own marriage?”

Before I could give another playful whack onto Hsiao’s shoulder, he caught my hand in his palm and looked me straight in the eye, “Then let me seriously tell you, even if I ever become the Emperor one day, I do not need to marry three women in order to become the greatest Yan Emperor. I would not seek wealth, military might or beauty – the only fate I want would be the one I trust.”

I did not know why but the hand that Hsiao held became very warm. I gave a nervous cough and then smiled, “How would you know you couldn’t trust Princess Bai Ying? In a war, you could trust her with your back!”

Hsiao looked at me closer then laughed, “A man’s back is very different from a man’s heart! No, I can tell you, Princess Bai Ying is not for me.”

I had pretended to be tired and Hsiao had left for his own chambers. In truth, I was experiencing an unknown heat from the insides of my cheeks and hands. I could not help pressing my cheeks in the warmth of the irony – this was a place of eternal winter!

What was it about Hsiao that got under one’s skin? Is it the way he seemed to read your mind but you could not read his?

Troubled, I took out the red thread I had always kept in a small silk sachet in my robes. When I turned eight, Uncle gave me this red thread – “This is your beginning, Little Moon.” I had beamed so widely at Uncle and told him that I would make him proud.

Everyone thought that Uncle had the happiest job connecting marriages in the Heavenly Realms but after observing Uncle for a while – I thought that wasn’t true. Sometimes, Moon Maidens would get upset because the red threads they connected did not always end well – Uncle would give them a soft consoling smile, “We are not in the business of happiness, we are in the business of love.”

“But shouldn’t love bring happiness?” I had asked Uncle later, and Uncle had only given me this sad smile that crinkled his eyes into tiny crescent moons.

That night, I remembered Uncle had brought me high up the sky on big billowy clouds and we had watched the little stars dance up a ball with each other.

“Do you know why we connect mortals, Little Moon?” Uncle smiled at me.

“Because they will get lost without the red threads?” I ventured.

Uncle had chuckled and stroke the top of my head, “The universe is made up of complementary and opposing yin (阴 dark) or yang (阳 light) elements.  Unlike us gods, mortals are made up of either the yin or yang elements. Women are yin and men are yang. When they are born on earth, they immediately long for the other.”

“Their missing half?” I asked.

Uncle nodded, “Their missing half.”

Uncle’s eyes cast downwards and he seemed to be looking so far away, “But the world is a very big place, and it might not be easy to find the person you have been looking for. 自古道：千里姻缘一线牵＊ (From the ancient times, a marriage across a thousand miles start with the connecting of one thread).”

“It is not that someone is incomplete before they find their other half, because they have always been connected by our little red threads. It is just that when you finally meet that special one, it suddenly feels like all the curves, bents and dead ends in your life makes sense. That person, Yue Er, is the one that brings your life full circle.”

I looked at Uncle with eyes glistening of hope, “Will I have that special someone too?”

Uncle stroke my head, “But love is painful too, Yue Er. Have you ever heard of the phrase, “刻苦铭心” – to have a love that is carved into your bones, etched into your heart, a love that you could never forget?”

I turned to Uncle curiously, “Have you ever been in love, Uncle?”

Uncle gave that crinkly smile of his again and said nothing, but the moon that hovered over us seemed to nod its head.

*This chinese phrase is a famous line from a chinese classic, Dream of the Red Chamber. I have not actually read the book, but I have always loved this line. :)