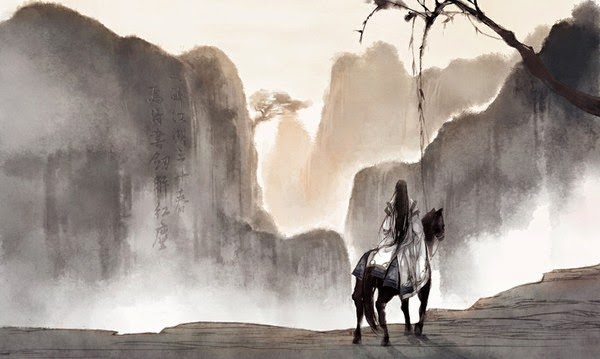 The feedback for Chapter 6 really encouraged me and made me want to share the second arc even more! I hope you enjoy Chapter 7, this new character is the one my husband likes. Haha.

Chapter 7: Don’t Put The Cart Before the Horse

After Uncle cleared my head, I suddenly felt like returning outside to see if Hsiao was still drinking.

There he was still sitting by the pavilion quietly drinking the wine. Although Hsiao always looked effortless, there was a precision to all his movements – even the way he poured cup after cup of wine for himself. It was as if he never allowed himself to relax.

As I walked towards Hsiao, he lifted up his head and looked in surprised at my sobriety.

I smiled at him, “Still drinking?”

“I, Yue, am not someone who falls drunk so easily,” I huffed as I sat down next to Hsiao on a bamboo stool.

His eyes fell down on his cup of wine as he said, “It’s a luxury to be able to be drunk.”

“That’s like a skinny person telling a fat person that it’s a luxury to be able to put on weight.”

Hsiao laughed, he inclined his head to the side and his eyes stared at me. The gaze was slightly unnerving under the cool night breeze but I couldn’t turn away.

“Tell me, great Fortune Teller, what makes a good Emperor?”

At first I thought Hsiao was going to mock me again and I was going to bite back his tongue, but Hsiao’s question surprised me so much that I actually bit my tongue in shock.

I turned to glare at him, and noticed that his eyes seemed especially bright tonight. Perhaps, he was not as oblivious to the effects of wine as he wanted to portray.

“Isn’t the answer obvious?” I laughed, “The heart.” As a probationary Moon Maiden whose job was to connect the hearts of people with a red thread, naturally the heart was my favourite human organ.

For a moment, Hsiao’s eyes flickered with a glimpse of sadness, but just as I saw it the glimpse disappeared, “What is so good about a heart?”

I reached out and pressed my hand on Hsiao’s chest. He did not move back though I felt a slight tremor of surprise flow through him. “A heart is not so easy to touch, even if you wanted to. You need real feelings to stir a heart.”

Hsiao stared at me, “Then what makes you think I will be a good Emperor?”

I thought of the three gold threads I had unknowingly destroyed and smiled, “You underestimate your own heart.”

After about a month of travel, including a pit stop at one town where Hsiao and I managed to save a beautiful young lady from being maligned for the death of her husband (yes, I will admit that Hsiao was forced to do most of the saving after I disastrously tried to plead for the young lady’s case to no avail), we had finally reached the fated spot below the snowy mountains of Xue (雪 snow).

I had even made the effort to come an hour earlier before the fated meeting of Princess Bai Ying 白英)* of the Xue Mountain Tribe and Hsiao so that nothing would be left to chance.

Hsiao gave me a strange look, “Why are we stopping in the middle of this mountain path? Shouldn’t we continue our way up the Xue Mountain?”

Hsiao arched one of his eyebrows at me because we had been riding on the snowy mountain path for a while and the scenery was the same as it had been at the bottom of the mountain – everything was a sheet of white.

“Yes, one must slow down and soak in the silence,” I nodded enthusiastically.

Before either of us could speak again, large rocks and heaps of snow started to roll down the mountain peak. Wasn’t this an hour early?

My heart started to race as I recalled Uncle’s warning inside my mind. I was a very young goddess with weak spiritual powers, the further and longer young gods and goddesses moved away from the Heavenly Realm the weaker they will become, in truth, as the days passed, my powers were receding and my physical body was no stronger than that of a mortal. If I got seriously injured, it would pose great danger to my divine essence!

I started to think furiously on how to stop Brown Beauty and considered if I should use the magic sun bead that Prince Sun once gave me. Xi Yang said that if I just broke the bead, no matter where I was, he would be able to find me (he had given it to me after I was almost killed by a demon once and he scoffed at my low spiritual abilities to protect myself). But, Uncle said not to let him find me!

Suddenly, I felt warmth around my waist, someone had leaped onto my horse and pulled Brown Beauty smoothly to a halt. What extraordinary powers this person had!

I happily turned around to give my thanks and was stunned to find myself face to face with a woman. She looked around twenty and her face was all angles, as if she was a beauty birthed from an arrow.

I didn’t know if it was my imagination but her cheeks turned pink when I stared at her.

A sinking realization fell in my heart. Princess Bai Ying? Wasn’t she supposed to rescue Hsiao instead?

I was speechless as Hsiao suddenly arrived with Black Beauty. His face was deathly white and I had never seen him so distraught before, but he immediately calmed down when he saw I was fine on Brown Beauty.

Hsiao didn’t even greet the lady beside me, but grabbed my hand, “Are you ok?”

I nodded, still at a loss for words.

Following behind Hsiao was a group of soldiers riding on horses, before I knew it, they immediately chorused, “We apologise for our incompetence, Princess Bai Ying. Good fortune that Your Highness is safe.”

Princess Bai Ying appeared to scoff at the notion that she would not be safe (in this regard, she uncannily resembled Prince Sun) and waved her soldiers away.

She turned to me with a smile, “Are you ok?”

I was awkwardly in the middle of Princess Bai Ying and Hsiao, she sat behind me on the horse while Hsiao grabbed one of my hands.

I gingerly nodded as I saw a beautiful pure white horse trotted towards Princess Bai Ying. That was probably her horse, which she had leaped from when she saved me.

I had an uncomfortable premonition as I watched Princess Bai Ying and Hsiao warily scrutinize each other. Because I remembered one very clear thing about their fates – the Xue Mountain Tribe has one clear rule, to repay a saviour’s debt, if you are the same gender, you become sworn siblings, if you are not… you will 以身相许, devote your life back in love or servitude to the other person depending on his or her choice.

Princess Bai Ying smiled brightly at me, “Let me bring both of you back to the royal palace to rest and recuperate. The weather is particularly bad these days and not suitable for traveling.”

I continued to nod hesitantly. I wasn’t sure how I was supposed to ask Princess Bai Ying to get down Brown Beauty because she seemed like she wanted to ride both of us back to the palace, and before I could even ask her about it, Hsiao got down his horse and placed both of his hands on my waist.

I gasped as he lifted me down from the horse, “Princess Bai Ying, many thanks for saving my good brother’s life. He seems to be especially affected by the accident, so I shall ride with my brother back to your palace.”

Hsiao smoothly lifted me up on Black Beauty and then swiftly got on behind me. When Black Beauty started to move forward, I awkwardly fell into Hsiao’s arms. I looked curiously at Hsiao as I felt the tension from his body subside upon our contact.

Princess Bai Ying looked taken aback by Hsiao’s actions, but she nodded and quickly got off Brown Beauty. She got on her white horse and started to lead the way.

I was about to cry, “What about Brown Beauty?” when at Hsiao’s glare, Brown Beauty started to sheepishly follow Black Beauty.

As the three of us rode upwards with the soldiers following obediently behind, I sighed, whoever said the early bird catches the worm? I shouldn’t have come to the mountain one hour early!


* 白英 is made out of the words white (白) and ying (英) from the chinese words ying xiong (英雄) which means hero. Haha, so she's a white heroine! Haha.