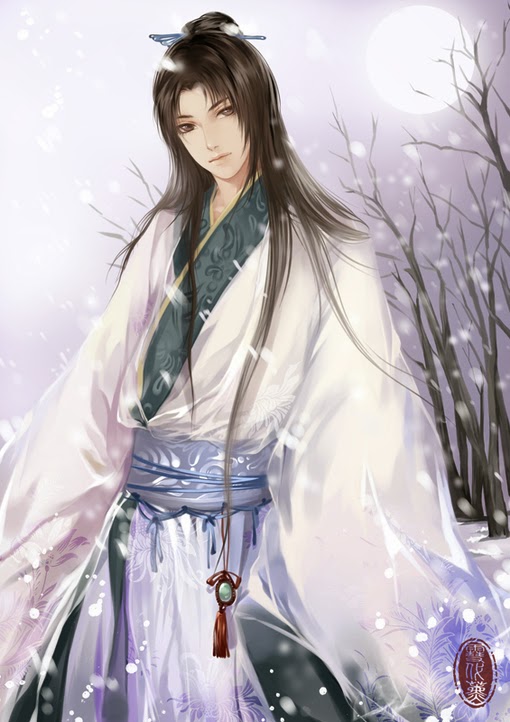 When I found this picture, my immediate thought was that was how I exactly envisioned how Little Moon looked like in male garbs! Haha.

I'm very excited to start the second arc which will explore a different idea and really test Yue's limits. During my editing, my husband read through the first seven chapters and chapters 6 and 7 were his personal favourites. I guess the second arc appeals more to males. Haha.


Chapter 6: The Moon Gives Out Advice

Just as I boldly proclaimed that we should go to the snowy mountains of Xue, it occurred to me that I still did not have a horse. Unfortunately, possessing a horse was a very crucial part of my plans in Xue.

So I turned to Hsiao and smiled, “But first, I need to get a horse.”

Hsiao lightly arched his brows, “Do you actually have any money?”

I laughed, “Money! What uncouth things! I’m a great fortune teller, I need only use my skills and gain what I need to survive.”

Hsiao gave a small smirk, and I resisted the urge to kick him. So, we headed to Temple Street where I had heard from the servants a famous temple of matrimonial bliss was situated here. I thought I could provide some offerings for my Uncle, when I gave a start……

What a long line of fortune tellers! There were so many competitors!

Hsiao turned his head sideways at me, “Are you sure you will be able to survive?”

I decided that desperate times called for desperate measures, so I first looked out for couples that already had a pink thread hooked to each other’s hearts but had not confessed… ah, perfect people to matchmake!

After a few of such couples, word of mouth spread that I was able to see “true love” and I had a steady stream of young girls coming to me to calculate who would be their true love.

The problem is that I was too accurate… and when you were too accurate, you won’t always be able to give the answer desired. In those cases, I would give a mystified look and say, “Maiden, your life is too special, I’m afraid I cannot calculate. But, do more good deeds, and your gentleman will come to you.”

Unfortunately, I had also opened my stall a bit late and the sun was setting soon, but I still lack one more customer to reach my fiftieth customer, and more importantly, to regain my pride in front of Hsiao!

Just as I was about to give up, a fat gold ingot landed on my table. I looked up in astonishment, even a small god like me knew that this was an astronomical sum in the mortal realms. 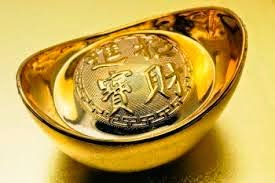 Hsiao’s face beamed down towards me.

I gave a frown and used my hands to make a brushing sign, “Go away, you are blocking my customer flow.”

“I will be your fiftieth customer,” Hsiao said, and sat down elegantly on my stool, as if he was not sitting in a temple street that was starting to close, but sitting in a grand palace hall.

I gave a questioning look at the fat gold ingot and Hsiao said, “Haven’t you heard? A gentleman’s true word is worth a gold ingot.”

Just as I was happily going to take the fat gold ingot, Hsiao blocked the ingot with his white silk fan and smiled at me, “You still have to prove your words can be a gentleman’s true word.”

I huffed and asked to see Hsiao’s palm. The truth was that I couldn’t read palms. I was only a probationary Moon Maiden, and my one skill was looking at people’s hearts. But, I didn’t want to freak Hsiao out.

“So who is my true love?” Hsiao asked.

I looked up into his eyes, those dark eyes which were always so startlingly clear as if he could look through anything, and have looked through everything.

“You do not love anyone,” I said, “Although in your heart, there is a childhood sweetheart.” The third golden thread that needed to be re-connected.

Hsiao’s eyes flickered a mild surprise, “And, will she be my wife?”

A question so simple, that only required me to say “yes”, because of course it needs to be “yes” or I would gain karmic retribution. And yet, I could not answer.

Something rippled across his eyes, and in that moment of doubt, I quickly grabbed the gold ingot, “Thanks for your business, my good gentleman, your generosity for a grand dinner tonight is much appreciated.”

Hsiao’s eyes returned to its normal indifferent calm state, but his lips smiled, “Yes, shall we eat pork today since you didn’t end up a pig head?”

I looked at Hsiao in surprise. Did he have special psychic powers?

In the Temple of Matrimonial Bliss

The Moon God looked up as he saw his Moon Maidens bowing at a grandly dressed male who was storming into his temple. Sigh, is Prince Sun back again to look for Little Moon already?

The Moon God gave a confused look, “Hmm… I thought she said she was headed there, or maybe she went to visit the bird tribes instead, you know how she loves her messenger pigeons…”

Prince Sun arched his eyebrows at the Moon God, “Little Moon was so excited to begin her probationary period here… it’s very unlikely for her to go around visiting gods.”

Prince Sun’s eyes darkened then paused, “She has not gone to the mortal world, has she?”

The Moon God sighed, knowing he could no longer hide the matter. “Xi Yang (夕阳 － the setting sun*), you know it’s her fate…”

Prince Sun leaned back his head and gave a bitter laugh, “Fate is only an excuse used to explain away the powerlessness of gods. I will save her.”

Before the Moon God could reason with Prince Sun, he had already left. The Moon God shook his head, “Little Moon, only one hundred years of life, not only did you trifle with the Emperor in the mortal realms, you also trifled with the Crown Prince in the Heavenly Realms, what should I do as your uncle?”

With my forty-nine taels (I was saving the gold ingot), I wasn’t really confident I would be able to get a decent horse, but Hsiao brought me to a horse trainer he knew and I managed to get a beautiful chestnut horse with fine white hair. It had a white circular birthmark on its forehead like a full moon. I liked it immediately, and even though I suspected that Hsiao had made some secret transaction with the horse trainer, I was shameless enough to accept the horse with my forty-nine taels.

I decided to call it Brown Beauty after Hsiao’s Black Beauty. Hsiao only rolled his eyes slightly at that.

After that, we went to buy some thick clothing in preparation for the eternal winter and snow that fell in Xue. And since I won the bet, Hsiao treated me to a sumptuous dinner.

You would think a god’s alcohol tolerance would be better than a mortal’s, but I failed to make Hsiao drunk again, and was now nursing a throbbing headache in my bed.

I gave a slight start, have I drunk too much?

“Little Moon,” Uncle chuckled, his fingers touched the centre of my brows briefly and I felt a light clarity trickle down from my forehead. I could feel my head clearing up.

Uncle flicked my forehead, “Who asked you to drink so much alcohol?”

I looked downcast for a moment, “I thought I could make Hsiao drunk so that I could ask him personal questions. But who knew that I would get drunk first!”

Uncle chuckled, “You can’t win Hsiao by these little tricks.”

I look at Uncle a little dissatisfied, “Do you think the heavens were a little biased when they made Hsiao?”

Uncle flicked my forehead again, “I saw that one of the three red birthmarks turned black.”

I sighed and rubbed my forehead, “Stop flicking me, Uncle. In this life, Mei Yun’s first love is still alive, so she chose to marry him instead of Hsiao.”

I narrowed my eyes, “That Hsiao also gave some elegant speech about how they have fate but no affinity.”

I leaned towards Uncle, “I’m worried I don’t have what it takes to matchmake Hsiao with the rest of the two women. Connecting hearts is turning out to be much harder than I thought it would.”

Uncle stroke my head, “Haven’t you always wanted to be a Moon Maiden since you were young? You are not giving up now, are you?”

I shook my head and smiled, “No. I will make Hsiao marry the rest of the two women even if I have to drag him to the altar!”

Uncle gave a small shudder, “Anyway, I came down to tell you that Prince Sun will be coming to find you soon. I managed to speak to the Jade Emperor to command him to go take care of some stray monsters, but I doubt that will delay him for long. It’s good that you are heading to the eternal winter in Xue, there’s hardly any sunlight there so it’s harder for Prince Sun to detect you.”

I looked strangely at Uncle, “What’s wrong with Xi Yang finding me?”

Uncle sighed, “And you call yourself a matchmaker of love?”

I paused, “Prince Sun is just my childhood friend. And, regardless of that, won’t Prince Sun be able to help me?”

Uncle shook his head, “Listen to me, Little Moon, avoid Prince Sun, he will only make matters worse. This is something you have to do yourself.”

I nodded. Uncle smiled. Under the glow of the moon, his silver hair seemed to especially glisten, and slowly he vanished, leaving only the moonlight.


I was thinking about Prince Sun's name and with some encouragement from Moonblossom, I have decided on Xi Yang (夕阳) which means the sunset, and this comes from a line of poetry I really like, 《夕阳无限好，只是近黄昏》- there are quite a few interpretations of this, but it is commonly understood as, the sunset is so beautiful, but this beauty is so brief.