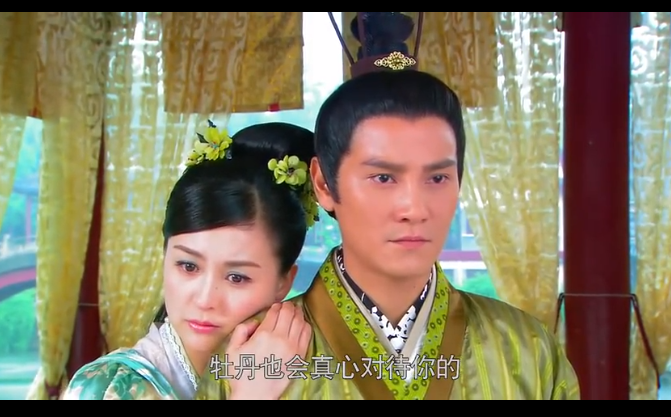 In Episode 17, Mu Dan tries her best to win herself back into Zhan Feng's heart. Will she succeed? 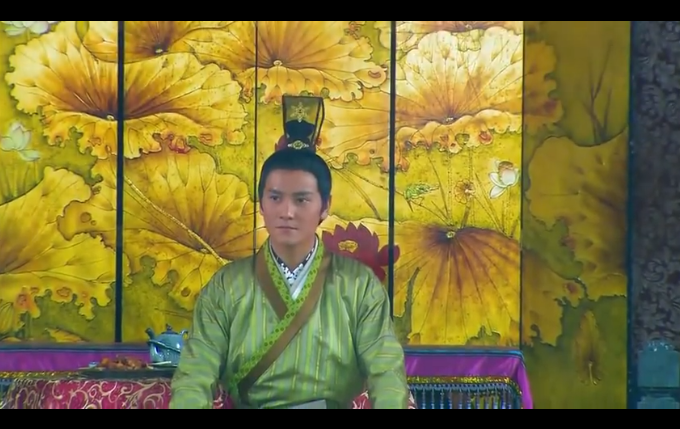 Episode 18 opens with Zhan Feng sitting at the pavillion Mu Dan had played at yesterday, he appears to be in deep thought. What will he decide? To go after Mu Dan again? (*insert horrified face*) 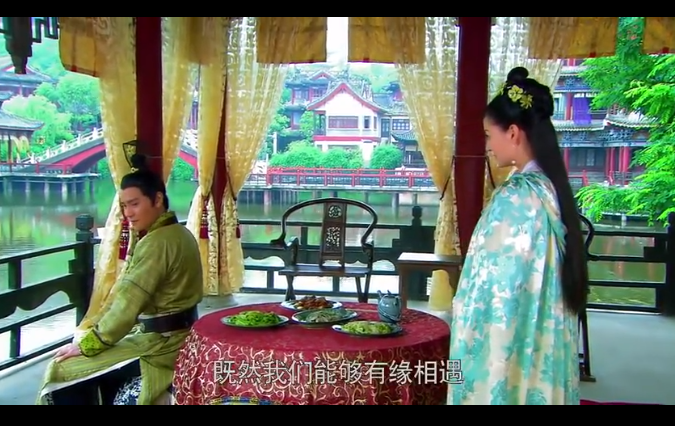 Mu Dan appears and acts surprised to see the Crown Prince. Zhan Feng smiles and says, "Since we have the fate to meet today, why don't we have a good talk?"

Mu Dan coyly asks, "What will we talk about?" 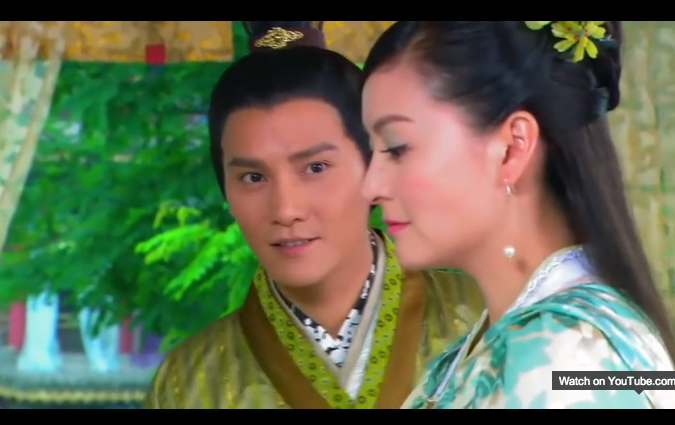 Zhan Feng approaches Mu Dan with a playful smile on his face, "Doesn't your heart know?" 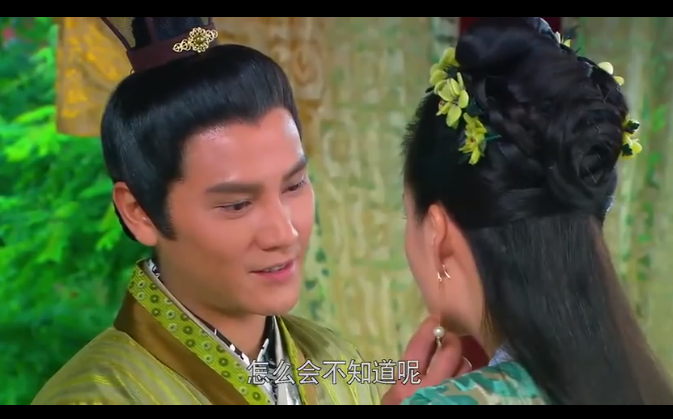 Zhan Feng, with his flirting powers switched to the maximum, touches her cheek.

Mu Dan moves back and says, "Oh no, this is not appropriate."

Zhan Feng says, "I have offended my lady?"

Mu Dan with a soft smile on her lips says, "I'm a lady of fine upbringing."

Mu Dan asks for them to sit down and have a heart to heart chat. Zhan Feng says they have nothing to talk about. Mu Dan pleads saying she knows Zhan Feng must be angry at her. 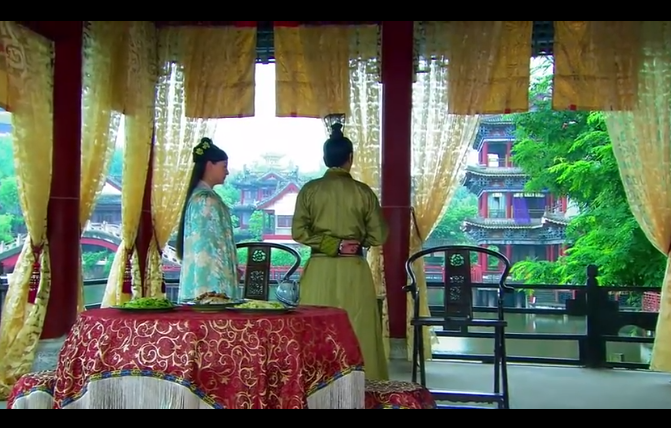 Zhan Feng remains silent. Mu Dan goes on to say that although she's the Prime Minister's daughter, in many ways, her heart is just like any ordinary girl, except she is not free. Her betrothal to Zhang Zhen was a promise made by her father. 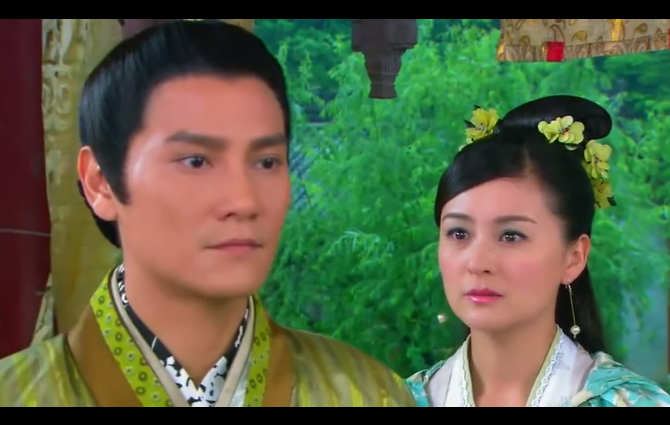 With a sinister smile that Mu Dan cannot see, Zhan Feng says, "I am very willing."

Mu Dan is so happy, she looks up at heaven and smiles gleefully, "I knew the power of love could overcome everything."

Mu Dan grabs Zhan Feng and says, "Bring me to the Empress Dowager!" (Oops, lady you are moving too fast.) 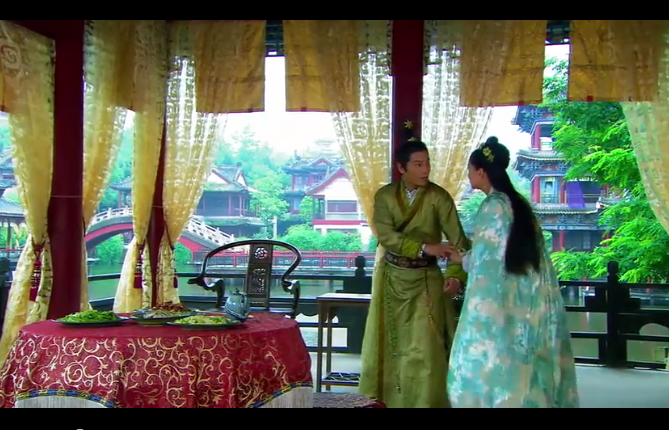 Zhan Feng asks, "What has our matter got to do with the Empress Dowager?"

Mu Dan pouts, "You mean your heart is not true?"

Zhan Feng scoffs, "What is a true heart?" 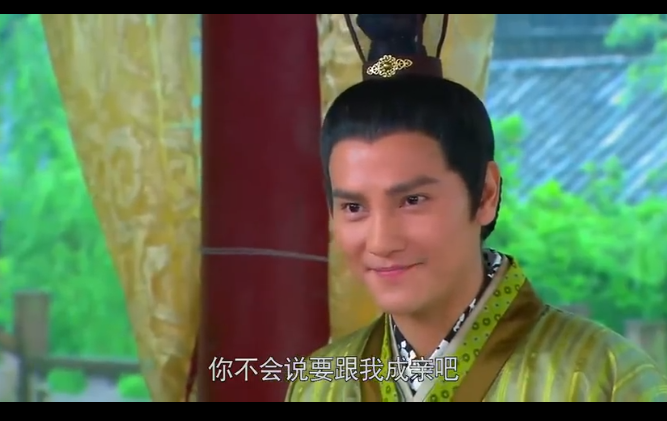 Zhan Feng laughs, "Marriage? You are not saying marriage with me, are you?"

Mu Dan rushes towards Zhan Feng, "Why not?"

Mu Dan says, "I know that you are the great Crown Prince and your marriage is no small matter. But, don't worry, Mu Dan is prepared to wait for you."

Zhan Feng smiles, "I'm afraid you are mistaken. I am only here today to hear a song." 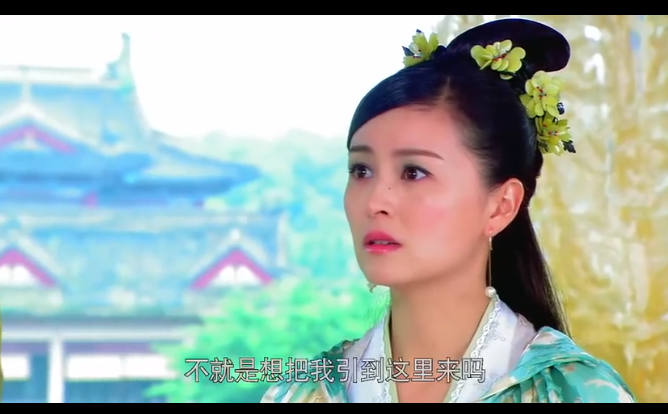 Mu Dan's face fell, "You were teasing me?"

The smile drops from Zhan Feng's face and he turns cold, "You are the one who is teasing me. You play a song at the place I visit, aren't you trying to attract me here? You have succeeded. I am here today. At least you have not wasted your efforts."

Mu Dan is furious, "Do you know who is before you? The prettiest lady in the whole capital! Do you know how many men want to marry me in the capital? I tell you, if you don't marry me, you can forget about having me!" 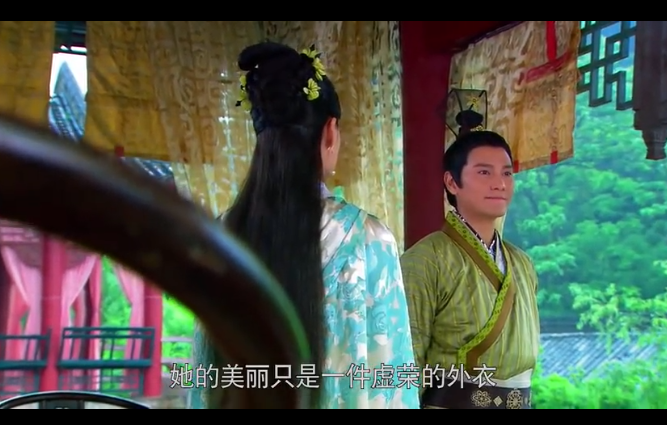 Zhan Feng smiles, "Then let me tell you, I am only here for fun. A woman to me, her beauty is only a false outer cover. I can find fun everywhere. Why should I spend so much time on you?"

Mu Dan's mouth drops, "You are treating me like the other women? I, Mu Dan, will always get what I want."

Zhan Feng says, "I know what you want. Let me tell you, what I don't want, even the Heavens cannot force me to take."

Mu Dan pleads, "Crown Prince, forgive me. I was speaking nonsense just now." She leans on his shoulder, "If you treat me sincerely, I will also treat you sincerely."

Zhan Feng looks like he is in pain and is struggling to come to a decision. 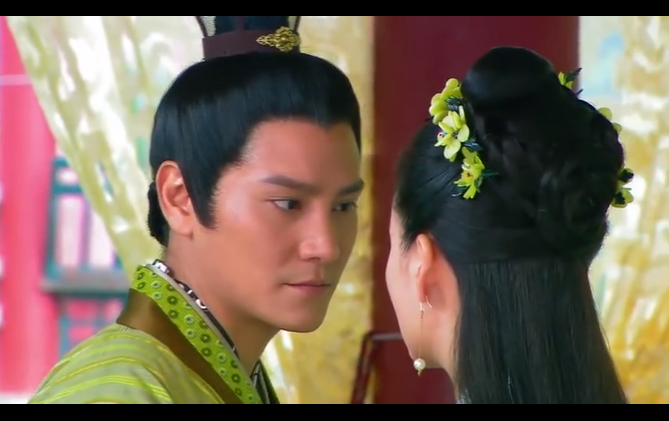 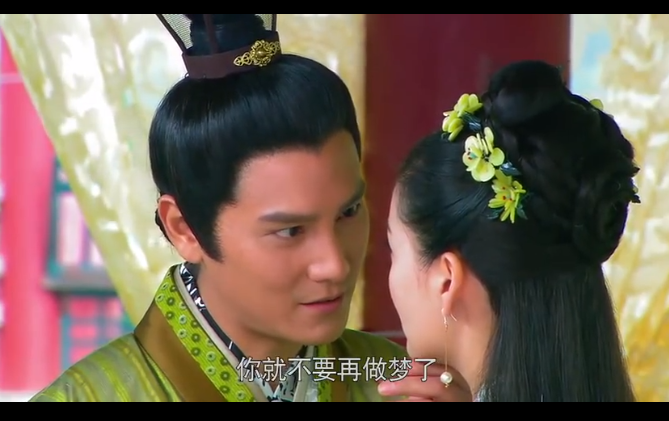 Zhan Feng turns around. At first he looks at Mu Dan gently, then his gaze hardens, "Let me tell you, you don't have to dream anymore." Mu Dan smiles.

Zhan Feng says, "To me, you are the most ugly."

He walks off and never turns back.

Ok, this scene totally kicked ass! I loved it so much and practically translated all the dialogue. I think this really shows Zhan Feng's character, he is a total player and loves beauty, but he redeems himself by always prizing sincerity and a person's character. Mu Dan betrayed his sworn brother, Zhang Zhen, and no matter how pretty she is or how sweet she tries to be, Zhan Feng cannot appreciate her false outer cover anymore.

Later in Episodes 18 to 20, there is a ridiculous sub-plot of the assassin Mu Dan's father hired to kill Zhang Zhen's father, he comes back and kidnaps Mu Dan. For what reason, I am not sure, maybe for money? Anyway, Mu Dan accidentally kills the assassin, who is the only one who can attest to the fact that Mu Dan's father hired someone to kill Zhang Zhen's father. Because Zhang Zhen told the Emperor that Mu Dan's father murdered his father but has no evidence, he is put to jail. The only one who can help him now is Mu Dan...... Zhan Feng goes to Mu Dan and tells her to tell the truth, if not the truth will come anyway, and she will have committed the sin of lying to the Emperor. So, Mu Dan does tell the truth, but this comes at great cost as her father is executed and her mother commits suicide in grief. Somehow, deep in the mountains, Mu Dan saves a fox spirit. Yes, this plot will continue to astound you. Haha, but with that Mu Dan leaves our screens for a while: 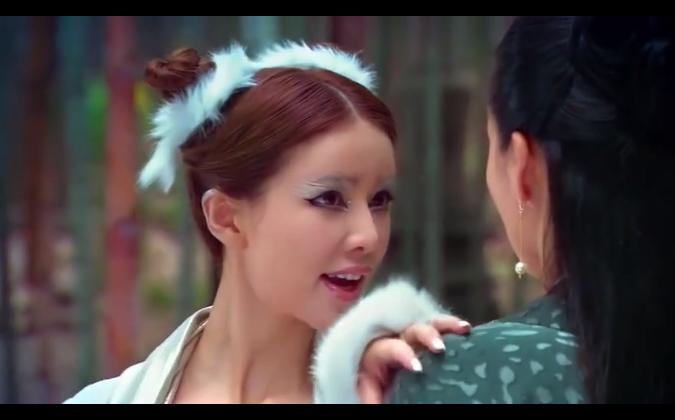 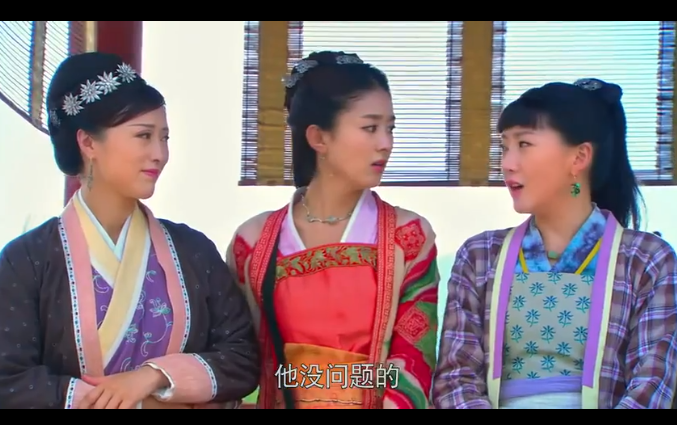 In episode 21, Zhang Zhen finally takes the imperial examination. Auntie Lan, Hong Ling and Tang Xin wait anxiously, especially Hong Ling who is surprised at the number of people who are attending the examination. When Zhang Zhen comes out, he assures them he did his best for the exams. 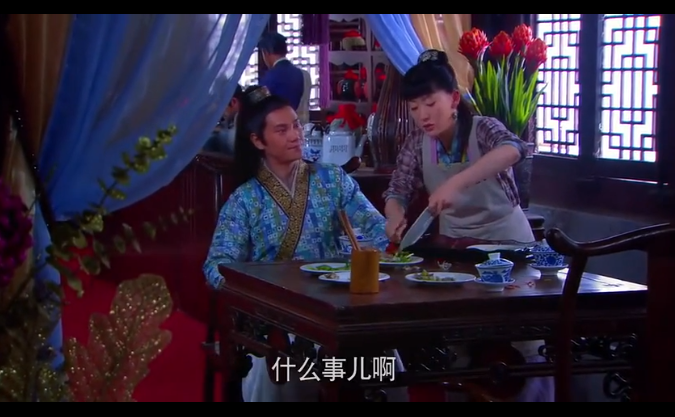 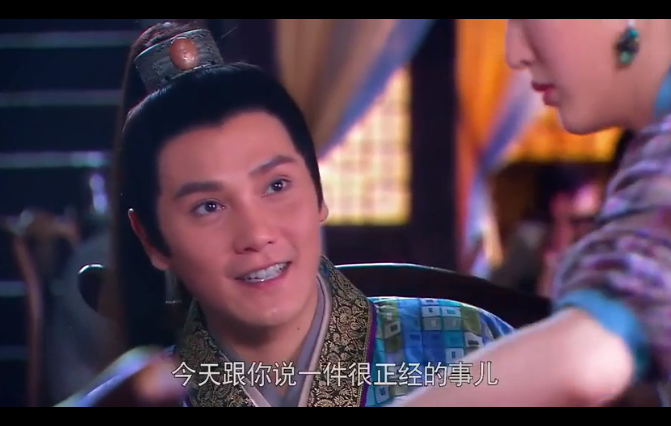 Zhan Feng visits Tang Xin at the coffee house she works at. He smiles happily at her and says he has come here on an important matter. Tang Xin doesn't really bother about Zhan Feng as she cleans up the table.

"You should get married!" Zhan Feng says this standing up with glee.

Tang Xin starts to laugh. Then she says, "If you are trying to say a joke, you have succeeded, I have laughed. But if you are serious, then you are thinking too much." 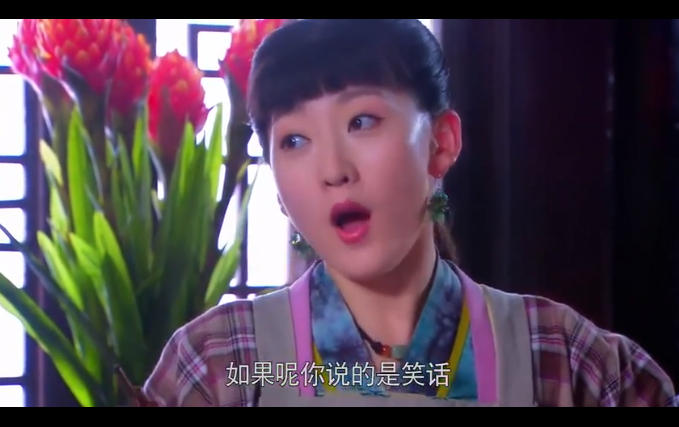 Tang Xin shakes her head, "This is the capital. Everyone wants a refined classy lady."

Zhan Feng smiles, "You aren't that bad. At least you have one good point. You are chivalrous."

Tang Xin smiles, "This is not simple, you are saying good things about me."

He brings her to a silk shop. 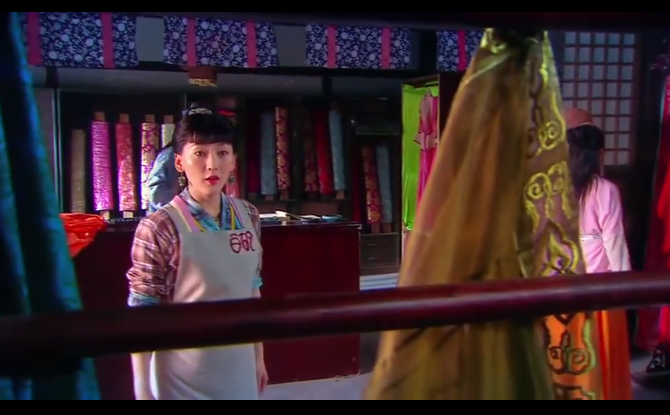 Yes, my dear readers, we are going to get a PRETTY WOMAN sequence in ancient c drama! :) *Squeals* Ok, I have to save it for the next part!