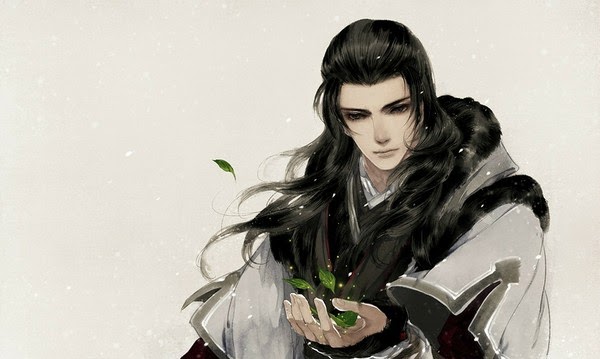 I translate this c-novel from the internet version, so when one server is down, I go to another one, so sometimes there are problems with the names as some sites use different versions. I usually follow the douban one.

I've said in the review and in the earlier chapters that the other male lead is called Qi Feng Xiang, when I translated the first scene when he introduces himself to Su Li Li, the internet version I followed had him introduce himself as Deng Feng Xiang so I was under the misconception that he had not given his real name. However, I've realised after looking at another internet version and checking with douban again that he had used Qi Feng Xiang from the first time he met Su Li Li. I'm sorry for the confusion, but I've edited the past Scenes to be consistent!

This scene is one of the most important scenes in the book, and I liked that it talked about the first time Qi Feng Xiang met Mu Tou. One of my favourite parts of this novel is that the author developed a strange kind of friendship and rivalry between our two outstanding male leads.

Scene 9: A Promise to Return

There was not a single ripple in Mu Tou's eyes, as if that name belonged to a stranger, and only existed in a faraway time. After half a moment, he coldly opened his mouth but only said simply, "Don't bother her."

After that, he went into the building.

They exchanged ten plus strokes, and Qi Feng Xiang suddenly moved back, he smiled as if he was a wild beast that have smelled his prey, "We have not met for three years, I almost could not recognise you, your bad temper has not changed, but your martial arts have not fallen behind."

Mu Tou retracted his hand, his actions were calm and controlled, he said coldly, "You cannot beat me."

His cloth robes flew in the wind, but his figure was firm and tall, there was a trace of a rebellious attitude.

Qi Feng Xiang conceded, "Indeed, I used to be able to draw with you, but now I'm really not your competitor."

"So you better remember what I had said," After Mu Tou said this, he flicked up his robes, and turned around towards the building.

Qi Feng Xiang cried, "I will arrange to meet you again to speak!"

Mu Tou seemed to have tossed Qi Feng Xiang's words aside without care and quickly went up the building.

Qi Feng Xiang watched as Mu Tou's figure disappeared, he watched with some sadness and some admiration. He turned towards city walls far out under the night sky, it had a gentle curve, as if hinting of the fall of something great and ancient.

Three years ago, in the military camp at You Zhou, the head of the army, General Qi Huang Cheng hung a purplish gold embroidered silk cloth on the highest platform in the military camp, he told the visiting Lin Jiang King, "Today, let's see the elites of each of our camp compete."

That year, Qi Feng Xiang was twenty years old and already the head of the right army, he immediately went forth and quickly battled until he reached the highest platform.

A young boy not more than twelve or thirteen suddenly burst forth from the centre, every stance of his was incredible and accurate, in Qi Feng Xiang's entire life, this was an opponent he had rarely encountered.

After fighting for one full hour, they had caused the hanging embroidered cloth to be torn into two, each one had half a piece, the whole crowd cheered.

Qi Feng Xiang passed this half piece of embroidered silk to Qi Huan Cheng, "May General Father forgive me, your son is incompetent."

Qi Huan Cheng looked at the young boy who was as good as his son, then said to the Lin Jiang King, "Your son is truly a young and extraordinary man, he is a swift dragon and young phoenix, in no time, he will be above my son."

The Lin Jiang King stroke his beard and smiled genially, "The General is too kind."

Jiang Qiu Di had a powerful aura but he was reserved, he only placed the silk piece on the table and silently stood aside.

At this moment, both of them had exchanged glances, in their hearts grew mutual appreciation.

After half a year, the Lin Jiang King was denounced as a traitor, but in truth he was forced to rebel. You Zhou watched during this battle and did not participate, after General Qi Huan Cheng heard of Lin Jiang King's loss, he lightly sighed, "If the Lin Jiang King knew of today's fate, would he have left the monastery and stepped into the secular world."

Qi Feng Xiang thought of the boy who had taken half of the purplish gold embroidered silk cloth, his eyes so bright that it pierced into the heart - Jiang Qiu Di.

Who would have thought after three years, he would see him wearing normal cloth robes, sitting in a common wine house, with no weapons on him, and no gold. Seeing him like this, Qi Feng Xiang couldn't help feel the grip of a passionate ambition but also a strange melancholy at the swiftness in change of fortunes, these feelings mixed in his heart. After reflecting quietly for a while, he shook his head and smiled, "This child, if I wanted to beat you, I don't necessarily have to use my own hands."

When all the dishes have been served on Su Li Li's table, Mu Tou had also returned and sat down. He saw the situation and furrowed his brows, "Why so many?"

Su Li Li picked up her chopsticks and replied, "The person is treating us, if we can't finish, we can take these away, save me from cooking for two days."

Mu Tou did not move his chopsticks, "How did you know him?"

Su Li Li tried to fudge the issue, "Who said I knew him..." when she couldn't deny it any longer, she started to stutter then said, "Fine, I know him, it's the ghost I had attracted the last time I tomb raided."

As she spoke, she took a vegetarian leg meat made from yam and placed it in Mu Tou's bowl. Mu Tou looked at this leg that did not look like leg, meat that did not look like meat, his brows continued to be furrowed, "Qi Feng Xiang is the third son of General Qi Huan Chen from You Zhou, he is more skilled than his father and brothers. What is most frightening is that his heart and mind is very deep and complicated, his actions brutal and cruel."

Mu Tou still did not eat, he chided her, "Of all people to trouble, you troubled him! You better not think of even leaving your skull behind."

Su Li Li lightly placed down her chopsticks, she was silent for half a moment. As if tired, she said, "Mu Tou, can we not discuss this? Today is my birthday, accompany me to eat a good meal."

Mu Tou gazed at her and was silent for a half a moment, he replied "Yes", he reached out for the white porcelain wine jug and filled up two wine cups till they were about eighty percent full. Su Li Li raised the cup, tossed back her head and finished it. Mu Tou used his chopsticks to pick up the vegetarian chicken leg and silently ate.

Su Li Li held the cup, one hand holding up her head, as if she was a little drunk, she gazed at him and smiled, "I have not celebrated my birthday like this for many years, to have such good food to eat, to have someone who is truly good to me accompanying me."

She said this slightly sadly, but Mu Tou raised his head and laughed, "It is quite delicious, I'm only afraid you won't be able to cook as well."

Su Li Li did not dwell on her sadness, she picked up her chopsticks and replied, "Then I must also try these."

The two of them happily tasted each dish, Su Li Li would savour the wine in each cup and drink happily, telling Mu Tou about interesting things she knew. Normally, people would become noisier as they drank wine, but the more Su Li Li drank, the quieter she got, finally she only held the cup and just smiled.

After the two jugs of wine were finished, Mu Tou said, "Stop drinking, eat the food."

Mu Tou passed Su Li Li another bowl of soup, he pointed out the dishes and commented on their taste, Su Li Li nodded in agreement, and they ate till it was late into the night.

The shop owner said with some difficulty, "These two guests, the shop is going to close, why don't both of you come again tomorrow."

Su Li Li generously placed the huge note Qi Feng Xiang had left behind on the table, "Take this, keep the change."

When she stood up, her body swayed a little, but she immediately headed down the stairs. Mu Tou quickly followed behind her. Su Li Li was suspicious, why though the stairs of the building were uneven, but she could walk down so steadily?

When they reached the streets, there was only the remnant glows from the lanterns outside, there was no one else around, it was quiet beside the river. Mu Tou saw that she was walking closer and closer to the river and was afraid she would fall into the river, he reached out his hand to pull her in the direction of home. Su Li Li let him pull her along, suddenly she tossed his hand aside, "Why are you pulling me?"

"You are going to fall into the river," Mu Tou said helplessly.

"Even without you, I can still walk home."

"Since I am here, for the time being I can help you find the way."

Su Li Li lifted up her head and looked at him from the side of both of her eyes, she coldly laughed, "I am the ancient vines in the wilderness, you are the sea gull in the sky that accidentally got into an unlucky situation and landed here, don't tell me you are going to get hanged to death on this tree!"

Mu Tou was dazed, Su Li Li left him behind without even a turn of her head and continued to walk forward.

After walking five steps, she felt her waist tightened, a force pulled her back a step, she landed into a warm and gentle embrace. Mu Tou's voice was at her ear, it contained determination and hardness, "If I can fly away, I can also fly back!"*

Su Li Li wanted to laugh at first, but her eyes moistened instead.

He held her forcefully in his arms, his face leaned on her hair, she could feel this gentle breathing seep through her hair, touch her skin. Su Li LI turned around and buried her face in his embrace.

A hug was originally an expression of consolation, but in this quiet empty space next to the river, it became a sudden promise.

*One of the classic lines and moment in the novel.

Comment: Ah, what else can I say? The harder and more life-threatening a situation, the less a person can say or dare to promise. So all he says is "if I can fly away, I can also fly back!"

Will the ancient vine in the wilderness wait for a seagull in the sky? Will something else swoop in?