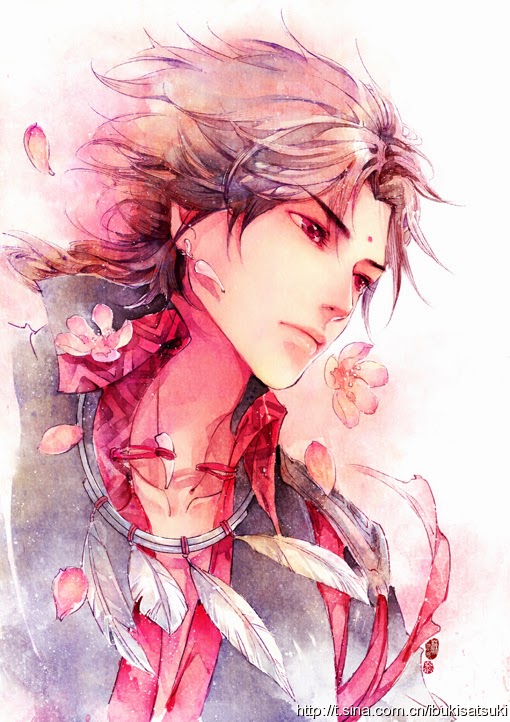 I did not know why translating Chapter 8 was more painstaking than Chapter 7, but like the vines that entwine itself around the oak tree, through the sun and rain, the details of this chapter has been irrevocably twined round my own heart. I really enjoyed translating Chapter 8, and excited to see us move into Chapter 9... where perhaps my ultimate favourite character appears. But for now, where lies A'Heng and Chi You's fate?

Without Ah Bi as a ride, A'Heng's speed was not fast, but Lie Yang was not as impatient as before, usually swirling at the top of her head, flying there and back.

A'Heng kept using all her divine energy, first to fasten her pace, and also to let the poison spread through her whole body. One person one bird rushed a day's journey, and left Jiu Li village far behind.

In the evening, as the setting sun turned the whole sky an orangey-red, A'Heng's face became whiter and whiter, her heartbeat also became slower and slower, it seemed as if she was not able to catch her breath.

In a forest, she sat up.

Lie Yang landed behind her, anxiously looking at her without understanding, he released squawking sounds, it frightened all the birds in the forest to land on the ground.

A'Heng tore a piece of her sleeve, and twined it round Lie Yang's leg, "Go to Shen Nong mountain and find Yun Sang." She was panting until she almost could not speak, her body leaned against the big tree, her fingers pointing at the sky.

Lie Yang arched back his head and gave a few loud cries towards the sky, the surrounding birds all walked over, and started to surround A'Heng. Lie Yang stretched out his wings and flew up to the sky, he was fast as lightning, in a blink of an eye he vanished.

They were already within the Shen Nong area, with Lie Yang's speed, he should be able to reach very quickly. Even if other people saw the broken sleeve, they would not be able to understand its meaning, not be able to find out that Chi You's life was in danger, but Yun Sang once learned the arts from her mother, she was very familiar with the cloth her mother weaved, once she saw it she will know that A'Heng needed help, she would definitely rush here.

A'Heng could not take it anymore, she slowly closed her eyes.

Under the setting sun, in this remote forest, the birds that were compelled by Lie Yang, one by one squeezed together, they became a multi-coloured hundred bird boundary, protecting A'Heng in the centre.*

A'Heng's eyes saw a blurry golden light, her heart floated again and again images of Chi You, and the letters that were sent in the sixty years, her memory was so good it shocked her, so many letters, but she actually remembered them all.

"Passing the small hills, the peach blossom flowers ablaze, burning over both shores, a girl starching clothes by the river, I thought of you again."

A'Heng gradually loss consciousness, her lips upturned, it carried a smile, the last image in her heart, was peaceful and beautiful; the green waters by the small hills were like a jade belt, it curved and bent, Chi You's figure in the red robe, at the head of the boat, flowing down the river, the many protruding shores, they were all covered with peach blossom flowers, the sweet aroma like the sea, the petals falling magnificently......

When A'Heng was waiting wholeheartedly for Yun Sang to rush here, she had no idea Yun Sang was not in the Shen Nong country at the moment.

After Yun Sang had bade farewell to Shao Hao and A'Heng in the remote valley, she had disguised herself and rushed to Gao Xing.

She had been internally struggling with her worries, but had never thought of what Nuo Nai was feeling, since Nuo Nai was an official, as a friend of Shao Hao, he actually spent one rainy night with Shao Hao's wife, Gao Xing's rules of propriety is so strict, Nuo Nai's heart is so pure, after that night, his heart must have been filled with how much helplessness, fear, shame and guilt?

Helpless with one's uncontrollable emotions, fearful that snatching the wife from the prince will bring disaster to his tribe, ashamed at one's despicableness, guilt at betraying a friend. Perhaps it was only in drowning himself in guilty pleasures, in debasing one's self that he could face Shao Hao, but Shao Hao did not know of this, in fact he turned around and was concerned and worried about him, advised him to protect his body and honour, every care and concern showed by Shao Hao was a torture for Nuo Nai, making Nuo Nai become even more disgusted with himself.

At their meeting on Jade Mountain, Yun Sang was only curious, she never thought that all these would one day happen, that her unintentional acts would lead Yan Long to use him, to use Nuo Nai, use Nuo Nai's tribe, and even brought danger to Shao Hao's future kingship.

Yun Sang hated herself deeply, since she was born in a royal family, from young to now, she had never taken a wrong step, but on that day, at the Ao Tu inn, they had met, their hearts had stirred, she had forgotten her own identity, just like a normal girl, she was rash and reckless, she was insecure, proudly she had gone to test, to go closer.

So alone she headed to Gao Xing, she did not know if she was able to meet Nuo Nai who was imprisoned in the sky jail, even more she did not know once she truthfully told Nuo Nai her identity, how would Nuo Nai look at her, maybe he will never forgive her.

But, she must see Nuo Nai.

In the dark night, each star was like a precious stone that lit up the sky, shining and twinkling, it was beyond beautiful. No matter a remote region, or a grand palace, no matter if one was at Shen Nong or Gao Xing, even at different places, they all had the same dark sky, the same stars.

It was silent, the sky full of stars, in the midst of the protection of a hundred birds, A'Heng's lips carrying a light smile, she had fainted and was sleeping, her life was quickly disappearing in this unconscious sleep.

In a faraway palace, in a balcony, Shao Hao's face that carried a few threads of tiredness was holding a book, he walked to the window. He carried up a gourd of wine and slowly drank the wine, he suddenly remembered something, he took out a silk handkerchief from his robes, on top was the recipe for the female wine that A'Heng had wrote for him. He lowered his head and gazed, then he lifted his head towards the sky, it was full of stars, as if the hundreds of families in the mortal realm had lit up their lamps, he did not know if A'Heng was also by another lamp, listening to more stories. Unconsciously, his weariness faded away, Shao Hao's lips carried a faint smile.

In the heavily guarded sky prison, Yun Sang's face wore a mask, the mask was weaved from a human face silkworm, it was extremely light and changed her appearance into a normal young girl. Because this disguise was not created using divine energy, even if she met a god that had a divine energy much greater than hers, he would not be able to see through her disguise. Yun Sang lifted her head to the sky, coincidentally a falling star flew across the sky, she gazed at the stars and silently prayed.

After calming her heart, her left hand held a jade kettle, it was filled with water, her right hand held a long knife. Yun Sang put a medicinal pill that the Yan Emperor had given her to use when she needed to escape from danger in the kettle, a mist that could cloud the heart started to emanate from the kettle, it covered her body, she held the sword and entered the sky jail.

In the grand and solemn tall mountains, the wind lightly breezed past, the monster bone wind-chimes that surrounded the sacrificial stage rang "ding ding dang dang", the sound was soft and unceasing, as if someone was singing a peaceful lullaby for another to sleep.

The Witch King was leaning on a stone back and suppressing his yawns, although Ah Bi looked like he was sleeping, his two sharp fox ears were on alert.

A long time later, Chi You gradually opened his eyes, he gazed at the starry night, he slowly lifted his hands, he saw the knife mark on his palm, he gradually understood what had happened in his heart, with one breath of air, he forcefully pushed himself up and sat, Ah Bi immediately stood up.

"Ah Bi, we need to go to Shen Nong mountain," Chi You sat on Ah Bi's back. The Witch King was shocked awake, he anxiously grabbed Chi You's robes, "Your poison has not been cured, you cannot ride."

"Which generation Witch King are you? You dare to tell me what I should do?" Chi You's gaze was as cool and cruel as a wild beast, as if he had no trace of humanity, the Witch King fearfully knelt down, he did not dare to lift his head.

Chi You patted Ah Bi, Ah Bi immediately flew up, one person one beast disappeared in the night sky**.

* I found the protection of the 100 birds compelled by Lie Yang absolutely adorable.
** I love the parallel of "one person one bird" and "one person one beast" - Chi You and A'Heng really are mirror complements of each other.

Comment: Chapter 8 was a quiet chapter that was needed for A'Heng to process all that has happened to her and what were the exact nature of her feelings for Chi You, feelings that she never thought she could possess or should possess since she had been betrothed since young to Shao Hao.

To be honest, I could never get into Yun Sang's relationship with Nuo Nai, which explains why I generally summarised it and not translated it - although this time it fitted so beautifully with all the action in Chapter 8 that I translated it too. Yun Sang's self-hatred, I do think she definitely deserved it, she had acted selfishly and thoughtlessly. I don't know if Tong Hua had set up Yun Sang and Nuo Nai's as a parallel couple to A'Heng and Chi You - since Yun Sang and Nuo Nai also started with a mistaken identity. But there is an innocence to A'Heng and Chi You's relationship which I liked a lot and which I don't find present in Nuo Nai and Yun Sang.

At the end of Chapter 8, there is so much action going on! Whom will go to whom?