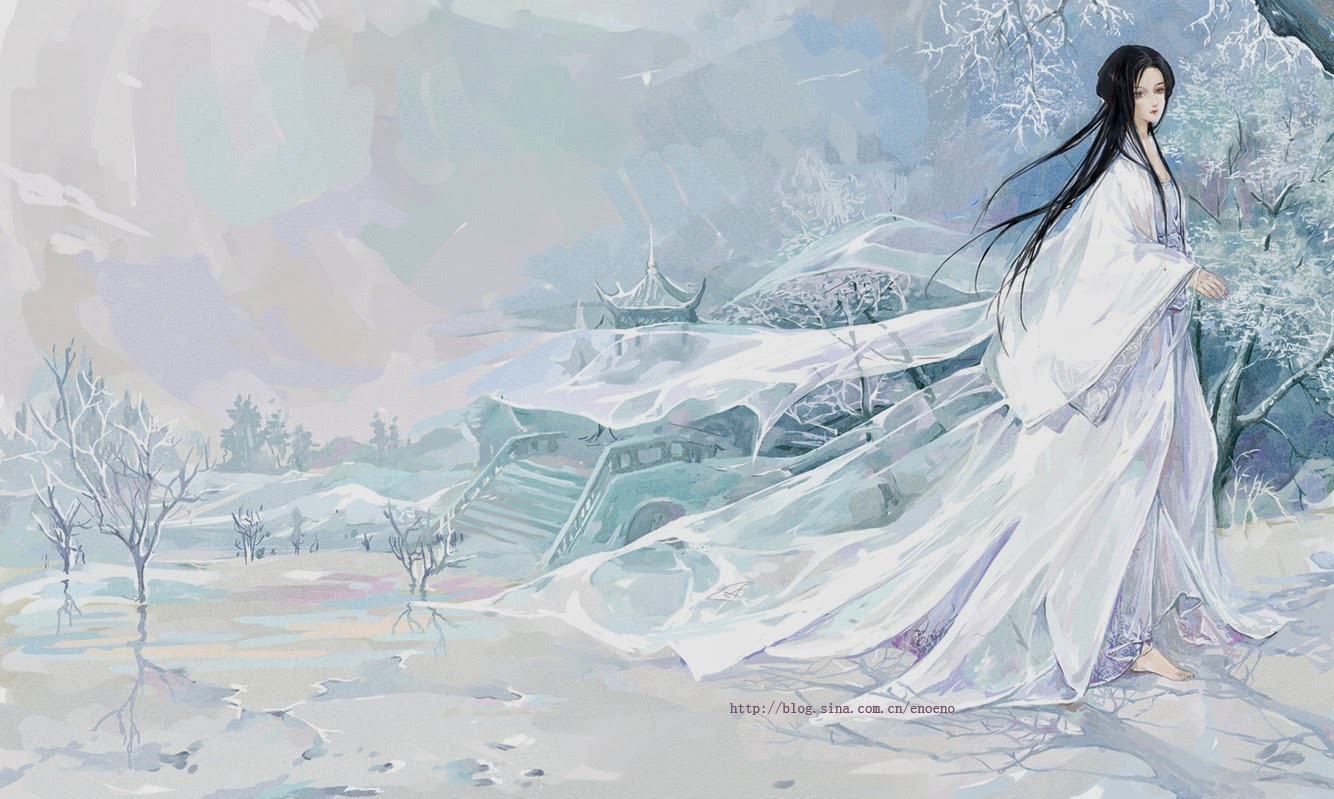 Chapter 12 is such a joy to translate. Not only do we get to see all the characters play their parts, dear readers, we finally get to know Jin Mi's true self! And, I must say it does not disappoint.

Chapter 12: The Flower of The Descending Frost (Part 3 of 4)

Water God Daddy took my hand and led me into the palace. In the middle of the palace was a god who was playing a musical instrument with his back to us, surrounding this god were rows of gods appreciating his music.

"The Water God has come just in time, I've heard that the Water God is well-versed in music, today I have a special instrument, it's just nice that the Water God can give me his opinions on it..." The Heavenly Emperor excitedly said, when he saw me behind Water God Daddy's figure, his expression immediately became confused.

The Heavenly Empress was sitting at the left, she had turned to give a smile, but when she saw me, the ends of her eyes lengthened and her face stretched quite a far bit.

Besides the god who was playing the musical instrument with his back to us, the rest of the gods were staring at me, I must say that they rather lack etiquette.

The Water God's dark eyes carried an unchangeable frostiness in them as they looked at the Heavenly Emperor, but both of his hands tightened at the ends of his robes, his fingertips turned white.

The Heavenly Emperor was suspicious, the Heavenly Empress was angry, my daddy was furious. In the midst of the music, the three of them looked at each other without words.

Like a deep pool of water, the melancholic melody of the autumn water falling on the ground swept through the hall, the melody became more anxious as it went on, as if war was starting, the notes became higher, and at its furious peak, a string broke. As if a spell has been broken, in the silence, all the gods in the hall regained their awareness.

The player carried his musical instrument and rose, with a sweep of his black tinged with red robes, a proud and tall figure turned around. It turns out it was Phoenix. But his proud eyes swept across my face like a mere drop of water, sweeping by without a trace.

Some god attendants took the musical instrument from Phoenix's hands, he flicked his robes and sat on the right of the Heavenly Emperor, his expression indifferent.

"Ke!*"  The Heavenly Emperor awkwardly coughed as he regained his awareness, "Why has the great god come today? Perhaps the gods here today should first leave, and return another day to appreciate the music."

"Wait!" Water God Daddy waved his hand to stop the group of gods who were about to leave, he stared at the Heavenly Emperor, his dark gaze appeared as if he wanted to uncover everything, the Heavenly Emperor's expression flickered, "Nothing very big, I just wanted to ask the Heavenly Emperor to take back the five thousand years of "yang" energy in my daughter's body - it conflicts with her internal essence."

The Heavenly Empress looked shocked, Phoenix sharply lifted his head. The Heavenly Emperor looked on in disbelief, "Your daughter... unless... Jin Mi..."

"Indeed," Dad's eyes were piercing, he said forcefully, "Jin Mi is the daughter of Zi Fen and me."

Phoenix's eyes glimmered, in that moment, it was as if thousands of flowers were blooming and reviving in spring.** I always knew his mood swung irrationally from happiness to anger, so I was used to it, I did not bother to delve into why he suddenly became happy.

The group of gods were shocked into silence, those who were trying to peek at me through the light were now outwardly staring at me, God Er Lang was sitting closest to me, he had an extra eye on his forehead, his three eyes which were staring at me caused me to feel uneasy.

The Heavenly Emperor seemed to be so affected he was a bit dizzy, he looked confused and disorientated, I did not know what he was thinking.

After the Heavenly Empress was surprised, she had a moment of uneasiness which disappeared quickly, she opened her mouth and smiled, "Is the Water God mistaken? The real self of this sprite is a grape stem, every god saw it that day, to say that she is the daughter of the Water God and the Flower Goddess seems to be a bit preposterous. Won't the Water God agree?"

The Heavenly Emperor was dazed, he coughed twice. The Heavenly Empress' face changed, "It was heaven's fate that decreed her passing, how can the Water God not know? In the Annals of the Six Realms, it is recorded that the Flower Goddess was once a lotus in front of the Buddha, it was her karmic fate to disappear. But the Water God who had mistakenly entered the Three Islands and Ten Continents had accidentally saved her, had gone against heaven, but finally there must be punishment, hence the Flower Goddess's life ended as karmic retribution from her own powers. This is well known throughout the six realms." 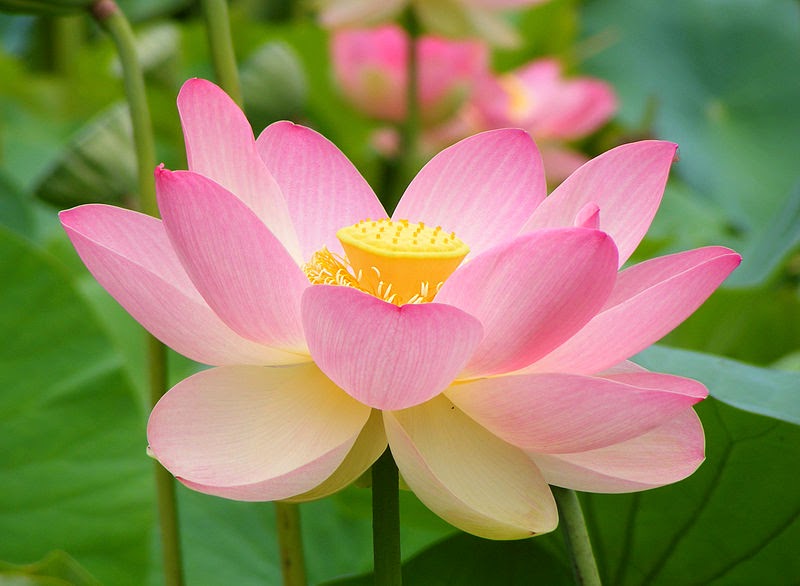 With huge gravity, Daddy closed his eyes, when he opened them again it was filled with a cold smile, "I only know that in the Annals of the Six Realms, there is a fire that can destroy a divine essence, the Red Lotus Fire is the strongest, there are five types, the poison fire is the most lethal, it can burn and incinerate a heavenly soul within within, and this is being controlled by the Fire God! That year, Zi Fen..."

"The Night Deity arrives," It was announced by an attendant in the hall, this person coincidentally interrupted my father's words.

Night calmly walked into the palace, he was neither fast nor slow, as he stood next to me it was as if he carried the night wind that breezed over the lake, "Night greets his Royal Father, greets the Heavenly Empress," He turned to my daddy, "I greet the great Water God." His gaze lightly brushed by me, it brought up a quiet ripple, which quickly vanished just as it rose.

At first the Heavenly Empress had tightened her brows and lips and appeared extremely anxious, as if she was afraid of what my dad would have said, but now she calmed down a little, she let out a sigh of relief, as if she had never been so happy to see Night, she warmly said, "The First Prince need not be so ceremonious."

"I heard that royal father had received a very precious musical instrument, I had to hang the stars in the night sky so I was late, I don't know if I have missed the chance to enjoy the music," So it turns out Night has rushed here to listen to the musical instrument.

"Pity pity, I'm afraid Night has missed the chance," Phoenix reached out his hand and plucked at the musical instrument, the music was good but seemed to lack something, "The string broke."

Night gently smiled, he lowered his head and lightly shook it, as if he was extremely regretful, "It seems as if I have really missed it, this shall add to my list of regrets in life. I only hope that what I lose at sunrise, I can gain at sunset."***

The Heavenly Emperor replied, his heart not fully in it, "Does the Water God know what is Jin Mi's real self? If the Water God does not tell, how can I resolve this?" It seemed like he still held out a trace of hope.

Daddy was silent for a moment, all the gods waited with bated breath for the answer, I myself couldn't help being curious as to what could be the extraordinary nature of my real self.

"Jin Mi was born at the first descent of the winter frost, she can grow flowers and summon water, her basic nature is "yin" winter, her real self is a six-petalled frost flower." 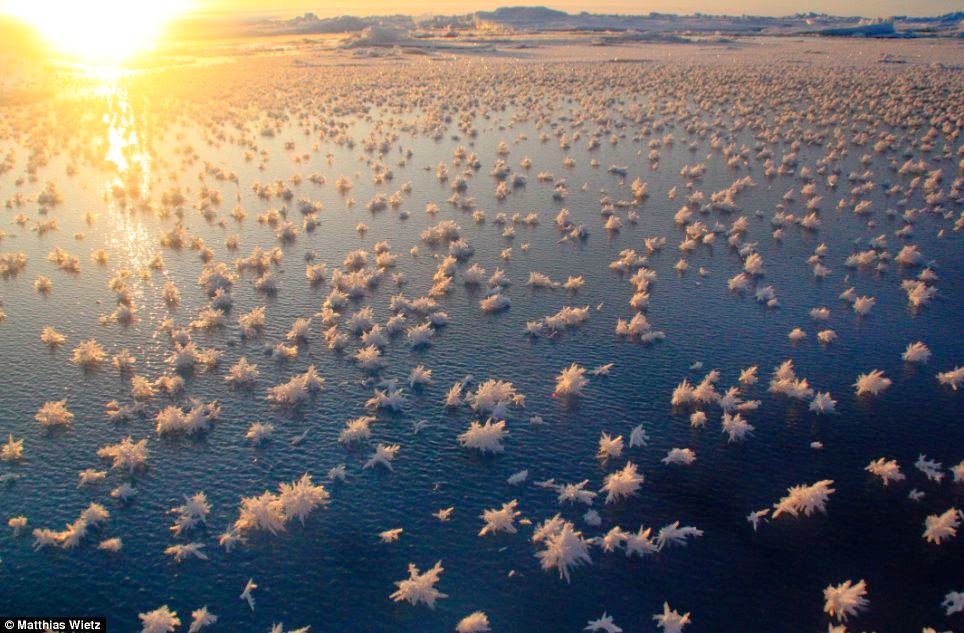 This truly caused one to be depressed to the extreme, the frost flower descends in the night and disappears with the sun, it comes and goes without a trace, light and airy, it looks like my life would be very fragile and thin, I must as well be a grape stem which is round, substantial and rich-looking****.

The Heavenly Emperor also appeared to be depressed to the extreme, he was like me, our faces appeared like our dreams had been destroyed.

"Tomorrow morning, the Liu Zi pond, wait for me," A low command floated to my ears, the voice sounded very familiar. I was surprised, I lifted up my head, I only saw Phoenix's long and narrow eyes staring at me, turns out he had secretly sent a message to me, I wondered how he did that.

"The flower of the descending frost? Jin Mi Immortal....." Night appeared as if he could not understand, "May I be so rash to ask as to what is the meaning of the great god's words?"

Daddy calmly looked at the Night, without any tremor or ripples, he did not say anything.

* This indicates a cough in chinese.
** Haha, I love this. Phoenix is so transparent at times.
*** Night, cryptic as always. I love that sunrise appear to symbolise Phoenix (golden boy, rising sun) while Night is what dominates after the sun sets.
**** Haha, most girls would love to be a flower as romantic as this - a flower that is so rare and precious, that you need fate and time to see. But not our dear Jin Mi.

Comment: We are so used to seeing our happy shameless grape stem Jin Mi, will everything change now as Jin Mi moves closer and closer to her real self? So it turns out she is the fragile and beautiful six-petalled frost flower... the flower that was given birth at the first descent of the winter frost. The snow and flower - both are such beautiful and ephemeral things, I suppose we can't blame Jin Mi for sighing that she must have a thin and fragile life. Jin Mi reminds us again and again, that she is no poetic beauty, she does not want to arrive at night and disappear by morning, she wants to live substantially, she wants to be felt! Perhaps that is why however shameless she is, I too root for her happiness.