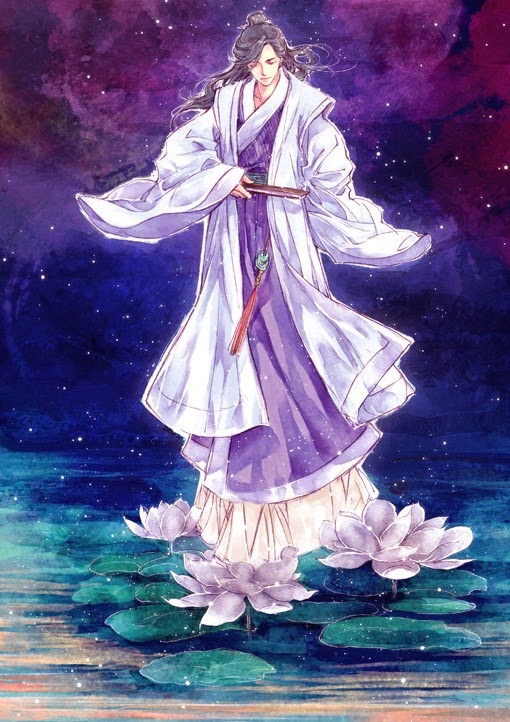 
The above picture is perfect! The idea of the Water God standing on water lilies that were Zi Fen's real self.... awww, I really like this couple. So, shall we finally learn what happened five thousand years ago?

Chapter 12: The Flower of The Descending Frost (Part 1 of 4)

The Water God lowered his head to gaze at me, the clear lake in his eyes started to ripple up in waves, a row of tears fell out of his eyes and landed on my sleeves, "Jin Mi, you have suffered... I owe Zi Fen, I also owe you as a father, even if you do not want to recognise me, I will not fault you..." Although he spoke like this from his mouth, he tightened his embrace around me.

I obediently leaned on his shoulder, I did not struggle, I said in a melancholic tone, "It's not that Jin Mi does not want to recognise, but Jin Mi's divine energy is low, even if I bluff myself to believe, how would the Water God convince the world that Jin Mi, a fruit sprite, is a descendant of the Flower Goddess and the Water God? If one cannot convince the crowd, there will definitely be problems later."

I looked over the Water God's shoulder and saw the Flower Leader furrowing her brows and glaring at me, I rubbed my nose and hid in the Water God's embrace. As the Water God hugged me, he appeared very happy, he lovingly stroked the top of my hair and said slowly, "Jin Mi need not worry, your divine origin was covered by a seal by Zi Fen, so your current self is not your real self, Father will go to the West to ask the Buddha to unseal your true self."

I've been alone for four thousand plus years, and never felt that I lacked anything, but having him hugged me so lovingly, I was dazed, I only felt that even though it was snowing outside, it was as if the whole of spring had shrunk into this warm embrace. I unconsciously gave a faint smile at the snow that was falling outside, a small yellow flower slowly grew out from the layers of snow, stubbornly blooming against the cold winter wind.

I softly murmured the phrase, slowly repeating it in my mouth, "Fa.... Father..."

Suddenly the spring breeze came, the white snow that had covered the sky and ground disappeared without a trace, there was only a bright clear sky, everywhere blossomed with flowers.

"Jin Mi... Obedient Jin Mi..." The Water God opened his mouth again, his voice trembled as if he could hardly suppress his joy, "As long as Jin Mi likes, don't even speak of divine essence, even if Father has to give his all, why not?"

Don't attack strongly, ask as if you are weak - the Moon God's words were all true, this was a killer move against all men, regardless of age. I couldn't help secretly rejoicing at this.

"But Jin Mi's body has a great amount of "Yang" fiery energy, where did this come from?" The Water God changed the topic, his voice full of worry, "To untie the bell we need to find the person who tied the bell, right now it's critical to get the person to take back the energy he gave you."

"Yang fiery energy? Unless it's the energy the Heavenly Emperor gave me last night?" I blurted out.

"The Heavenly Emperor?!" The Flower Leader glared at me, "Yu Lan! Weren't you guarding Jin Mi last night, what do you have to say?"

The Flower Leader Yu Lan knelt down before the tomb. I anxiously said, "This has nothing to do with Flower Leader Yu Lan, the Heavenly Emperor summoned my soul to an illusionary realm, and conveniently passed me five thousand years of divine energy."

"What did he say to you?" The Flower Leader looked at me menacingly, I shrank in the Water God's embrace, but saw the Water God was deep in thought.

"He said.... he said... He said he was also my father," I swallowed my saliva and finally managed to spit it out, the Water God froze.

"What a joke!" The Flower Leader coldly smiled, the other twenty three flower leaders were also furious. The Little Flower Leader Ding Xiang looked like she could not wait to peel off his skin, "If not for him! Why would our master's soul annihilate and die with such hatred?! To say he is the enemy who killed your mother is also not to malign him!"

"Ding Xiang!" The Flower Leader wanted to stop her but it was too late.

"What did you say? Ding Xiang, what did you say?" The Water God spoke, his face a sheet of white, his fingertips could not stop trembling, "How did Zi Fen leave? It has been four thousand years, how long more do your planned to hide it from me?"

"How did our master go? Speaking of which, the Water God also played a part of it! Today even if I am breaking my vow and will have to destroy my divine origins, I must tell the truth to Jin Mi!" The Little Flower Leader Ding Xiang pushed away the Flower Leader, "All men in this world are fickle! Now that Jin Mi has grown up, one by one they come to ask to be Jin Mi's father! Do you know that our master to protect this child used her entire cultivation? Yes, I may be blur, but how about the Water God? When Jin Mi was born, when our master closed her eyes, that was when the Water God married, you have not even had the chance to enjoy your current peach blossom, when will you have the time to reminisce your old lover?"

The Water God's whole body shook, as if he had been struck by thunder, as if cold wintry water had been drenched upon his head, his embrace around me loosened, he rose up, "It was the heavenly date, twenty eight thousand and six hundred and twelve first descent of frost.... it was not the heavenly date, twenty eight thousand, six hundred and thirteen summer, did the Flower World hide the death of Zi Fen for a year?" The Water God looked like he was going to lose his soul, he murmured to himself, " Zi Fen said she never liked me.... she only had feelings for the Heavenly Emperor.... she forced me to marry Lin Xiu**..."
Little Flower Leader Ding Xiang covered her face, she cried dejectedly until no sound could be heard.

"The twenty four flower leaders had sworn to our previous master that year, the Water God should not press them anymore. What happened that year, I happen to know a little, would his greatness be willing to listen to me?" A round red shadow appeared in front of Little Flower Leader Ding Xiang, I looked carefully and realised it was the usually eavesdropping Old Carrot Immortal.

The Water God did not speak, his silence was unnerving.

"That year, I think the Water God knows even better than I how the Heavenly Crown Prince had wooed and tricked to gain our previous master's heart. However, before the previous Heavenly Emperor had passed on, he had already arranged to marry the bird tribe's princess as his wife. At that time, the six realms were in chaos, in order to stabilise the situation, the Heavenly Crown Prince carried out the marriage with the bird tribe to subdue the demon world which wanted to rebel and take over the throne. The previous master was emotionally hurt by this. The Heavenly Emperor did not change his philandering nature even after he ascended to the throne, he still bothered the previous master and wanted to make her his concubine. The previous master refused and indicated she no longer wanted to meet him."

*I thought I would comment that when I use "the Flower Leader" and mention no specific name, I refer to the Head Flower Leader.
** Lin Xiu probably refers to the Wind Goddess.
*** Now that the secrets are being revealed, I can shout out the heavenly emperor is SUCH A SCUM BAG. Ugh, I hate him.

Comments: I thought it was rather cute how the speaker of truth becomes the ever eavesdropping nosy Old Carrot Immortal! Hahaha. I also liked the quiet but strong imagery of the yellow flower stubbornly growing out of the snow --- Jin Mi is in all practical sense an "orphan" and she not only lost the chance to experience maternal and paternal affections, but she was fed the Unfeeling Pill when she was born, depriving her of ever learning and feeling emotions.

Jin Mi thinks that her journey is to gain more cultivation so she can become a god, and she wants to become a god simply because she no longer wants to be trapped within the Water Boundary. But little does she know that Heavy Sweetness is perhaps her journey to find her heart.