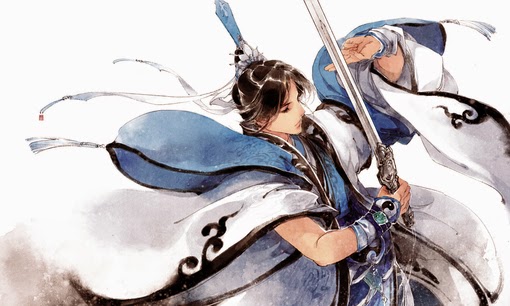 *Translator's Note: I've come to realised that I mistook Qi Feng Xiang (翔) with Yu (羽), hence his name is Qi Feng Xiang and not Qi Feng Yu. My bad! The first version I looked at when I summarised the synopsis had the wrong words. I've corrected all the names now :).

Su Li Li has a little protector of her own even as she has to face the demons of her past. But, as the past extends its sharp claws towards her, will she be able to maintain the peace she tries so hard to keep?

One night, deep in the winter, Su Li Li felt something heavy in her heart, she awoke to see a shadow. In her room, she sees the man who she saw killed another man in the wilderness when she raided a tomb (see Scene 2, he is Qi Feng Xiang's subordinate). Su Li Li calls this person claw-face.

Scene 6: I just wish for you a lifetime of peace

She cries "ah----", just as claw face was going to stretch out his hand towards her, at the same time, a firm strength pulled her to the back. A shining object pierced forth from the back to the front, claw face was forced to retract his hand. Su Li Li felt her waist tightened, and herself being pushed back, when she finally stood firm in the yard and her consciousness returned, she saw that Mu Tou was already fighting with claw face under the moonlight.

Mu Tou had the advantage, each stance he took was a winning one, he could attack and he could defend. Claw face attacked forth with many strokes, but Mu Tou could easily returned them, he was winning purely by sword stances.

In an instant, claw face saw a gap and struck a punch towards Mu Tou. Mu Tou did not recede, he cut the sword edge down and coldly said, "Retract."

If he did not retract his move, he would definitely harm Mu Tou's blood vessels, but if he did so his hand will also be gone. Although claw face's move was quick, he had steadily retracted and quickly hid his killing intent, but he looked at Mu Tou as if he saw a ghost, after half a moment, he said, "Your stances are brilliant but you lack internal energy, you can't beat me."

Mu Tou did not rebut this, he simply said, "This is the third time you have come. If you come again, I will not show mercy." His hand returned to his body, the sound of the sword blade slashing the wind clearly showed his determination.

Su Li Li tightened her clothes, seeing the two standing opposed to each other in the yard. A murderous intent started to spread in the air. The night wind blew across, blowing some strands of her hair that had fallen astray, but claw face's sleeves did not move, as if he was thinking if he should attack, or not?

Su Li Li always dared to break a stern atmosphere, seeing this stagnant air, she stood behind Mu Tou, leaned her head out halfway and tried her best to firmly asked, "What are you looking for? If you are looking for something, tell me, I'm most familiar with things around here."

Claw face swept his eye across her, he told Mu Tou, "I recognise your martial arts. Today I will not fight with you to give your teacher (shi fu) face". After finishing, he leaped out of the yard, as if he was a bat in the night.

Su Li Li felt a little aggrieved, "Eh - I was talking to him, why did he ignore me?!"

Mu Tou didn't even look at her, "cha" he kept his sword in the scabbard and said, "If you keep hiding behind me, how would he be able to look at you."

He turned to face Su Li Li, "That time when you came back from Ding Po (the tomb raiding), he also followed you. The previous two times he was also searching in the library. My leg injury hadn't healed then so I did not disturb him."

Su Li Li was surprised, "I nail coffins, I pry coffins, but I have never met such an instance."

"You know what he is looking for," Mu Tou said it simply, as if he was speaking an unassailable truth.

Su Li Li hesitated, "I.... actually... I'm not sure. But at Ding Po previously, as I was waiting for brother Mo Da to relieve himself in the wilderness, I accidentally bumped into claw face cross-examining a small eunuch, saying he wants to find something."

Mu Tou examined her face, after being silent for half a moment, he said, "If you don't want to say, you don't have to. I can tell he will not give up so easily."

Su Li Li was uncomfortable when she heard this, what was he saying, was this a soft threat? "What I don't want to say, I even told you my name but you haven't even let me know your name."

Su Li Li was speechless and exposed her eye whites at him (giving him a contemptuous look).

Mu Tou raised his sword and turned to walked off. She grabbed him, "Where are you going?"

"Going back to sleep! Soon the morning will arrive."

Mu Tou stiffened his face and did not listen, Su Li Li cried, "Mu Tou, Uncle Cheng went out to get materials and is not back yet, there is only you left in the yard. If that person comes back and kill me, if you are just slower by one step, I will be done for."

Mu Tou turned back and sat on a stack of wooden boards, "There is someone behind him. If his master does not say to kill you, he will not kill you."

Su Li Li hopped over, she climbed the stacks of wooden board which was half the height of a person then leaned her back onto the wooden materials, "How do you know there is someone behind him?"

Mu Tou sat further back in, hugged his knees and said deeply, "You said he was cross-examining a small eunuch previously. Since it relates to the internal affairs of the imperial palace, this is not a matter relating to the jiang hu (the pugilist world). Since he is not royalty or an official, he must be working for someone."

Su Li Li fell into deep thought then said, "Do you know any big official with the surname Qi?"

"Not currently in the imperial palace."

"You Zhou.... yes, there is a general called Qi Huan Cheng."

Su Li Li coldly laughed, "Then it must be You Zhou's Qi Huan Cheng."

Mu Tou coolly added, "This person is fifty plus years old, three years ago he was transferred to You Zhou to defend the north, he is a good general."

Mu Tou did not speak, Su Li Li bent in her knees and sat by Mu Tou's side, though it was a bit cold, she felt very safe. As her heart steadied, she felt sleepy, in a moment, her head was nodding off. Mu Tou moved slightly towards her and lent his shoulders for her head. Su Li Li moved across and her whole body leaned against Mu Tou.

When the sky was almost lit but not lit yet, the air seemed to have a low sound, as if it came from the ground, there was no sounds of humans, as if time had reversed, and one did not know where one was. Such a time, seemed to be separated from life itself, with no relation to the past or to the future. Mu Tou steadfastly watch as the sky turned white, with a glimmer of gold at the sides.

When the first rays of sunlight entered the yard, Su Li Li moved, her eyelashes slowly lifted, her head was leaning on Mu Tou's shoulder, her back was pressed on the stacks of wooden material, her body was covered with a light blanket. Her heart knew that Mu Tou must have covered it on her while she was sleeping, she folded it, her heart was a little empty, and yet a little full, there was a pleasure she could not express, as if she had been shined by the sun until she felt lazy. As if she had sat and leaned for a very long time, longer than the time she even knew.

The air was a little cold, she did not move and leaned on Mu Tou for a while, then she finally lifted her head to see him. Mu Tou's face was facing the sun sidewise, the light reflected the contours of his face, he was gazing at the eaves of the roof, he had a gaze that look beyond wealth and fame.

Su Li Li also looked at the eaves of the roof then she laughed, "Why? Does the roof eaves have money?"

Because she just awoke, her voice was a low and hoarse, but it added a kind of fresh sweetness.

"Then what are you looking at?"

Su Li Li lazily rose up, "And with such an expression."

"Last year, on this day, you threatened me, you said if I died here you only had a thin skinned coffin for me."

Mentioning of this, Su Li Li suddenly realised that Mu Tou had stayed here for a year already, her heart reflections started to overflow and expand. She gazed at his side profile. In this year, Mu Tou has grown quite a bit. Every time she raised her head to speak to him, unconsciously, every time the angle at which she gazed has grown. Mu Tou looked at her and asked, "What are you looking at?"

Su Li Li lightly sighed, after thinking for a while, she placed her hand on top of his hand, softly she said, "I only wish you a life of peace, may you never be like last year again."

Mu Tou was silent for a moment then said softly, "I also wish you a life of peace, may you never be like last night again."

They mutually exchanged a glance and smiled.

"I have a sister, she's stuck in a brothel. No matter how much money I save, I can never redeem her out. I was thinking... you could bring her here."

Su Li Li hesitated for a while, "Let's wait a few months. I'm worried for your leg injury... I will tell you then."

Mu Tou was about to say something when the back door sounded, Su Li Li listened for a moment and cried happily, "Uncle Cheng is back."

Mu Tou jumped down the boards, he reached his hand to Su Li Li, "You can cook, I will help Uncle Cheng bring in the wood materials."

Su Li Li hugged the blanket, leaned on his hand, and jumped down the boards.

They each busily went on their ways.

Comment: I have to confess that my heart just about died by the end of this scene. It's the kind of soft silent protective love that really gets to me.