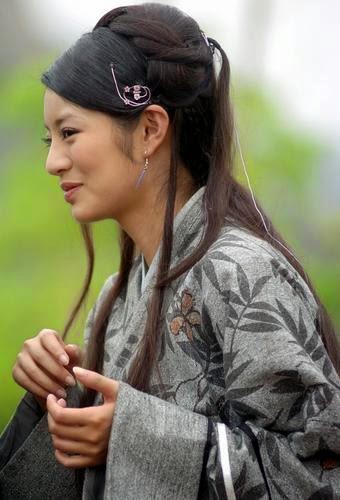 If Liu Shi Shi is Jin Mi, Ariel Lin is A'Heng, then Ady An shall be Su Li Li. Because, I think Su Li Li is pretty, but not the kind of beauty that topples nations, I imagine she has a soft kind of beauty, that's clean, comfortable and always tinged with a light wistfulness.

From Scene 3, a month has passed and Mu Tou has started walking without the board on his leg. On a rainy day, Li Li asks Mu Tou to accompany her shopping down the streets. She buys two handsome outfits for Mu Tou, and then receives the most beautiful female robes she earlier ordered from the clothes shop. As they leave the store, Mu Tou tells Su Li Li that the female robes suit her. She laughs. That day was the seventh day of the seventh month (commonly known as Chinese Valentine's Day and the day the Cow Herder meets the Weaving Girl (read this Heavy Sweetness entry to learn more about the legend)), after dinner, Su Li Li takes the wrapped up beautiful female robes and heads out.

She has come to the most famous brothel in town. She is here to visit her sworn sister, her previous maid, Yan Huan, who was mistaken as her (see summary here for full details) and forced to become a prostitute. She meets Yan Huan and says, today is the seventh day of the seventh month, our birthday. Yan Huan is cold to her, but is slightly warmer when Li Li gives her the wrapped up gorgeous female robes as a present. Yan Huan asks why Li Li still dresses up this way when she is fifteen. Li Li tells Yan Huan that the Emperor is now too busy with his own troubles, she has saved up money and will try and redeem her. Yan Huan laughs bitterly at Li Li - at her age, what is there left to redeem? At this point, Yan Huan's client arrives and she tells Li Li to leave.

Li Li meets the client on her way out and it's the brocade robed gentleman in white! He catches her and asks if she leans both ways (since she previously said she was brokeback but now is at a brothel!). Li Li admits she is a girl to visit Yan Huan, her sworn sister. The gentleman refuses to let Li Li go until she tells him her real name. She tells him her name is Su Li Li, Li from the phrase "going away". Qi Feng Xiang tells Li Li his name and tells her to remember it. Li Li quickly leaves.

Su Li Li comes home in all anxiety. She starts to walk around the courtyard and wonder how many more orders she has to finish......

Su Li Li turned around, and gazed at the top of the yard wall, she was a little dazed, as if asking herself and asking him, "Where should I move?"

Just now at the Ming Yue Brothel, she was still quite composed, but now although her expression was peaceful, deep in her eyes she was like a bird that had narrowly escaped an arrow, hiding a deep fear.

Mu Tou stopped his knife, he lifted his eyes to look at her, calmly he said, "The beef stall at the opposite end of the street is good, if you want to move, move there."

The pine oil twigs exploded in a blaze of fire, its glow caused the shadows from four sides to flicker, in a moment, it exhausted itself on the ground and the flame extinguished. It was dark, the yard a sheet of black, even those who had sight was as good as blind*. As if she could not find the direction, Su Li Li hesitated for a moment, then moved towards the back of the small yard, as she walked two steps, she felt her arms tightened, Mu Tou grabbed her.

She turned her head, in the darkness her eyes finally concentrated on Mu Tou's face. Mu Tou stood up, held one of her hand, "Where are you going?"

Su Li Li lowered her head and thought for a moment, she said lightly and quickly, "I don't know, I must go, they have found me."

"Who have found you?" Mu Tou asked gently.

Mu Tou's question rolled around Su Li Li's head, who had found her? With this reflection, Su Li Li suddenly felt her head clear a bit, her eyes not so terrified, but she did not speak, just let him knead her hands, as if her heart needed that strength and warmth to support her.

Mu Tou was silent for a moment, then continued, "Was it the person you trifled with at the previous tomb incident?"

"What did you do to offend him?"

"I won't ask. But for many things, it's useless even if you are afraid. So why be afraid?" Mu Tou pulled her other hand and held it in his palm, "At the beginning when you saved me, did you think of being afraid? You said if I was found by my enemies, I cannot blame you. But did you ever think, if my enemies came here, it's not I cannot blame you, but you can't blame me for harming you."

Su Li Li opened her mouth, even though her heart knew it, she could not say why. Knowing clearly that saving him was dangerous, but she still saved him.

In the darkness, Mu Tou's eyes shone, and he laughed, "Since you weren't scared then, now you don't have to be afraid. No one in this world can beat us, the only people who can beat us are ourselves."

Mu Tou never wasted his words, what he said never lacked logic. Su Li Li looked at his eyes which shone like the stars, her heart scolded herself: How could I think that Qi... Qi Feng Xiang was more good-looking than Mu Tou, Mu Tou was clearly more handsome than him by a lot. Then thinking that he said "us", although he was speaking generally, thinking about it carefully there was a trace of intimacy. Feeling that the warmth of his hand was especially comfortable, her face started to warm up, she lifted her hand and gave a not heavy but not light slap on her face, she scolded herself in her heart: Su Li Li, are you crazy!

Mu Tou saw that Su Li Li was no longer dazed, but her actions were even harder to understand, he was dazed for a moment, alarmed, then asked: "Jie Jie (elder sister), you... why are you so frightened, don't suppress it or you will become crazy."

Su Li Li escaped from his hand, she shook her head and said, "No, no, I was a little shocked today hence my head was unclear."

As the two of them struggled at this point, the house door open, Uncle Cheng held a candle, with a cloak around him, he stood at the door, he weakly opened his eyes and stretched his neck to look at them. He asked, "What are your talking about in this darkness?"

Although the candle glow was weak, it was enough for Mu Tou to see Su Li Li's red face, he was dazed, in that moment a complicated feeling arose.

The second time in the night she leaped away like a rat, and headed straight for her bedroom.

Mu Tou stood and watched her closed her door, he turned around and saw Uncle Cheng's old face reflected in the candle light, he didn't know why but he felt his heart grow sheepish. He lowered his head, picked up the carving knife and waste material, turned around, threw away the material, in his hand holding the carving knife, he walked straight to his bedroom.

Su Li Li leaned on the door, she didn't light the candle, comb her hair or wash her face, she closed her eyes and laughed, thinking that today she was really ridiculous. The youthful romantic thoughts of a fifteen year old girl, they don't belong to Yan Huan, but they also don't belong to Su Li Li. These peaceful moments were stolen from the fleeting years, even as her hidden worries were gradually dispelled they would suddenly return, as these went on repeatedly, she could not and would not dare to hope for more.

Comments: I know the first few translations are Mu Tou-centric. It's not my bias (I swear haha!) but the first third of the novel focuses on Mu Tou, the second third focuses on Qi Feng Xiang and the last third is the all out battle for Su Li Li.

*What I like about Qing Yao's writing is that the surroundings and environment of her characters often reflect their feelings - I love how atmospheric her writing can be... in Scene 2, when Su Li Li meets Qi Feng Xiang in the wilderness, where there is decay in the air, tombs are being raided, the wind is high, and there is a sense of potent danger, but Qi Feng Xiang glows like a flower that blooms in the night. What a contrast! Is he a murderer? But why is he so white and clean? And in this scene, when Su Li Li's heart is in a bind and blind, her emotional blindness becomes physical blindness as the courtyard falls into darkness. When she is lost and trying to find her way, Mu Tou reaches out to her and holds on to her. He clears her head and gives her strength.

Isn't the end lovely when in the faint candle light, Mu Tou sees that Su Li Li's face is red. A complicated feeling is born in his heart. But, when Su Li Li rushes back to her room, closes her door, she tells herself that these feelings are an extravagance she cannot afford.

Su Li Li thinks she is crazy tonight. But, maybe instead of her mind, she might have lost her heart.