Heavy Sweetness Ash-Like Frost: Translation (Chapter 11.4: Where Does the Origin of Water Lie?) 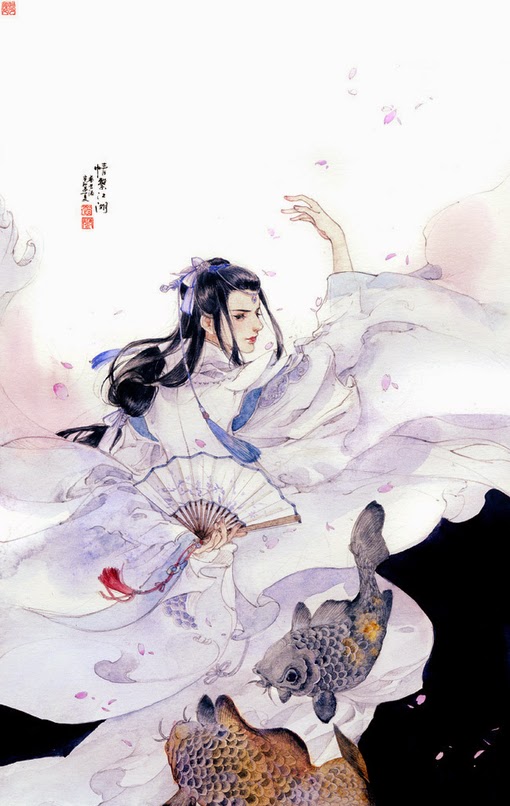 Hello Heavy Sweetness fans, we have finally come to the end of Chapter 11 and as Chapter 12 begins, we will finally move into the second half of the book. If you have found this novel sweet and light so far, from the second half onwards perhaps you will start to feel the weight of this sweetness.

I've often talked about speeding up Heavy Sweetness translations and now I'm going to "walk" the talk. The thing is because of the way I divided Heavy Sweetness chapters when I started translating, it actually slowed its pace as compared to Once Promised which has smaller splits in chapters depending on whether it is half summary or fully translated. So, I do feel like at times in my schedule, I need to push Heavy Sweetness along because I'm sure everyone has been waiting for the secrets to fall!

I was originally cold, being held by a snake I felt even colder, so I pushed away this snake.

The Flower Leader's eyebrows were actually standing upside down, she appeared to want to rebuke Master Pu Chi, but after seeing me push him away, her expression warmed.

Master Pu Chi fell back two steps, he clutched his heart and said, "My weak heart...."

The Water God's expression was profound and difficult to read in the midst of the descending snow, in the middle of his eyebrows there appeared to be a sadness like a deep lake, the depths of which cannot be measured, a snowflake melted on his cheeks, it melted into a drop of tear and slid down his cheek, he lightly opened his mouth, as if there were a thousand things to say but only a hundred languages, finally they culminated into one line, "Jin Mi has summoned this large storm of snow, what does Flower Leader Mu Dan think of this?" His voice seemed to choke.

The Flower Leader's face was shocked, as if someone had stolen ten thousand years of cultivation from her, but she closed her lips tightly and did not respond to the Water God's question. Master Pu Chi's face was deep in thought, it was rare to see that he has kept his usual smile from his face.

I could not be bothered with their secretive hinting to each other, I only felt extremely pleased, I a mere grape stem was now able to summon snow, the time for me to ascend into godhood must be soon!

The Flower Leader appeared to be uncomfortable by the stares of two pairs of eyes and finally said, "I am only a small flower goddess in the Flower World, does the Water God not know his own matters and require someone else to explain it to him?"

With this, the Water God's face seemed to be covered with a blush, after half a moment, he said, "At that time, Zi Fen and I......"

The Water God stopped midway and Master Pu Chi appeared to have realised an incredible secret, he made a respectful gesture to the Water God and indicated that he will be leaving. Before he left, he told me, "Jin Mi, my maiden, Yan You will cleanse himself and come visit you again." The Flower Leader glared at him.

After Master Pu Chi left, the Water God continued, "My feelings for Zi Fen, while our feelings were deep, our feelings developed only till the point that propriety permitted, we have never had any physical intimacy, so how could it.... but Jin Mi is able to summon the Water Gentleman Yan You, she can also summon snow, if she has no ability to control water, how can these be explained? In the whole heavens, besides me, only the dragon tribe is able to control water, yet Jin Mi calls herself a grape stem..." The Water God hesitated, he earnestly looked at the Flower Leader, "The only one who can solve this riddle is the Flower Leader. I seek guidance from Flower Leader Mu Dan."

The Flower Leader dejectedly let out a sigh, she lovingly swept away the grass stains on my robe sleeves, using a voice that almost could not be heard, "At first I thought Jin Mi's blur personality was her natural self, now I realised that there was an origin to it." She lifted up her head and looked at the Water God, "But it's no use for the Water God to ask me, Mu Dan has things she cannot speak of, the twenty four Flower Leaders have sworn to the Flower Goddess, if we leak out anything, we must destroy our own internal essence. We seek the Water God's understanding."

Hearing the Flower Leader's words, piecing everything together, to think that I was actually a descendant of the Flower Goddess!

The truth will always be shocking! I swallowed a few mouths of saliva and suddenly felt my head ring with pain.

Suddenly I saw that the figures of the Water God and Flower Leader were starting to shake, they started to shake into two, from two into four, more and more shadows started to shake in front of me causing me to become extremely dizzy, something seemed to be erupting in my stomach. With much effort I waved my hand at them, "Stop shaking, don't shake, my head... so dizzy, so painful..."

The Water God quickly reached out his arm to catch my falling body, the Flower Leader anxiously used her vines to examine my pulse, her face changed, "Jin Mi's body's internal energy is in a mess, did the Water God give any divine energy to Jin Mi?"

At this moment, I felt a bout of strong energy become a sharp blade energy, cutting one side of my blood vessels. I shook, and descended into a mist of darkness.

In a few steps, the scenery changed, I walked forward and before me was a large open space. The crabapple flowers were blossoming, their petals fell all over, in the mist of clouds and fog, a lady elegantly sat, her hand held a stem of flower, she turned and smiled at me, "Senior, you have come?"

I was dazed, a tall and great figure brushed past my shadows, "Zi Fen, I have come." His voice flowed smoothly like the running spring water, warm like the spring breeze in the March mornings.

Under the crabapple flower trees, the two of them used the flower stems as swords, the female like the spring willow the male like the poplar, their sparring movements made out a sword dance, they had reached a stage of perfection. At the most exciting moment, the female lightly passed the side of the male, the male followed but the female suddenly turned around, her sword touching the male's shoulder blade, the male was completely unprepared, it hit his sleeping meridian and he fell to the floor.

So it was a secret move, I couldn't help feeling excited, I was waiting to see if the lady was going to kill or cut the male into pieces. But the lady, unexpectedly, after examining his whole body, infatuatedly gazed at his face for half a moment, her tears fell down her face faster than the flower petals from the tree branches, "Senior, for saving my life, Zi Fen can never repay you..."

So it turns out the lady did not want to take the male's life, only wanted to tease him a little. I squatted at a side with my hand on my cheek, I was prepared to watch how two people, one already fainted, will carry out the mutual cultivation*, when I suddenly heard a noise come through my ear.

"Jin Mi's body has too much fire energy, I do not know who gave her so much "yang" energy, this is in opposition to her basic "yin" cold nature. If not for our coincidental meeting today, I'm afraid her life would have been in danger." This person's voice held a few tremors, as if he was afraid of what could have happened.

Someone let out a long sigh, "Many thanks to the great Water God, if Jin Mi had met any mishaps, how would I answer to the Flower Goddess..." I could discern this was Flower Leader Ding Xiang's voice.

"Jin Mi... so she is my flesh and blood... in these four thousand plus years, I have not carried out any of my responsibilities, how can I accept these thanks?" The Water God's voice was full of self recrimination, he heartbrokenly said, "If Zi Fen's soul that has disappeared into the sky knew of this, how would I ever have the face to meet her!"

Hearing this, my body broke out in cold sweat, as if I realised that Fei Xu** was borne out of mutual cultivation from Phoenix and Night.

"The great god, I'm afraid you must have been mistaken, how can Jin Mi be your flesh and blood..." The usually eloquent Flower Leader Yu Lan could only speak in half spurts, as if there were some obstructions in her speech.

"You don't have to deceive me, all of you have sworn to Zi Fen so I will not make it difficult for you," The Water God stopped Flower Leader Yu Lan's words, he determinedly said, "I have examined Jin Mi's original essence, you can no longer hide it from me. I will only ask, was Jin Mi born when the first frost descended on earth***?"

The whole hall was silent, one could only hear the soft falling of the snow from outside the window.

"Indeed... Indeed!" The Water God's voice fell onto the ends of the bed, his voice was as if he had lost his soul and his spirit has fallen, "Zi Fen......"

After a long while, a soft and warm hand touched my cheeks, "Jin Mi, my daughter..."

I was shocked, why do I now have fathers everywhere, I picked up one yesterday, today I picked up another. Yesterday, the Jade Emperor gave me five thousand years of divine energy, I don't know if my new daddy today will be as generous.

Thinking of this, I blearily opened up my eyes, I innocently looked at Water God who was holding me in his embrace, I nervously said, "I'm afraid the Water God must have been mistaken, Jin Mi is only a low leveled sprite, borne of the sky, cared for by the sky, I have no father nor mother, as humble as an ant, how can I dare to reach the level of the Great God?"

* Eeks! Jin Mi, you almost watched what you were not supposed to!
**To be honest, I cannot remember who Fei Xu is, but I think he is one of Phoenix's servants at his palace that Jin Mi made friends with!
*** It's a period called "霜降" which is apparently the 23rd day of October - the last day of Autumn and the start of Winter.

Comments: I like the Water God a lot! Haha, I laughed also when the Flower Leader made the snide remark that she always thought Jin Mi was naturally blur, but now she realised Jin Mi must have gotten it from her father. But, shamelessness, ah I think that's all Jin Mi.